Singapore is a melting pot of cultures, and the clearest reflection of this diversity is seen through the country's expansive range of food options. Using a ubiquitous ingredient such as chicken as the canvas, a myriad of dishes can be conjured, with each one a unique expression of one's culture and heritage.

Whether the chicken is boiled with a secret blend of aromatics to pay homage to a Singaporean family's generational recipe, or deep-fried to a shattering crisp and served with a dollop of fragrant homemade Malaysian sambal, here are some Bib Gourmand addresses in Singapore praised by our MICHELIN inspectors because of their quality and very good value for money. If you have a hankering to tuck into some chicken dishes, you've come to the right place. 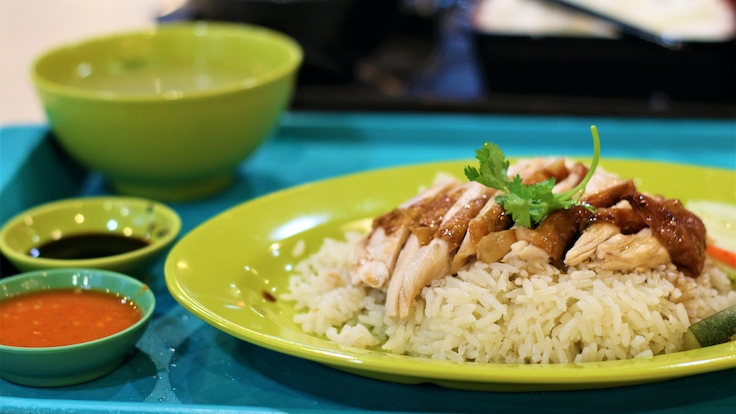 One of Singapore's most iconic local dishes, Hainanese Chicken Rice is prepared by stuffing the bird with aromatics such as ginger and pandan leaves, and then poaching it with seasonings. The rich, fat-laden broth from the chicken is used to cook the rice, resulting to glistening grains that are bursting with savoury flavour to complement the delicately prepared chicken. The dish is usually served with a small bowl of chicken broth, chilli, grated ginger sauce, and sticky-and-sweet kecap manis.

Tian Tian Hainanese Chicken Rice at Maxwell Food Centre is a hugely popular stall where one can get their fill, so don't be surprised to see a long queue, especially during lunch-time. If one happens to be in the quaint, heritage-rich neighbourhood of Tiong Bahru, our MICHELIN inspectors recommend Tiong Bahru Hainanese Boneless Chicken Rice, which is located at the neighbourhood market's food centre along Seng Poh Road. Lastly, Holland Drive is home to Sin Kee Famous Cantonese Chicken Rice, whose homemade grated ginger and chilli sauce are praised by MICHELIN inspectors. 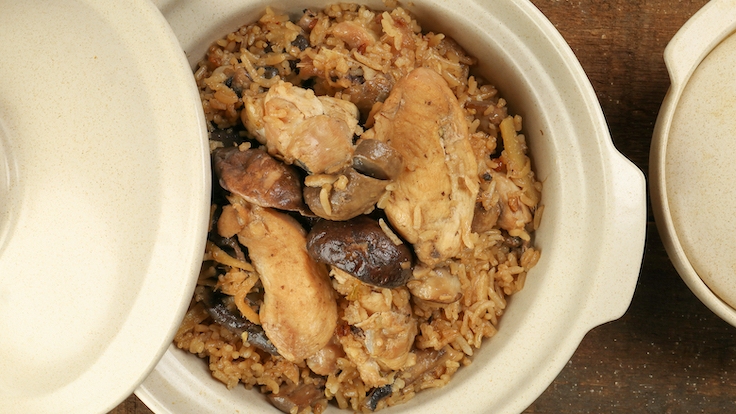 A meal that is cooked and served in a single pot has both a comforting and satisfying quality to it, and such an example is claypot rice. While it takes some time to prepare, each pot comes piping-hot, with all the ingredients' flavours melded together in a dark soya sauce as they are cooked under a lid. A much sought-after part of the dish is the crisped rice at the bottom of the claypot.

Commonly found in neighbouring Southeast Asian countries such as Hong Kong and Malaysia, our MICHELIN inspectors have recognised a couple of addresses in Singapore that have been awarded a Bib Gourmand accolade. Cooked-to-order with charcoal, Lian He Ben Ji Claypot makes chicken claypot rice, along with a preserved meat and an assorted variant. New Lucky Claypot Rice along Holland Drive is also a Bib Gourmand purveyor of chicken claypot rice, and as each pot is made to order, our MICHELIN inspectors recommend trying their long-boiled soups while waiting. 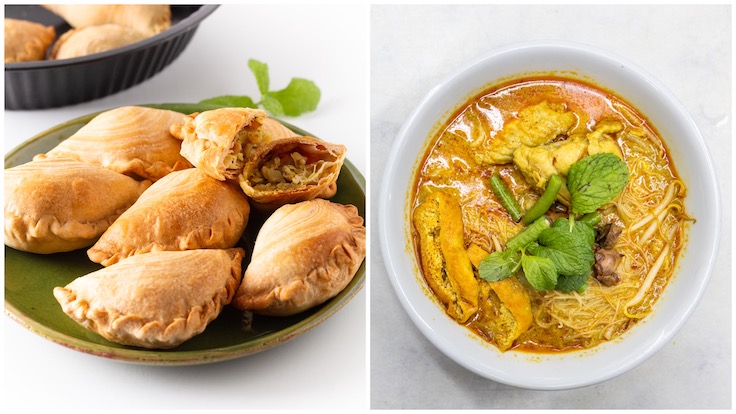 While different countries all over the world have their own versions of curry, Singapore's is known to have a touch of Malaysian influence. Using a spice blend made up of coriander, cinnamon, and fennel, among others, Singapore's curries can range from being yellowish to fiery orange in colour and with a spice-forward profile. In Singapore, there are three Bib Gourmand-recognised eateries that serve local-style chicken curry.

Praised by our MICHELIN inspectors for its robust curry broth that is well-cooked with nearly 20 ingredients, the chicken at Hock Hai Curry Chicken Bee Hoon Noodle is said to be delicious with an intense flavour. At Bukit Merah View, Na Na Curry's chicken curry is also said to be delicious.

A fondly enjoyed chicken curry-based snack in Singapore takes the form of a curry puff, and Bib Gourmand J2 Famous Crispy Curry Puff at Maxwell Road has been applauded by our MICHELIN inspectors, describing the chicken curry puffs here as "perfect". 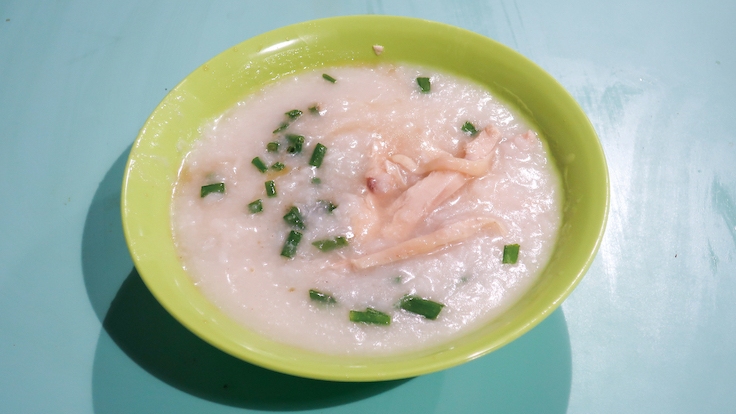 Apart from being paired with rice, chicken can also be enjoyed cooked in creamy porridges or steeped in herbal broths; the warmth of both dishes lend a touch of comfort to the soul. At Soh Kee Cooked Food at Jurong West, rice is simmered until it is broken-down and soft and is served with sliced chicken, with set meals for one to three people available. Ar Er Soup located at Jalan Bukit Merah offers 8 kinds of MSG-free long-boiled soups, including chicken, served with pumpkin rice. 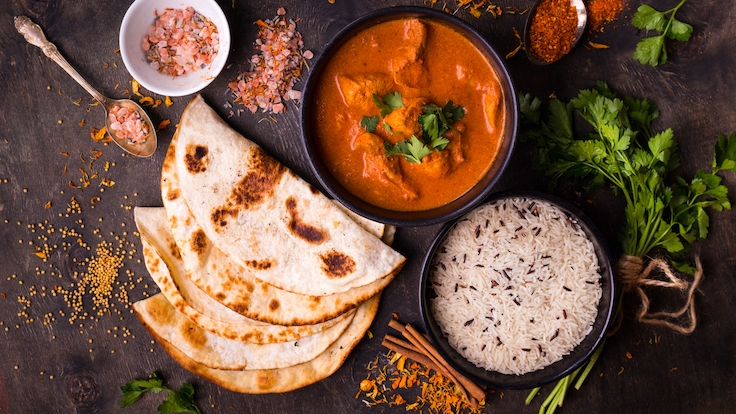 Singapore is also home to countless Indian restaurants that span a myriad of flavours, depending on its regional origin. At Muthu’s Curry (Little India), our MICHELIN inspectors describe the place as a "gem", as "Muthu" translates to "pearl" in Tamil. The tandoori chicken comes highly recommended, and the restaurant serves traditional dishes from both the Northern and Southern regions of India.

Located in the heart of the central business district, Anglo Indian (Shenton Way), according to our MICHELIN inspectors, serves chicken tikka masala, and it is a firm favourite of many. The Butter Chicken here is also a popular choice. If family-friendly Northern Indian food is preferred, our inspectors recommend Zaffron Kitchen (East Coast), where the cooking is conventional Northern Indian, with dishes from the tandoor being particular highlights. At Zaffron Kitchen, fresh ingredients are seasoned with the purest spices to great effect, and the popular set lunch on weekdays offers excellent value. 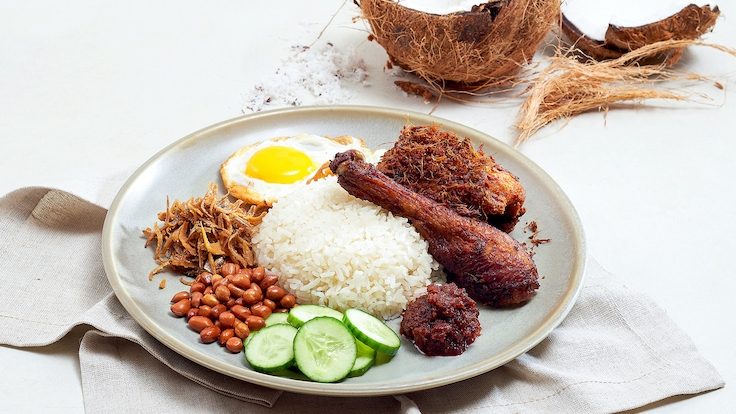 Singapore's cuisine is also deeply-influenced by both Indonesian and Malaysian heritage. With all three cultures being so geographically close to each other, it is inevitable there will be a permeation and adoption of flavours and ingredients. Such an example is Bib-Gourmand restaurant Hjh Maimunah (Jalan Pisang), which according to our MICHELIN inspectors has a menu that serves 70% Malaysian dishes and 30% Indonesian dishes. They say that the go-to dish here is the Sudanese Grilled Chicken, which is rooted in Indonesian flavours and spices.

For a chicken dish that is wholly representative of Malaysia, revamped The Coconut Club at Ann Siang Road is described by our inspectors as bigger and better, and with its authentic Malaysian cooking staying the same. The owner insists on importing coconut — a quintessential ingredient to this cuisine, and the signature deep-fried chicken leg bursts with flavour and the shredded chicken skin cracklings are simply addictive. 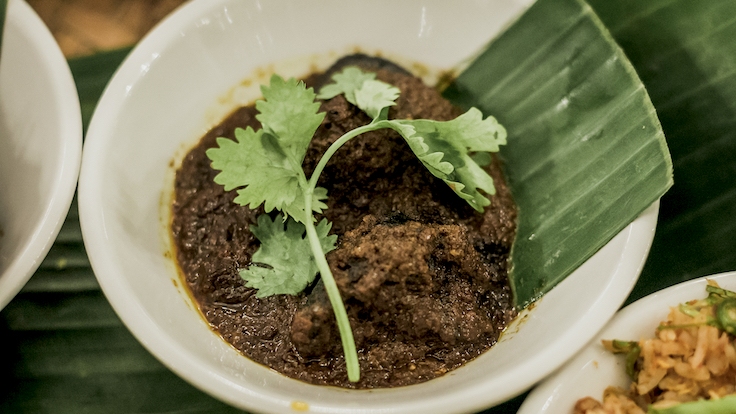 Nyonya cuisine, which is also known as Peranakan cuisine, makes use of Chinese spices in tandem with Malaysian and Indonesian techniques. One of the culture's most popular and distinct dishes is Ayam Buah Keluak, where chicken is cooked in a tamarind-based gravy and buah keluak, a fermented fruit that comes with an acquired taste similar to a combination of deep cacao and briny olives.

According to our inspectors, The Blue Ginger (Tanjong Pagar) is one of the most popular little gems in Chinatown known for its Nyonya dishes. Operating for over 20 years now, regulars keep returning for its aromatic cooking that delivers all the subtle and authentic Peranakan flavours. Another Nyonya spot where one can find a Bib Gourmand-worthy Ayam Buah Keluak is at True Blue Cuisine, located at Armenian Street. Our inspectors say that it feels less like walking into a restaurant and more like falling into the warm embrace of a much-loved family member. Here, it is all about nostalgia and paying homage to the food, history, and customs of the Peranakans where one can find all the classic dishes, prepared in an authentic way, and the hard part is narrowing down what to order. 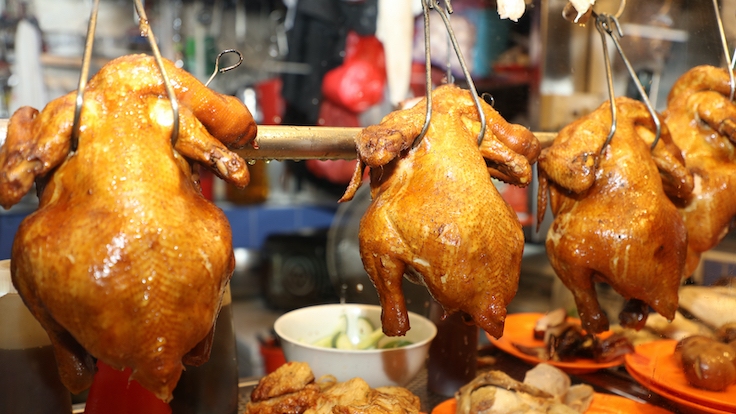 Another common sight in Singaporean hawker centres is the humble roast meat stall that boasts crackling slabs of pork, glistening barbecued pork, and steamed or roasted whole chickens displayed to tantalise the taste buds of passers-by. Recommended by our MICHELIN inspectors are Hawker Chan Soya Sauce Chicken Rice & Noodle along Smith Street in Chinatown, whose signature item is the reputable and delicious soy sauce chicken rice, and Ka Soh (Outram Park), which may specialise in fish soup, but whose shrimp paste chicken is also praised by MICHELIN inspectors. Shi Hui Yuan, which has been on the Bib Gourmand list for five years now, is also acclaimed by our MICHELIN inspectors for their hor fun — thin, smooth rice noodles and gravy with chicken or chicken feet toppings.
Advertisement
Advertisement

Singapore Food Trails: Out and About in Outram Park

One of the hottest locations in Singapore, Outram Park is a stone's throw away from some of the city's biggest names in food. Its vibrant nightlife and eclectic mix of both cultural and gastronomical gems makes it a must-visit area when making a trip to the Lion City.