Michelin is pleased to present the 2023 edition of the MICHELIN Guide Tokyo. 422 restaurants – 200 MICHELIN Starred and 222 Bib Gourmand – made it into the new selection, carefully crafted by the MICHELIN inspectors.

Among them, 2 new restaurants receive Two MICHELIN Stars, 16 new eateries are awarded One MICHELIN Star and 38 new establishments are highlighted with a Bib Gourmand. With 32 different types of cuisine represented – from international flavors to typical Japanese ones – this 16th edition dedicated to Japan’s capital city stands out for its diversity and authenticity.

“Once again this year, Tokyo's dining scene has been enriched by a diverse range of culinary categories and concepts. With 55 new restaurants receiving Two MICHELIN Stars, One MICHELIN Star or a Bib Gourmand in our selection, the 16th edition of the Guide perfectly reflects the dynamism of the city, as well as the never ceasing strive for excellence of its chefs. As a global cosmopolitan megalopolis, Tokyo is also known for its open-mindedness and its culinary contrasts, traditions rubbing shoulders with innovative food concepts and ancestral skills fusing with modern and international know how”, explained Gwendal Poullennec, International Director of the MICHELIN Guides.

“Meanwhile, the MICHELIN Green Star restaurants – to be highlighted as front-runners when it comes to a more sustainable approach to gastronomy – continue their efforts by sharing their virtuous ambitions with their teams and producers, and delivering their inspiring message to gourmets through their cuisine”, added Gwendal Poullennec.

Opened in April 2022, Myojaku directly joins this year’s selection with Two MICHELIN Stars. Here, Chef Hidetoshi Nakamura’s cuisine celebrates harmony, simplicity and purity, whether it be through straightforward flavors or concise and original presentations. The dishes express the richness of the best and seasonal Japanese ingredients, as well as Japanese water. Special attention to the sustainability of ingredients is observed by the chef when selecting produce. 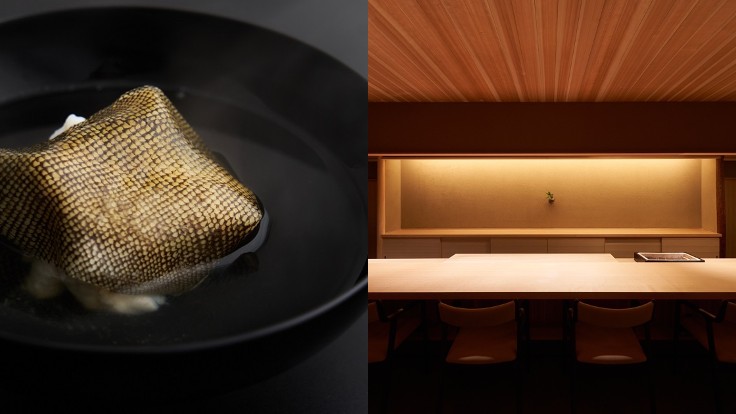 SÉZANNE has been promoted from One to Two MICHELIN Stars. Here, Chef Daniel Calvert concocts dishes which serve as a permanent gateway between gastronomic cultures and culinary techniques, and which are inspired by the chef’s international career. Among the most famous signature dishes, MICHELIN inspectors were particularly seduced by the poached chicken, a dish inspired by the Chinese drunken chicken recipe, cooked with Japanese gamecock and French vin jaune.

In addition to these 2 new Two MICHELIN Star restaurants, 37 others maintained their level of merit in Tokyo.

All 12 Three MICHELIN Star restaurants located in Tokyo also kept their distinction in this year’s selection. 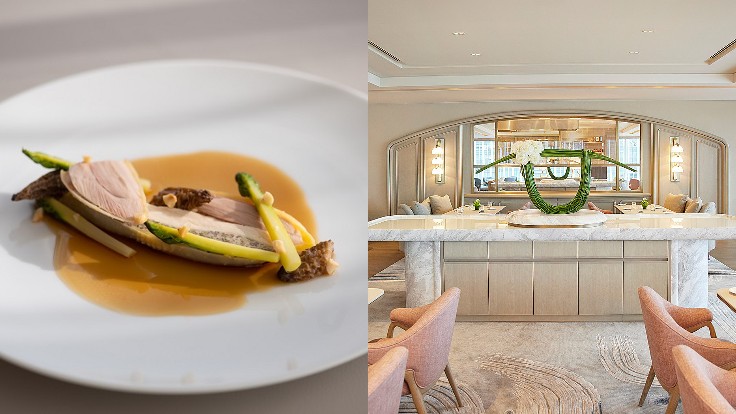 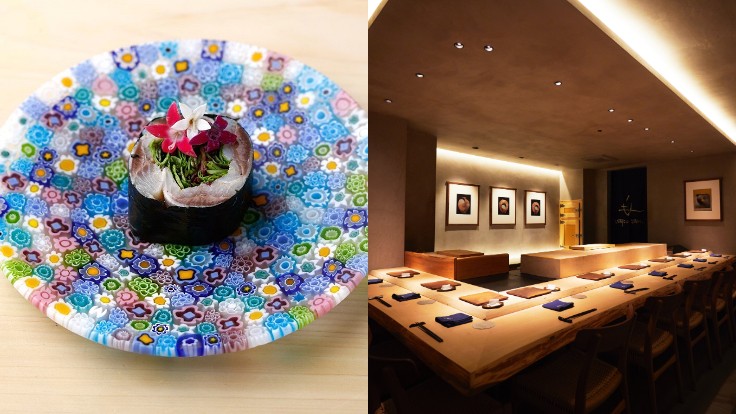 4 new sushi restaurants also receive One MICHELIN Star for the first time: traditional Edomae Sushi Hanabusa, which focuses exclusively on tuna preparations; the refined and highly personal Oku and Sushi Ichijo; and finally, the creative UDATSU SUSHI. In the latter, chef Hisashi Udatsu twists traditions with modern touches, adding new elements to sushi and imagining innovative toppings. Two types of vinegared rice are prepared to suit each type of sushi, and vegetables play a key role. The 'Herb Roll', which is served as a side dish with sake, and the 'Veggie Roll' are two representative examples. 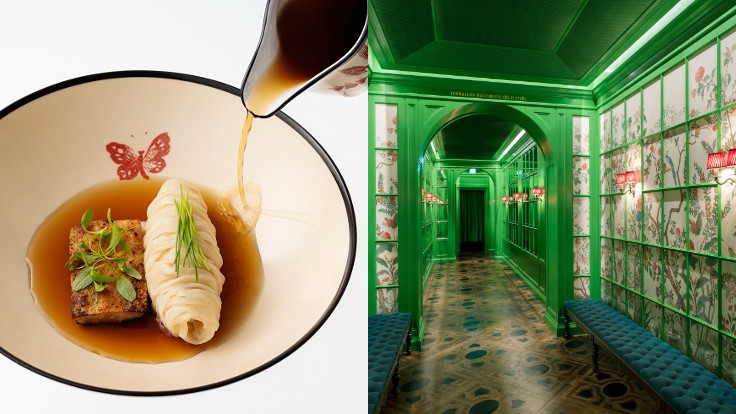 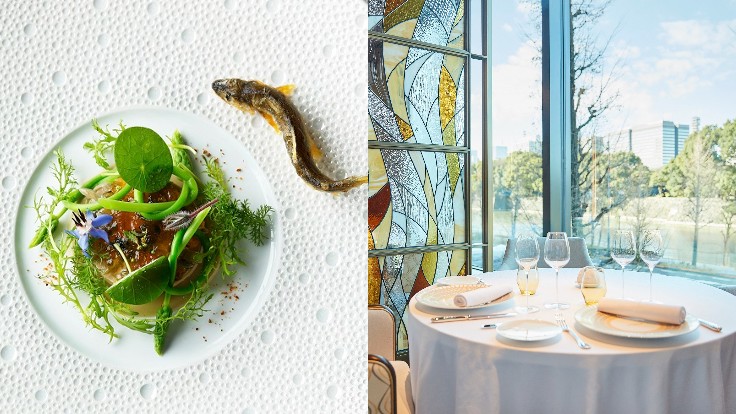 Comprising a total of 222 restaurants, the 2023 Bib Gourmand selection has been enriched with 38 new eateries featuring 14 types or categories of cuisine. Among them, 20 represent international cuisines, such as Indian restaurant SANTOSHAM, Sichuan-based Nogizaka yui, Italian AlCeppo, Spanish Flowers & Spanish Sonrisa or French Mono-bis. In the latter, gourmets will enjoy a new concept that incorporates French cuisine with Japanese set menus, such as the Bouillabaisse Gozen.

18 other restaurants highlight typical Japanese delicacies – from ramen to soba, sushi to tonkatsu, tempura to unagi and izakaya dishes. Tachigui Sushi Tonari, is a stand-up sushi restaurant where diners can casually drop in and order their favourite nigiri one by one, digitally adapted to modern needs. At ramen restaurant IRUCA TOKYO, the owner-chef discovered an original soup by researching synergistic effects with umami. Blending dashi from chicken, pork, shrimp and shellfish, he created a soup with layer upon layer of umami. The soy sauce is prepared with mushrooms and truffles, and the salt with ginger and spices. Kurobuta Tonkatsu Horiichi was opened by a couple from Kagoshima who moved to Tokyo to promote the appeal of local Kurobuta pork. The result is a unique tonkatsu restaurant that also mixes in Kagoshima ingredients.

With 12 restaurants maintaining their MICHELIN Green Star, Tokyo continues to demonstrate how local chefs and teams continue to put sustainability at the heart of their concepts. The MICHELIN Green Star, which is awarded to the restaurants within the MICHELIN Guide selection that stand at the forefront of a more sustainable approach to gastronomy, aims to raise awareness both within the industry and with all foodies, by highlighting inspiring philosophies and initiatives.

The MICHELIN Service Award and MICHELIN Mentor Chef Award aim to highlight the talent, know-how and passion of dedicated professionals who contribute to turning pleasant culinary experiences into unforgettable gastronomic journeys, or to positively developing the restaurant industry.

The MICHELIN Service Award, supported by Mitsui Fudosan, is awarded to Emi Hasegawa from restaurant Den. Emi Hasegawa unites together the service team and acts as a bridge between diners and the kitchen. She is committed to providing a personalized service to guests, and sometimes even chefs and cooks join in the service and enjoy the food. The owner supports Den's unique sense of togetherness and hospitality, and provides special moments for guests from all over the world.

The MICHELIN Mentor Chef Award, supported by Blancpain, goes to Hideki Ishikawa from restaurant Kagurazaka Ishikawa. Within the restaurants belonging to the Ishikawa Group, chef Ishikawa trains many young chefs and creates opportunities for them to become head chefs. He also pays attention to the sustainability of food and the natural environment. For example, all staff members participate in a rice farming experience project every year to pass on to future generations the importance of the connection between food and the climate.

The MICHELIN Guide Tokyo 2023 at a glance: