“Our teams of inspectors were particularly impressed by the level of commitment and by the creativity showed by restaurateurs in Belgium and Luxembourg, despite a particularly complicated year in 2021. With many new restaurants joining the selection, including, for the second consecutive year, one new Three Star restaurant, the 2022 edition demonstrates the culinary vibrancy and entrepreneurial audacity so typical of the local gastronomic landscapes. The personality behind the gastronomic concepts, the care taken in serving diners and the will to offer a more sustainable brand of gastronomy, are noteworthy trends which make Belgium and Luxembourg top-class European gourmet destinations”, stated Gwendal Poullennec, International Director of the MICHELIN Guides.

After four years with Two MICHELIN Stars, Tim Boury rises to the summit of world gastronomy this year. In his brick-built villa in Roulers, chef Boury’s meticulous creations combine classical depth and creative flair and make this establishment a mecca of contemporary gastronomy. An expert in exalting luxury products, the chef also concocts complex dishes where a full symphony of flavors and textures plays out, and where careful seasoning and original sauces come close to perfection. Lunch or dinner at Boury is always a delight for gourmets, who cannot fail to notice the welcoming atmosphere and thoughtful service provided by Inge, the chef’s wife who runs the dining room.

Once more, Belgium has three restaurants boasting Three MICHELIN Stars. Peter Goossens at Hof van Cleve (in Kruishoutem) and Viki Geunes at Zilte (in Anvers), both remarkably talented craftsmen, also offer their guests outstanding gastronomic experiences and are a daily source of endless inspiration for restaurant-owners.

The 2022 edition of the MICHELIN Guide Belgium and Luxembourg also welcomes three new Two Star restaurants, including some addresses which are already well-known to gourmets.

Chef Gert De Mangeleer and sommelier Joachim Boudens have breathed fresh life into the restaurant, Hertog Jan today located inside Anvers’ Sanctuary Botanic luxury hotel. The chef’s creative personality transpires in his excellent dishes, where technical precision seeks to serve the Asian flavors which the chef loves to work with. Yves Mattagne has made the refurbished La Villa Lorraine in Brussels reflect his own personality. With respect for classic flavors, which have made this legendary eatery famous, and with all the finesse and inventive subtlety which characterize this chef, the dishes created by Yves Mattagne and his team stand out for their daring flavors and careful preparation, such as the langoustine flambéed in sake. Like the last two chefs, Thijs Veryloet at Colette – De Vijvers, in Averbode, is also a devotee of the very best products. His sharp skills and the way in which he makes classical recipes into his own, are testament to his talent. In the magical setting of the De Merode nature reserve with its many lakes, this restaurant offers a memorable gastronomic experience. 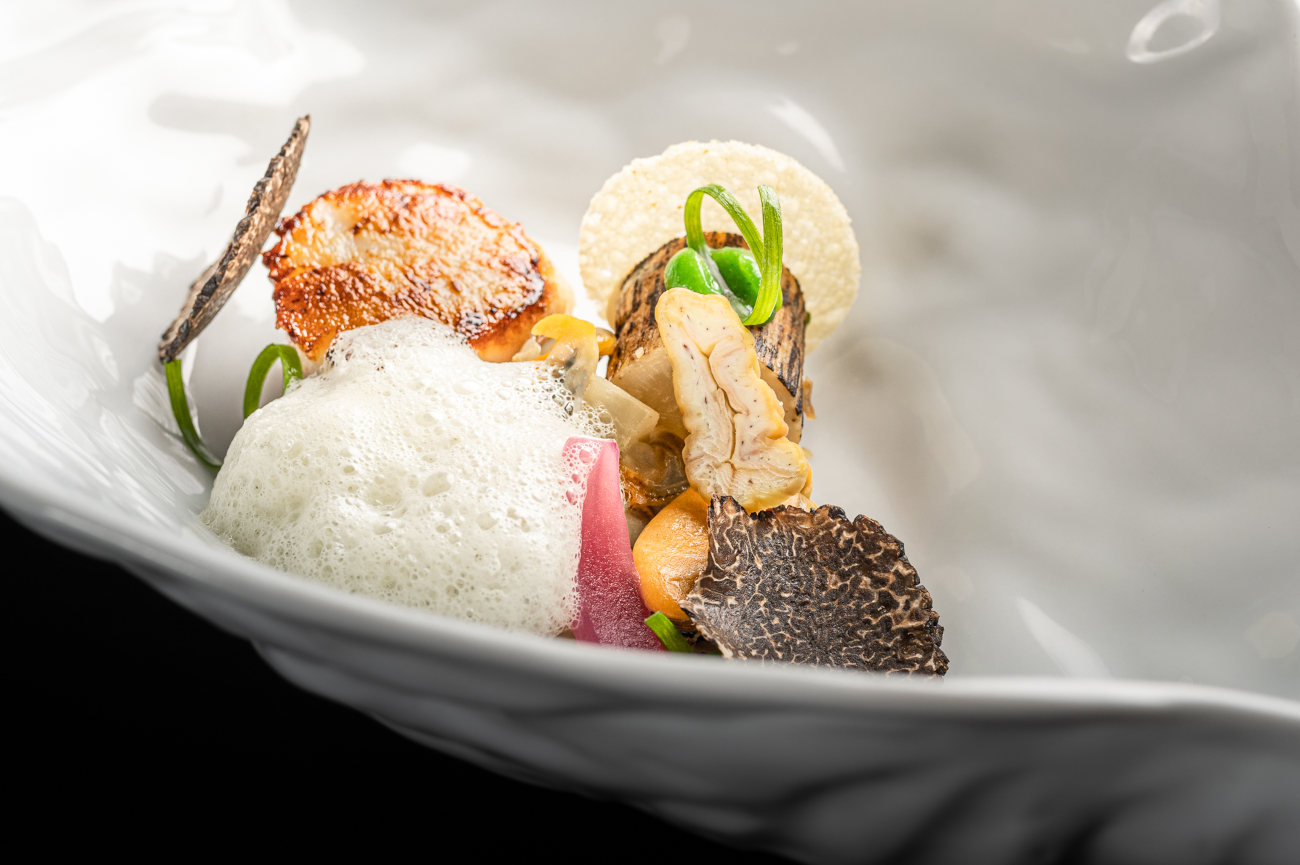 With no fewer than 16 restaurants earning One MICHELIN Star, the 2022 vintage stands out for its impressive number of new talents. Antwerp is, once again, well represented on the gastronomic map. Whether it is original creations with Asian flavors at DIM Dining, contemporary sophistication at Fine Fleur or classic generosity at Nebo, Antwerp offers proof that it remains a must-visit destination for gourmets.

The creativity of Martijn Defauw at Rebelle (Marke) is also rewarded with one Star, just like the originality showcased by Alex Verhoeven and his team at Hert in Turnhout. The highly personal cuisine of Ken Verschueren, at Tinèlle, in Malines, also greatly impressed the Guide’s inspectors, just like the fusion of Asian flavors and Nordic influences offered by Ruben Christiaens at Vintage in Kontich. Fans of sophisticated produce meanwhile, would do well to make a trip to In den Hert in Wannegem-Lede and Sense in Waasmunster. At Fleur de Lin in Zele and Aurum by Gary Kirchens in Ordingen, elegance and strong flavors characterize these two appealing eateries.

The intuitive cuisine at ¡Toma! in Liège takes us to Wallonia. Chef Thomas Troupin creates dishes which are close to nature, while regional produce occupies pride of place at Arden in Villers-sur-Lesse. Technical expertise and daring also define the menu at Quai n°4 in Ath.
In Luxembourg, Ryôdô pays a succulent homage to Japanese traditions. La Villa de Camille et Julien is the second new Star in the Grand-Duchy, where chef Julien Lucas and his team devise a classic French-inspired cuisine, centered around succulent local produce.

The MICHELIN Green Star first made an appearance in the MICHELIN Guide Belgium and Luxembourg last year, honoring 10 restaurants for their initiatives and their outstanding philosophy in favor of more sustainable gastronomy. An eleventh restaurant, ¡Toma! was added to this year’s selection. At this Liège address, Thomas Troupin has turned respect for nature, the terroir and its produce into the watchwords of his concept. With a locavore and zero waste approach, ¡Toma! offers guests a particularly uplifting dining experience.

Keen to promote the diversity of the stakeholders who contribute to offering memorable dining experiences, as well as to promote young talent, the MICHELIN Guide is engaged through its Special Awards.

The MICHELIN Young Chef Award, offered by San Pellegrino, goes to Ruben Christiaens at the newly starred Vintage restaurant in Kontich. This young professional, aged 26, has worked at some great restaurants including Eleven Madison Park in New York and Vollmers in Malmö, and impressed the MICHELIN Guide inspectors with his technical prowess and remarkable ability to create dishes which are an invitation to travel, boasting elaborate flavors.

Maxime Sanzot, at Racines in Floreffe, receives the MICHELIN Sommelier Award, offered by Ruffus. In this establishment, which is somewhere between a restaurant, a wine bar and a gourmet boutique, Maxime Sanzot reveals his talent, both by selecting rare and unusual nectars and by offering suggestions to diners with tact and pertinence.

The 2022 edition also rewards 147 Bib Gourmand restaurants, including 24 new additions. The restaurants awarded a Bib Gourmand offer excellent value for money. Among the new addresses, gourmets on the hunt for exoticism will delight in Greek flavors at Strofilia in Brussels, Italian fare at Fico in Ixelles, Bottega Vannini in Woluwe-Saint-Pierre and la cantinetta in Grivegnée.

At Maïnoï, in Braine-l’Alleud, the menu is a homage to Thai cuisine, while at La Fermette des Pins, in Buvrinnes, the onus is placed on more traditional flavors, served in a rustic setting.