Vietnam is a country of contradictions, a juxtaposition of old and new and an eclectic melting pot where history and the future meet and mingle. It's a place where pop-up shops, designer stores and hipster cafes jostle for space among picturesque pagodas, street vendors dole out noodles and squat little coffee shops serve fragrant cups of drip coffee.

RELATED: Vietnamese Beef Pho And Its Multicultural Origins
At Vietnam’s food frontier, we check out some young entrepreneurs and artisans who are changing the world’s perception of this Southeast Asian nation. Experience their wares and products right here in Singapore at SPRMRKT Vietnam, a three-month long event which runs until 20 March 2018 that will showcase present-day Vietnamese culture through a series of workshops, exhibitions, dining and retail selections. 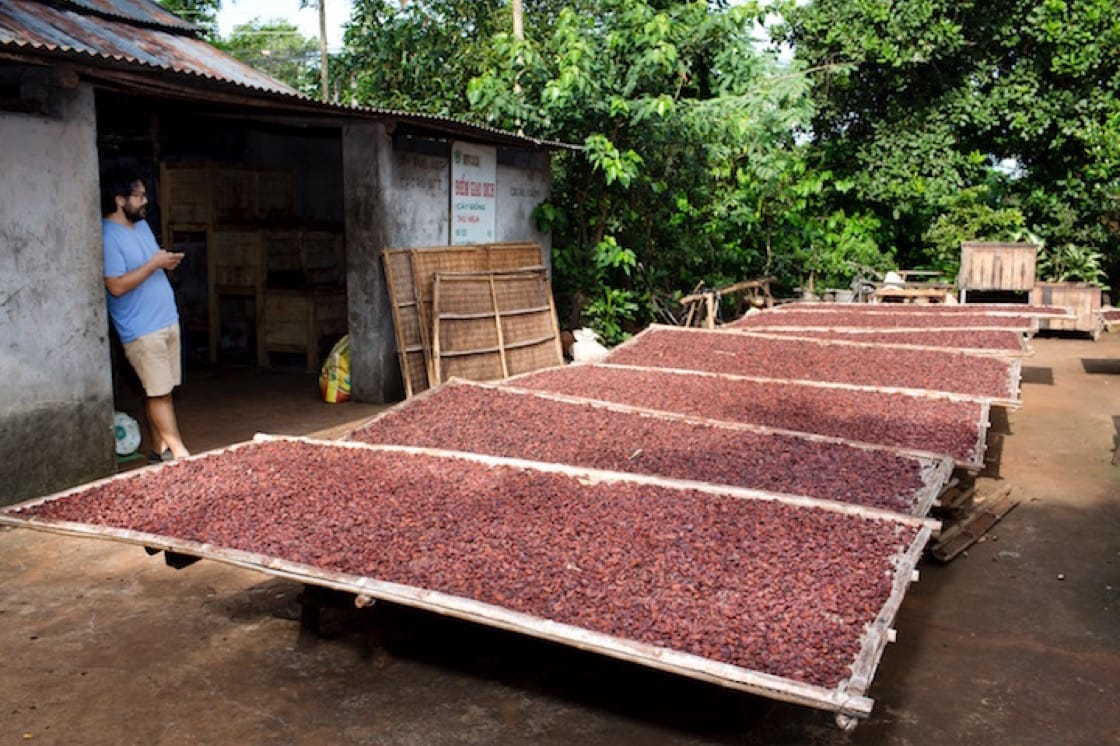 Vietnam is one of the world's major cocoa producers. (Pic: Marou.)

While cocoa is native to Central America, the Spanish conquest of the region introduced this exotic tropical product to Europe where it became a highly sought-after commodity. It wasn’t long before colonial powers sought to increase its production, and began planting the trees in other colonies—including Vietnam. For years, Vietnamese cocoa bean farms supplied Western production centres; in the country itself, little of it was actually consumed. 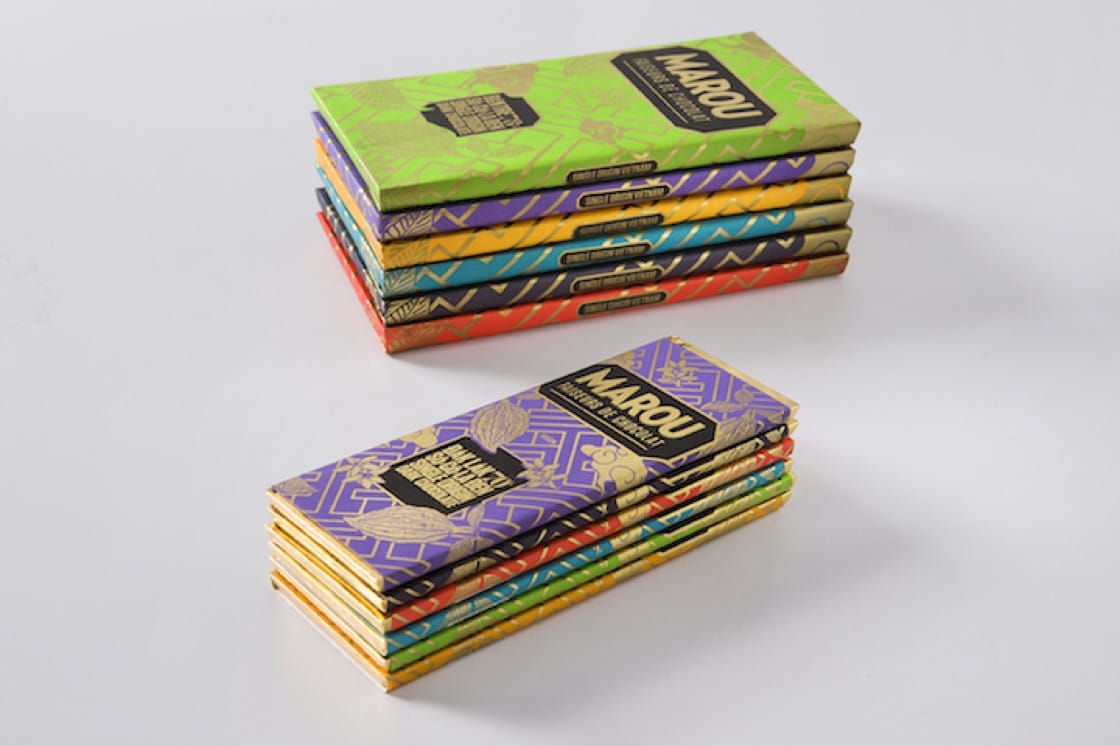 Marou's beautifully packaged single-origin bars (Credit: Marou.)
Changing all this are young Vietnamese artisanal chocolate companies like Marou and Stone Hill, who seek to produce premium Vietnamese chocolate made from cocoa beans grown regionally in the country. Marou is making waves worldwide for their single-origin chocolate bars, labelled according to the province the beans come from, like Tien Giang, Dong Nai and Ba Ria in southern Vietnam. 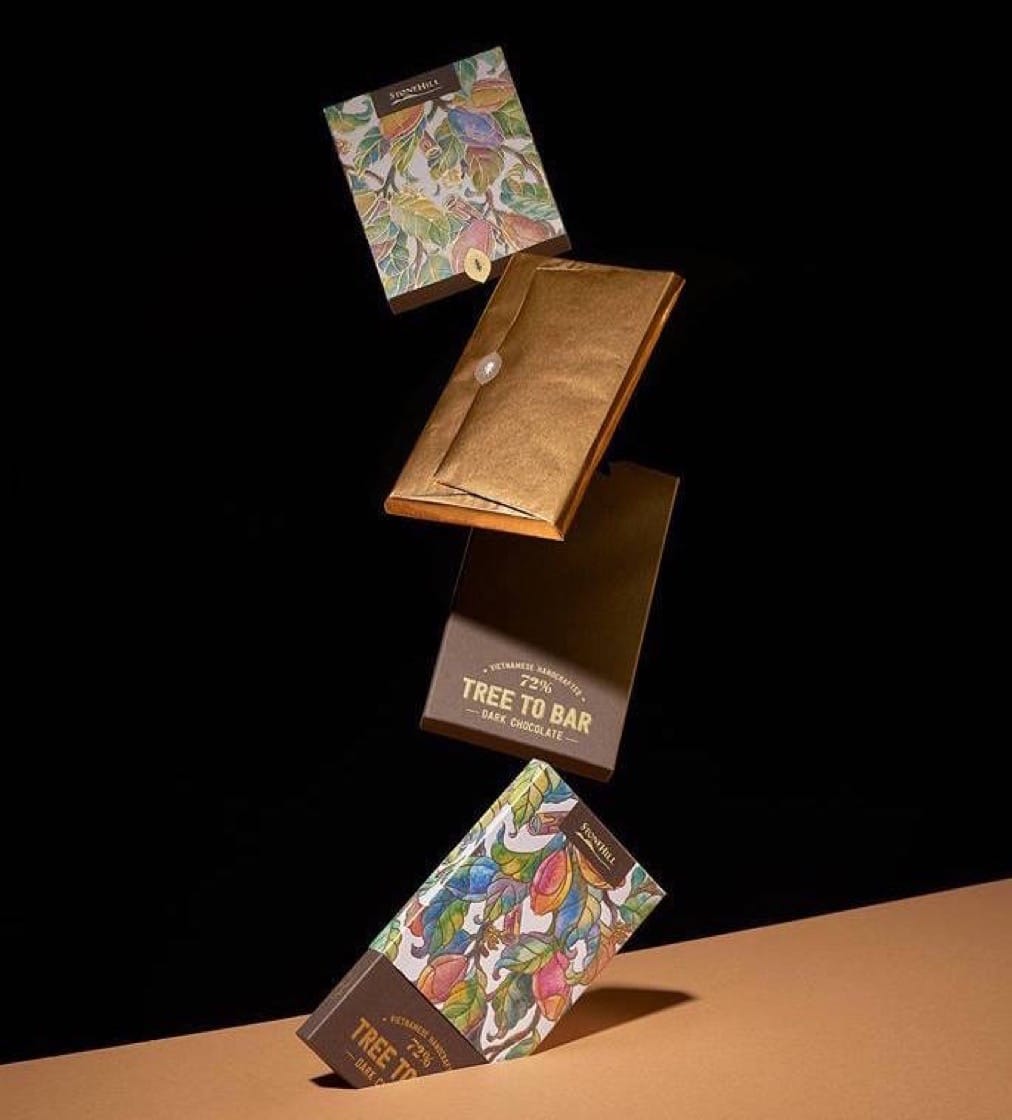 At a small family farm in Tan Phu, Dong Nai, young father and owner of Stone Hill, Loc Pham, produces Vietnam’s first tree-to-chocolate bar from cacao trees bred and grown in sustainable methods—eschewing the use of pesticides in favor of encouraging the growth of local ant colonies as a natural pest deterrent.

In the spirit of using every part of the cocoa plant, Stone Hill also makes a whole range of cocoa-based products from scrubs and soaps to a cocoa cider made from the juice of pressed dried beans, some of which are available at SPRMRKT during its Vietnamese showcase.
RELATED: The Rise Of Southeast Asian Chocolatiers

Just like chocolate, French colonists might have introduced coffee to Vietnam, but coffee culture in Vietnam is distinctly their own. Traditional Vietnamese coffee shops are a dime a dozen on the busy streets across the country, where you’ll find people leisurely enjoying their ca phe at all times of the day. Traditional Vietnamese drip coffee is made by adding ground coffee to a metal filter on top of a cup of condensed milk and letting hot water slowly drip through it. The resulting cup of coffee is drunk strong and sweet. 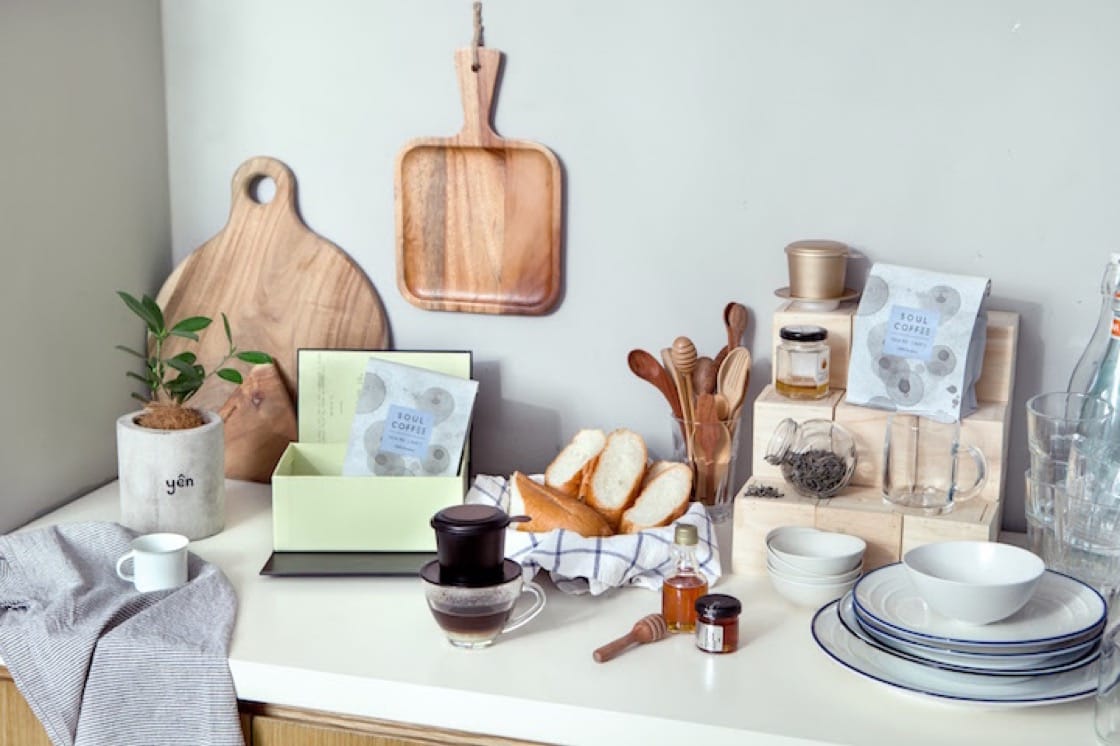 Soul Coffee is traditional Vietnamese drip coffee made cool. (Credit: Soul Coffee.)
Soul Coffee is part of a new generation of third-wave coffee makers in Vietnam. Co-founded by Australian-Vietnamese Quang Tran and an English business partner, Soul Coffee’s beans come from a plantation in the Central Highlands of Vietnam. Interestingly, unlike traditional ca phe that is made from the stronger Robusta beans, Soul Coffee’s Arabica beans lend the drip coffee a milder, more delicate fragrance. Tran’s Melbournian sensibilities translate into the most stylish, hipster packaging—a boxed gift set contains a bag of beans and a traditional metal drip filter in a decidedly cool matte finish. 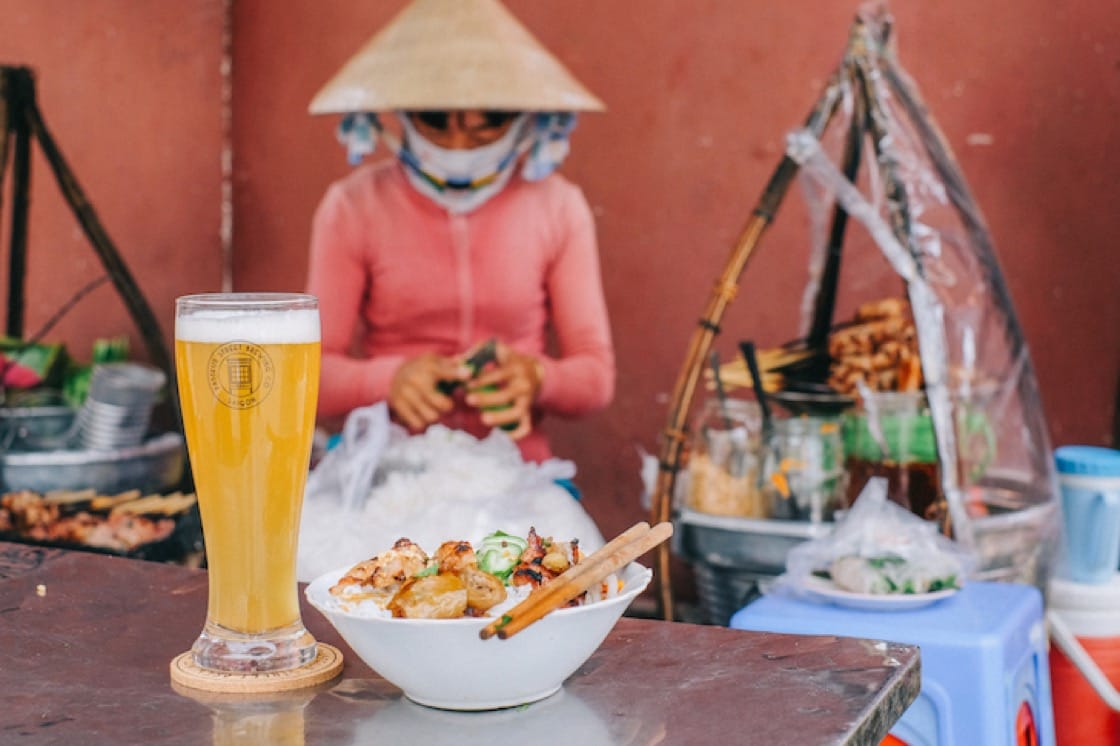 The beer culture in Vietnam starts with Bia Hoi—a local draft beer with 3 percent alcohol content that is brewed daily and delivered fresh to bia hoi stalls that litter the streets especially in Northern Vietnam. But in the recent years, tastes are changing as more craft beer breweries sprout up in Vietnam. 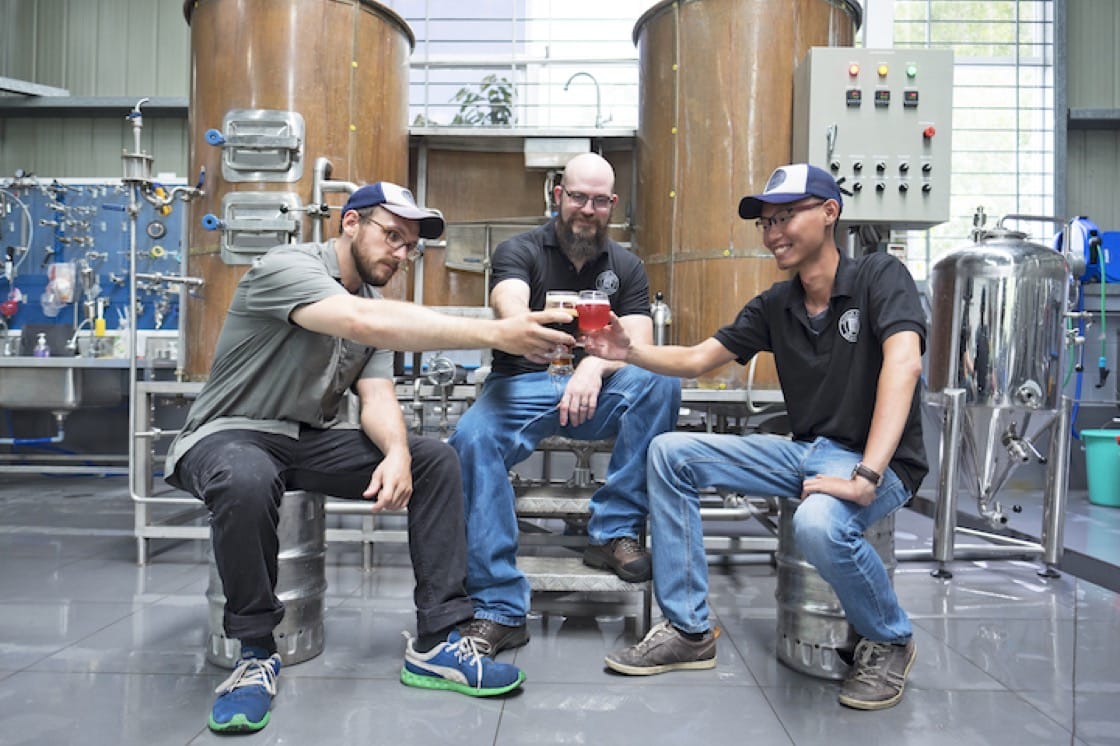 Pasteur Street's brew team.
In Ho Chi Minh City, Pasteur Street Brewing Company is one of the pioneers in the craft beer scene with a plethora of international beer awards under its belt and a growing reputation throughout the world for their quality brews. The brewery combines American craft brewing techniques with unique Vietnamese ingredients to produce distinct tipples like their passionfruit wheat ale, coffee porter made with coffee from the Da Lat region, and IPAs flavoured with ingredients like jasmine and pomelo.

Sample these and more at SPRMRKT Vietnam.

Video: A Symphony Of Flavours Upstairs

At Bangkok’s one-Michelin-starred Upstairs at Mikkeller, Dan Bark orchestrates a symphony of flavours with food, craft beer and coffee.