Getting Ready For L’eau de Cocktail

Fat-washing was seen at one point as the most advanced technique in cocktail making to add savoury notes to spirits. But a new trend has emerged: the most cutting-edge concoctions in the future will wear perfumes with seductive smells.

Cocktail is slowly going from sharing the spotlight with whisky and beer at the bar to being the one that stands out. The number of bars specialising in cocktails in Hong Kong has shot up in the past five to six years. Restaurants are quick to follow suit, hiring mixologists to provide cocktail pairings with their dishes. In the world of cocktails, alcohol doesn’t do the entire job. Connoisseurs look for special aromas that give the concoction an extra dose of oomph. And it seems that the aroma game among mixologists is going through a new revolution.

How is fragrance injected into cocktail? Mixologists from the past and nowadays do it very differently. Traditionally speaking, herbs like thyme, rosemary, mint and dill, and citrus peels are added to the drink directly. They act as aromatic agents to elevate the cocktail’s smell and flavour. 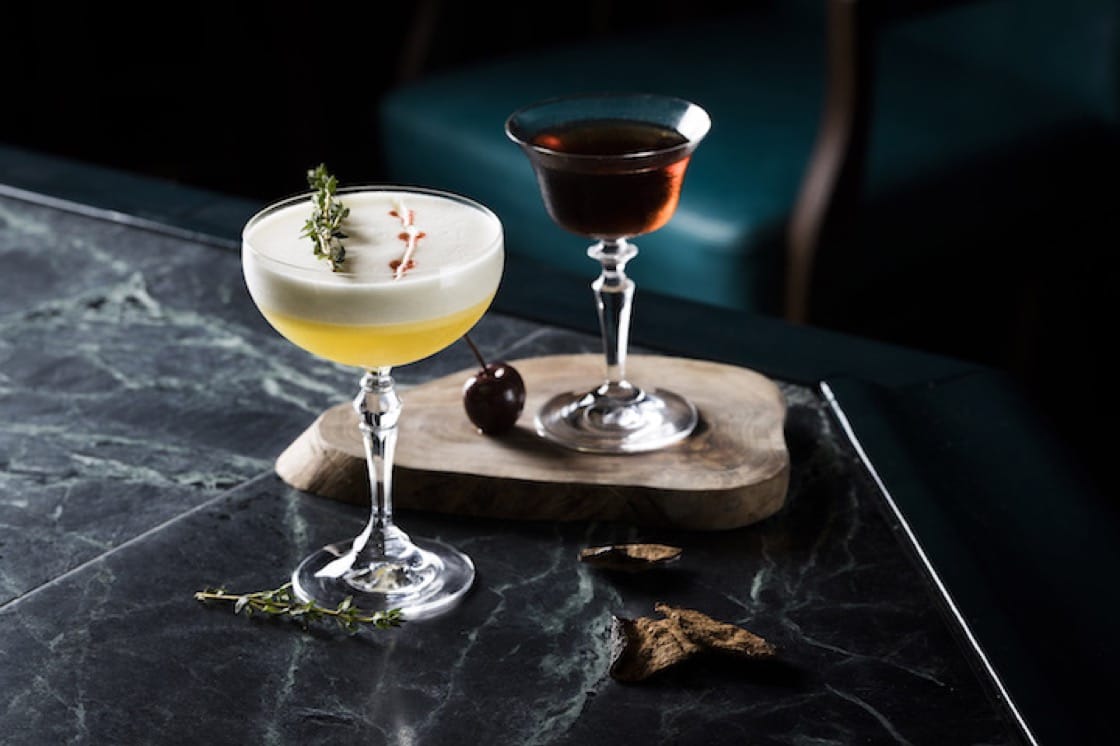 Traditional cocktails depend on herbs and citrus peels to boost the aroma of cocktails.

It was a decade ago that the New York bar PDT developed a new technique known as fat-washing. All of a sudden, there are notes of sausage and cheese in Bloody Mary, and a glass of gin carries the smoky smell of bacon. This method soaks pan-fried meat in spirits like whisky, allowing the former’s strong savour to penetrate the liquid. The spirit is then chilled in the fridge or freezer, so that the fat would separate from the spirit and be skimmed away easily. In this way, the drink is armed with an umami bomb without picking up too much grease.

“You can do a lot with this technique. Besides meat, sausage and foie gras are used. The down side of it is that the fat might not be completely taken off. Except for the cocktail fans who are more receptive to novelty, it hasn’t been that popular and embraced by too many people,” mixologist Stanley from J’s Bar Bistro, The Royal Garden, told us. 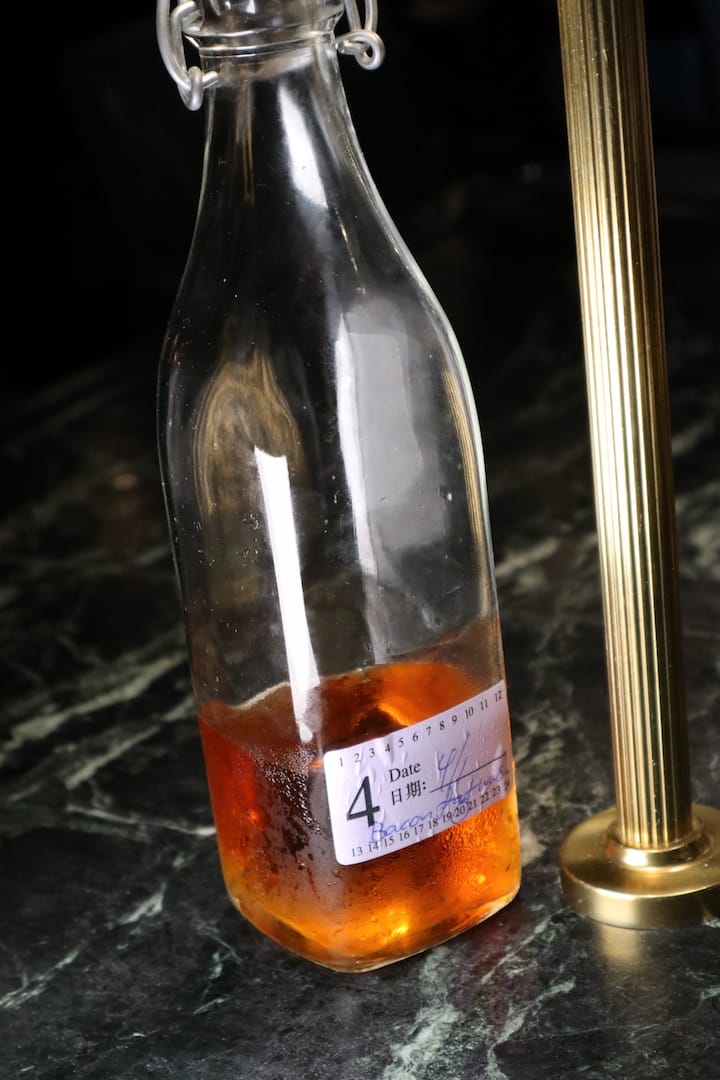 A new approach has different types of fragrances sprayed all over the cocktail like some boutique eau de cologne. Antonio Lai, arguably the best mixologist in Hong Kong, reacted to it with enthusiasm. The person-in-charge of molecular cocktail outlet Quinary, whisky-oriented Angel’s Share and Hong Kong’s first gin bar OriGin predicted this method would become the next trend in the field.
“It overcomes our reliance on seasonal fruits, herbs and spices. It’s like how perfumes are made, only with a lower intensity,” Lai said. 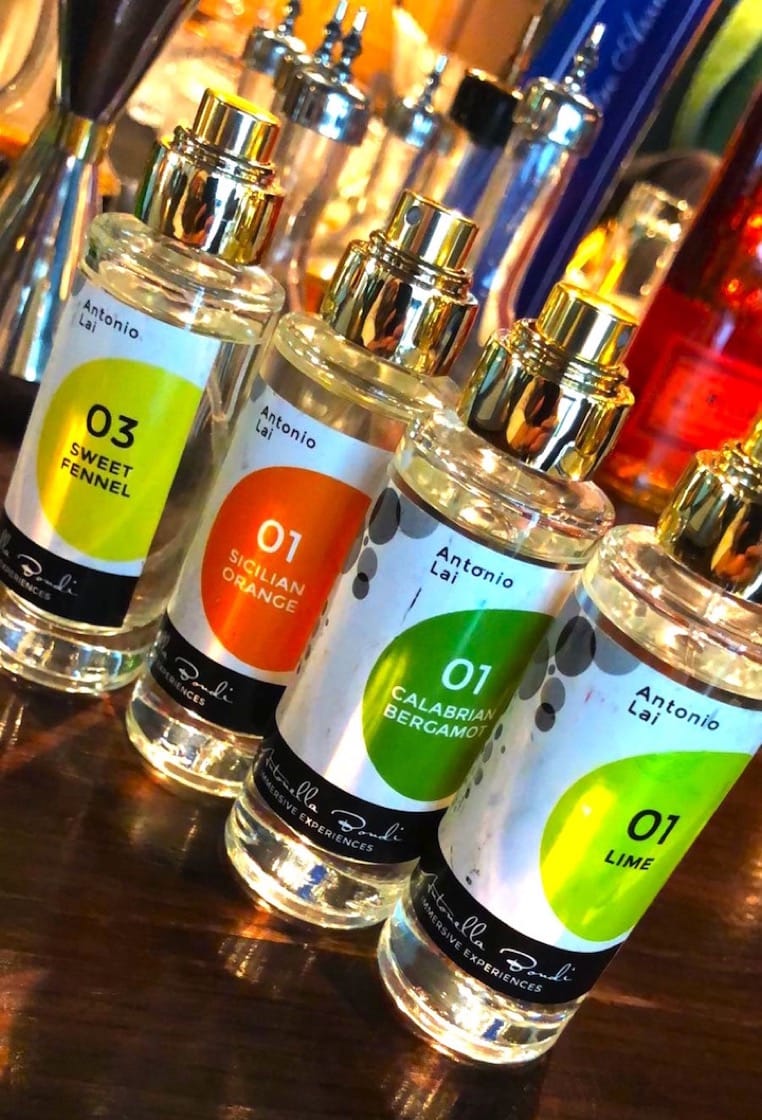 Well-known Italian perfumer Antonella Bondi is an authority in this regard. Italy plays an active role in encourage collaboration between chefs and mixologists in recent years. Food fragrance that could be applied on cocktail making is one of the groundbreaking developments that come out of it. Bondi released her book Essence in 2016 introducing food fragrance and their application. In the launch event, Italian chef Giancarlo Perbelini described this new invention as such, “Food fragrances are a necessity to add a magic touch to food creations. We cook with love, care and absolute passion. The same passion can be found in Bondi as she was making these products.”

Lai is one of Bondi’s clients, having ordered several food fragrances.

“Considering cocktails have aromas of their own, food fragrance might seem a bit pointless from the outset. However, it’s vital in creating drama around the drink. Imagine we are having an orange cocktail, but we spray the apple-flavoured fragrance around it. It smells like apple but tastes like orange. What a unique experience it is!” He exclaimed.

A wide range of new fragrances for cocktails – coffee, hazelnut, orange, fennel, bay leaf, to name a few – have popped up in Lai’s mind, waiting to be produced by Bondi. He does have a few bottles of fragrances on hands, and he’s about to introduce it first to gin and tonic. People tend not to smell gin and tonic and neglect its aromatic potential. Lai is determined to break this mold.

Of course, this invention is still in its infancy. There’re still six to nine months of experimentation before it is officially launched. But if Lai is confident food fragrance is going to make an impact, there’s a reason for cocktail lovers to watch out for it.