Wander the wide, cobblestone streets of Dumbo after work one night and you might run into pastry chef Ryan Butler on his way to teach a baking class. Butler is the pastry chef of his Williamsburg—and now Dumbo—namesake cafés, Butler Bake Shop and Espresso Bar, which he co-owns with hospitality wiz Rod Coligado and design-mind Hugo Murray.

Follow Butler down Water Street where you’ll find his new industrial-chic and otherwise-daytime location—open as of late August—well-lit and teeming with aproned couples mixing batters and doughs. Murray and a crew of young Brooklyn personalities are on hand to keep spirits high and the rosé flowing. 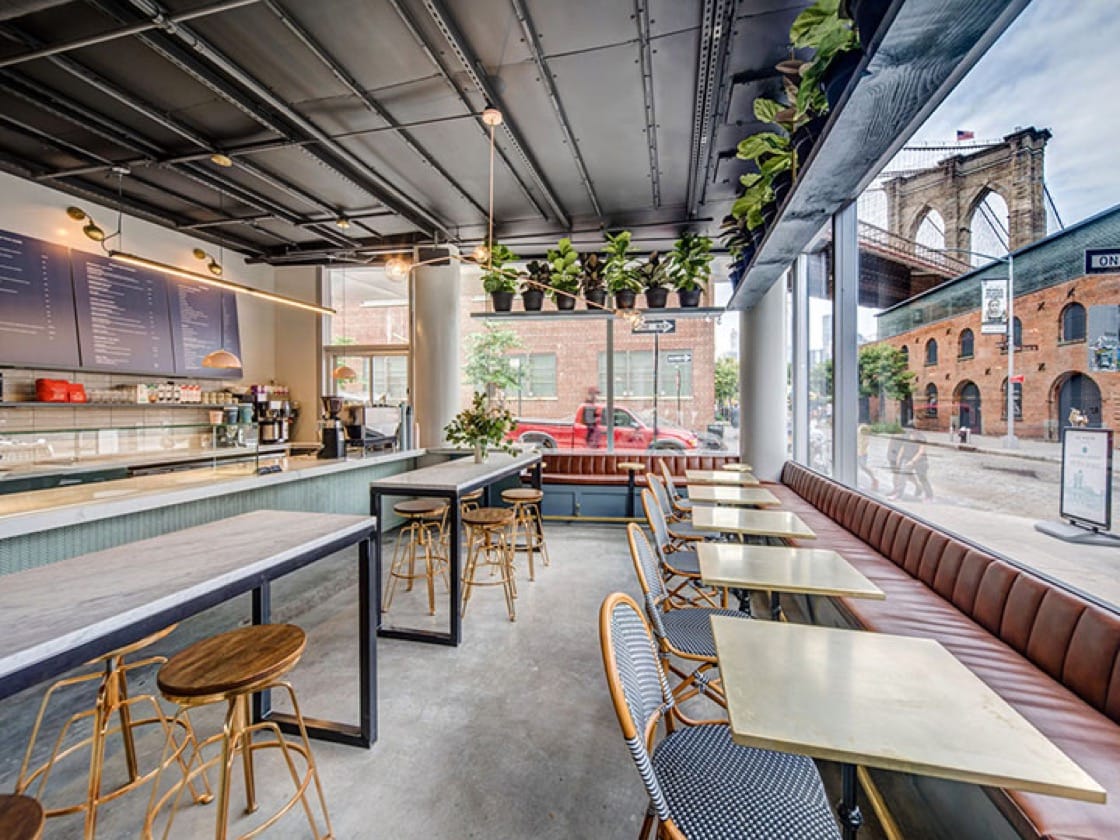 The new Butler location is on 40 Water Street.

Separated by an immaculate bar, Butler offers clear, sincere instructions on recipes he’s honed since his days at Park Avenue Café (under acclaimed chef Richard Leach), The Gramercy Park Hotel, Tocqueville, The Django and the now-shuttered Piora, which once held a Michelin star. “It’s different running the baking program at a café like ours rather than leading pastry for a sit-down restaurant,” says Butler. “For one thing, I don’t need to come in quite so early in the morning because I have people helping.”

It’s clear from a visit that Butler is a well-oiled machine. Guests of Butler’s baking classes arrive to pre-portioned ingredients, invitations for coffee or bubbly, sturdy leather aprons and lessons from one of the city’s best pastry chefs. They head out hours later with a big box of baked goods they can proudly say they made themselves.

The seasoned trio has scheduled a number of baking classes for the fall. September 20 and October 11, for instance, Butler will instruct students how to bake an herb and chile scone (the bakery’s most popular item so far, according to Coligado); on September 27, a sticky date muffin, which the inaugural group made on September 13; and on October 4, an apple miso crostada.

School’s out and fun’s in with these cooking and baking classes that could turn your children into mini master chefs.

Add these cooking classes to your Tokyo itinerary for a travel experience to truly savour.

The seasoned trio has scheduled a number of baking classes for the fall. September 20 and October 11, for instance, Butler will instruct students how to bake an herb and chile scone (the bakery\u2019s most popular item so far, according to Coligado); on September 27, a sticky date muffin, which the inaugural group made on September 13; and on October 4, an apple miso crostada.