The dish has been on the menu since 1992—and it's not going anywhere.

Chefs and co-owners Bruce and Eric Bromberg’s stalwart Blue Ribbon Brasserie is famous for it’s late-night eats, but if there’s one standout dish, it’s the bone marrow, which has been a highlight since the restaurant’s inception. (Ask the Bromberg brothers if they’ll ever take it off the menu, and they’ll be frank: “No way, no how!”)

The Brombergs were first introduced to bone marrow while working at Le Recamier restaurant in Paris under chef Robert Chassat—it was served as family meal. “There was a bandsaw in the basement, and when Robert had some extra bones that wouldn’t fit in the pot, he would spend a few minutes before service cutting the bones into 2- to 3-inch pipes, tossing them into a pot with cold stock and bringing them to a slow simmer until the marrow softened and was warmed to the center,” recalls Bruce. The only accompaniments were grey sea salt from Guérande and crusty bread. “It was heaven!”

And so, when the Brombergs opened their brasserie in 1992, they brought the dish stateside, purchasing bones from New York City butchers for a mere $0.19 per pound. “When we first started to buy the bones, our butcher didn’t know how or what to charge us—he never had the request before,” says Eric. The duo described the dish as “similar, but even better than foie gras.”

The bone marrow at Blue Ribbon is served with an oxtail marmalade also from their days in Paris at Bistro du Louvre. It turned out to be a match made in heaven. “The first time we ever tasted it, we almost fell over backwards,” says Bruce. “The addition of vinegar and sugar transformed a meaty stew into a revelation.”

It became an instant cult classic. These days, you’d be hard-pressed to find a restaurant—fine-dining or gastropub—that doesn’t have marrow offered on the menu, whether it’s bones roasted as canoe bones or marrow butter melted into a sauce. “There have been publications that state Fergus Henderson created this dish at his eponymous restaurant in London,” adds Bruce. “But since he only opened St. Johns in 1994—two years after Blue Ribbon had been serving this dish to the culinary curious and beyond—we are confident that history is on our side.”

As for cooking marrow bones at home, the Brombergs stress to keep it simple: “The most important step is the degorging process—it can be done by your butcher, but it is almost better to do it at home under your watchful eye. And don’t let the bones boil!” 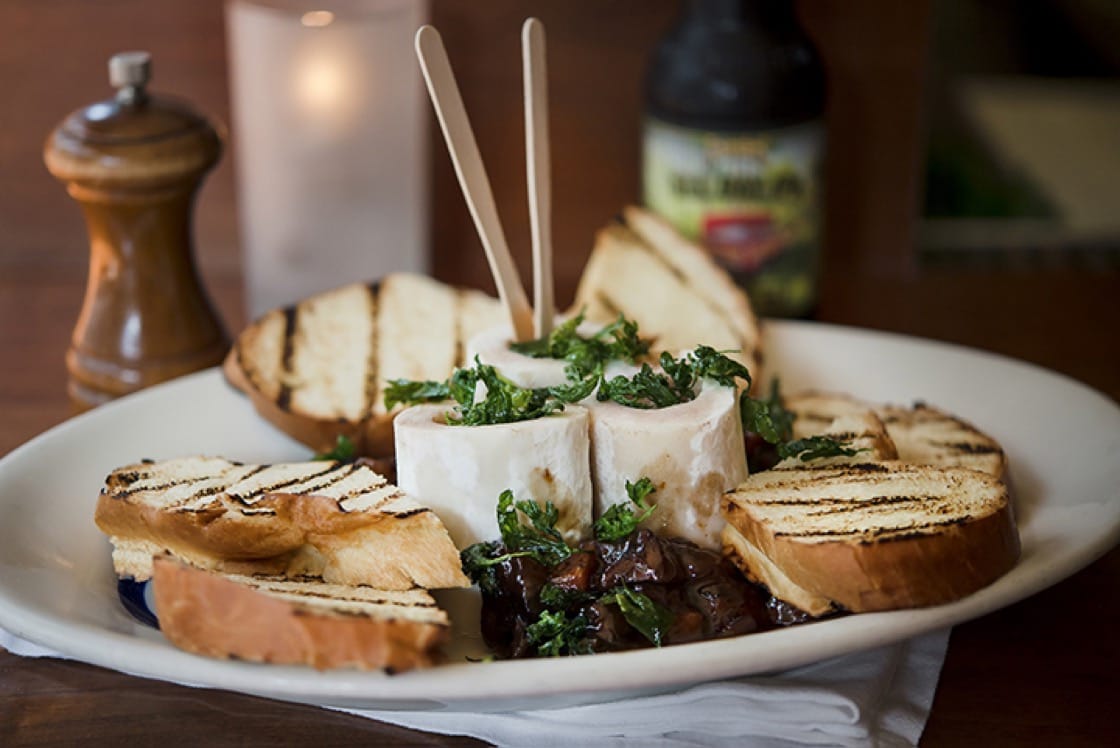 For the Marrow Bones:
3 pounds center-cut beef marrow bones, cut into 2-inch pieces, tendons trimmed (ask your butcher to do this)
¼ cup kosher salt, plus more if needed

2. Make the marmalade: Combine the oxtail, 3 cups Port, the red wine, veal stock, garlic, thyme, and peppercorns in a large pot. Bring the mixture to a boil, reduce the heat and simmer for three hours. Transfer the oxtail to a bowl; once the meat is cool enough to handle, remove the meat from the bones and chill in the refrigerator; cut into small cubes. Discard the bones and refrigerate the meat until ready to use. (This can be made up to two days ahead.)

3. Strain the oxtail liquid into a large skillet, discarding the solids. Bring the liquid to a boil over high heat; reduce heat to medium and simmer until mixture is reduced to 3 cups, 1½ to 2 hours.

4. Combine 3 tablespoons butter with the flour until it forms a paste. Whisk the paste, one tablespoon at a time, into the reduced liquid over medium heat. Cook until the mixture thickens slightly, about 3 minutes.

5. In a separate large skillet, melt the remaining 5 tablespoons butter. Add the carrots, shallots, and a pinch of salt over medium heat until slightly softened, about 15 minutes. Stir in the sugars, remaining 3 cups Port, vinegar, salt, and 1½ teaspoons pepper. Cook over medium-high heat until the liquid has completely evaporated, about 45 minutes. Stir in the oxtail meat, reduced oxtail cooking liquid, and remaining 1 teaspoon pepper; taste and adjust the seasonings if necessary. Set aside until ready to use, or, if not using the same day, transfer the marmalade to an airtight container and refrigerate until ready to use. (Before serving, reheat in a saucepan over medium heat until warmed through.)

6. Cook the marrow bones: Place the bones in a large saucepan and cover with water. Bring to a simmer over medium heat (do not let the water come to a boil or marrow will melt out of the bones). To test for doneness, place a thin metal knife in the center of the marrow and hold it under your lip to see if it’s hot. When hot, remove the bones from the water.

7. To Serve: Arrange the bones and challah toast on a platter. Spoon some of the oxtail marmalade in between the bones (reserve remaining marmalade for another use). Sprinkle the platter with the chopped parsley and coarse sea salt.

*Chef’s note: If you don’t have time, you can skip soaking the bones; it doesn’t affect the flavor. It does change the presentation of the dish, because the marrow retains some blood and will end up pink rather than a bleached white color; taste-wise, however, it’s the same.