A serendipitous opportunity to live above a butchery in his mid 20s immersed Paul Hallett, executive chef of contemporary grill restaurant, SKAI at Swissôtel The Stamford, into the hunky world of meat.

Then 25 and a cook at the one-Michelin-starred La Trompette in London, the Wales native lived in the vicinity of the restaurant. His best lodging option turned out to be an attic above Macken Brothers Butchers. The shop’s prime West End location meant that most of his meagre pay went to paying the rent and he couldn’t afford to do much on his days off. Naturally, he heeded the pounding and chopping sounds that came from downstairs and volunteered to be a butcher’s assistant for one-and-a-half years.

His stint at the butchery turned out to be a meaty learning opportunity. Now 41, his eyes light up as he recalls his halcyon days. He says: “I woke up at 3am, drank some coffee and headed downstairs to clean and chop meat, make sausages and burger patties and deliveries, and learnt how to break down parts of the cow, from the hind legs to half quarters. Everything was done in great speed with choppers and boning knives.” 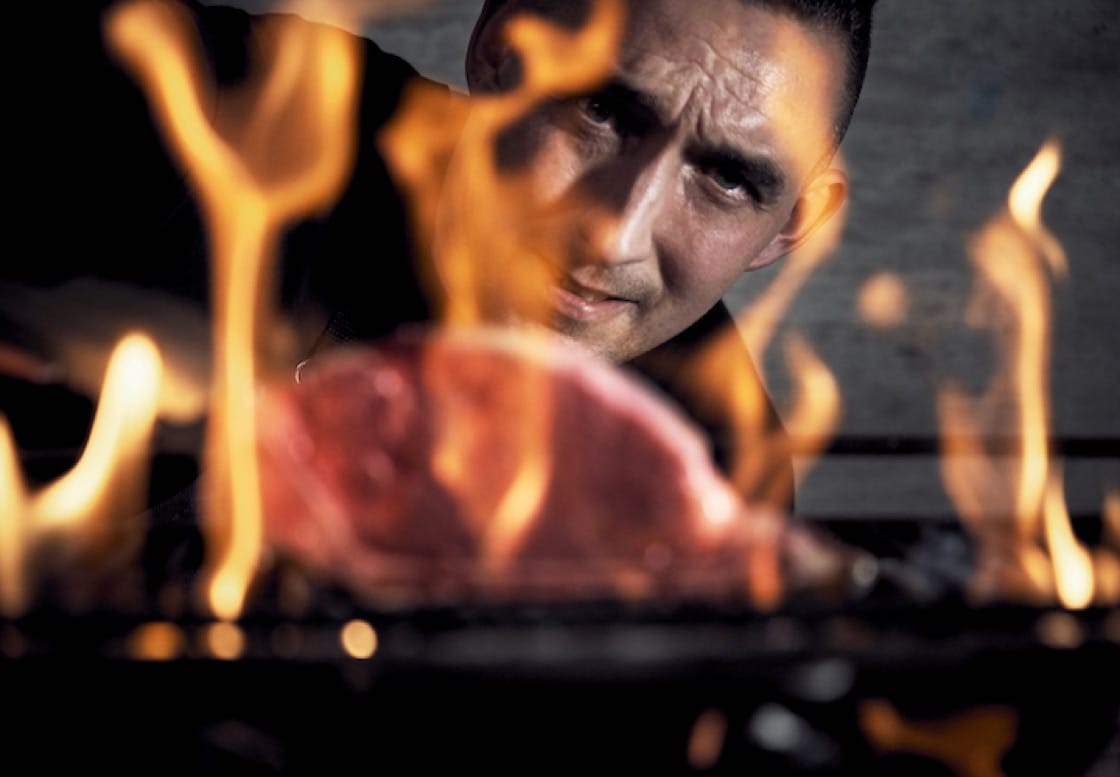 The ribeye is one of chef Paul Hallett's favourite meat cuts. (Credit: SKAI)

These butchery skills have carved the direction of his cooking career, from cooking at London’s famed Dorchester Grill to his latest role, helming SKAI, which offers a meat-centric menu with sharing plates infused with Japanese touches.

The main star of the 137-seat restaurant on the 70th level of Swissôtel The Stamford is the line-up of 10 varieties of beef. Originating from Japan, Australia, Ireland and the United States, the meat varieties boast a spectrum of marbling, flavours and textures. They range from the entry-level Ranger Valley Australian striploin (marbling score: 3), Blackmore full-blood Wagyu (marbling score: 9) to Saga Wagyu (A4 marbling). 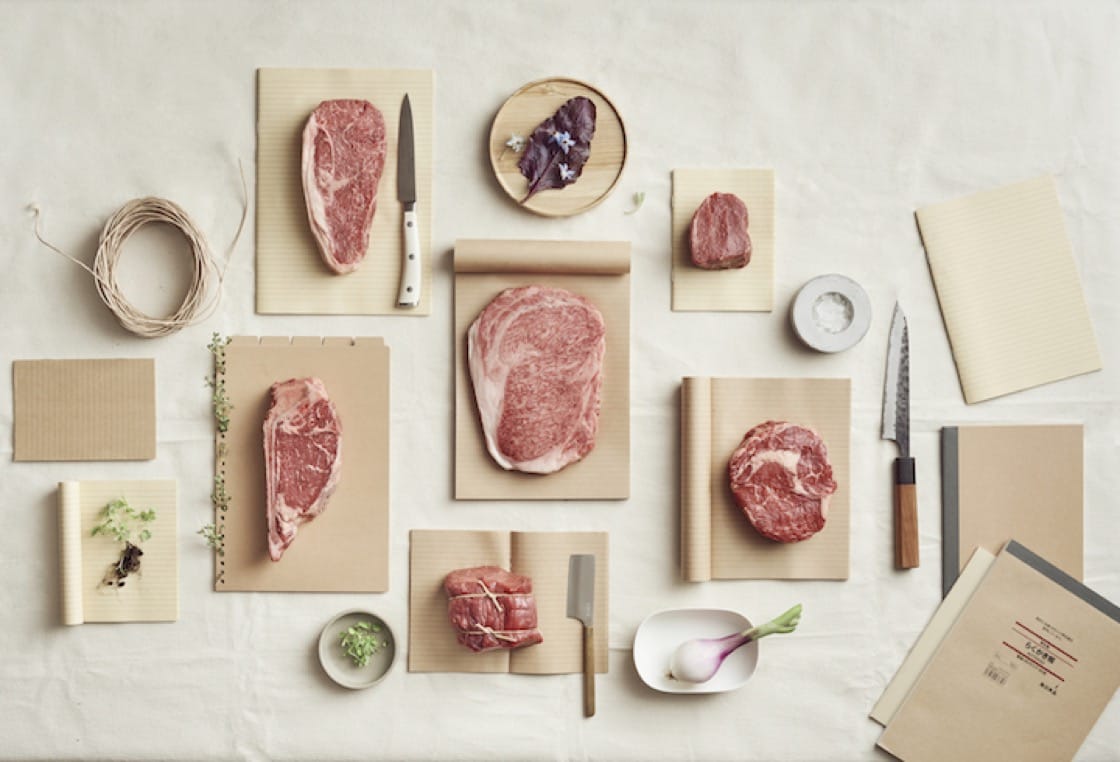 SKAI serves 10 types of beef from around the world, from Australia, Ireland to Japan. (Credit: SKAI)
A List That Meats His Carnivorous Expectations

To decide which beef made the cut, Hallett conducted a blind taste test of 75 meat cuts from 40 farms over a few months. The cuts, which were cooked medium rare and sliced to the same thickness, were accessed based on their region of origin.

What is Hallett’s favourite cut? He has a soft spot for the rib-eye. “I think rib-eye has got character, especially the cap, which has slightly more fat. When cooked, it also has an amazing flavour and texture,” he enthuses, with his hands tracing out the outlines of the layer of fat around an imaginary slab of rib-eye.

“The Wylarah beef also hits all the right buttons: it has the right amount of marbling and sits right on the edge of having enough fat and meaty flavour. It makes me smile,” he adds with a grin.

A key reason for opting for more marbled cuts is that their heftier fat content caramelises better and withstands the strong charcoal flavour in a Josper oven. At SKAI, Hallett uses Japanese binchotan that imparts an unique aroma, blocks of wood to keep the oven temperature even and mango tree charcoal that kisses the meat with a nice smokiness. After the meat is cooked in oven at about 400°C, it is slightly seasoned with Himalayan salt. 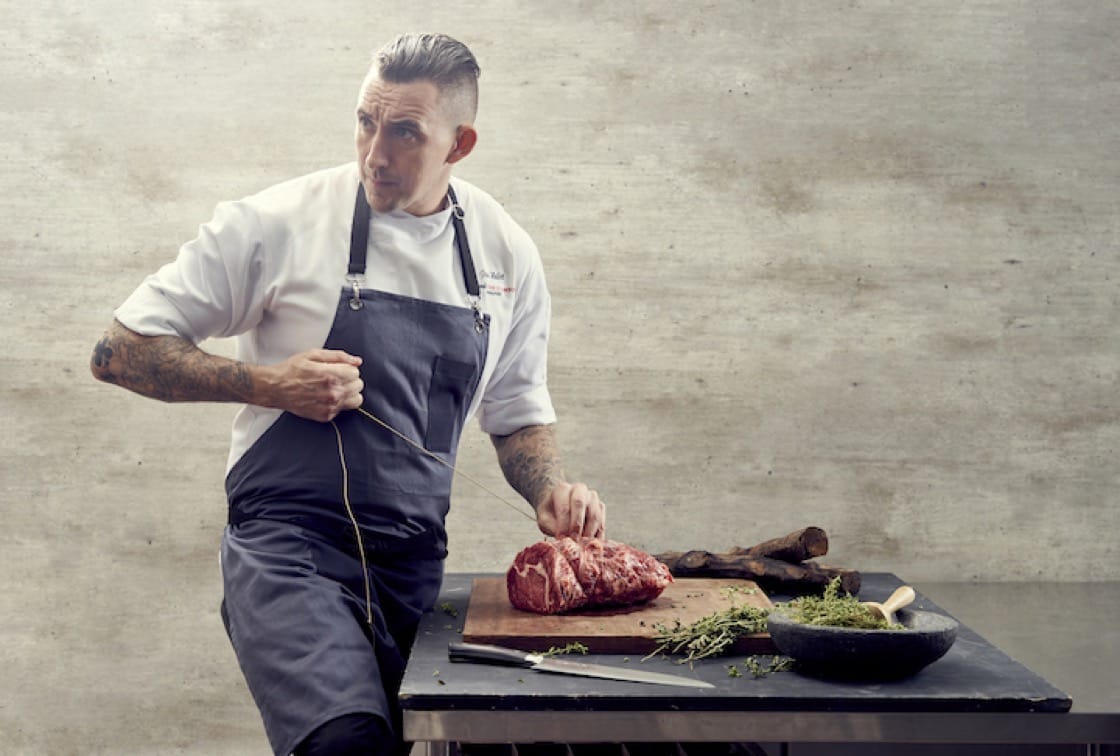 Chef Paul Hallett got his start in the world of meat as a butcher's assistant as he used to live above a butchery. (Credit: SKAI)
Cooking Close To The Heart

Growing up in rural Wales, food was a crucial part of his childhood. He says: “The kitchen was a focal point of our home and my mum made sure that we were all fed well with dishes such as frozen yogurt, pea casseroles, mashed potatoes and soups.” The youngest of three sons, Hallett is the black sheep in the family. His father and brothers are in the engineering and construction industries, while his interest gravitated to cooking, which led him to attend catering college at 17.

Living in the countryside gave him access to fresh produce, such as drinking bottles of freshly squeezed milk from a nearby farm and checking out markets that were chock-full of local goods such as chutneys, pickles and meat.

Sharing a strong connection with food is one of the biggest pillars of his cuisine. He says: “Some chefs think too much with their heads and not with their stomachs. The ingredients that I cook with are things that I feel passionate about and they are linked to my childhood, career and things that I have discovered along the way. I like having an honest relationship with food.” 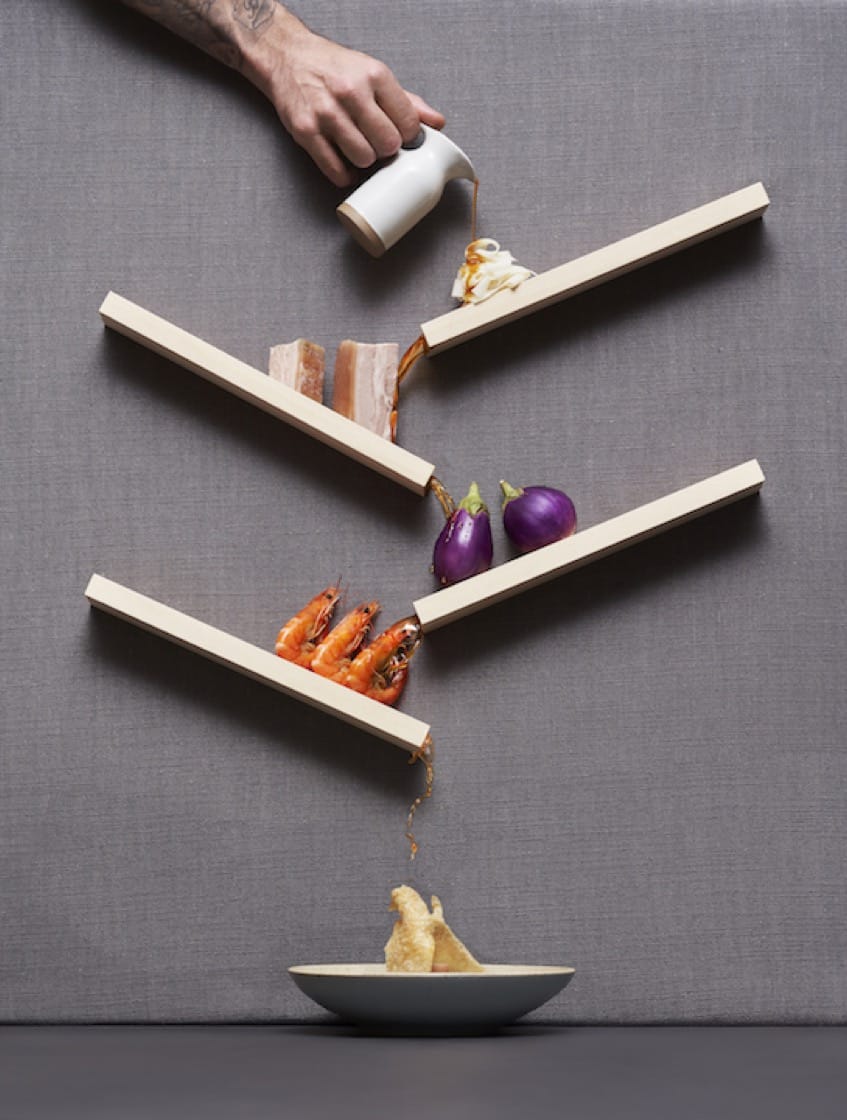 This is why Hallett has deftly incorporated elements of Asian ingredients and cooking techniques into most of his dishes at SKAI. A fan of Japanese food, he has woven in Nippon elements such as tempura, miso and dashi into some of small plates and mains.

Asian-inspired dishes include the Dingley Dell Pork Belly (left), which has tempura prawn and charred miso eggplant accompanying a slab of sous vide pork belly, a dashi-style chicken consomme, and uni and saffron risotto. He says: “I love the lightness of flavours and it is also partly because I have become more health-conscious and exercise more over the past years.”
In some ways, these Japanese touches are part of a shift in his dramatic change in palate since he moved here five and a half years ago to helm the now-defunct Equinox, a French fine-dining restaurant that was SKAI's predecessor.

Hailing from a classic French cooking background, Hallett says that he used to favour heavy dairy-based sauces and reductions in his dishes, but three years ago, his palate and cooking style began to lighten considerably. 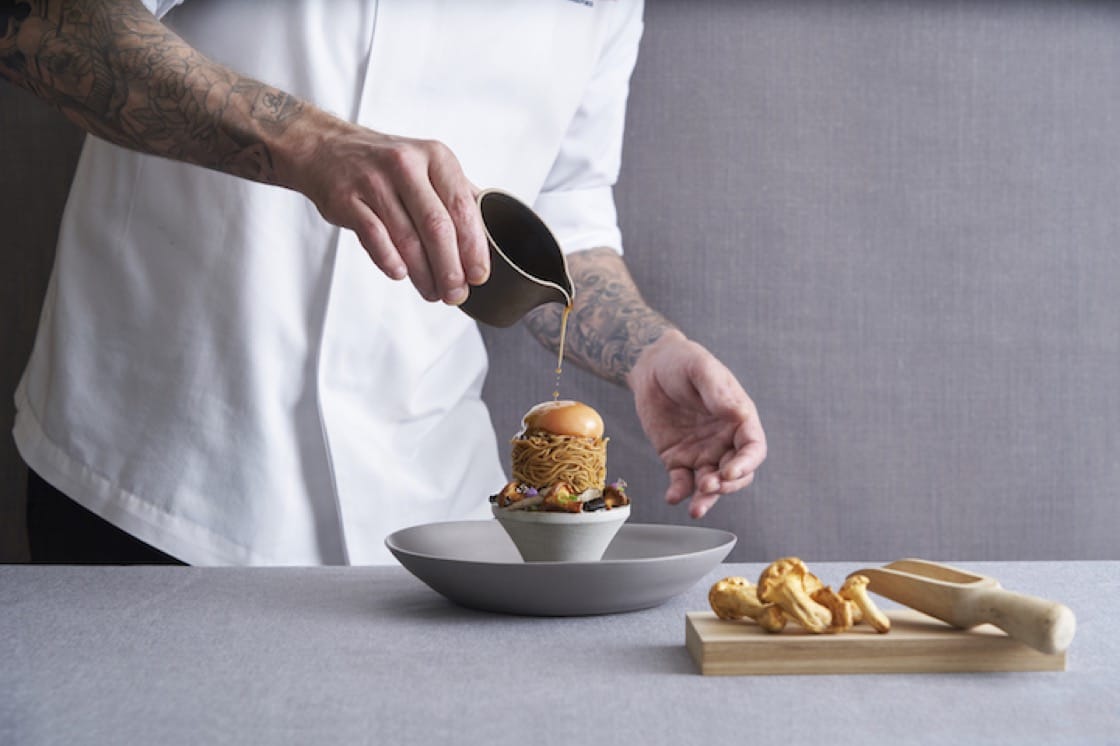 One of the dishes with Asian influences is the crispy rye noodles, which is inspired by sang mee. (Credit: SKAI)
Naturally, cooking in Singapore has opened his culinary horizons to using lighter dressings and experimenting with ingredients such as soya sauce, vinegar, chilli and ginger to enhance his dishes with bolder flavours and heat. “Writing the menu for SKAI was the easiest one that I have ever done,” he says with a laugh. “I finished the first draft within three hours.”

He has also introduced a rye noodle dish fashioned after sang mee or crispy noodles. It is served with mushroom and dashi broth and topped with sauteed wild mushrooms, maitake puree and onsen egg.

Hallett, who is a fan of local dishes such as rojak, black pepper crab and char kway teow, says: “I spent five years building up on the right elements of the restaurant such as having great service and kitchen staff. And now, I want to see how we can push further.”
SKAILevel 70, Swissôtel The Stamford