At Seven Reasons in Washington D.C., business as usual has taken on new meaning. The MICHELIN Plate restaurant opened in April last year with a menu of inventive pan-Latin dishes designed by Enrique Limardo, a Venezuelan chef who has experience cooking in some of Spain’s best and most innovative kitchens. Prior to opening Seven Reasons, Limardo was making a name for himself at the restaurant Alma Cocina Latina in Baltimore. At the time, Ezequiel Vázquez-Ger was just a loyal customer and a fan of Limardo’s cooking. Eventually, Vázquez-Ger convinced Limardo to join him for a venture in D.C. and thus, Seven Reasons was born.

This spring, when D.C.’s stay-at-home orders were announced in response to the spread of Covid-19 and the restaurant industry shuddered to a halt, Vázquez-Ger and Limardo pulled the breaks on whatever momentum they had built since opening just over one year earlier. Seven Reasons did not offer takeout pre-pandemic, so Vázquez-Ger and Limardo immediately began contemplating their next move. “I thought the pandemic was going to be a two-week thing,” says Vázquez-Ger. “But, Enrique said we have to do it.”

It was then, perhaps, that Vázquez-Ger realized the significance of the moment. “We see crises as opportunities, and we believe that this crisis in particular was an opportunity to change a broken system,” he wrote in an email. Vázquez-Ger has a background in economics and political consulting. It gives him a unique perspective: When describing the restaurant's shift to takeout and other new sources of revenue, he talked about the Lean Startup method of rapid viability testing. He also believes wholeheartedly in fiscal transparency. At one point in a recent conversation, he mentioned wanting to share the restaurant’s P&L sheets with customers so they can see exactly how slim the margins are.

It’s a strategy that only works when you have little to hide, and Vázquez-Ger and Limardo certainly are wearing their hearts on their sleeves. In their “Covid Diaries," guests can keep up with everything the restaurant is up to. On March 17th, the restaurant announced its first-ever takeout menu. They adjusted the dishes practically overnight—originally designed for a la minute service and highly stylized plating—switching to creations that could bear a short commute in a takeaway box. Vázquez-Ger and Limardo decided to handle deliveries internally, not via third-party providers. This kept the restaurant open, and also brought back a handful of employees who thought they were out of work.

Rafael Dolande is an Assistant Manager at Seven Reasons. He joined the restaurant shortly after it opened last year as a server and has worked his way into a management position. When the restaurant temporarily shut down in March, Vázquez-Ger and Limardo quickly asked Dolande to be in charge of delivery logistics. It would be a new area of expertise, but he was willing to learn. “[They] asked if I was comfortable to come to work,” Dolande said. Those who returned, like Dolande, were dedicated to the success of the restaurant and keeping as many people employed as possible. “I felt proud,” he added.

Over the past six and a half months, and three months into D.C.’s phase II of reopening (which allows for indoor dining service at 50% capacity), Seven Reasons has added a plethora of experiences for customers to choose from. There is a socially distanced chef’s tasting counter, an original cocktail-first tasting experience, patio dining and several at-home options from the regular takeout menu to a catered ceviche “on wheels” station for small gatherings. It seems like a dizzying amount to keep track of, but Vázquez-Ger insists it’s not.

“We knew that we were opening in a different world: Less diners, more rules, more accountability. We decided that our best way to navigate that was by doubling down in service, food and creativity.”

The changes are working. While the restaurant’s pre-pandemic levels of cash flow have not quite fully recovered, they are seeing above average ticket totals and enthusiastic support of the various experiences in the form of repeat business. Utilizing platforms like Tock helps minimize no-shows (the rate is currently 0%) and provides an invaluable tool for cost management. And in an unexpected twist, slowing down forced the team to focus on quality over volume. When the coronavirus is no longer a concern, expect the restaurant to maintain more spacing in the dining room, the extension of the cocktail experience and some form of at-home dining. 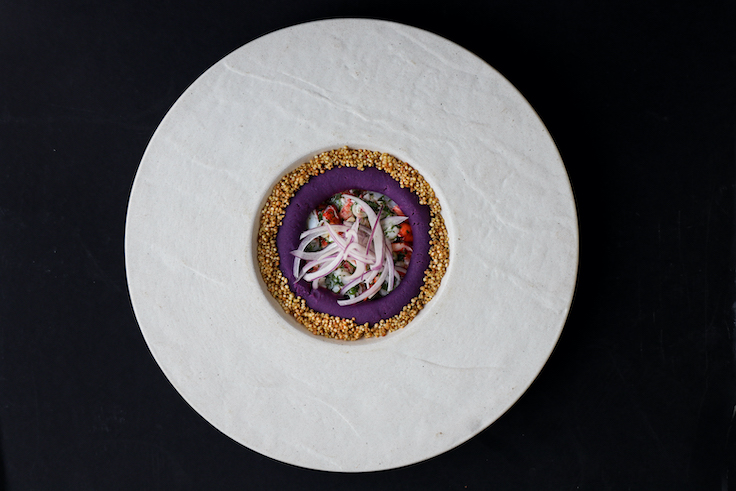 The red snapper ceviche at Seven Reasons has a striking presentation when served at the restaurant, but the dish is also available on the takeout menu. Photo Courtesy of Seven Reasons.

But perhaps more important than the restaurant’s fast and successful acclimation to a diversified revenue stream is how Vázquez-Ger and Limardo have changed their employee benefit structure.

In mid-June, Seven Reasons published The Path Forward on their website. It’s a short essay detailing the thought process behind a series of changes to staff compensation and the implications for the customer. The note starts: “The last few months has made us think a lot…As you all know, the restaurant industry was particularly affected by the crisis, and restaurant workers even more. Given the particular circumstances we are living in, we believe it's time to prioritize our employees’ financial stability....”

With the return of patio dining, discretionary tips would be replaced by a mandatory 22% service fee. As other high-profile restaurants have recently moved away from the no-tipping policy, Vázquez-Ger and Limardo are embracing it as a means to give their employees more certainty in their take-home earnings. The fee will cover the new hourly wage of $17, which is two dollars more than D.C.’s minimum wage and also just a starting point (depending on tenure and experience, staff can earn well over $17 an hour). Removing tip pooling empowers the restaurant to reward its staff, not the guest, and—Vázquez-Ger emphasizes—is how most businesses outside of hospitality manage compensation.

When Donalde was alerted of the changes to how Seven Reason would be paying its employees, he said he felt positive about the change. “You feel safe. You know that you’re going to make a certain amount each week.” Guests can still leave a tip on top of their bill, and some do. This is shared across the staff and helps feed a pool of money that is used to pay out periodic bonuses, another new form of compensation introduced over the summer.

Seven Reasons also launched employee-empowered pop-ups, announced online on March 20th as the “Employees to Entrepreneurs” series. SOLEADO is a burger concept by line cook Wille Harner, who designed the menu and uses the restaurant’s purchasing connections and kitchen to make it happen. After expenses, Harner stands to earn a profit. Similarly, CAKES! was an earlier pop-up run by pastry chef Gene Flores, which the restaurant promoted via their social media channels.

Vázquez-Ger firmly believes in the people-first approach. He knows first-hand that not everyone joins the restaurant industry because they love it; he certainly didn’t at first. As Vázquez-Ger grew to love the business, he also sees the Seven Reasons team growing into their roles and asking for more responsibility. It’s why he and Limardo are planning a series of talks, as part of the new Career Development Program, where visiting guest experts can share their knowledge with the staff. Vázquez-Ger also equips all front of house with business cards. “Formal education is important, but knowing how to build long term relationships is as important, and it’s something that anyone can learn how to do,” he said.

Eventually, the company wants to tackle another big topic in the industry—healthcare. Providing health insurance will further pad employee’s safety net and hopefully give them the peace of mind needed to excel at their jobs. It’s a rare and expensive benefit not commonly found in restaurants, yet it is the bare minimum for any corporation. Vázquez-Ger puts it quite simply when he says, “it’s the right thing to do. Period.”