With a pastry career spanning almost three decades crafting desserts for MICHELIN-starred restaurants including Le Bernardin in New York City and Michael Mina in San Francisco, Lincoln Carson has finally made the transition to chef and restaurant owner with the opening of his first restaurant, Bon Temps, in Los Angeles's Arts District. Opened on June 7, Bon Temps is a California-style brasserie that includes a patisserie, raw bar and outdoor patio on a site that was once a Heinz 57 loading dock. Carson's first crack at leading an entire menu is molded by French culinary tradition and California's abundance of fresh ingredients.

The chef's initial dinner menu is divided into seven sections, with a raw bar leading the charge that features East and West Coast oysters served by the half dozen, as well as Maine lobster and blue prawns. Starters include an assortment of canapés such as uni caviar tartelettes and chicken liver gougères. A bibb lettuce salad includes crispy pig ears, while asparagus is served with sweetbreads and brown butter. A black truffle risotto made with abalone and bone marrow serves as the sole "middle endeavor" for guests to share, while entrees include a loup de mer served with shellfish and a lamb rib eye served with summer squash and Aleppo pepper. Large dishes presented table side include a 45-ounce prime rib eye served with housemade onion rolls and sauces, as well as a whole Jidori chicken served with sauce Perigourdine. 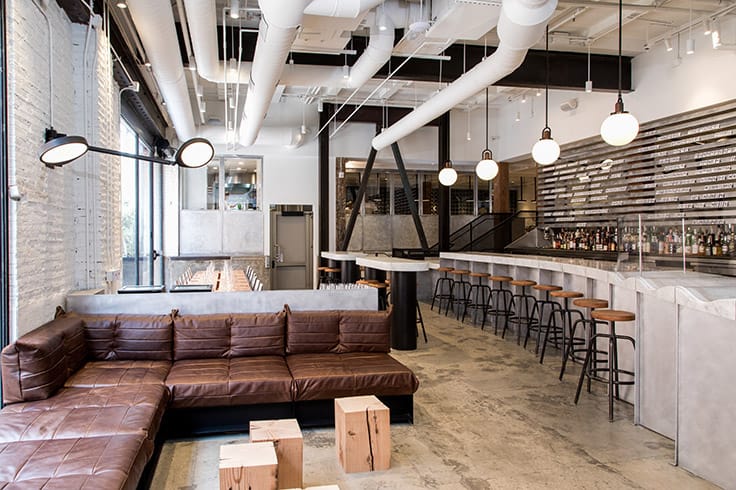 The interior of Bon Temps in L.A.'s Arts District.

"The beauty of the cuisine and menu is that you can build the experience as simply or opulently as you care to—Bon Temps has a raw bar and canapé options to start your meal with, or those offerings could be just an accompaniment to a glass of wine on a sunny afternoon on our patio. If you're going for a full meal, "the menu can run through simple preparations or a solo entrée with a side dish, all the way through to luxury ingredients and multiple courses in our wine room," states Carson.

The restaurant features two kitchen spaces, including one specifically devoted to baking bread and pastries. As expected, the chef brought years of dessert perfection to Bon Temps, with sweets like the traditional St. Honoré cake designed to be shared by the whole table. The dessert menu also includes s'mores served with oat gelato and a chocolate soufflé, the latter of which guests are suggested to order in advance. 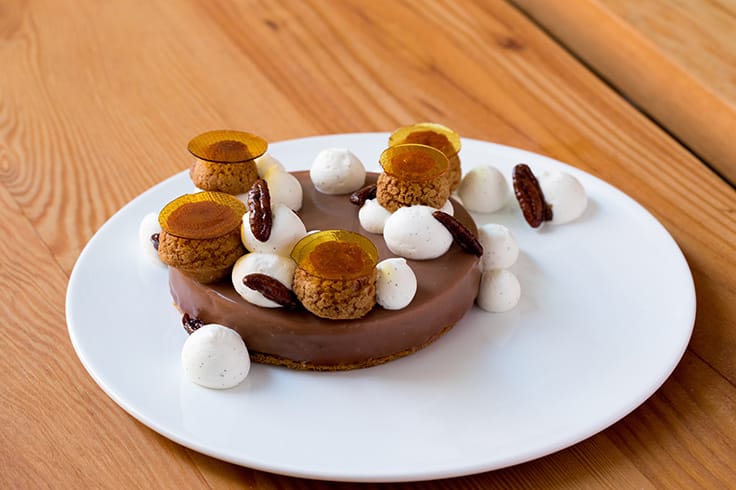 The traditional St. Honoré cake is designed to be shared by the whole table.

The cocktail menu is inspired by French drinking culture and is organized by what part of the meal the drinks are designed to accompany. Aperitifs like the crudité martini made with seasonal ingredients such as snap peas and cucumber are suggested to kick things off, while cocktails like the Calvados and pink peppercorn flavored Monaco Sunset are designed to enjoy with an entree or large format dish. There's also a selection of intriguing digestifs to settle the stomach post-dinner, including the Tête De Cuvée made with clarified milk and served carbonated like Champagne. The wine list overseen by Krystal Kleeman focuses on biodynamic and organic producers, with a robust selection of sparkling wines and rosés by the glass. There's a small selection of beer and cider available, including beers from L.A.'s own Common Space Brewery and Three Weavers Brewing Company.

Bon Temps is currently open for dinner service and just recently added coffee and pastries in the morning. There are also plans to offer a market inspired lunch menu during the afternoon. "We are a restaurant that grows in scope as the day progresses—starting with coffee and pastries in the morning and a counter full of lunch options [to go or for dining in] before reaching full realization in the evening with our composite raw bar, wines, beverages and dinner offerings," explains Carson.