Last summer, entrepreneurs and wine experts Morgan First and Tyler Balliet took the Big Apple by storm with the opening of Rosé Mansion, a science-museum-meets-interactive-wine-bar, conveniently located in the heart of Midtown Manhattan. The pop-up was so successful that the duo are bringing the fun back tomorrow, June 1—but this time guests can expect things to be on a (much) larger scale at 32,000-square-feet.

Located across from Penn Station at 111 West 32nd Street, guests can expect an entirely different experience than last year’s, ranging from ancient Egypt to a wine-themed amusement park dubbed "RoséLand."

Here, we chat with Balliet on all things Rosé Mansion and what excites him about the wine industry. (And don’t forget to purchase your tickets here—after all, #roseallday.)

Describe the new Rosé Mansion.
The idea of the last pop-up was to do a 14-room walkthrough experience—we still wanted to do that format, but this time we’re reinventing all of the rooms. And that only takes up half the space. And last year, we had a bar at the end of it. We’re not getting rid of the bar this year—we’re adding more excitement and more activities. We look at ourselves as reinventing the wine bar and wine tastings [in general], and how people experience wine while hanging out with their friends. And that’s what RoséLand is. You don’t have to leave the experience at the end. You can hang out—there are cabanas you can rent out, there’s a temporary tattoo station, we’re having a permanent tarot card reading. It’s like an adult carnival.

How did you into the wine business?
I started working two nights a week at a wine store in Boston in 2006. And I pretty quickly decided that I [wanted] to get into it because I really liked the people—especially the producers. The first couple of times I met people that grew the grapes, they were so chill, so down to earth and they cared so much. I also found a good market opportunity. I saw that there was a whole new generation of wine consumers coming up and the wine industry [at the time] didn’t really want to talk to them. They wanted to learn more about what they consume—and it’s not necessarily the wine industry’s fault, they just didn’t have the tools to do that [yet]. So I started writing about wine and throwing events and grew into what I do today. 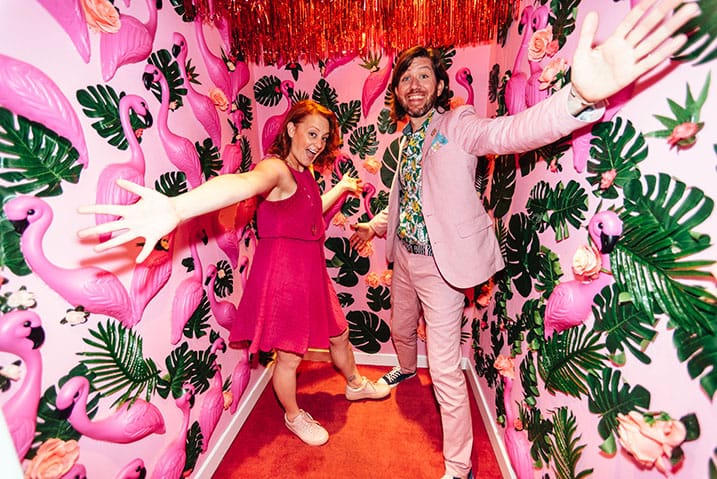 Morgan First and Tyler Balliet are showcasing 120 different rosé wines from every major wine region around the world.

How do you think the wine industry has changed since you started?
It’s an interesting time. Napa Valley obviously has done well for themselves and their high-end wines. They technically don’t need American consumers. And wine drinking in Europe has been going down consistently for 20 years, but in America it’s going up. Sales are going up and no one’s had to think about marketing. And now I think they’re starting to say, “Maybe we should’ve done something.” Let’s talk about labeling—what the hell is in wine? No one puts the ingredients or adds if they put outside things or chemicals on the labels. So I think you’re looking at a generation of people who are used to knowing what they’re putting into their bodies and are interested in that and has information at their fingertips.

Alternative packaging [has gotten] interesting, too. All the canned winemakers that I know—they all switched from wine distributors to beer distributors, and their sales have gone way up. Canned wine is becoming a replacement for craft beer. You can get a can of 13% rosé at a bar for $13 to $14.

So why did you open a wine-themed pop-up?
It’s going to sound stupid, but there’s not that much stuff to do with groups of friends anymore. There’s not many activities. People want to go out and have a couple of drinks and they want to do something and interact. I think that’s what’s really missing from our society right now—more of these activities. What we found [last year] is that people came to celebrate things, so we’re really leaning into that now. There was one Saturday where we had 14 bachelorette parties, and on average, we had 15 to 30 birthday parties every Saturday. I would ask people at the bar why they were there and the answer was, they came to celebrate—a birthday, or a promotion, or they had been living in New York for two years. Having timed tickets is really interesting too—it sort of kills flakiness. Everyone has to go through together. We look at this as a really fun bar night—your night starts with us, and then you go have your shenanigans.

Why did you choose rosé?
It’s a great vehicle for storytelling. Pink wines have been around since the beginning of wine. We’re doing this room on Cleopatra, and she used to drink Brachetto. Julius Caesar gave it to her and she thought it was an aphrodisiac. Cleopatra is a bad a**, and putting her in context [with this] is interesting because the difference between Cleopatra and the pyramids is like us and Jesus. It’s such a cool way to learn stories like that. She also had a secret drinking club where she and Mark Antony would get dressed up and prank all the commoners.

We’re doing a lot of geography and we’re going to do a New York room for local wine and showcase the two regions, [the North Fork and the Finger Lakes], and why they work—and it’s both because of the water. You get to learn about the world around you, you get to learn about science and history—but ultimately, it’s about context. I want to make people more comfortable with this product and I think the best way to do it is by giving people context.