Sarah Grueneberg on the Heart and Soul of Monteverde

The acclaimed chef credits her team for much of the restaurant's success.

The creation of the brigade de cuisine is credited to the legendary French chef Georges Auguste Escoffier. The staff of a restaurant, be they a dishwasher, server or even the executive chef, all have a role to play, and those positions are interconnected and dependent on each other. In this way a restaurant is like a ship and the staff its crew, manning the deck and keeping everyone onboard happy and safe, and the kitchen is its burning, thundering heart, powering the entire endeavor.

At Monteverde Restaurant & Pastificio, chef/owner Sarah Grueneberg says it's the pasta bar—the pastificio—that forms the heart and soul of the restaurant. "In Italian it means 'the place where pasta is made,' and so we wanted to have that be the heart of the restaurant." However, there's an argument to be made that Grueneberg is a big reason the restaurant has heart. She's an engaging presence and a skilled chef and leader, and she and her partners have put together an exceptional team. 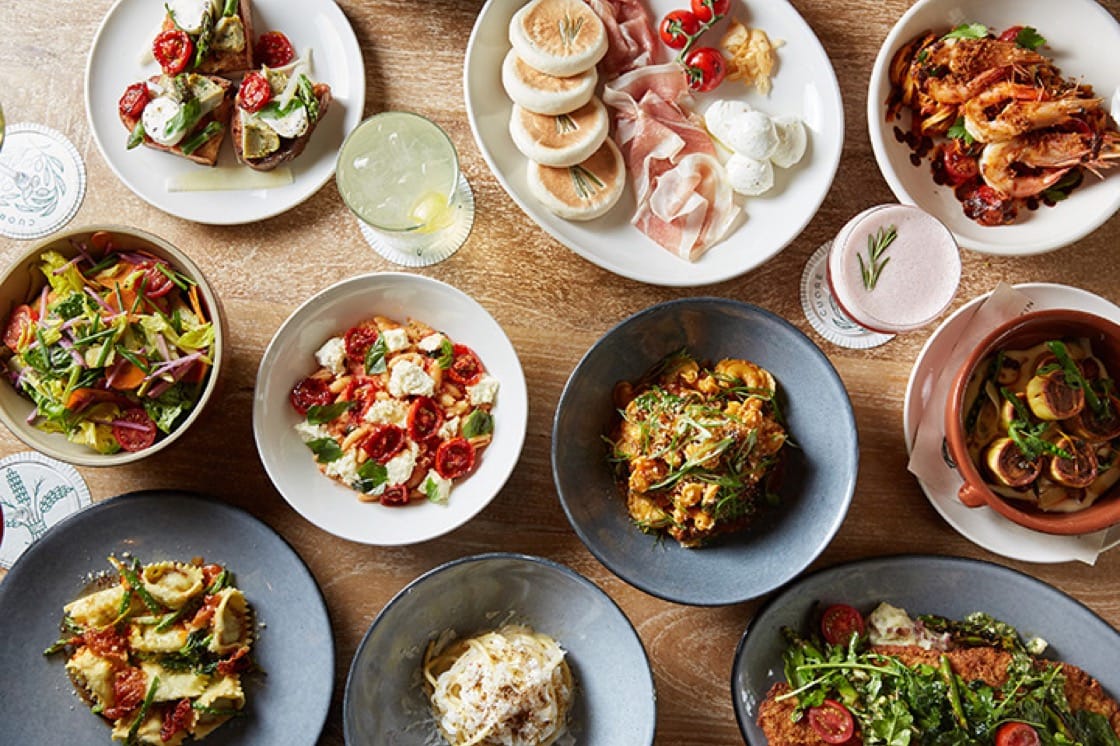 "Her signature Italian cooking [ . . . ] is what draws crowds," according to inspectors.

While she was raised in Houston, Texas, Grueneberg's family comes from the city of Victoria to the southwest, a rural area where, as she says, "Bumper stickers involve beef, oil, fishing and hunting." During her junior year of high school she decided to drop out, and after earning her GED that same summer she enrolled in the culinary program at the Art Institute of Houston. Grueneberg's first restaurant job was at Brennan's of Houston, where at the age of 22 she became the youngest sous chef in the restaurant's history.

During her time at Brennan's, one of the sommeliers recommended a move to Chicago, and after staging at the currently one-Michelin-starred Italian restaurant Spiaggia, she earned a place on the line. It was at Spiaggia where she met both her now fiancé, Jaime Canete, who co-runs Monteverde as managing partner, and the couple's friend and business partner Meg Sahs. 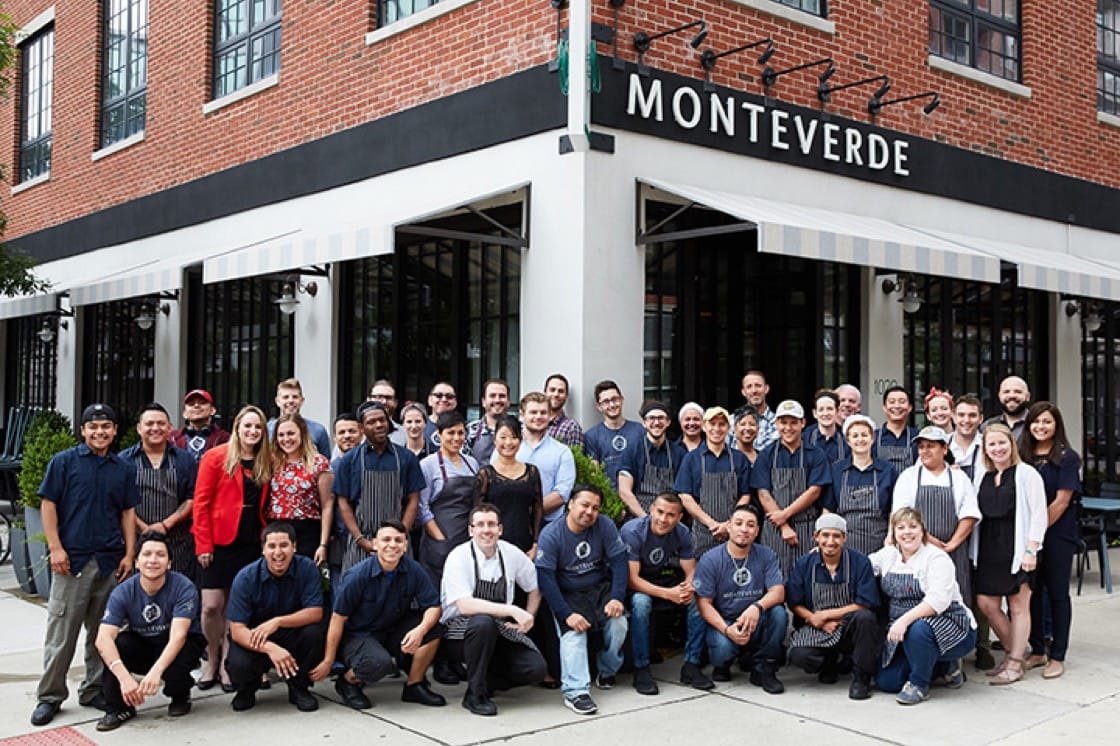 Grueneberg is quick to credit Monteverde's success to her co-owners and their team.

Grueneberg is quick to credit Monteverde's success to her co-owners and their team, which is both generous and fair—if perhaps a bit modest. She's excited about the work of Bailey Sullivan, who started with the restaurant as a line cook and was recently promoted to executive sous chef. She also notes her pastry chef Sarah Lamb, who has been with them since the beginning.

But if you're lucky enough to speak with Grueneberg—or to see her interact with her staff—it's obvious how important she is to the kitchen and how involved she is. The same goes for Canete, who can frequently be seen in the front of the house during service. The results of this kind of hands-on investment are evident. Monteverde, which is named for Grueneberg (her name and the restaurant's both mean "green mountain"), does as many as 300 covers a night and remains popular in a city with countless high-quality dining options. 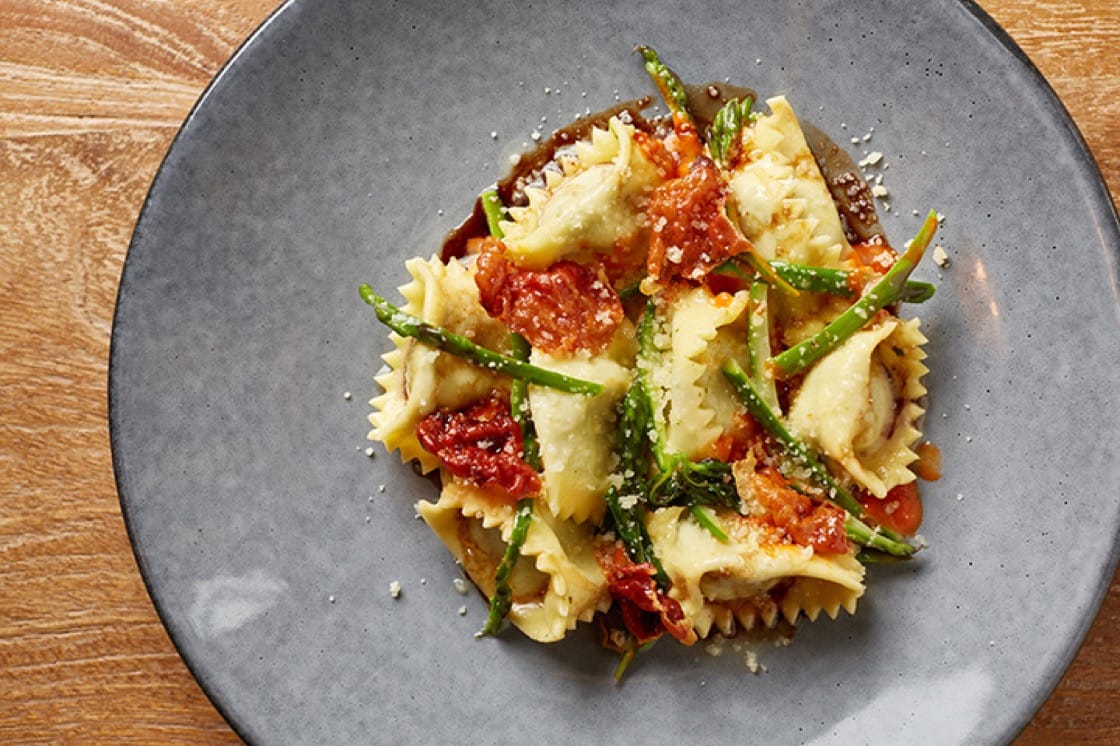 It doesn't hurt that the food is phenomenal, which in large part is tied to the pastificio. "The idea first came to me when we were traveling in Italy and I saw in three-Michelin-starred restaurants they were making and rolling pasta to order," Grueneberg explains. "I was like, 'Whoa, you can do that? How does that happen?'"

When you consider the scope of the endeavor, it's a pretty wild idea. While Monteverde does serve some dishes that use dried, imported pasta, the bulk is true made-to-order fare. Grueneberg says that when she started telling people about her concept they didn't explicitly tell her it was impossible, but it was clear it would be a challenge. "In a three-star environment they're doing 25 or 30 covers. We're doing 300." 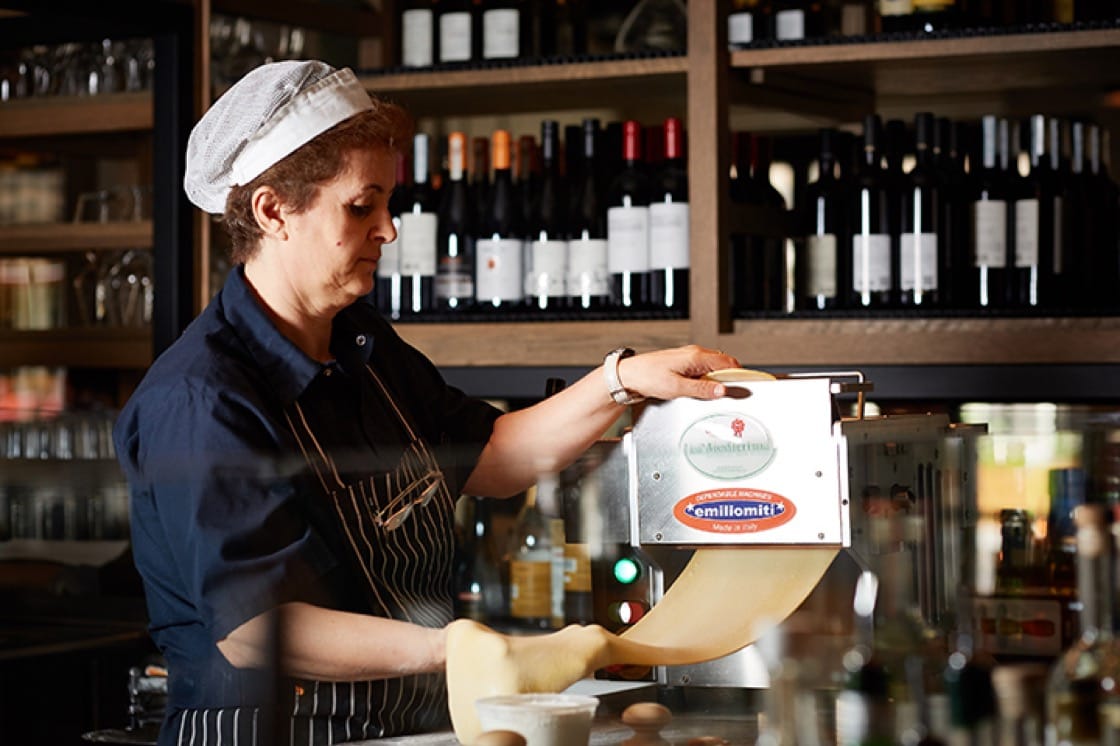 Besa Xhemo's 20 years of pasta making experience in Bologna was just what Grueneberg and team needed.

This is where the pasta makers come in. Grueneberg is quick to note Besa Xhemo—who is responsible for making, cutting and filling—and Maria Perez, who handles house-extruded pasta.

Xhemo's arrival in particular is described essentially as an act of providence. "I came upstairs from the basement and there's this family of four sitting there. There's a mom, a dad, a daughter and son. They're older. The parents don't speak English, only the daughter and son. And they're like, 'My mom would like a job. She makes pasta.'" Her 20 years of pasta making experience in Bologna was just what Grueneberg and team needed. 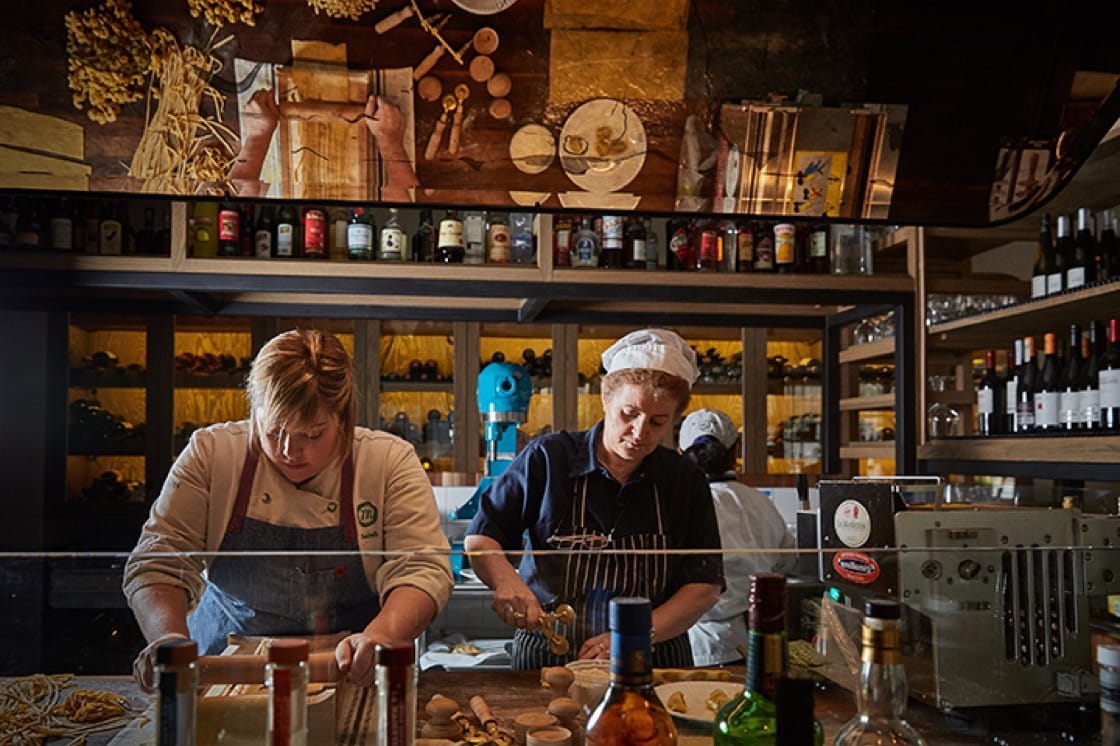 The 'pastificio' measures 11-by-3 feet, while a 7-foot-long mirror hanging from above so that you can see the action.

Xhemo and Perez have ample opportunity to shine. The pastificio measures 11-by-3 feet, while a 7-foot-long mirror hangs from above so that you can see the swift-but-unhurried hand movements of the pasta makers. The end result is that the heart of the restaurant is a warm, dynamic spot where the action is constant, laborious and easy to view. Pasta making is an art, and the pulling, cutting, shaping and filling is a hypnotic reprieve from the fire-tinged violence of your typical open kitchen. Dishes like agnolotti filled with sheep's milk ricotta are born on that table, which is served with savory Mangalitsa pork, sweet and acidic sugo and fava beans, while the sting of Calabrian chili and the fragrancy of parsley lift the spirits.

If Monteverde is a great place to eat, or even just to be, it's because of Grueneberg's ability to pull together so many skilled, unique people. The restaurant's stellar balsamic vinegar is courtesy of Andrea Bezzecchi, a third-generation vinegar maker who left law school to take over the family business following the unexpected death of his father. The restaurant's use of woks—a cross-cultural fusion of technique that produces stunning results—is credited to Bill Kim, who taught Grueneberg and her chefs how to achieve proper results by letting them stage at bellyQ. Because of Kim the restaurant has consistently had a wok-fried arrabbiata on the menu, a dish which marries the smoky burn of wok hei with ground Texas Gulf shrimp, garlic hot pepper oil and a changing type of pasta, such as squid ink spaghetti alla chitarra or the current offering of black and white tagliolini. 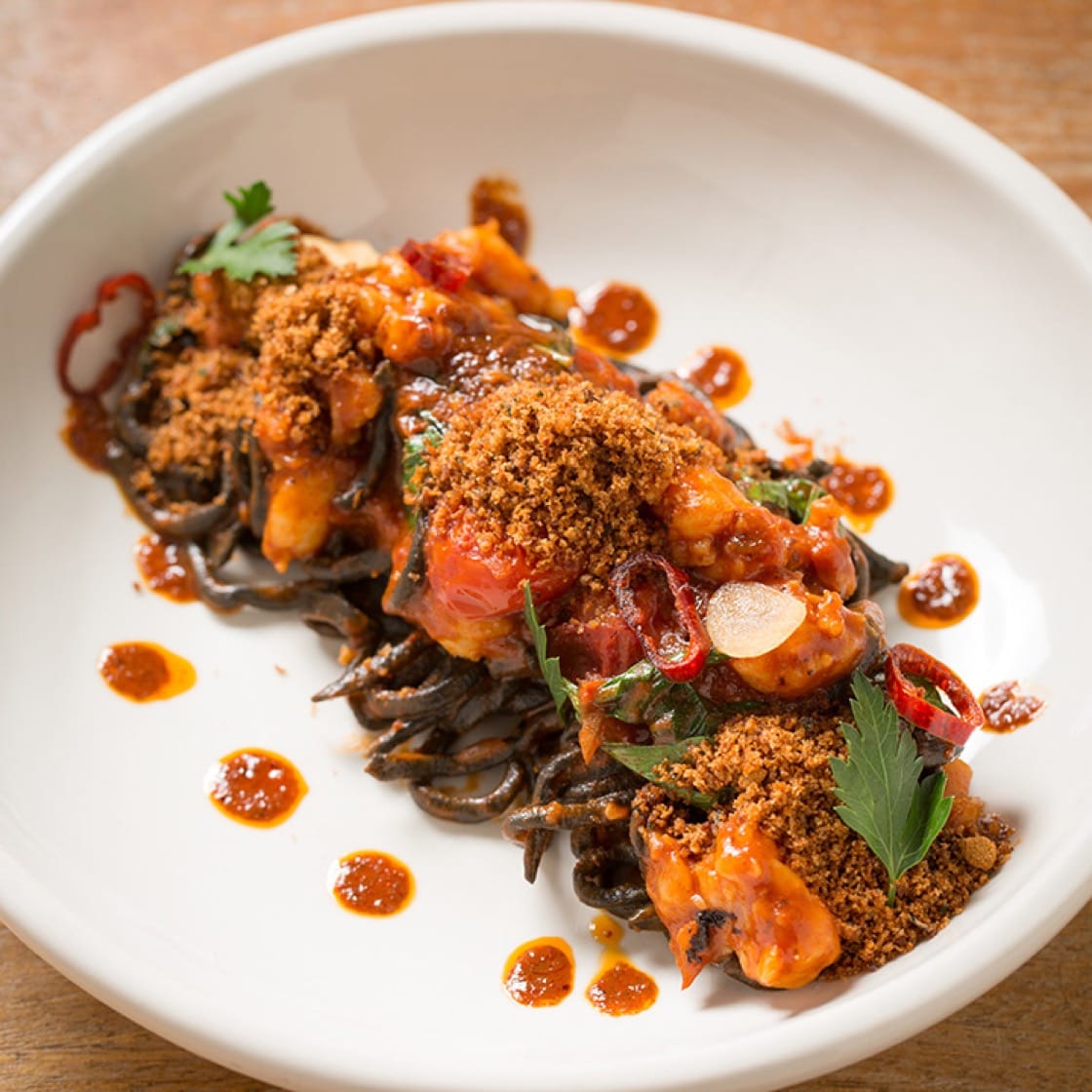 They have—without a doubt—pulled it off, garnering a number of accolades for Grueneberg herself and the restaurant at large, with "signature Italian cooking . . . [that] draws crowds," according to Michelin inspectors. But the awards and the recognition are thanks to more than just the kitchen's acumen. When Grueneberg yells across the room, "Jaime, why am I successful?," there's a thoughtful pause before he replies: "Because you care. Because you're patient. Because you're a teacher."