The Windy City has no shortage of gorgeous properties in which to lay your head. A Venetian Gothic landmark with a tiny speakeasy? Check—that's Chicago Athletic Association. Bold, sophisticated rooms that accommodate four comfortably? Check—The Robey. A hotel with a proper gallery and strong cultural programming? Check—21c Museum Hotel. Whether you're in Chicago with a deep expense account or for a fun, budget-friendly weekend, here's where to book a room.

Gold Coast
This building, a gently undulating glass tower, is pure luxe modernity, but the lower floors blend effortlessly into Chicago’s Gold Coast, thanks to the meticulously preserved façade of the 1920s-vintage Cedar Hotel. Such contrasts persist in the interiors as well; the gilded headboards recall the sort of hotels the pharaohs might have built, even as the rest of the furniture channels clean-lined Chicago modernist cool. The view commands the bulk of your attention, thanks to the floor-to-ceiling windows. Somerset, the restaurant, serves modern American cuisine in a split-level space that’s purportedly an homage to country-club culture, but is miles more stylish than that sounds. Meanwhile Devereaux is the rooftop lounge, a glorious indoor-outdoor space that’s perhaps at its best in the summer months, when the pool is open — but is nevertheless a worthy addition to the scene all year round. 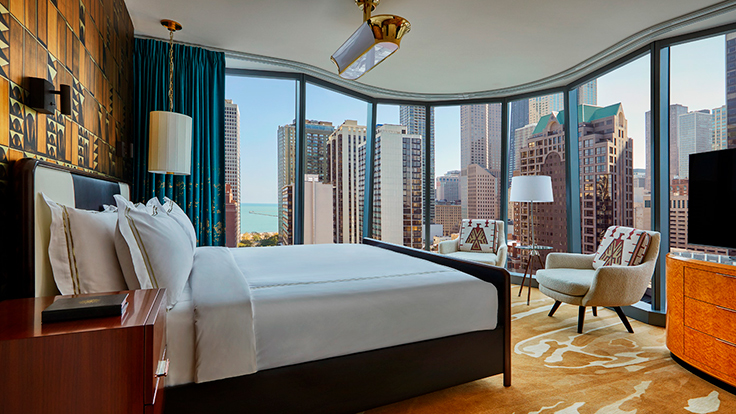 Gold Coast
The Gold Coast location is quintessential urban Chicago, and makes for the best possible introduction to the city. The best rooms look out over Lake Michigan, but the city view’s far from shabby, and all are framed by the Thompson’s typically sharp interior design. All mod cons, as they say, are present and accounted for, and some of the finer points are very fine indeed: 400-thread linens, rain showers, minibar snacks by Dean & Deluca. And while Chicago is legendarily food-obsessed, you won’t likely go wrong by dining in. Nico is a seafood-centric Italian offering under the direction of chef Paul Kahan, and beyond the hotel you’ll make do with the Gold Coast’s offerings — hardly an exercise in deprivation. 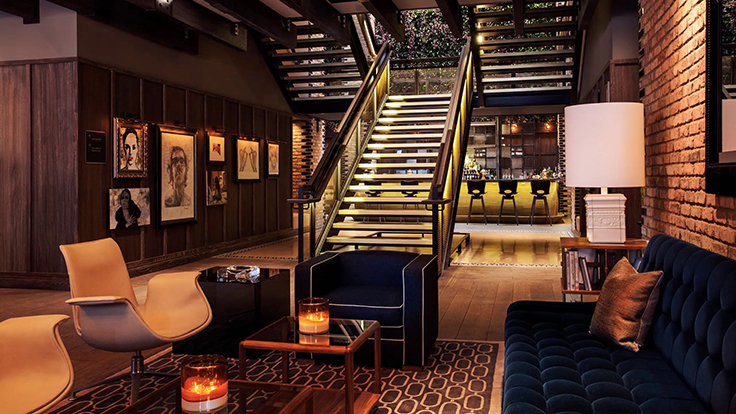 Wicker Park
The look here is cool and industrial with a vintage twist, the 89 guest rooms simply outfitted in wood, chrome, and frosted glass, with free wi-fi, charming Revo clock radios, proper writing desks, and bath products by Le Labo. The color palette is bold but sophisticated: these designers weren’t afraid to paint a wall black, and they’ve also experimented with slate gray and deep ruby red. Also present are twenty Annex Loft rooms, some of which sleep four on a pair of queen beds or a queen and a twin-size bunk bed. They’re perfect for larger parties, traveling bands, or just for spreading out a bit. Have a leisurely brunch at Café Robey, the modern American restaurant on the ground level, or slip away to the second-floor lounge, complete with its own bar and mod sectional sofas perfect for a couple of cozy pre-dinner drinks. 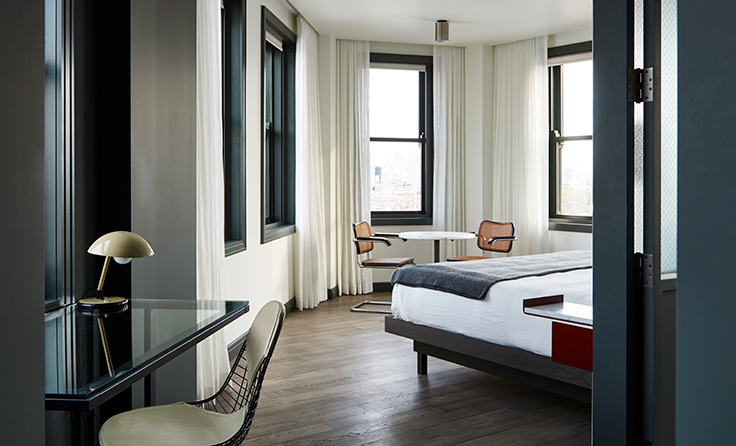 The Robey. Photo by The Robey

The Loop
This Venetian Gothic landmark, previously a private club for the city’s (male) movers and shakers, dates back to the final decade of the 19th century. After a renovation by architects Hartshorne Plunkard and an interior redesign by hospitality wizards Roman and Williams, the Chicago Athletic Association is a thoroughly up-to-date boutique hotel, in that retro-modern, luxury-boutique sort of way. It doesn’t hurt that you’re looking straight out over Millennium Park, but there’s plenty worth looking at indoors as well — much of what you see is custom-designed, what’s not is expertly sourced. A little bit of extravagance in the food and drink departments goes a long way. The Game Room and the Milk Room are (fraternal) twin speakeasy-style cocktail bars, the former featuring plenty of games and the latter largely substituting whiskey for milk. 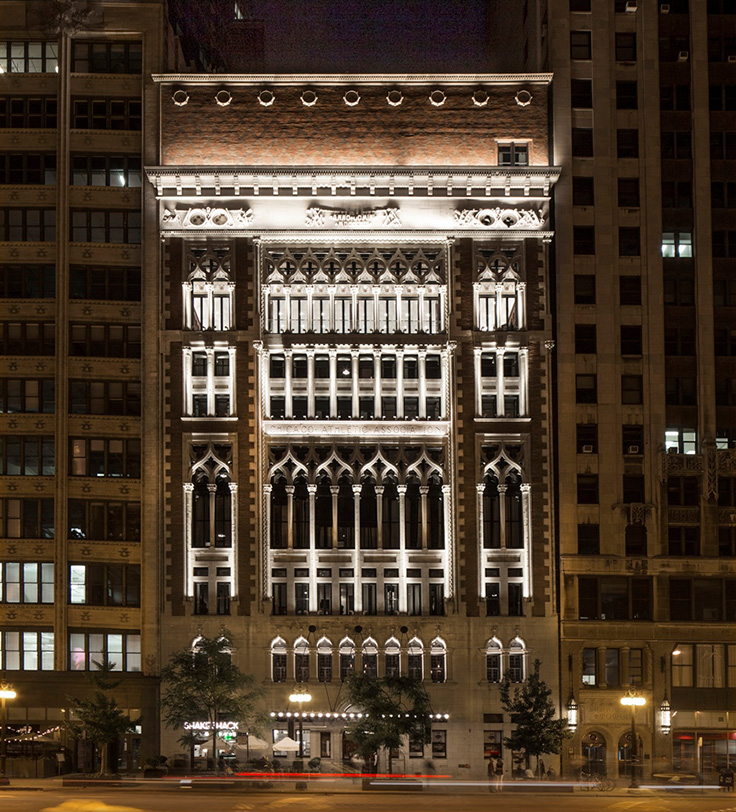 The Loop
New York certainly has its architectural charms, but only in Chicago can a hotelier reasonably hope to set up shop in a masterwork like the 1929 Art Deco Carbide & Carbon Building, with its stately dark stone and immaculate gold trim. Pendry Chicago combines contemporary boutique-hotel good looks with upscale comforts and impressive views of the distinctive Loop cityscape. Beds come dressed in Fili D’Oro linens, bathrooms clad in marble with custom-made bath products, and rooms come supplied with modern necessities like Bluetooth speakers and espresso machines, plus the ageless temptation of a well-stocked bar. The look is serious, dignified, but far from stuffy — it’s a tribute to the era of the building’s construction and to the Modernist golden age that followed. 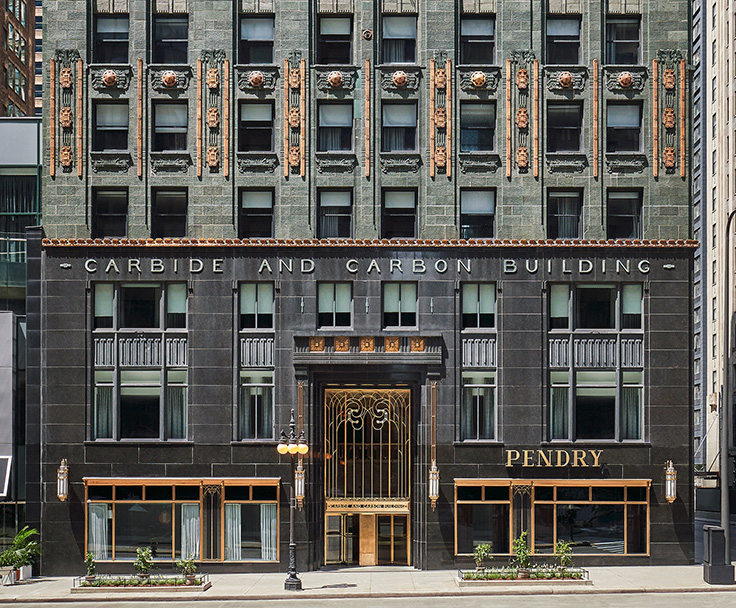 Near North Side
Part hotel, part hostel, the Freehand hotels pitch themselves at the tiny intersection of style and affordability. It helps when you’ve got designers of Roman and Williams’s caliber in your corner. While the word “hostel” might suggest it’s aimed squarely at the budget end of things, Freehand Chicago adds some considerations for business travelers, albeit style-conscious and sociable ones. The rooms vary from hostel-style shared rooms on up to City View Kings and Queens. The accommodations, of course, are only a small part of the Freehand package. This place, like its sister in Miami, is all about communal living, and even when you’re staying in a private room you’re doing plenty of mingling in the Broken Shaker, where guests and locals alike bond over craft cocktails and street food–inspired bites. Affordable, attractive, and highly sociable. Please note: Freehand Chicago contains both traditional hotel rooms and shared, hostel-style rooms; only the fully private hotel-style rooms are available for booking on Tablet. 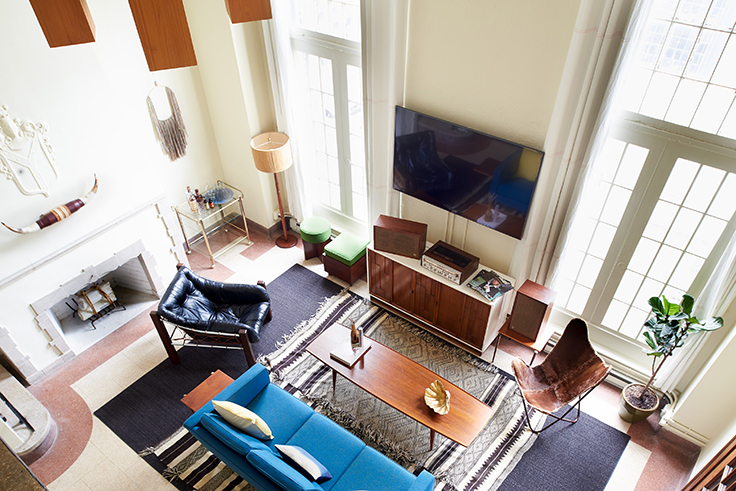 Fulton Market
Chicago’s Fulton Market neighborhood is the kind of post-industrial environment that’s perfectly suited to their 21st-century boutique-hotel aesthetic, and it’s here that a disused meatpacking warehouse has been transformed into the Hoxton Hotel, Chicago. The rooms, sensibly sized Snug, Cosy, and Roomy, are smallish but full of visual interest, from the brass fittings and leather headboards to the custom-designed bedding and the marble-and-tile bathrooms. And while you won’t mistake the Hoxton for a full-on luxury hotel, the comforts are more than adequate. The social life, arguably more important than the accommodations, is also much more than adequate. Cira is the all-day Mediterranean restaurant, while Cabra Cevicheria serves a Peruvian menu in a light-filled rooftop space, and Lazy Bird is the swanky subterranean cocktail bar — conceived by Chicago’s Boka Restaurant Group (of One MICHELIN Star Boka). 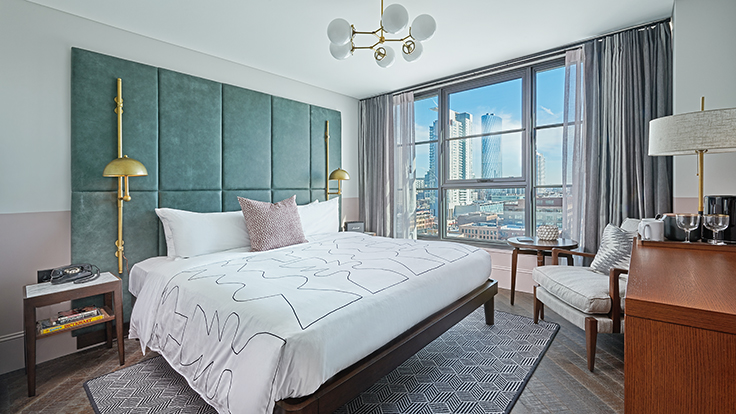 West Loop
More than three decades after the original restaurant collaboration between the actor Robert De Niro and the celebrated chef Nobu Matsuhisa opened its doors in New York, the brand’s hotels have become a global phenomenon, and the West Loop is graced with one of its very own; Nobu Hotel Chicago, fittingly, stands over a stretch of Randolph Street known as Restaurant Row. The rooms and suites are quite obviously Japanese-influenced, equal parts Zen and ultra-modern post-industrial — check out the cedar tubs in the suites—and they’re as luxurious as they are stylish, with plush beds custom-designed for Nobu and upscale conveniences like Nespresso machines and 60-inch smart TVs. 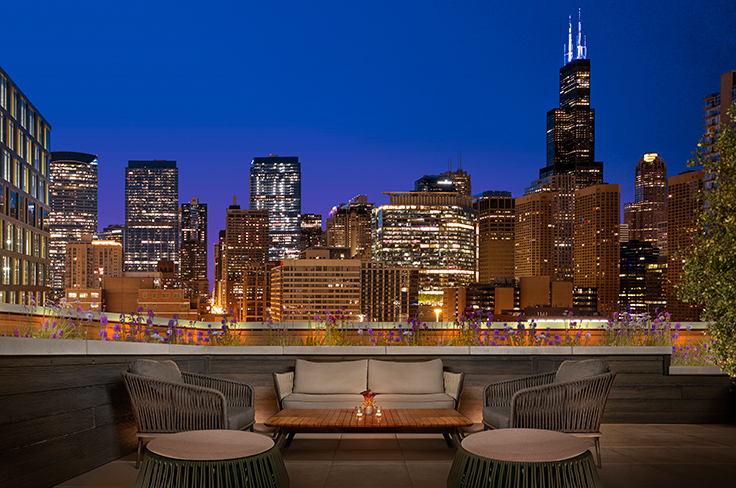 Magnificent Mile
Chicago may be best known for big business, but it’s also got a rich, vibrant arts culture that spans decades, and it's city’s high-culture side that's on display here. The 21c concept is one part luxury boutique hotel and one part expertly curated art gallery, both faithfully tailored to the location. In addition to a rotating exhibition that’s free and open to the public, the hotel offers regular cultural programming, and each guest floor showcases work by local artists. River North, the neighborhood, is conveniently central, and full of dining, nightlife, and entertainment options — you’re half a mile from the River North Gallery District, which boasts the largest concentration of art galleries in the US outside Manhattan. The guest rooms offer a reprieve from the busy streets below. All rooms feature high-end linens, original artwork, and premium Malin+Goetz bath products. 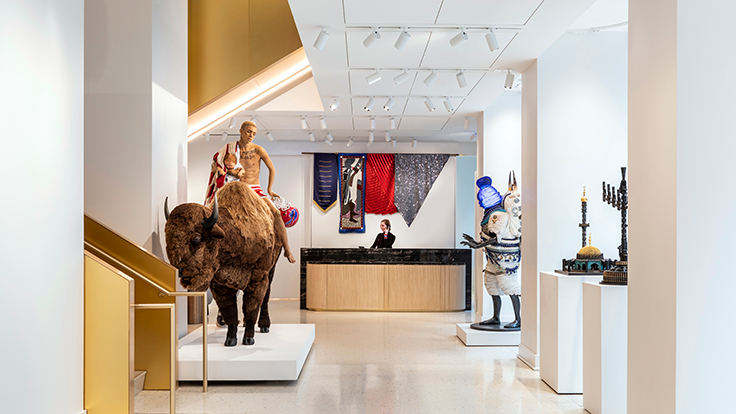 Downtown
In a restored 1928-vintage building inside the Loop, Virgin is threatening to kill off quite a few of the industry’s pet peeves all at once: they promise wi-fi that’s fast and truly free, a minibar with prices that match the corner shop, room service without the extortionate delivery fee, as well as plentiful closet space and lighting that’ll enable you to doll yourself up with confidence. Virgin also promises solutions to problems you didn’t know you had. The bed, apparently, is convertible into something of a multi-use lounge space, with headboards and footboards that turn the whole thing into a kind of inward-facing sofa. A nice touch, especially considering the abject uselessness of most hotel-room seating. And the rooms, even at the entry level, can be divided in two by sliding doors —great for traveling companions whose sleep schedules aren’t quite aligned. 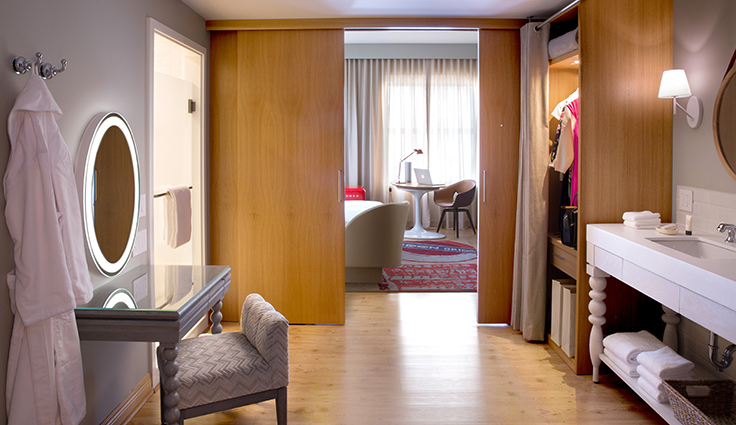