Get to know the chef behind the only Michelin-starred Mexican restaurant in New York City.

It was never Cosme Aguilar’s dream to become a chef. The young man from Southern Mexico’s first passion was fixing the electrical parts on cars. When he ran out of money—the plight of the overzealous 20-something—he came to the United States and took a job as a porter, initially to make money to go back to Mexico. But as time passed, he worked his way up the kitchen ladder. Today, Aguilar is the chef and co-owner of Casa Enríque, New York City’s first and only Michelin-starred Mexican restaurant. It’s an inspirational story, particularly because his English was all but nonexistent in the beginning. And as for whether he would want to go back to fixing cars: “I’m already here 20 years in February, and that’s 20 years of technology. I open a car right now, and I don’t even know what I’m looking at.”

Below, Aguilar’s story, in his own words. 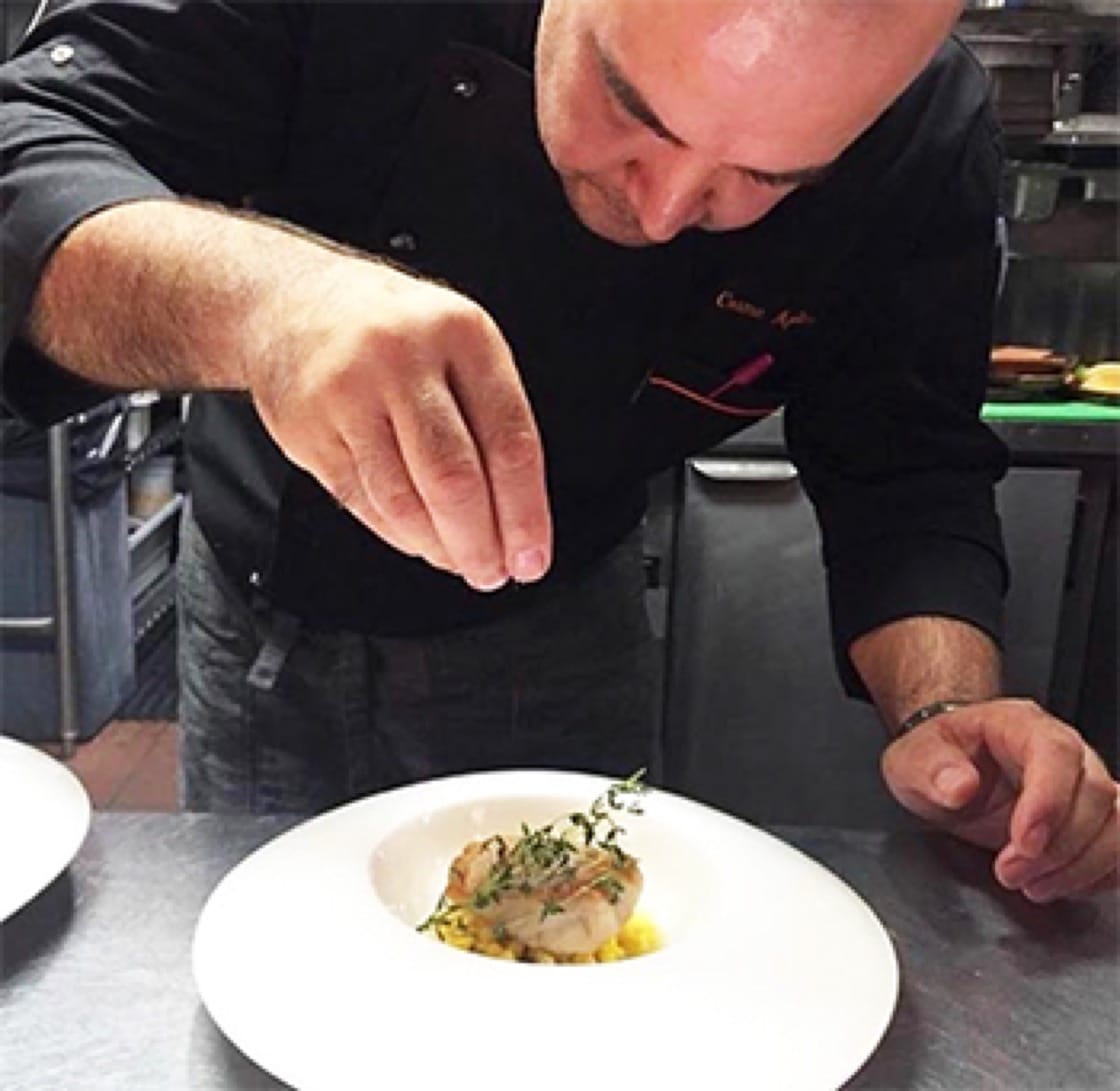 I was born one of six children in Chiapas in Southern Mexico. My mother was a great cook; she used to cook every single day. She opened a small, traditional restaurant before I was born but it was a lot of work—she closed it after she had my sister. She still sold food on Sundays, and every weekend we were slaughtering animals—a cow or lamb or pig—and she would make carnitas, chorizo, moronga, barbacoa and whatever else. People would come to the house and buy the food to-go. My brothers would help kill the animals. I was the only one crying because I was so small. (When you’re a kid, the animals are your friends.)

Since I was so young, she didn’t really teach me how to cook. My sister was older than me and was always in the kitchen with her. And she knew everything. It’s through my sister that I learned my mother’s recipes.

My father had his own business selling cars. When I was 15 years old, he opened an auto body shop—like a Pep Boys—and gave it to me. From the ages of 15 to 21 I had this business working on the electrical systems of cars and selling auto parts. But when you’re young and you get so much money, you spend it right away. So at the end of it all, I was broke.

Everybody in Mexico always wants to go to the United States. I wanted to go one day. I came to New York City to make some money so I could go back and reopen my shop and make it better. I looked for a job in the auto industry but I couldn’t find one. At that time I was not able to speak English at all, and I didn’t know anyone in the car industry, so it was hard. My brother, Luis, was working in a French restaurant; he called the chef and they gave me a job. So I started working in the kitchen as a porter.

I worked from midnight to 8:00 in the morning. The restaurant also did catering, and when there was a catering job the staff would come in at 6:00 in the morning. By that time, I was almost finished with my work; I started helping them and made things for them. The chef saw that I was very fast in what I was doing and said, “You’re not going to work to clean the kitchen anymore. I want you working with me.” I said, “Okay!” (I was having trouble sleeping in the daytime anyway.) Before I started working in the kitchen, the only meal I could make was scrambled eggs. I learned everything there.

The chef would always give things to do—cut this or cut that, little by little. Once I saw him make a chocolate mousse and I wanted to try it. He handed me the recipe and I made it and I was like, "My god this is so good." It was the first thing I made that I was proud of. There were other things, like coq au vin, that takes longer to prepare, but this one was quicker. 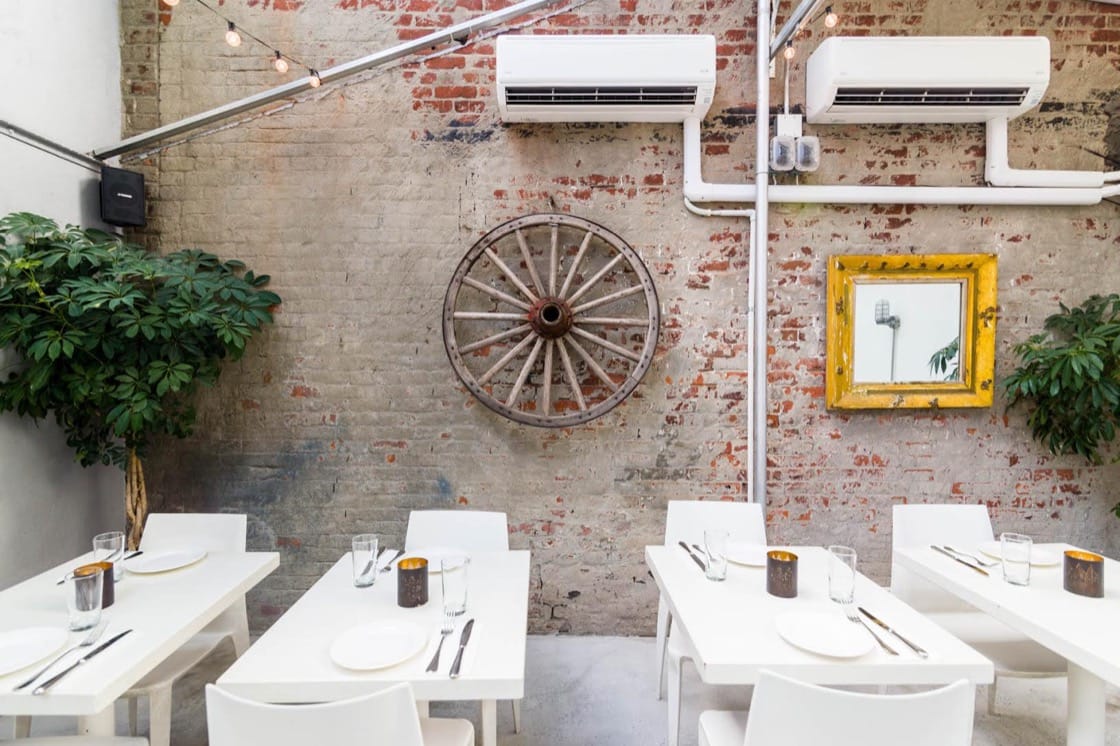 The outdoor patio at Casa Enríque.

I worked with him for a year until that restaurant closed. Then we moved and he opened Le Gamin. I started as a line cook and from there it was growing, growing, growing. Then I met Winston Kulok, who became my and my brother’s boss at Café Henri and Bar Henry. (Luis managed the kitchen.) Kulok is now my business partner.

He’s a real estate guy and owned a small spot in Manhattan. He knew one of the owners of Le Gamin and used to visit a lot. He loved the place. At that time it was very famous and it was very busy. He said to the owner, “You know I have a little place like yours around the corner. I want to open a café like yours. Is that something you want to do with me?” And the owner of the restaurant agreed. They tried it for a year and it didn’t work. They just had different ideas.

My brother moved to Winston’s place and stayed with him after the partnership broke up. Two or three years later, Luis asked me to work with them. I was already a chef after all—I started cooking at the restaurant.

It was Luis who came up with the idea of opening up a Mexican restaurant. We already had this space—we used it for catering and we cooked everything for Bar Henry before it closed. The owner was leaving and said we should take over the lease, so Winston made a deal. We had the place and we didn’t know what to do. Open a French bistro? A French restaurant? In the end we decided that we needed to open something that served food reminiscent of what my mother used to put on the table.

At first I thought, "Oh my god, but I don’t know nothing about Mexican food. All I know is French food." I knew Mexican food, of course, I had just never worked in a Mexican restaurant. To make the menu, I asked my mom and my aunt how to do certain things. The guys in the kitchen were also Mexican and helped out, noting how their mothers cooked.

That happened two years in a row, and the third time, we lost the Bib Gourmand. I was devastated—depressed. I told myself I would work harder.

Two days later I went to cook at the restaurant alone; I was making mole paste. And it was only me, listening to my music and cooking. I didn’t hear my phone in my pocket when it rang. We have a phone in the kitchen, and only my brother and people that I know have that number. I heard it ring and picked it up.

“What are you doing?,” Luis asked.

“You have to sit down, I want to tell you something,” he insisted.

I sat down and prepared for the worst.

“Brother, you just got a Michelin star.”

I thought he was joking. “Come on, this is not time for you to play!”

“No, Cosme, they gave us a Michelin star.” And he started crying, and that is when I realized that he was completely serious.

And I started jumping, alone in the kitchen. I was so happy.

Even now, if I need something I’ll call my sister—Adriana—and ask how to make it. And when she visits the restaurant from Chiapas and tries a recipe she’ll say, “Oh wow, I gave you that recipe, but you made it better.”