Earlier this year, B.K. Park and team were awarded a MICHELIN star for his new omakase restaurant Mako in Chicago’s West Loop, a restaurant he calls “a sushi chef’s dream.”

Park had been waiting for this moment for 10 years—not for the fame or the accolades, but to introduce the highest level of sushi to his guests.

“This is my best possible sushi,” he says. “But even 10 years ago it was too early.”

Park pushed them gently at Juno, his Lincoln Park restaurant that Chicago Tribune critic Phil Vettel called “one of Chicago’s very best Japanese restaurants.” There, he had a seven-seat omakase counter in addition to the regular menu and seating. (Now that Mako is open, Juno no longer serves omakase). 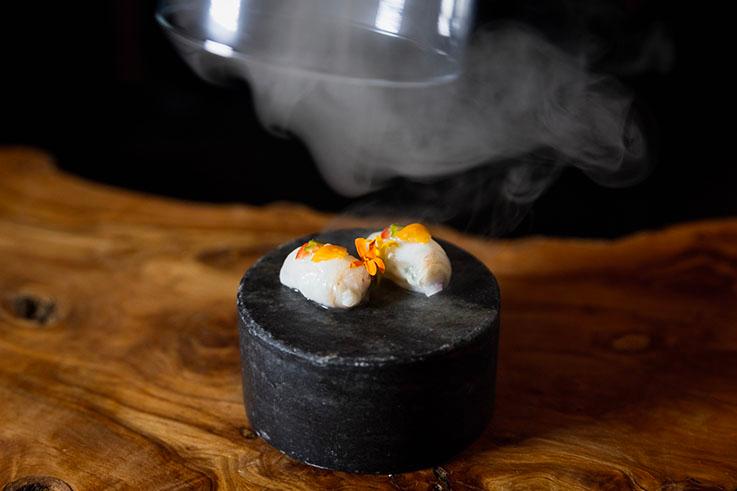 The funny thing is, by the time Park felt his guests were ready for the full experience at a new location, other chefs around Chicago had the same idea. Kyoten, Takeya and Yume all opened around the same time. Park was surprised by the simultaneous openings, but not upset.

“When I found the Mako space, I thought, I’m going to open this new kind of restaurant in Chicago. I was worried about it,” he says.

He saw similar concepts opening at the same time as encouragement that the city was ready. Many guests at Mako are experiencing omakase for the first time, something Park finds delightful.

“They’re coming into something they don’t have experience with, but leave feeling special.”

Once upon a time, Park was also new to omakase. He grew up in South Korea where he studied hotel management, which brought him to Chicago for additional schooling. Over summer break from Harold Washington College he started serving in a restaurant, which turned into helping in the kitchen and meeting the cook’s sushi chef friend.

“I still remember 20 years ago, it looked so simple but was very hard,” he says. “There were a lot of details and it made me frustrated so many times, but I really loved it.”

When he teaches young chefs now, he reinforces those details. “When I give them a tuna I want them to understand how to treat the fish, how to cut the fish, I really focus on that,” he says.

Mako’s menu and tranquil space are traditional with a few curveballs. Park says his menu is not 100-percent Japanese-style. The nigiri is served with different types of soy sauce, for example, and there are three desserts including a palate cleanser. He thinks his menu has more variety than other similar restaurants, he focuses on seasonal ingredients, and he’s willing to incorporate other styles. “I want to have good food, and a good feeling, that’s it,” he says. “It doesn’t matter if it’s American-style, French-style. If there’s something I can combine together and it’s good, I will do it.”

There are also 22 seats, which makes Mako larger than the typical omakase restaurant, and they notably don’t all wrap around a bar. A table with seats facing each other is available because Park found parties with more than four people had difficulty conversing in the bar setting. It can be reserved for business meetings or special occasions.

“Basically, ninety-percent of guests are celebrating something, and I really want them to feel like it was a memorable experience,” Park says.

He’s thrilled Chicagoans are embracing omakase, and sees only growth for the future.

“As people get more educated they will appreciate it even more,” he says. “It’s exciting to see.”