“Singaporean director Josiah Ng had initially wanted to chronicle Restaurant André’s rise to the top but there was a sudden change of plans along the way," says chef André Chiang on his new documentary "André Chiang & His Olive Tree". The angle eventually taken in the film, which was released in Taiwan at the end of August, is different from what was first imagined.

Chef Chiang left many in shock when he abruptly announced the closure of Restaurant André, a two MICHELIN-starred restaurant in Singapore, after marking its seventh anniversary in October 2017. The restaurant served its last meal on Valentine’s Day, 2018. This turning point was recorded in "André Chiang & His Olive Tree", along with the chronicles of interactions and relationships between Chiang and his restaurant team, family and mentors. 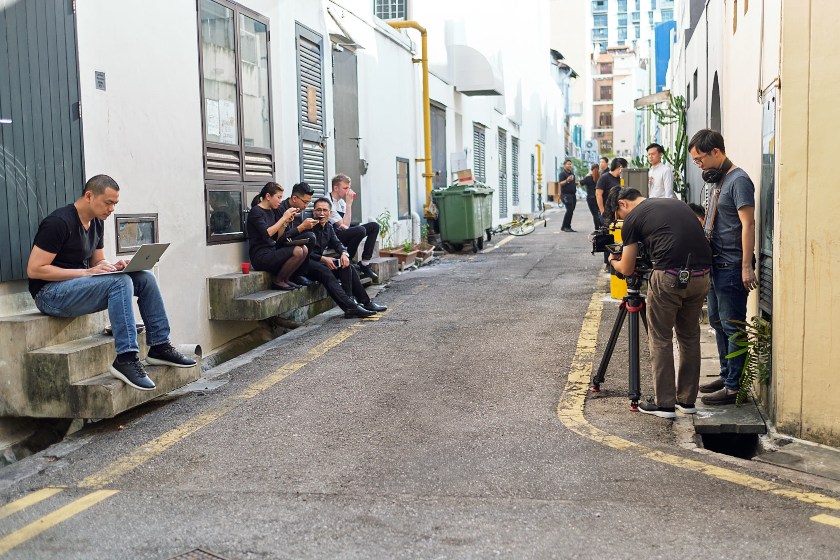 Singaporean director Josiah Ng initially intended to chronicle Restaurant André’s rise to the top but there was a sudden change of plans along the way. (Photo: Activator Marketing Company)

“One day, I arrived at the restaurant and saw everyone hard at work, with everything exactly the way I wanted: the lighting, temperature, smell, sauce, and even the weather – each were perfect. I sat on the couch and watched them all with a sense of satisfaction. Every individual set higher standards than I did, which was a situation I had never been in before," Chiang recalls. “That was the night I announced the closure of Restaurant André.” 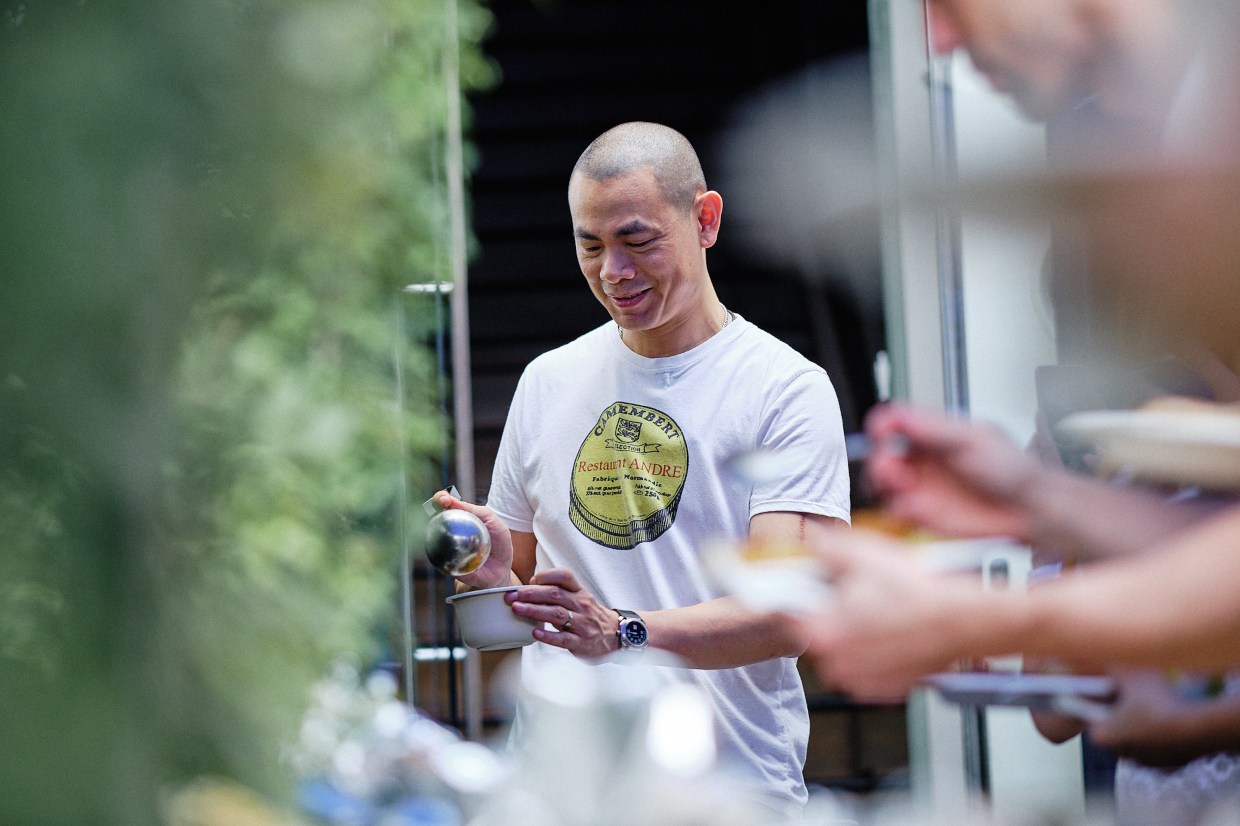 At the farewell party on Restaurant André’s last day of operations, Chiang served a symbolic dish: his homemade beef noodle soup. That was representative of a turning point in his life, of his return to his hometown to discover himself and his origins.

Beef noodles were also Chiang’s starting point. In his days as a culinary student, he was in charge of making the dish during his traineeship at The Landis Taipei Hotel. 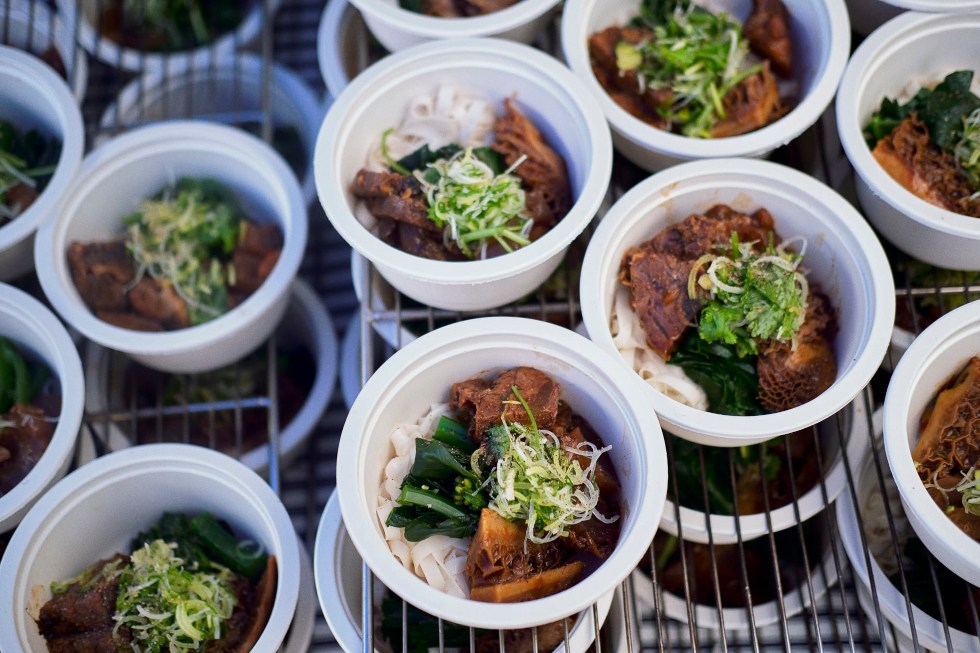 Such is the significance of this iconic dish, we engaged Chiang in a chat to delve deeper into what the soup means to him.

Why did you decide to make beef noodle soup for the media and guests on Restaurant André’s last day?

I guess I wanted to tell everyone on the last day: this is where I came from. I felt it was important to announce that I wanted to return to my origins in order to know myself and Taiwan better. Beef noodles is a very distinctive symbol of Taiwan. 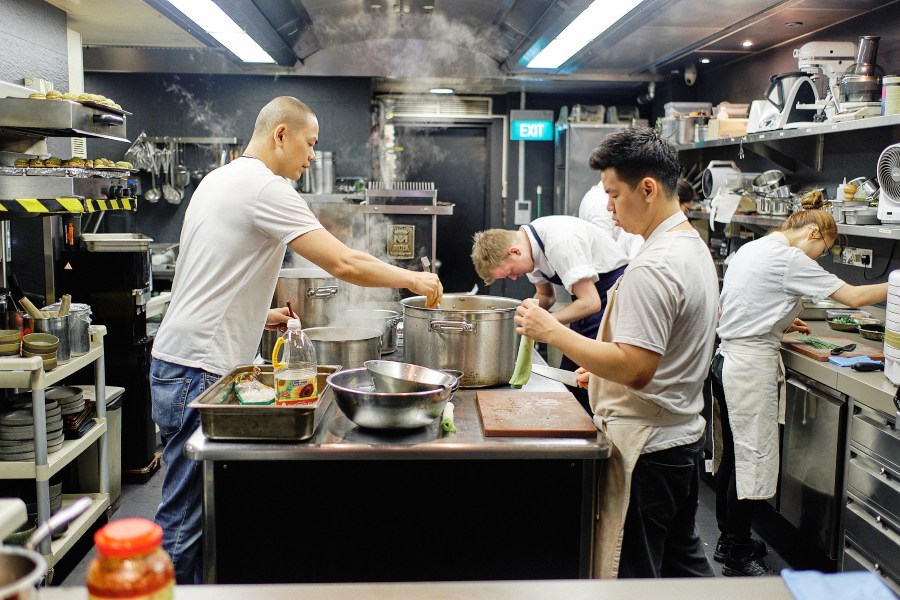 My method is labour intensive and it takes half a day for me to make the soup from start to finish. For the farewell party, I started preparing for it after I finished work that day and was only done with it around two in the morning.

My beef noodle soup is made with braised beef but has an almost clear profile – a little like a beef bourguignon with the feel of Tainan beef soup. I use similar ingredients such as carrots, radishes, scallions, ginger, garlic, and rice wine; boil beef bones to produce the broth for braising, strain it many times, and then mix the other beef broth I’ve boiled with this braised broth in equal portions. The result is a dark-coloured soup without the dregs of its ingredients, which makes it light and refreshing. Other ingredients such as the beef tendons and beef tripe are braised separately. 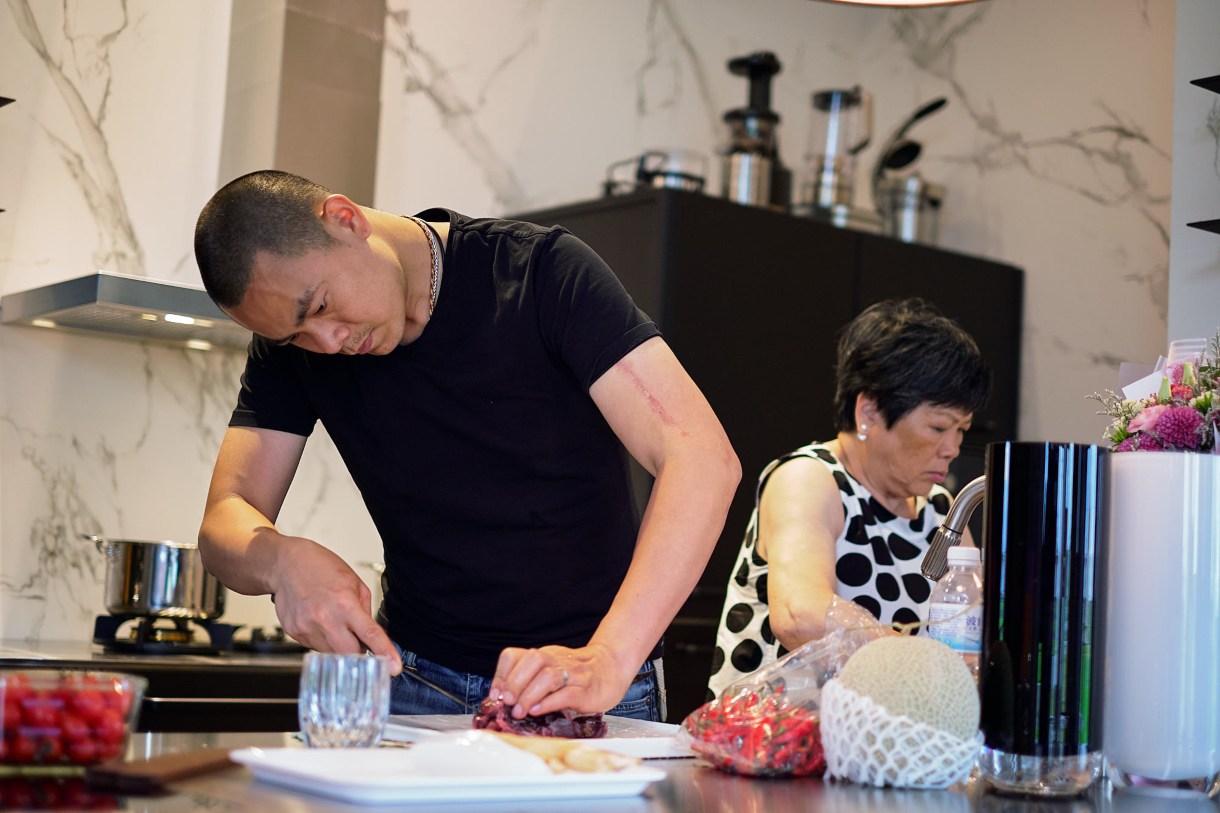 Please share your memories around beef noodle soup with us.

When I was little, my mother used to make beef noodle soup. During my stint at The Landis Taipei Hotel’s La Brasserie, I was put in charge of making beef noodles. While working at The Sherwood Hotel Taipei, I had to make that too.

Living abroad, there were often many (leftover) cuts of beef trimmings at the restaurants. At the same time, ingredients like onions, ginger and chillies could be easily obtained, so I started making my own soups. Without the huge pressure in mind, all it had to be was delicious and satisfying. As I gained experience in cooking, I found better cuts of beef and better methods of cooking.

RAW specialises in deconstructing and reinterpreting elements of Taiwanese culture and cuisine. However, this does not appear to have involved beef noodle soup in the past five years. Why is that so?

We are less likely to make beef noodle soup at RAW because doing that would be like serving up milkfish at RAW: too pretentious because both have already made very firm and definite imprints in the minds of people.

For instance, we're making pork floss buns this season (note: this dish is in RAW's summer menu entitled Bourguignon/ Brioche/ Béchamel), which I find interesting: why do Taiwanese love to eat "pang" (Taiwanese for bread)? It's something from the West, but doesn’t come across to us in an offensive way. There’s something interesting in there and not as straightforward as it might appear.

Beef noodle soup, on the other hand, is very straightforward, with not much room for contemplation or experimentation.

READ MORE: The First Day We Got Our Stars – Alain Huang of RAW 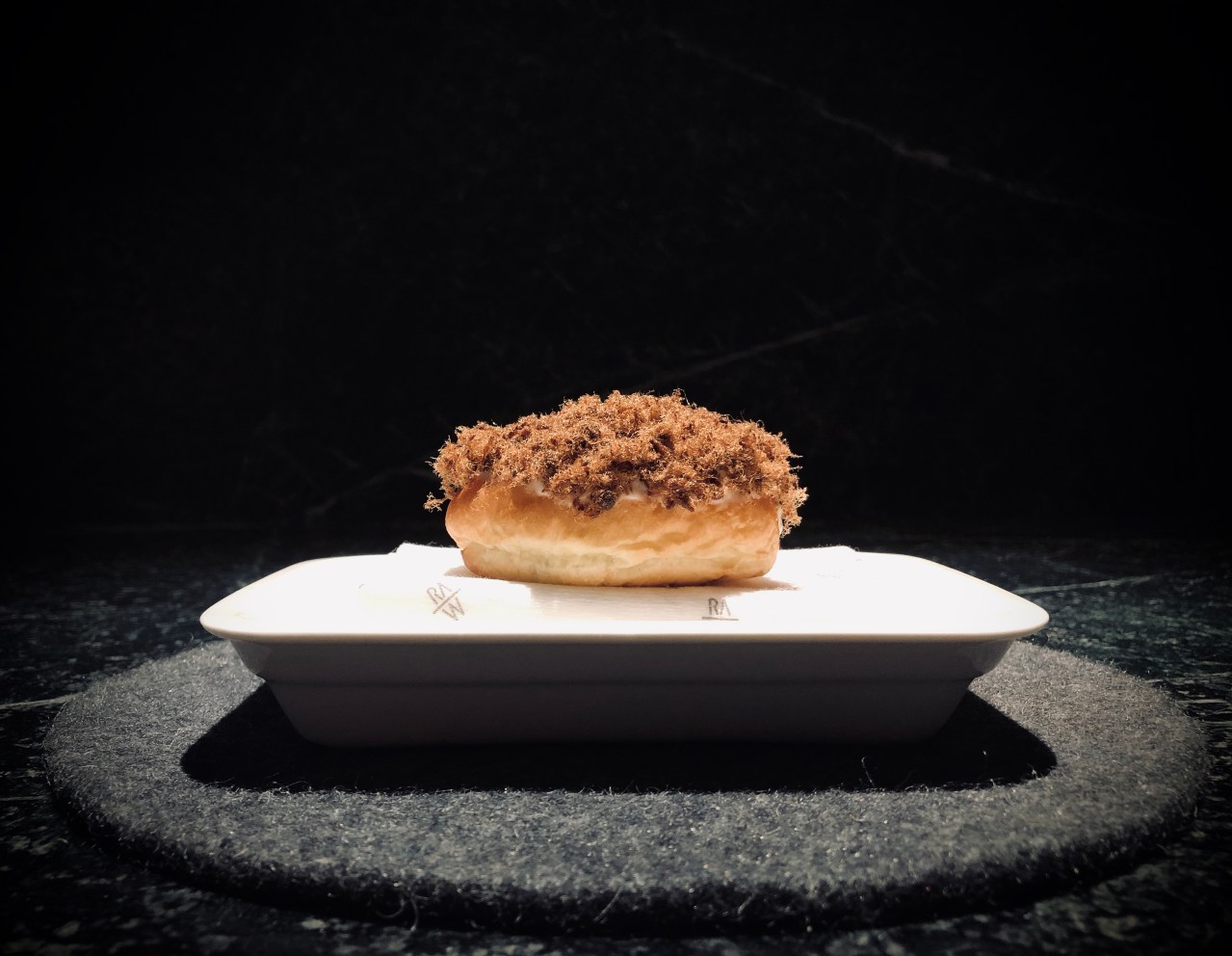 It's been two years since you came back to Taiwan. How many of the goals you’d set back then have you achieved?

I came back to Taiwan because I want to pass on my experiences and leave a legacy. For example, I've been working on a A Dictionary of Taiwan's Food and Cuisine as well as A Glossary of Taiwan's Flavours, and I hope to connect with top people and brands around Taiwan to exchange and collaborate with one another.

And then there's "André Chiang & His Olive Tree". After the film’s release, I was overwhelmed by the many messages I’d received from people I know or have yet to meet. They shared with me their thoughts and inspirations about the film and how the film touched their heart. Some of which turned out to be very lengthy! I find this to be the most significant thing about documentaries: that there may be no script or actors, but are nonetheless powerful and impactful.

READ MORE: 5 Indigenous Ingredients from Taiwan to wow your tastebuds

This story is written by Hsieh Ming-ling and translated by Tang Pin-Ji. Click here to read the original article.