The culinary sphere was shaken by renowned French chef Joël Robuchon’s death last August. At 73, Robuchon was one of the world’s most celebrated chefs, with an illustrious career that spanned almost six decades, having run his eponymous chain of French fine-dining restaurants in more than 10 cities around the world. His chains, Joël Robuchon and its more casual sister, L’Atelier de Joël Robuchon, have clinched more than 20 Michelin stars.

Over the years, the culinary maestro has served as a mentor and father figure to generations of chefs. Some of them have gone on to become world-famous names in the culinary world, such as British celebrity chef Gordon Ramsay and French chef Eric Ripert. That is just the tip of the iceberg. Robuchon has trained and supervised countless of chefs in the French cooking arena, from his first restaurant Jamin that he started in 1981 to his L’Atelier de Joël Robuchon chain that he started in 2003 after coming out of retirement at the age of 50. 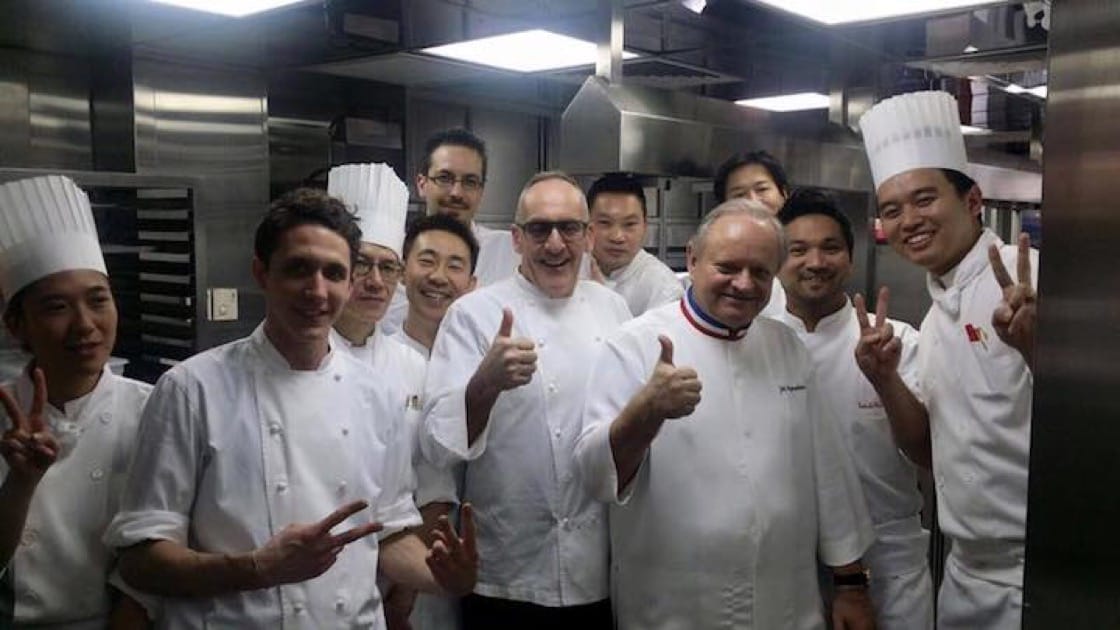 This fine-dining spirit continues to be on full display at a string of dining events around the world held to pay tribute to Robuchon. One of them is Robuchon au Dôme Gala Dinner, which was held on 20 October in the three-Michelin-starred Robuchon au Dôme in Grand Lisboa Macau. Four chefs from Joel Robuchon restaurants around the world teamed up to present an eight-course dinner that was attended by more than 50 diners. 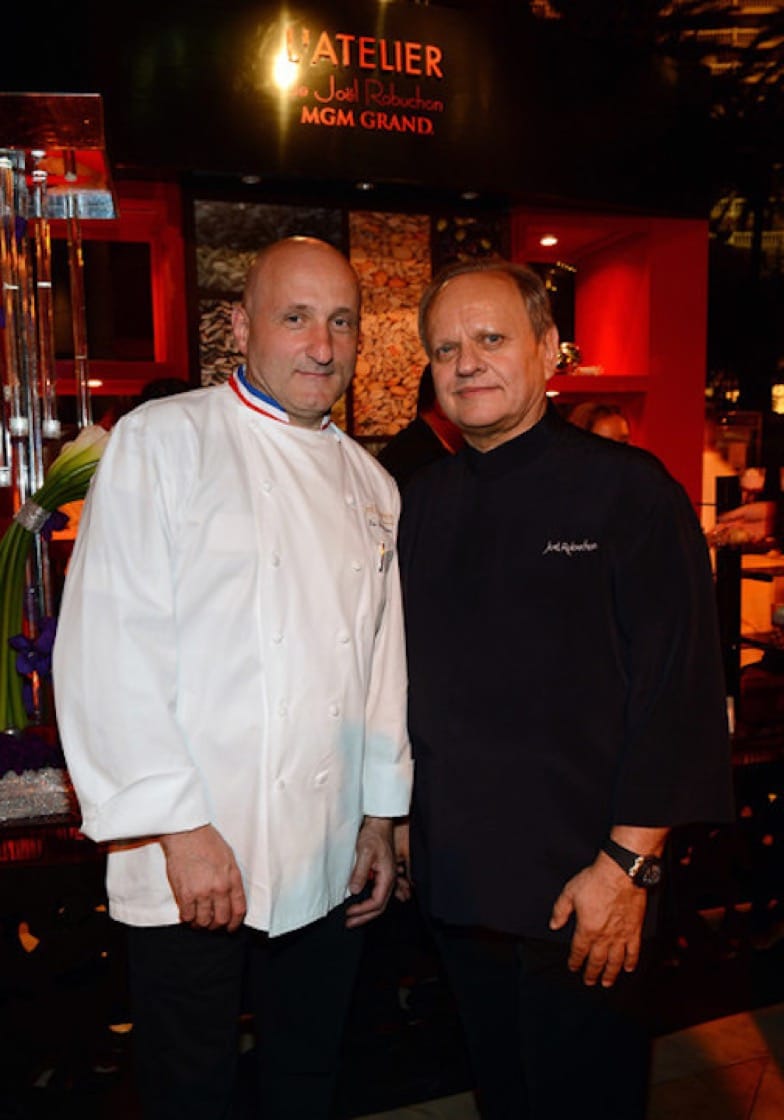 Bouchenoire (left), who had been Robuchon’s right-hand man for 35 years, started out as a chef de Partie at the now-defunct Jamin. He was assigned to the cold starters station, where he learnt how to cook the iconic starter, Le Caviar.

Unsurprisingly, the signature starter is one of the dishes on the tribute menu. Bouchenoire says: “Le Caviar best represents Robuchon. It is complex dish that is a perfect harmony of noble ingredients and subtle tastes of lobster, caviar and cauliflower.”

On Robuchon’s lasting legacy, Bouchenoire, who trains teams from the Joel Robuchon restaurants worldwide these days, reflects: “His constant search for perfection, his ability to

always innovate and his passion for products have given him worldwide recognition and respect.” One of the biggest lesson that Bouchenoire has picked up from his mentor is to “never give up”. He says: “Being rigorous and having good team spirit are strong values that I have learnt from Robuchon and I am trying to teach them to my restaurant teams.”

“We are just trying our best to ensure that Robuchon’s cuisine can be immortal around the world. But not having him by my side gives me an overwhelming sense of loss. He is irreplaceable.” 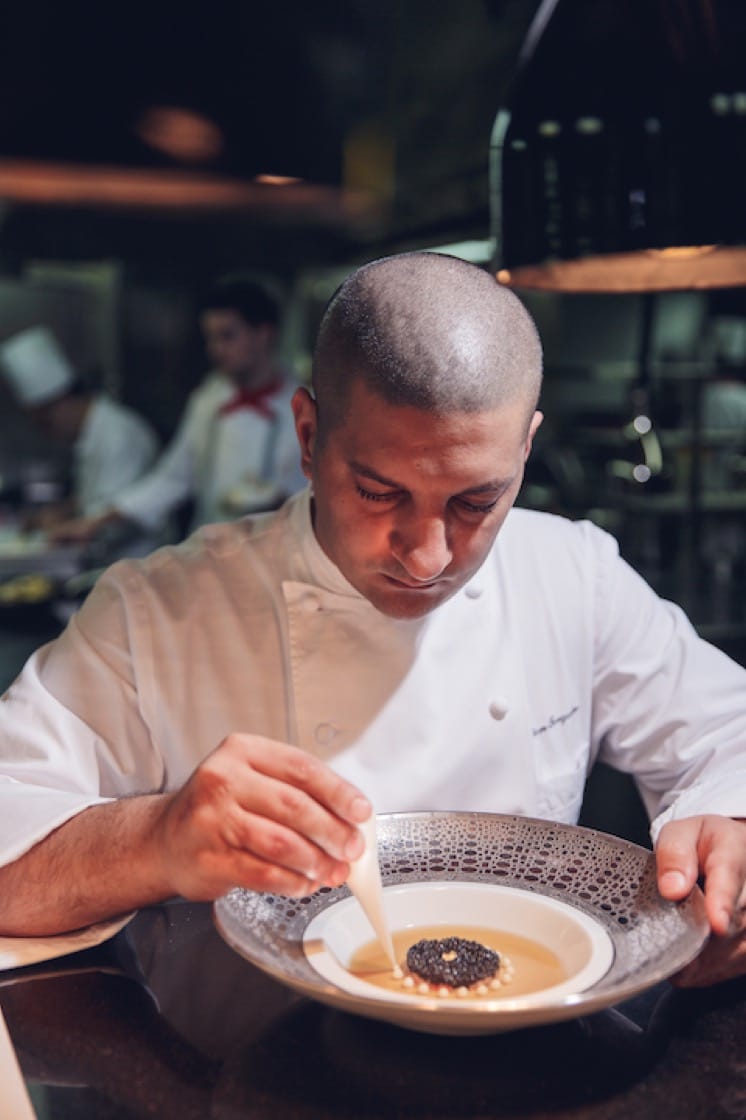 For Tongourian (right), who started out as a commis cook in Robuchon’s Laurent restaurant in Paris in 2000, his fondest memory of Robuchon was working with the maestro for the opening of the first L’Atelier de Joël Robuchon in Paris in 2003.

He recalls: “He changed the codes of the kitchen — we worked in an open kitchen in front of the customers, our contact with diners evolved as we had to pay more attention than in a closed kitchen.”

Tongourian thinks that L’Atelier’s concept revolutionised the dining industry as it sparked a wave of casual restaurant globally. He says: “Robuchon was a visionary and precursor with the Atelier concept as he opened the eyes of customers to cooking and democratised haute

cuisine. He also made the profession of cooks shine.” Tongourian, who often turned to Robuchon for advice during his 20 years with the group, adds that the most important lesson he picked up was using time-honoured culinary techniques to create modern dishes.

On keeping the legacy of his mentor alive, Tongourian says: “I hope to transmit his know-how to as many chefs as possible” 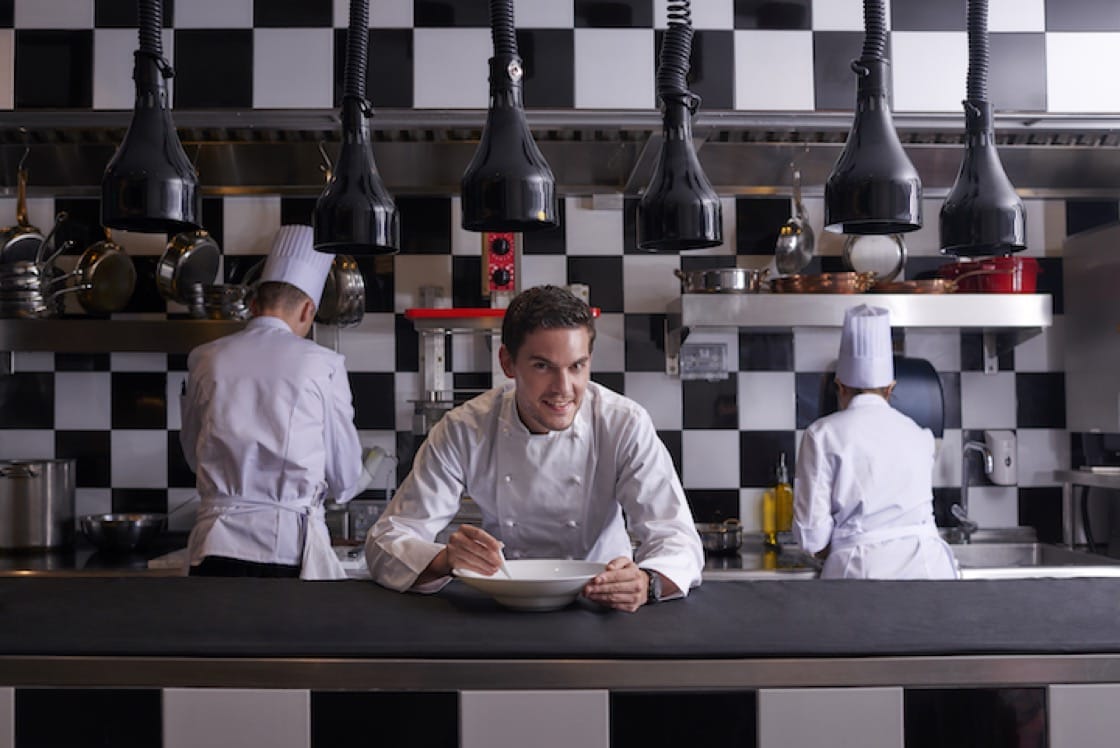 In Singapore, one of Robuchon’s youngest proteges, Vianney Massot, is carving a name for himself, heading his one-starred restaurant, Bacchanalia, which opened in September. (The restaurant was renamed to Vianney Massot Restaurant in March 2019). The 27-year-old was the executive chef of the now-defunct L’Atelier de Joël Robuchon in Singapore.

Massot says that his contemporary French restaurant is an homage to his mentor, whom he first met when he joined the Joël Robuchon group on his 18th birthday.

The French maestro’s influence in Bacchanalia is obvious. Its entire open-concept kitchen is clad in black and white tiles. The same monochromatic decor can also be found in some Joël Robuchon restaurants around the world. Dishes such as the foie gras symphony amuse bouche is a riff on Robuchon’s famed starter that uses crab meat and jelly with a caviar core of caviar. 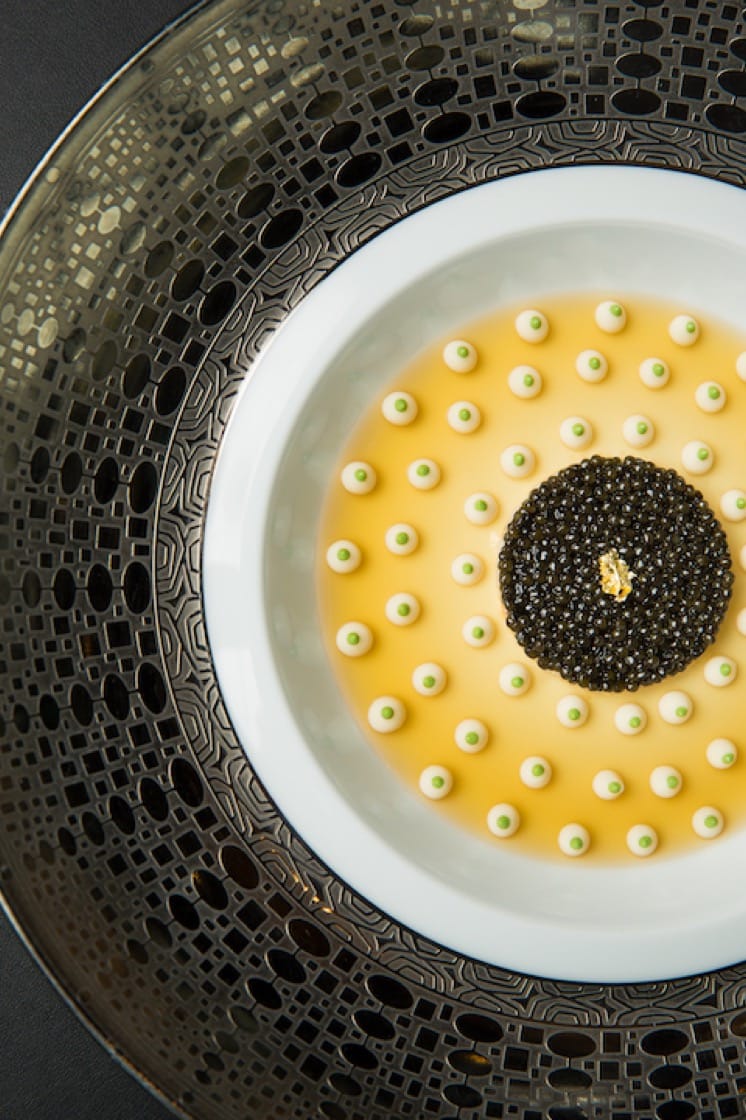 Massot attributes his knack for precision in his cooking from his salad days at the cold starters section in the Joël Robuchon Group.

He recalls: “It is one of the most difficult sections to start out in the kitchen as the preparation recipes are so long and you need good organisation skills. A lot of skills and techniques has gone into Robuchon’s dishes but most diners would not realise this. This is something that I try to put into my cooking today.”

For Massot, a dish that is most representative of Robuchon’s style is his sublime starter of caviar jelly with cauliflower cream (left). “The process to prepare dish is very time-consuming and requires many skills and techniques,” he says. “Merely following the recipe might not

give you the same end product.” One of the most valuable trait that Massot gleaned from his years with Robuchon is his streak of perseverance. The late chef had persisted with his rigorous routine of travelling to his restaurants around the world despite ill health.

On paying homage to Robuchon through Bacchanalia, Massot says: “If I haven’t met Robuchon in my career, I would not have been able to open my restaurant at such a young age. It is my way of saying ‘thank you’ to him.” 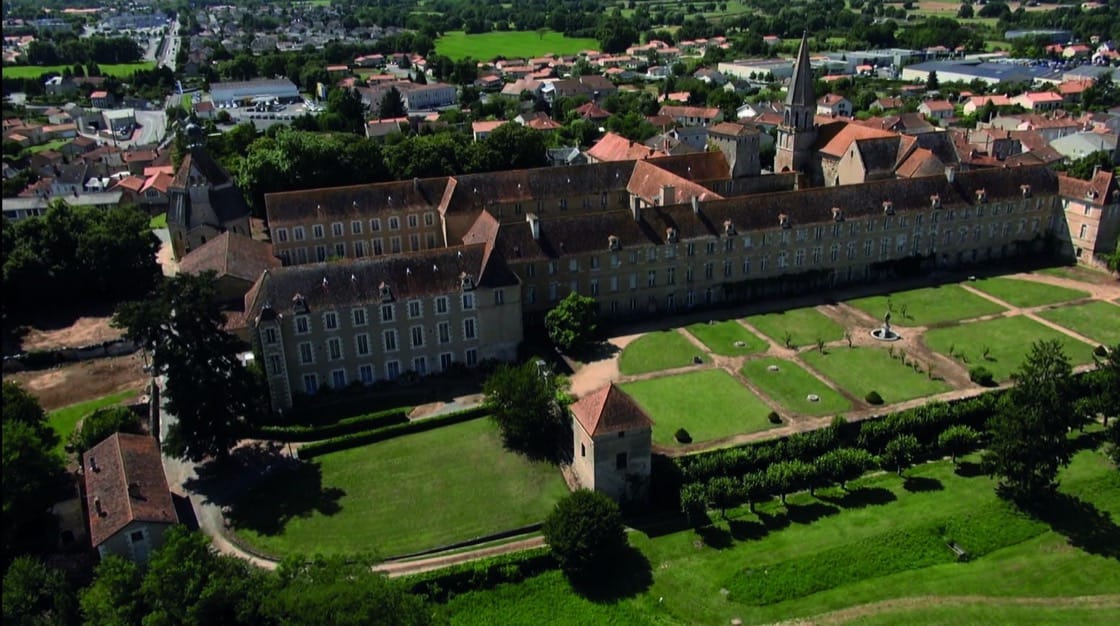 The immense influence of Robuchon extends outside the kitchen. The late chef had a passion project to pass on his wealth of culinary know-how and nurture future generations of chefs.

The Joël Robuchon International Institute is slated to open later this year in Montmorillon in the same Western region of France where the Poitiers-born chef spent his childhood years. The culinary school is a joint partnership with the acclaimed Ecole Hôtelière de Lausanne. Housed in a historic 11th century monastery-hospital, the school will offer three or four-year courses on gastronomy, luxury restaurant training and on showcasing French gastronomy and produce.