The young French executive chef is taking the one-Michelin-starred restaurant along the chic classic French route.

There is the slow-cooked Bresse chicken drenched in an rich ivory sauce enriched with foie gras and butter, which is a throwback to the old-school dish of chicken en vassie, and the cep tartlette (below, left), which has petals of porcini arranged inwards to form an intricate rose that is topped with a spicy eggplant caviar.

Like in traditional French restaurants, his kitchen staff also don tall chef’s hats as he believes that this will instil a sense of pride in their work.

However, Massot also runs his 24-seat restaurant with a palpable air of modernity, from his breezy banter with diners to the smaller sleek gueridon trolley that promises tableside service. 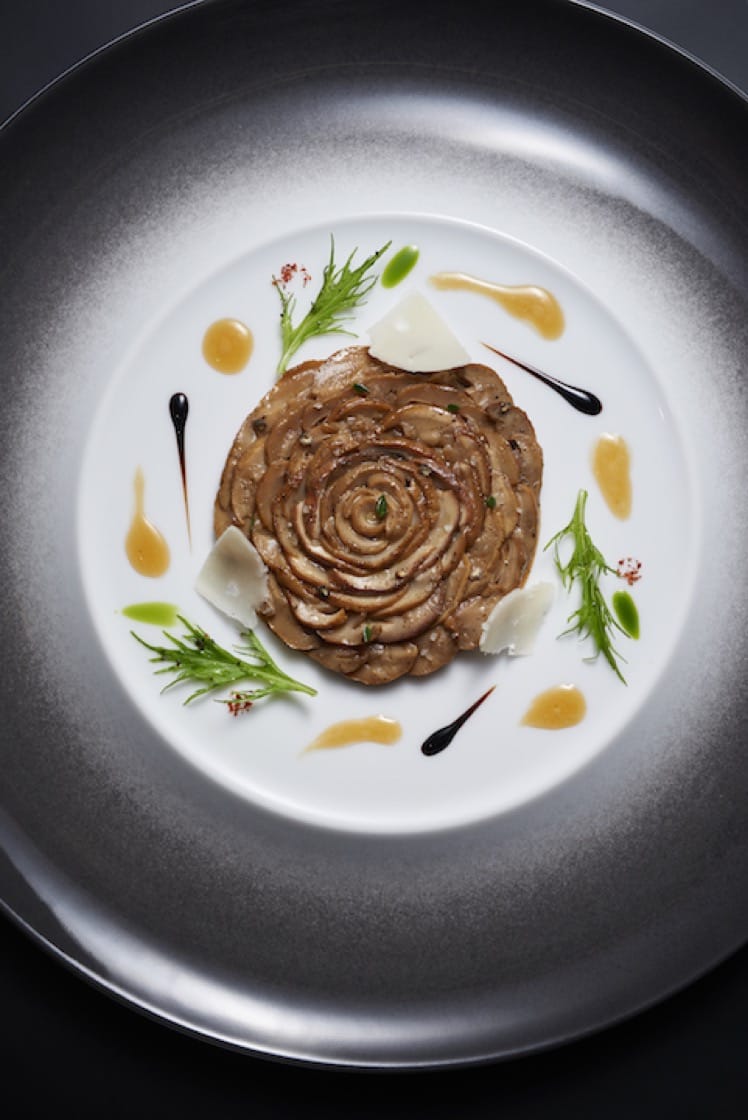 The Paris-born chef is helming the third reincarnation of Bacchanalia, which was led by Australian chef Luke Armstrong for close to two years. He left in August to pursue a job opportunity in Japan.

Prior to Armstrong’s stint, the restaurant was headed by chef Ivan Brehm, who has since set up Nouri, which received a Michelin star this year.

Today, Massot has taken Bacchanalia on a more clear-cut classic French route. This doesn’t come as a surprise as Massot was the executive chef of the now-defunct two-Michelin-starred L'Atelier de Joel Robuchon Singapore and a long-time protege of the late legendary French chef, Joel Robuchon.

An homage to Robuchon

In fact, Robuchon’s influence is immediately apparent the moment diners step into Bacchanalia by Vianney Massot and see its entire open-concept kitchen clad in black and white tiles. The same monochromatic decor can also be found in some Joel Robuchon restaurants around the world.

Speaking to the MICHELIN Guide Digital, Massot says: “This black and white decor makes me feel comfortable and happy to spend more time cooking in the kitchen. Besides, it adds atmosphere to the restaurant.” 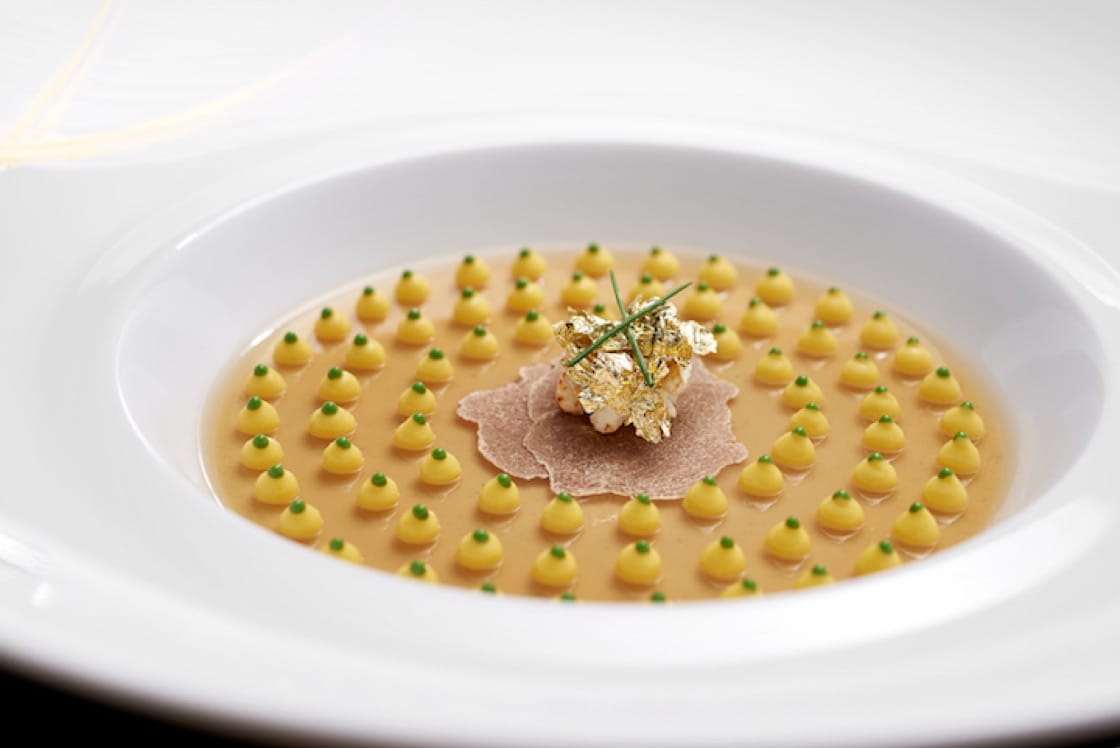 Foie Gras Symphony has dots of corn puree on a delicate foie gras and duck consomme jelly. (Credit: Bacchanalia By Vianney Massot)
Decor aside, some dishes resemble Robuchon’s style. Most striking is the foie gras symphony amuse bouche, which has evenly spaced and geometric dots of corn puree topped with parsley drops on a delicate layer of duck consomme jelly beneath a bed of foie gras. The dish is a riff on Robuchon’s rendition, which uses crab meat and jelly with an indulgent core of caviar.

Massot wants to pay homage to his mentor’s much-revered precision. “Robuchon is my maestro and he has taught me a lot,” he reflects. “I am sure that he will be happy and envious of my version of his dish.” He is working on incorporating foie gras and black truffle jelly in another version of the dot-filled amuse bouche.

He says: “All these skills have become a part of me. After all, I’ve spent nine years with Joel Robuchon and I don’t want to throw away what I have learnt.”

Vianney Massot's kitchen team don chef hats as he believes that it will drive a sense of professionalism in the kitchen. (Credit: Bacchanalia By Vianney Massot)
“Fine-dining in Singapore has the potential to take off”

Massot received the opportunity to helm Bacchanalia around the same time when Robuchon’s restaurants were shuttering here. On choosing to remain in Singapore, he says: “With the closure of Robuchon’s restaurants here, the French fine-dining scene has become less competitive as compared to Hong Kong, where there are still three-starred French restaurants. Singapore is known for its hawker food, but fine-dining also has the potential to take off here.”

He adds that he is also looking forward to the influx of big-name restaurants by chefs such as Anne-Sophie Pic next year. “I want more competition so that more big names will come.”

While stepping out of the shadows of Robuchon may be an uphill task, Massot is striving to stamp his identity on his restaurant. Having worked in Macau and Singapore for three years, he is familiar with Asian ingredients and has developed a taste for spicy food.

Naturally, this translates into his cooking which incorporates regional ingredients that caters to local tastebuds. For example, the scallop ravioli is drenched in a citrusy kumquat emulsion. He says: “I like to give a little bit of acidity with the scallop but it should not be as sour as lemon.”

Another Asian ingredient that gets him excited is coarsely ground Sarawak black pepper that is slathered around the block of ohmi beef before the meat is pan-fried. He shares: “The black pepper adds a nice bite to the meat. Adding a dash of pepper just before the meat is served is an important finishing touch, as it gives an explosion of flavours and brings out the freshness of the meat the moment that you eat it.” 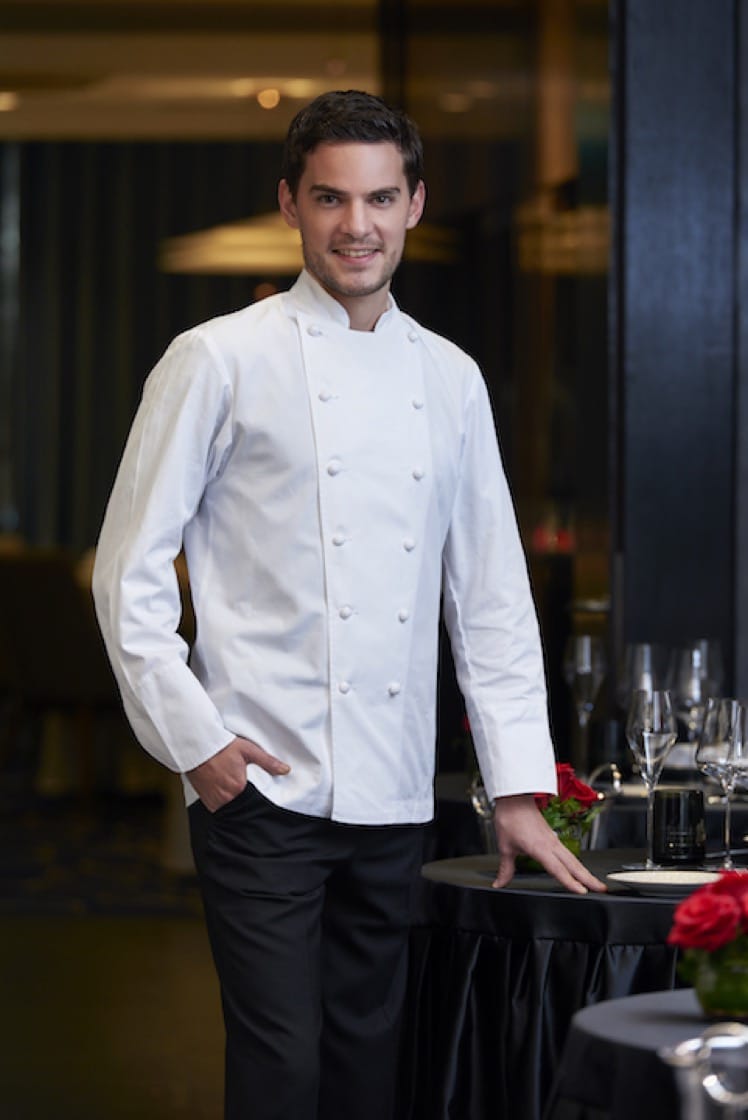 A deeply-rooted passion for restaurants

Being in the hospitality industry runs deep in Massot’s family — both his father and grandfather worked in the hotel restoration industry. “I like jobs that requires hands-on action and precision,” he says: “If I wasn’t a chef, I would do something related to interior design.”

Having an interest in cooking from young, he attended hospitality school to study for a culinary diploma.

At 16, he started his internship at three-Michelin-starred Epicure in Le Bristol Paris by Eric Frechon. Relishing the hands-on kitchen experience, he cut short his studies by two years and dove headlong into the restaurant

world. On his 18th birthday, he joined the Joel Robuchon group. He cooked his way around the group’s restaurants in France before joining the coveted research and development team that created new dishes around the world. As part of the group’s experimental kitchen, he opened five restaurants with Robuchon.

At 27, Massot is one of the youngest executive chefs in Singapore. What’s the secret to his success? He says: “Treat every day as a new day. Don’t be afraid of starting from scratch and having the perseverance and passion to do so.”