At two-MICHELIN-starred French restaurant Écriture in Hong Kong, the sound that executive chef Maxime Gilbert dreads hearing the most in the kitchen is a crash, because that means another dish has been broken.

“I’ve brought every plate from Japan here with me, which is probably why I’m so attached to them. Each time one breaks, my heart aches because every plate is the result of an artisan’s hard work. I’ve always found it a waste to simply throw them away, so I end up putting the pieces away and saving them, even though I didn't know what I could do with them," says Gilbert.

This was until one day, when he brought up the pile of broken plates he had been saving while talking to Matt Abergel, the owner of Yardbird, a Japanese izakaya in Sheung Wan, Hong Kong. Abergel suggested that he use kintsugi to fix them, which got him thinking: Why hadn’t he thought of that before?

JUST IN: The 2020 edition of the MICHELIN Guide Guangzhou 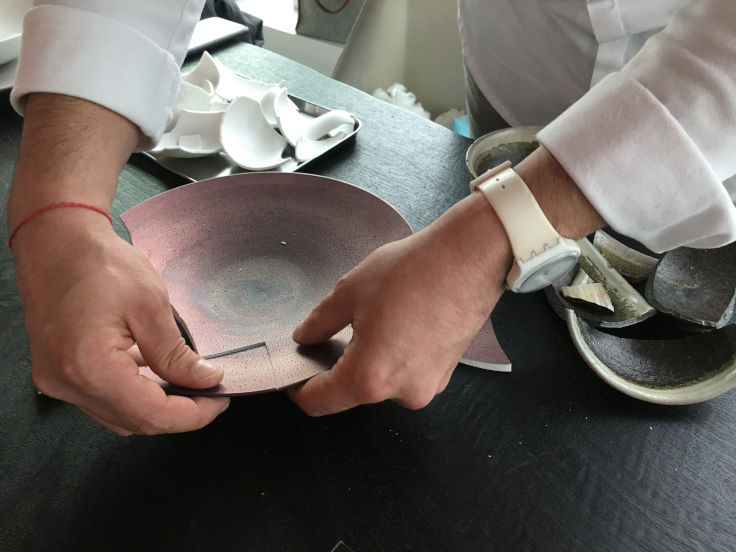 Executive chef Maxime Gilbert of Écriture saves the broken parts of his plates and restores them at regular intervals through kintsugi.
Advertisement
Advertisement

Getting to know kintsugi

Kintsugi, also known as kintsukuroi, is a mending technique from Japan. The best-known story about the origins of this technique dates back to the 15th century, when a shogun named Ashikaga Yoshimasa broke a tea bowl he loved and sent it back to China, where it was produced, to be repaired. However, he wasn’t pleased when the bowl was returned to him fastened with metal wires. Not only did it look unwieldy, some sources said it leaked as well. Ashikaga then sought the help of Japanese craftsmen to fix it, and they did not disappoint. They devised a way to glue the pieces carefully together with lacquer, with a of sprinkle gold powder on top, which transformed the cracks into beautiful golden threads. And this was how the art of kintsugi was born.

Gilbert says he was aware of kintsugi for a long time – even the streaks on the walls of the restaurant were inspired by it. Following Abergel’s suggestion, he bought some paint and copper powder, and taught himself how to do it from the internet. He describes the technique as one that’s easy to pick up, but difficult to master. Taking the first plate he’d repaired with kintsugi as an example, he points out how the copper streaks were too thick and inelegant, and compares it with another plate he’d fixed recently (see banner image) to demonstrate how he now has a much better handle on his strength, which has allowed him to produce more elegant streaks.

“During the repair process, the plate receives its first coat of paint and is then left to dry for a week before being painted over with another coat, and so on, until it is stable. Meanwhile, we use sandpaper to smooth its joints and then finally apply bronze powder to the lacquer and give it a final coat of paint. After the paint dries, the repair is complete,” Gilbert describes. Traditionally, gold is used for gilding, but other metals such as silver can also be used. In Gilbert’s case, he has deliberately picked copper to match the restaurant’s décor. 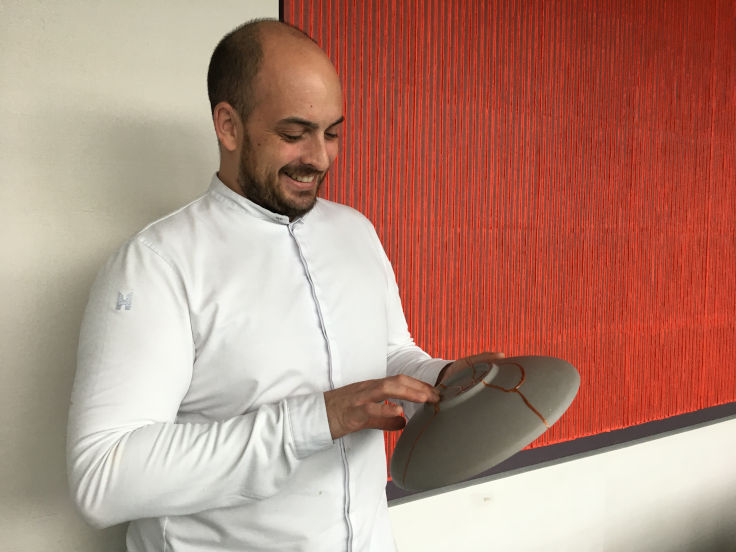 Gilbert holds the first plate he repaired with kintsugi. Although the streaks produced were not ideal according to his standards, he still enjoys their uniqueness.

Two-thirds of Écriture's plates have now been repaired with kintsugi. Some plates require only a light copper dot to smoothen a broken rim; while in others, copper streaks run across the plate to reveal how it was once broken into pieces but has now been given a second life to reappear at the table with more beauty and character.

“I really like kintsugi because it not only extends the lifespan of the plate, but also because its streaks alter the appearance of the plate, which makes me feel like I’m holding a brand new plate,” Gilbert laughs.

“I used to swear a lot whenever the plates broke. You know how some plates cost 200 euros a piece? Now, I repair every single one of them, and each time I look at one I've put back together with my own hands, I feel very proud of myself. I've reduced the amount of money I’ve spent on new plates, and more importantly, the amount of waste that we, as chefs produce, whether it's in ingredients or tableware,” he muses.

Although Gilbert is proud of his kintsugi plates, he does not deliberately select them to serve his dishes nor alter the way they’re presented to suit the kintsugi streaks. He says that some customers who are familiar with kintsugi express their appreciation for the technique, while others deliberately select plates which have been repaired with kintsugi. At this time, his sous chef is the only other co-worker who has mastered kintsugi, and he hopes that more of them pick up this skill to experience the satisfaction of repairing plates like he did. 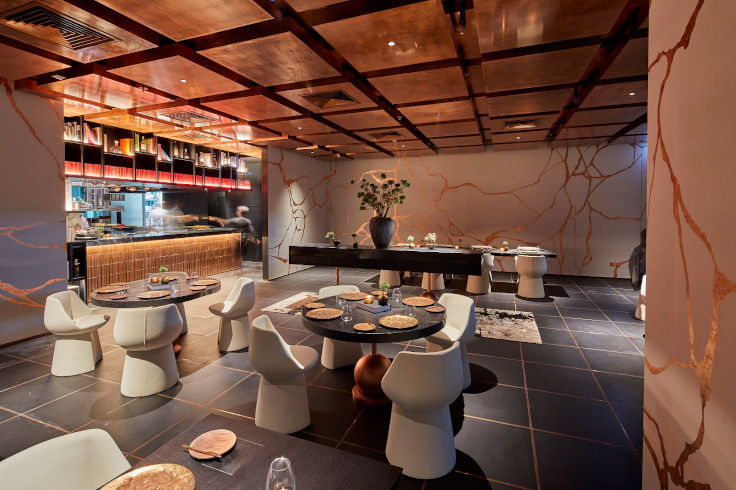 The streaks on the wall at Écriture are inspired by kintsugi and are decked in copper to create a uniform style with the copper streaks of the plates. (Photo: Écriture)

In recent years, kintsugi has caught the attention of many all over the world: the Freer Gallery of Art at the Smithsonian in Washington, U.S.A has held an exhibition on kintsugi; while British fine art practitioner Paul Scott as well as Korean interdisciplinary artist Yeesookyung have also incorporated kintsugi into their works.

The next time you see a plate with graceful golden streaks at one of these restaurants, know that it was on the verge of being abandoned but has now been reborn into a more beautiful form to become an indispensable part of the culinary experience.

This article is written by Mindy Li and translated by Tang Pin-ji. Click here to read the original story.