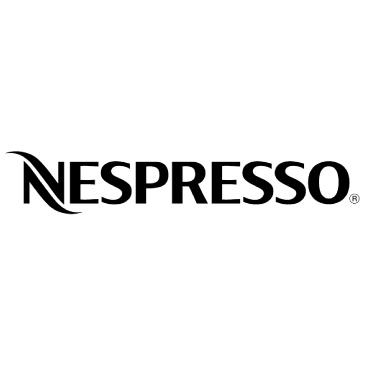 How does one incorporate sustainable practices into daily life? Just ask Andy Yang, chef-owner of Table 38, whose modern Thai fine-dining restaurant is known for its creative use of organic, sustainably sourced ingredients. He walks us through a typical day in his life in Bangkok.

The life of a chef can be relentless. Andy Yang knows this well. Despite frequently ending with late nights, the always cheery chef-owner of Table 38 says he routinely wakes up at 5am every morning.

“As soon as I wake up, I put on some music. Me and my wife would exercise and box, then we’ll have a great cup of coffee,” says Yang. “It’s not just the flavour itself — the smell, the aroma. I have it in all variations: Longo, espresso and sometimes ice coffee,” he adds.

“Coffee is really important to me. It helps me function at my best consistently. So one thing I don’t compromise is the quality of the coffee I drink.”

No matter how hectic his schedule gets, Yang always finds time for exercise, says the avid cyclist. After having breakfast with his wife, Yang starts his day with a visit to both restaurants he runs across the city, his fine-dining flagship, one-MICHELIN-starred Table 38, and Bib Gourmand-rated eatery Eat Pad Thai.

Cycling to each of them is the best way to beat the Bangkok traffic, while clocking in a bit of exercise. “In Bangkok we have one of the best cycling routes in the world — it’s about 25 km long. When you exercise and bike that long, I find it opens your mind and gives you new ideas,” Yang explains. 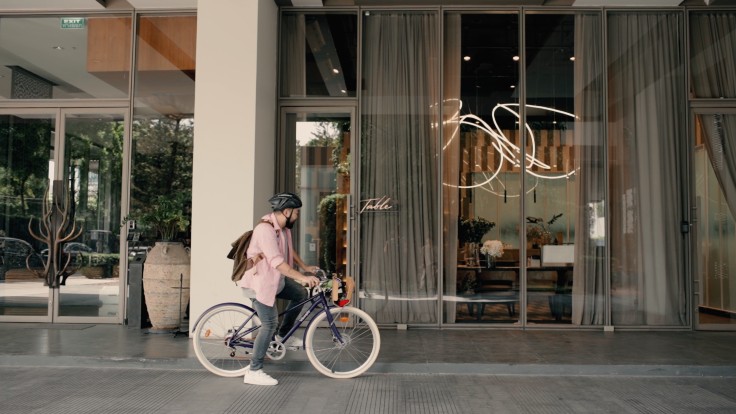 After checking on his other restaurant, Yang arrives at Table 38, and inspects his ingredients for the day.

For his special collaboration with Nespresso, he’s creating a coffee-marinated Peking duck-style duck curry served with Nespresso-infused tomatoes and iced coffee. “Everything about this dish is sustainable,” he explains. 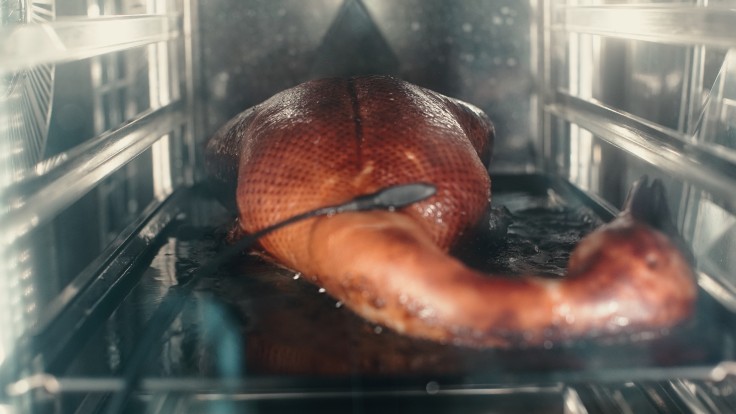 To eliminate wastage, Yang is using a whole duck from Sirinfarm, a family-run farm in Chiang Rai that Yang has personally visited and whose ethically farming practices he approves of.

At the farm, the animals are allowed to roam freely and are not fed with any antibiotics or hormones. The animal waste is used to fertilise an adjoining rice field on the farm, while the excess rice harvest is used to feed the farm’s chicken, ducks or pigs, Yang explains.

As for the honey used to marinate the duck, Yang uses wild honey from Hin Lad Nai, a community that lives in the rainforest in Chiang Rai, which is one of the most sustainable and healthy forests in Thailand. The honey tastes different every year. “That’s the charming thing about using 100% sustainable ingredients, because if you respect the earth, respect nature, they will give us back,” he enthuses.

During a quick coffee break before evening dinner service begins, Yang has a quick moment for reflection on his culinary career so far. He had not always been such a passionate advocate for sustainability, but a family health crisis changed his perspective and set him down this path, he shares. 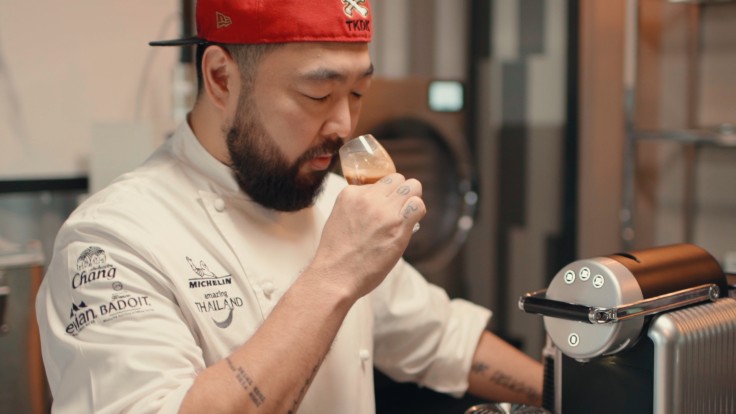 In 2010, around the time that his first restaurant Rhong Tiam in New York won a MICHELIN Star, he found out that his mother had cancer.

“She had to eat healthy and uncontaminated food. I’m a chef, not a doctor, so from that time I start to study what it means to be sustainable and study deeply on ingredients in its most natural and purest form,” he explains.

He further muses: “If you don’t pay attention to this, at the end of the day, all the resources will be gone, nothing can sustain itself.”

The Table 38 team starts firing up the stoves in preparation for dinner and the evening’s first guests.

For his special creation, Yang first expresses the coffee from the Nespresso machine and pours one portion into a Roto-evaporator to extract the coffee essence. He has chosen Nespresso Ristretto Intenso coffee for its exceptionally intense and syrupy flavor. 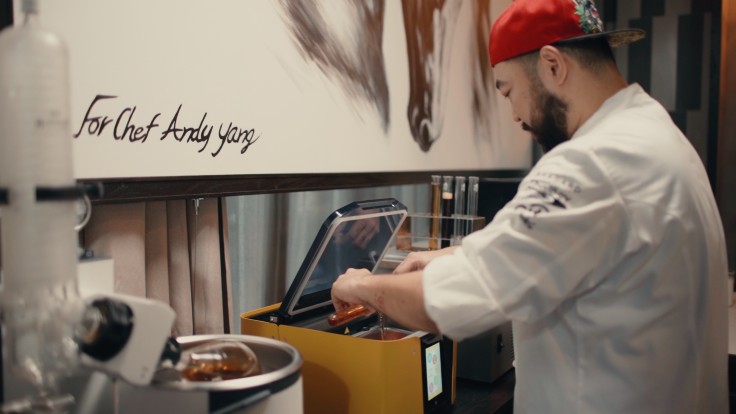 He uses the coffee extract to marinate the duck before roasting it, Peking duck-style, in his oven to get a thinner and crispier skin.

He puts the remaining coffee extract in an ultrasonic homogenizer and infuses it with a coconut cream using high-frequency sound waves to produce an iced coffee. “The coconut cream itself will help bring out the round and balanced flavor of a Nespresso forte so you can have the perfect iced coffee with savoury dish,” the chef explains.

For petit fours, Yang infuses tomatoes with cherries and coffee, and serves it with Nespresso coffee-enriched dark chocolate.

Yang and his team wrap up after a busy service. They place the used Nespresso coffee capsules into a recycling bag, which will be collected from the restaurant by a Nespresso staff.

The used capsules will be sent to a recycling center in Pitsanulok, in the northern part of Thailand, where the ground coffee will be sorted and used as farm fertilizer, while the aluminum is recycled and turned into everyday items, such as pens, chopsticks, scissors and even a sleek Velosophy bicycle. 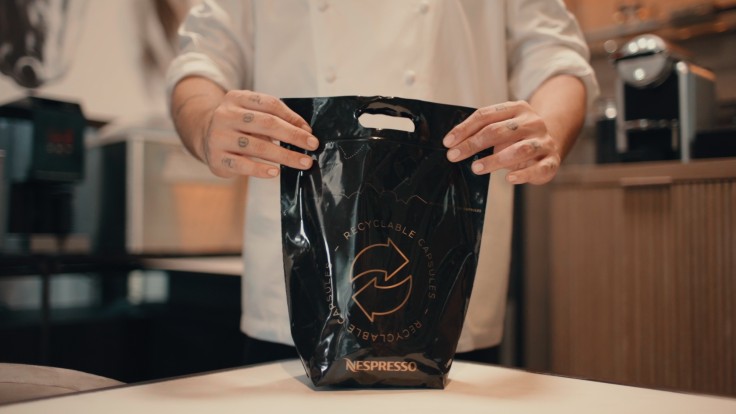 For Yang, this extra effort by Nespresso is an important feature — and key to what he looks for in partners and brands he works with.

“Sustainability means you don’t take away from the natural habitat. In the other way, you create the ecosystem that it can sustain itself,” he says.

He further muses: “Like fashion and arts, it’s time to go back to the classics — to the basics.”

“My plan is to make healthy, organic and clean food where everyone is able to access it, it doesn’t have to be expensive,” he says.

“When everyone demands sustainability, the price will be cheaper and it will be accessible to everyone.