Along with discovering which restaurants received stars at the MICHELIN Guide Thailand 2022 Star Revelations, everyone eagerly awaited the announcement of the MICHELIN Guide Young Chef Award Presented by Blancpain. Sponsored by the historic watch brand, this award is a dream come true for young chefs. It recognises up-and-coming talent at MICHELIN-Starred restaurants who demonstrate exceptional culinary skills as well as passion and creativity in the kitchen.

This year’s winner was revealed to be Chef Garima Arora of Gaa (one MICHELIN Star). Even through closing down and then relocating the restaurant, she still was able to maintain her unwavering integrity and skill and shine once again.

Upon receiving the award, Chef Arora spoke about how, in addition to the team at Gaa, who stood by her side in good times and bad over the past two years, she was grateful for her father’s support.

“My dad has been most influential in my career as a chef. He was the first to teach me how to cook, instilling a love for cooking since I was a child. He also supported my decision to become a chef and helped me understand business. With him, I was able to be strong and face the difficulties over the last two years as I had to think clearly and make decisions that affected not just my life, but the 40 other lives of my team. Yes, my father is the most influential in my life as a person and a chef.”

“I think being a conscientious person is very important. Surrounding yourself with the right people to build an environment where work thrives and creativity thrives is extremely essential.” 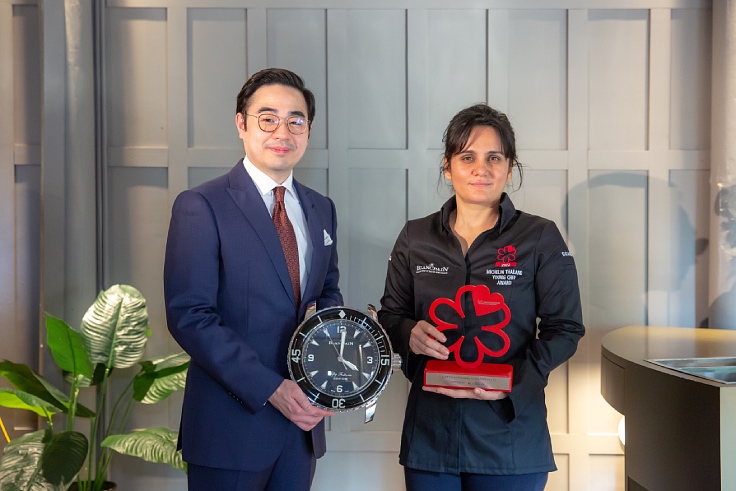 Chef Arora recalled her childhood, when her father travelled the world, coming home with new cookbooks and recipes to try out on the family. “One time he made an upside down cake, which usually calls for apples. But he made it with bananas. When he turned over the cake, I was so surprised to see bananas inside the cake. I asked him how he did that, and he said it was magic. That’s my first memory in the kitchen and my memory of cooking with him.”

Unlike other chefs who knew they wanted this career from the start, Chef Arora actually studied and pursued journalism. After working as a journalist for a while, she realised she did not have the capacity or passion for it. Ultimately, she decided to shift her focus to cooking, so she went to tell her dad that she wanted to become a chef.

“When I told my dad that I was leaving everything behind and starting over as a cook, he was happy for me and encouraged me. I think he didn’t think I would take it seriously but at least he would get some good food out of it! Still, he was happy and basically told me I could go anywhere in the world to study.”

As her father supported her in choosing to change her life at 21, she made a dramatic turn and travelled to France to study at the famous culinary school, Le Cordon Bleu in Paris. After her studies, she polished her skills under renowned chefs and at MICHELIN-Starred restaurants, taking advantage of opportunities to work with Gordon Ramsay at Verre in Dubai and with René Redzepi at Noma in Copenhagen, which recently received three MICHELIN Stars. Chef Arora admitted these experiences profoundly influenced her, helping her develop greatly as a chef so that she could strike out on her own, moving to Bangkok and opening Gaa to build her own accomplished reputation. 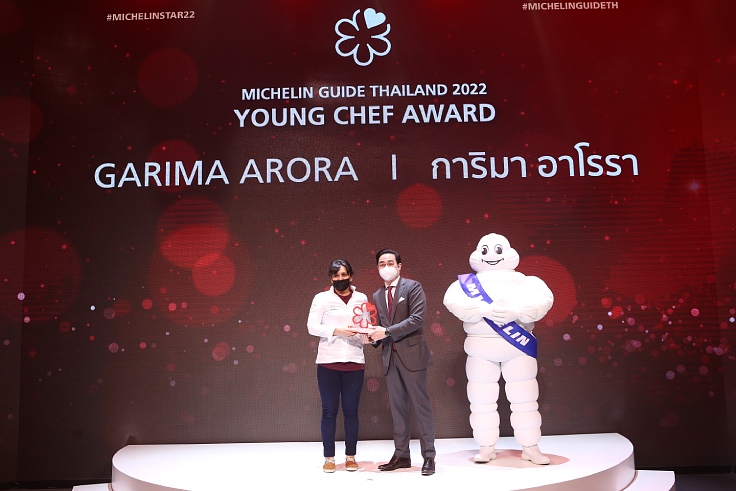 On the day of her success, we asked Chef Arora how she got to where she is now.
“Some people think that being a chef is a male-dominated career, but I don’t think much about it. What I believe is in hard work. Keep your head down and work hard. No matter which gender, which country, which race you are, you will succeed if you do your job. I think that is all that matters. And that's what I tell everybody. Just work hard. It will repay you. Yes, it will pay you back. Always. Everybody has challenges in life. There is no running away. Nobody is born without challenges, with everything given to them. You have to work hard. That's what I believe in.

“Also, I honestly think being a conscientious person is very important. Surrounding yourself with the right people to build an environment where work thrives and creativity thrives is extremely essential. When you create an environment like that for yourself and the people around you, it goes a long way. Being disciplined is also vital. I think it all comes back to being thoughtful in your work and your everyday life. That’s very important. Over these last few years, if there is something that we’ve understood through the pandemic, it’s that building confidence is very important, not just for ourselves, but for the people around us, to be able to get through bad times. Giving people the opportunity to succeed, giving them the tools to fight through hard times is very, very important. So being conscientious is good.”

“Stand by what you believe in. Cook with honesty, with honest people. Build an environment around yourself that you are happy to be part of, and everything else will follow. But first, you have to be true to your profession and to yourself.”

We asked Chef Arora what winning the MICHELIN Guide Young Chef Award means to her.
“I'll be honest, I stopped thinking of myself as ‘young’ a while back, but I think it was a very good reminder that I have so much more to do. I have so much more to achieve, so much more to show for, and so much more to build. This industry can be really tough on you. The last few years have left a lot of us jaded; you feel in so many ways defeated. I think it’s not just me. I think a lot of restaurant owners have been like that. Some have had to close down. So you can very easily think that this is the end. You've given so much of your energy in the last two years, and you get so little in return. You can get tired and worn down. But you have to remember you're still young and have so much more to give. So I’m grateful we were in a position to reopen. It made me and my team feel useful again. We're not done. We're not over, we're just beginning. Guests are coming back again and enjoying our food. And I think the award was a great positive reinforcement for us. And we're very glad that happened.

“My advice would be to do what you believe is right. Stand by what you believe in. Cook with honesty, with honest people. Build an environment around yourself that you are happy to be part of, and everything else will follow. But first, you have to be true to your profession and to yourself.” 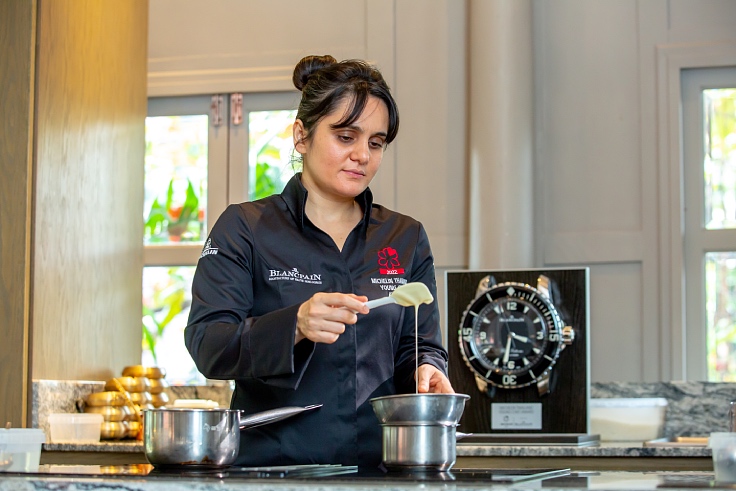 The MICHELIN Guide Young Chef Award is sponsored by Blancpain, the world’s oldest Swiss luxury watch brand that has been nurturing relationships with haute cuisine as well as award-winning chefs for over 30 years.

When it comes to crafting watches, continuous innovation has always been the brand’s core value. The brand’s quality derives from precision, passion, authenticity, and creativity. These are common traits shared between watchmakers and chefs – the extraordinary ability to innovate and the relentless challenging of their boundaries. They need these qualities to create masterpieces, while remembering that innovation is the key to success.

Blancpain is not only an official timekeeper of renowned culinary competitions, but it is also surrounded by close friends – old and new, including chefs from hundreds of MICHELIN Starred restaurants. When a watchmaker meets the gastronomic world, an art of living emerges.

The global partnership between Blancpain and MICHELIN Guide is a pursuit of excellence, passion, and dexterity. The same concept applies to the MICHELIN Guide Young Chef Award Presented by Blancpain. The committee seeks out the most outstanding chef from various countries. In order to be eligible, chefs must be under 36 years old and be brimming with talent and creativity that enable them to create memorable dining experiences.

From a watch brand filled with legacies, the MICHELIN Guide Young Chef Award Presented by Blancpain recognises daring young chefs whose creativity brings about changes to haute cuisine. This is not a “simple” award the brand hands to young people. It is a prestigious award that helps promote Thailand’s culinary prowess and progress, as well as encourages young chefs to push their creative limits, locally and internationally. 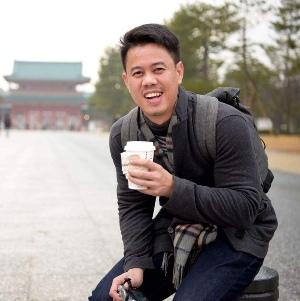 Another Frenchman snags the MICHELIN Guide Service Award in its second year running. For Thibaud Charlemarty, service is all about human connections.