The Produce of Phuket

Foraging and sourcing locally through the eyes of Chef Jim Ophorst.

Being a resort island, Phuket’s international restaurants and hotels have traditionally accommodated to ‘resort town’ tastes like lobster flown in from Maine accompanied by a selection of European wines. Recently a movement of like-minded people have set in motion the process of change in how the local hospitality industry value food, leading to more ecological meals that benefit an entire network of small scale producers in the region. 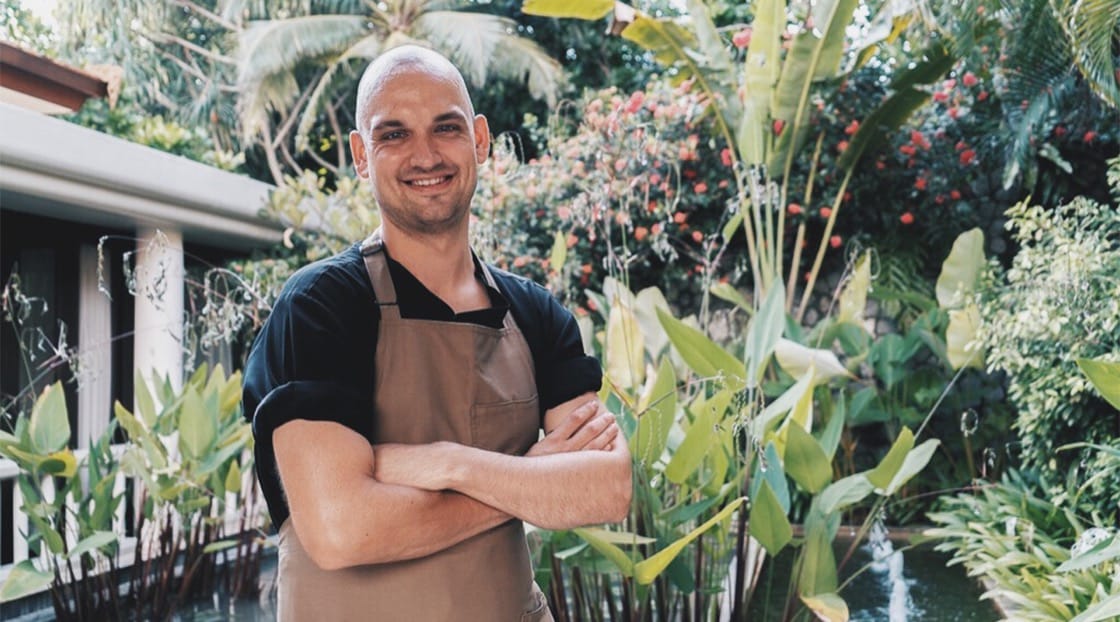 Chef Jim Ophorst of PRU restaurant in Trisara is a leading voice of change in Phuket. After training in Gaggan’s kitchen in Bangkok, Chef Jim decided to move away from modern cooking techniques and focus on what was closest to him - a creation of a 100-percent locally sourced menu. The Dutch chef and his team then spent nearly 10-months educating themselves on rare produce from the lush jungles, coasts and oceans of Phuket.

“When we started, maybe we were a bit stupid,” Chef Jim admits with a humble chuckle. “We wanted to grow all of the things we had in Europe. It didn’t work in the tropical climate.” 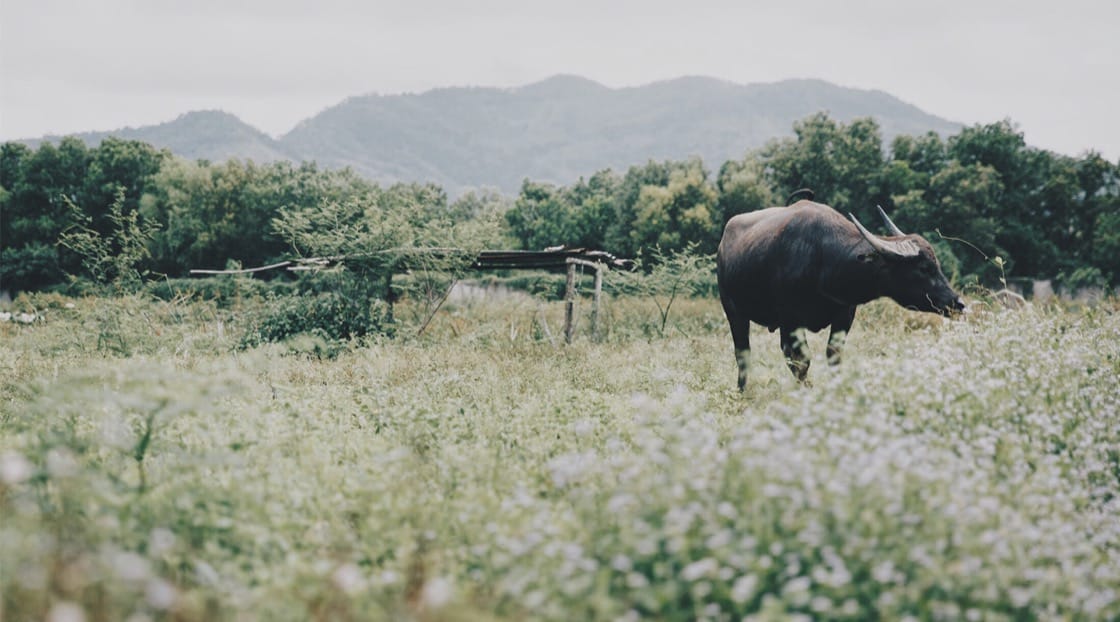 In his arsenal was a stretch of resort owned land which would become Pru Jumpa Farm, where Chef Jim began sowing seeds. The farm today produces cucumbers, carrots, tomatoes, limes and herbs with plans to rotate crops in the near future. Pru Jumpa’s surrounding jungles are ripe foraging ground for ‘dok dhala’ (ginger flower), ‘taling pling’ (bilimbi), wild mushrooms and a variety of ingredients few have seen on a dining room plate. 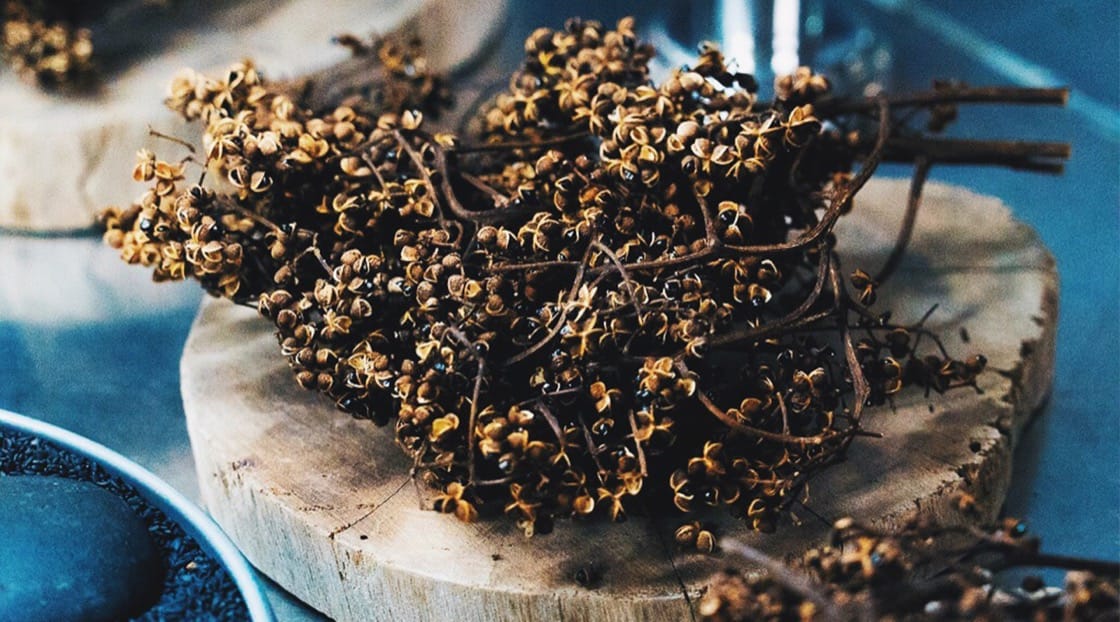 Foraged herbs are used in the dishes and as part part of the presentation. Photo credit: Angie Thien.

“I try to eat everything I find, and consider how it can be perfected,”  he says scrolling through his phone. Chef Jim pulls up photos sent by one of his suppliers, a woman who seeks uncommon ingredients in the northern provinces. “This is ‘pak kee hood’,” he says while holding the image of a pod-vegetable. Not commercially farmed, it is sometimes called Thai wasabi for its inertly peppery taste. The Chef also receives instant messages from local fishermen who send him digital photos of line-caught sea bass and cobia fish. It is a very tech-savvy way to break physical and linguistic barriers between chef and supplier.

Working closely with producers this way has led to serendipitous finds. “I already used sea grapes, but I searched everywhere for sea lettuce and one day it just came with my order of abalone from the southeast of the island.” 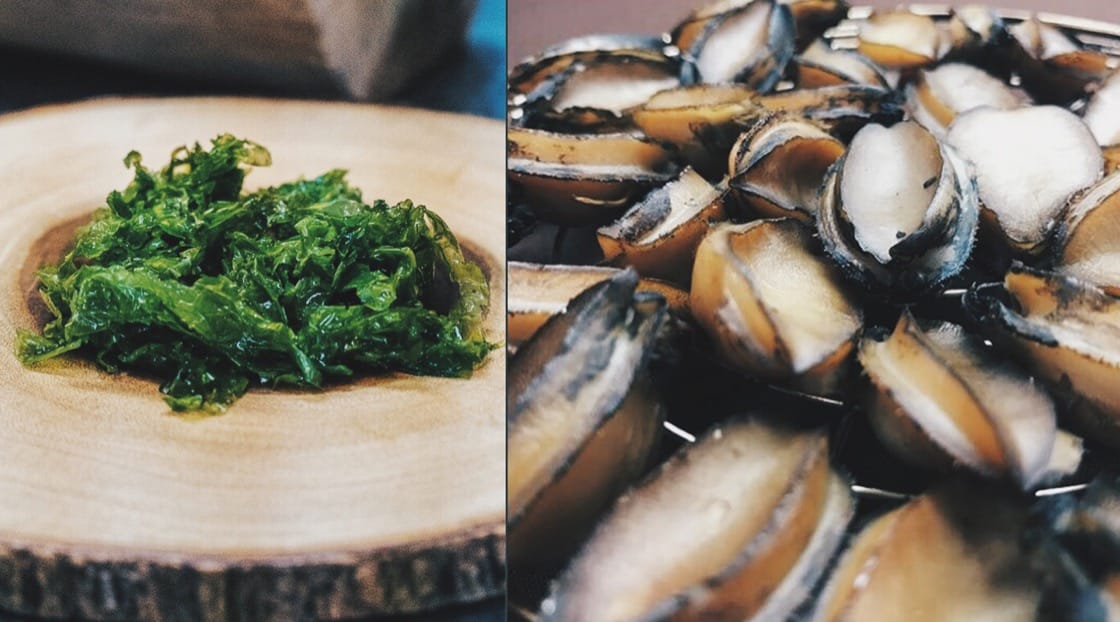 “I asked if I could eat it and they said no because it was grown in concrete basins as abalone feed. We worked with the suppliers to grow it in special basins for human consumption,” said Chef Jim. The Phuket-grown sea lettuce is notably more delicate compared to those found in the cold waters of Japan and Europe, but when dried it still packs a punch of umami.

Chef Jim is already sourcing for his next menu, a task that may take up several months, “We want to feature an XO sauce made with Surin sun-dried seafood... squids, prawns and salted fish. A lot of our fresh seafood comes from Sarasin bridge, where fishermen provide us with Phuket lobster and black crab from Phang-Nga.” 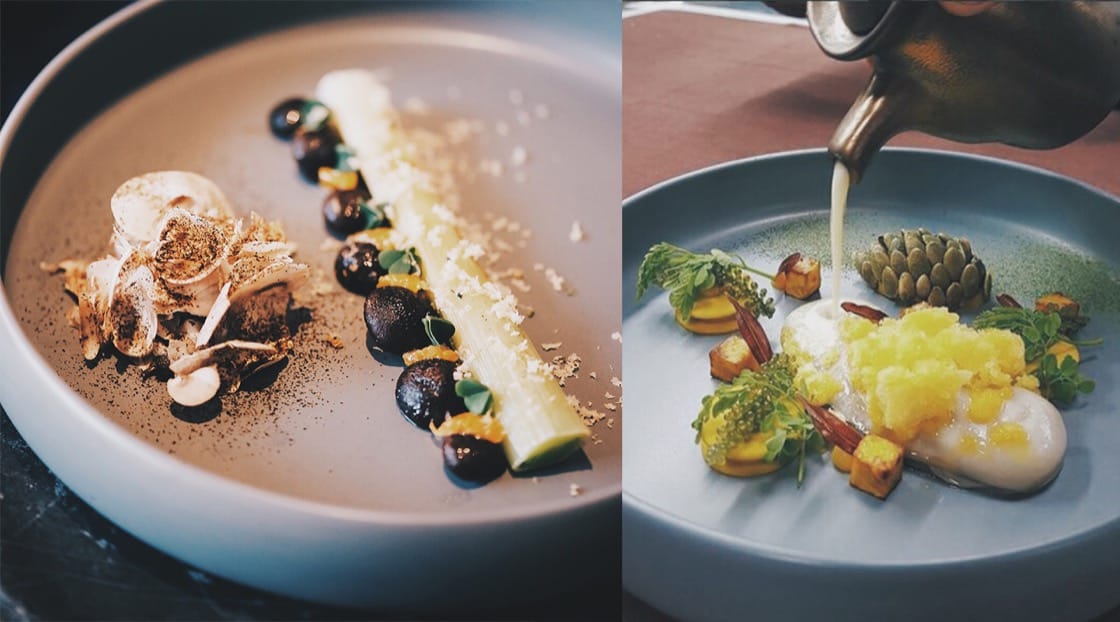 What couldn’t be grown in the farm or foraged, they source within the country from small producers. “We get organic yoghurt from a shop in Phuket that uses milk from cows in Krabi. Our ducks roam the foothills of the Phetchabun mountains. To make the most of them, we brine and braise them for five days. Before service they are roasted over a wood fire for two hours. It’s a time consuming way to cook, but it makes my heart tick a little faster when we can do things without modern gadgets.”

“Working with such unique ingredients, we want things to be natural, but that doesn’t mean simple,” Chef Jim says with conviction. “When I started three years ago, I knew nothing about Thai produce. I looked for what I could find at the wet market. Now, we’ve built networks of small producers throughout the island and across the country. Without these farmers we can’t do anything. Hopefully, for us they also get support and are able to push for more sustainable and organic produce.” 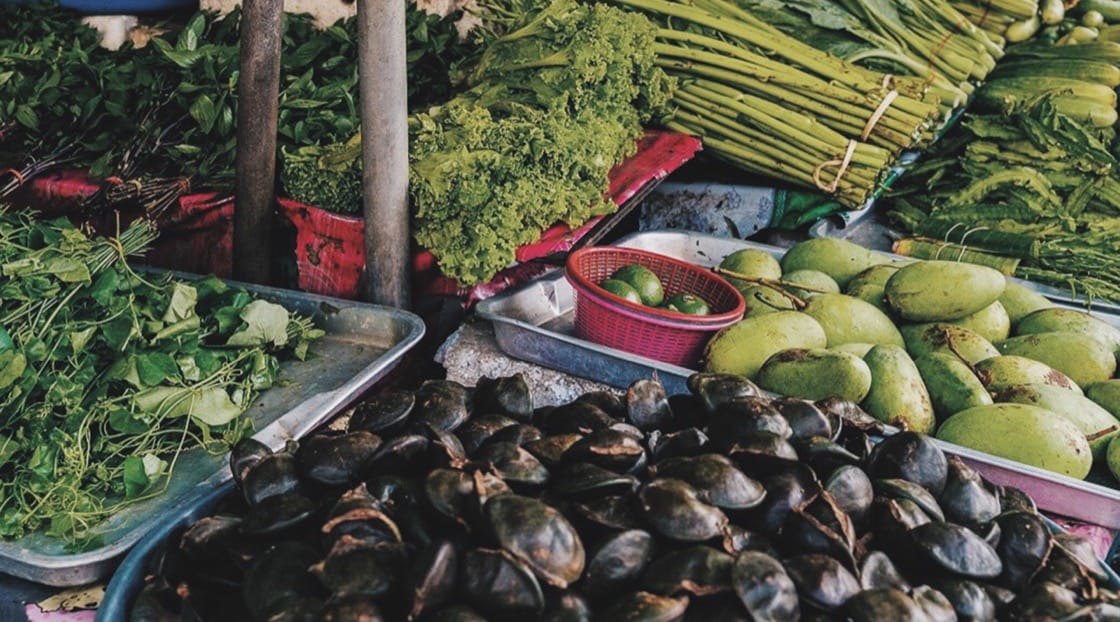 A display of local produce from a fresh market of Phuket Town. Photo credit: Angie Thien.

Markets in Phuket Town
To see a wide variety of Phuket’s fruits, vegetables and seafood, head to Downtown Market on Ranong Road. This is one of the oldest markets in Phuket, with vendors set up in an open-air space amidst colonial-style buildings. Located on the same street is Phuket Central Market, a more modern building favoured by locals for its large selection.

Pru Jumpa Farm
Growing sustainable and organic produce with crop rotation, Pru Jumpa Farm provides PRU Restaurant with much of their produce. The farm is only available for visit by invitation. For more information contact +66 (0)76 310 100, or visit (http://prurestaurant.com/our-farm/). 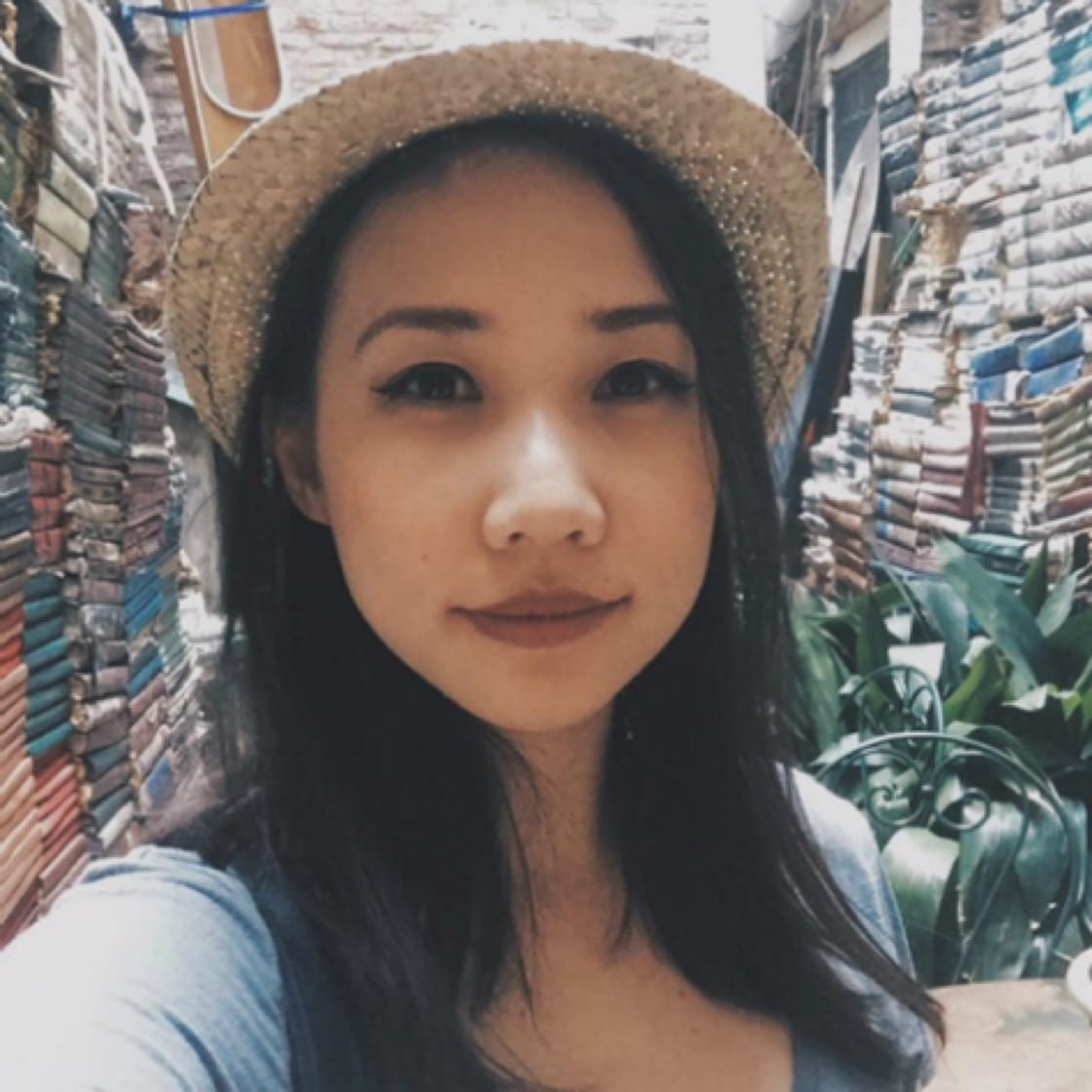 The Arts of Thai Spirit Pairing: When Simplicity Meets Authenticity

cocktail
All articles of Features