How does one create an atmosphere of French hospitality, almost 10,000 kilometres away from home?

For French chef Arnaud Dunand Sauthier, who heads two-MICHELIN-starred Le Normandie at the Mandarin Oriental Bangkok, the magic is in the details.

From the soothing jazzy notes of the piano that greet you as the elevator doors draw open to the restaurant, to the gold-trimmed curtains and carpets, the stately Jim Thompson teakwood furniture and the opulent chandeliers in the dining room, Dunand Sauthier and his team have created what has been commonly been referred to as the gold standard for fine-dining in the Thai capital.

“We try to be an embassy of French gastronomy in Bangkok,” says the chef. “For people who have travelled around France, when they come here, they can have the same feeling.”

To do this, Dunand Sauthier draws extensively from his experience growing up in the Savoie region near the French alps, and from his 15-year culinary career that spans stints under renowned French chefs such as Marc Veyrat, Guy Martin and Jacques Lameloise.

“My inspirations are multiple, it can come from my roots — a lot from my roots, actually — from my travels and from my experiences,” elaborates Dunand Sauthier, who left Europe for the first time and moved to Bangkok in 2012 to helm Le Normandie. Five years later, he led the restaurant to debut on the MICHELIN Guide Thailand with two MICHELIN stars, one of just five restaurants to hold that distinction in the guidebook today.

Le Normandie’s signature dish of Caviar, Potato and Sea Urchin, for instance, features prized pearls of Oscietra caviar and a curl of Hokkaido sea urchin that lightly balance on a foamy bed of potato espuma. Its roots are unmistakably French but with a lighter update for modern palates and Bangkok’s tropical climate.

“You have this ocean taste, a bit of the uni, paired with the saltiness of the caviar, the creaminess of the potato and, along with the champagne sauce, it makes this really French.”

Adds Dunand Sauthier: “It has all the flavours of the caviar and the juxtaposition of the different elements work together perfectly.”

To keep standards at a consistent high, Dunand Sauthier makes at least annual visits back to France, where he travels extensively to source for the best ingredients and wines. Le Normandie’s cellar holds over 500 labels, making it one of the largest selections in Bangkok 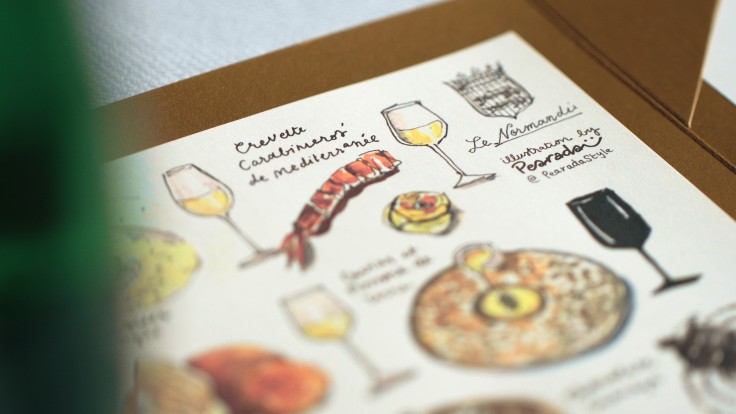 “Every product that I use from France, I know who produced them, who fished them or who butchered them,” he says. “This is very important for me, as this way, I can really have exactly the products I want here in Bangkok.” A hand-drawn menu by a local Thai artist highlights every prized ingredient and adds a quirky, personal touch.

But it is not just about the food, according to Dunand Sauthier.

He elaborates: “A restaurant is not about cuisine, it's not about service, it's the whole experience. For me, it's very important that it's 50-50.”

With the captivating views of the sunset over the Chao Phraya river as a backdrop, the restaurant’s wait staff glide elegantly through the dining room and to your tableside to put the finishing touches on dishes, be it a gentle carving of a rack of lamb or a dramatic flambé of a classic Crepe Suzette. A customised dessert trolley filled with cakes, patisseries and other enticing sweet treats completes the experience. 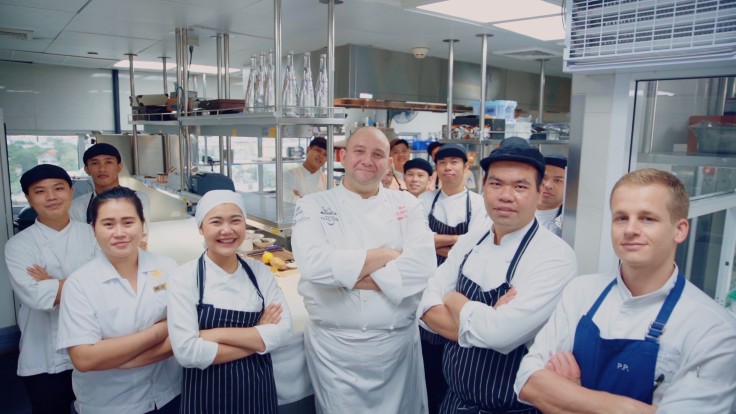 From the servers, the waiters, the runners, the chef, the pastry chef, everybody has his role and “a big importance” in the restaurant.

And this whole team creates an experience.

“The experience is, for me, the most important,” says Dunand Sauthier. “People should leave happy — every time.”

FURTHER READING: The Future Of Luxury Travel: How Hotels Balance Comfort And Safety In Re-opening

10 Executive Lunches Under 3,000 Baht From MICHELIN-Rated Restaurants In Bangkok

These surprisingly affordable set lunch menus are some of Bangkok's best-kept secrets.