There is a refrain that Bangkokians hear again and again when they go on holiday in Chiang Mai. “Eat some khao soi for me.” “Have you eaten the khao soi yet?” “How was the khao soi?”

Of course, there is nothing wrong with a good plate of khao soi. As a symbol of Northern Thailand's regional identity, you can find it almost anywhere in and around Chiang Mai. But Northern Thai cuisine is more than just one dish, and fewer chefs have done as much to expand Chiang Mai's culinary reputation as Phanuphol “Black” Bulsuwan of MICHELIN Plate recipient Blackitch Artisan Kitchen. 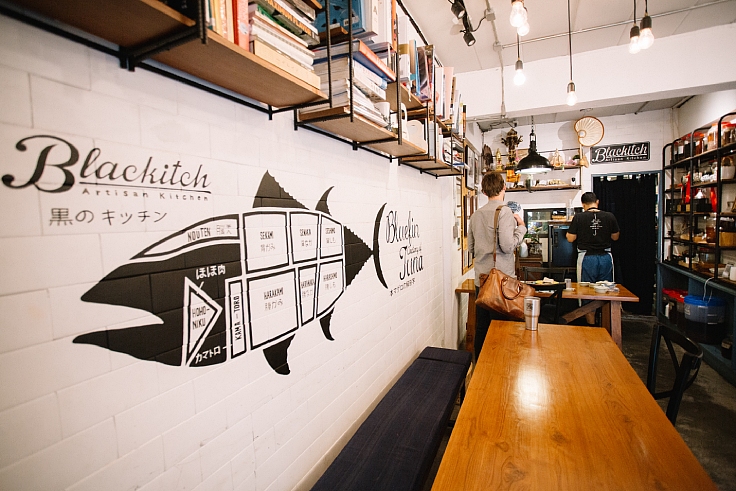 It is hard to imagine a more unassuming space than Blackitch's. With just a few seats above a gelato shop in Chiang Mai's Nimmanhaemin neighbourhood, it feels more like a living room, especially with its goldfish tank, antique clock, and cluttered bookshelves, than a renowned chef's table. Were it not for the Magnus Nilsson and Rene Redzepi cookbooks on the shelves and the dizzying array of jars packed with fermenting fish and fruit, there would be little indication that this was one of Thailand's most exciting restaurants.

Chef Bulsuwan says simply, “I cannot define my cuisine, not Western style, not Thai style, not Japanese style. We are focused on the ingredient. And we base it on our experiences.” Asked what he is proudest of on his menu, he replies, “We don't have a 'menu.' We change everything every month. We don't define ourselves. One day we do Chinese. The next day we do Japanese. Or we mix them together. That's it.”

READ: The Nose, The Tail, And Everything In Between With Chalee Kader Of 100 Mahaseth
Advertisement
Advertisement 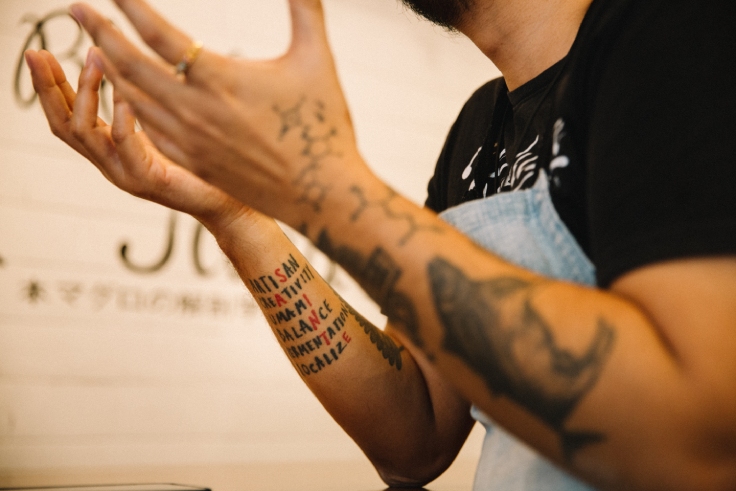 That might sound a bit vague, but the constant is creativity. Bulsuwan's menus span continents, freely taking influence from whatever crosses his unceasingly inventive mind. For example, his lineup for February 2021 was Chinese with a strong influence from Betong, a small city he recently visited on the Thai-Malaysian border. Featured dishes included local Betong chicken and bak kut teh, an herbal stew with its roots in China's Fujian Province, widely associated with the Chinese community in Malaysia and Southern Thailand.

Furthermore, it would be difficult to talk about Chef Bulsuwan's cuisine without talking about his background as a civil engineer who worked around the world. Whether it is the detailed notes scrawled on the sides of pickle jars and plum wine bottles, or the structural diagrams of various molecules tattooed on his arms (MSG taking a prominent place), it quickly becomes obvious that he applies that precision and discipline to his cooking.

Despite this globetrotting and scientific mind, the mission of Blackitch Artisan Kitchen at its core is rooted in locality. Asked about using local versus imported ingredients, he responds straightforwardly, “I don't use imports. At all.”

How is this even possible? 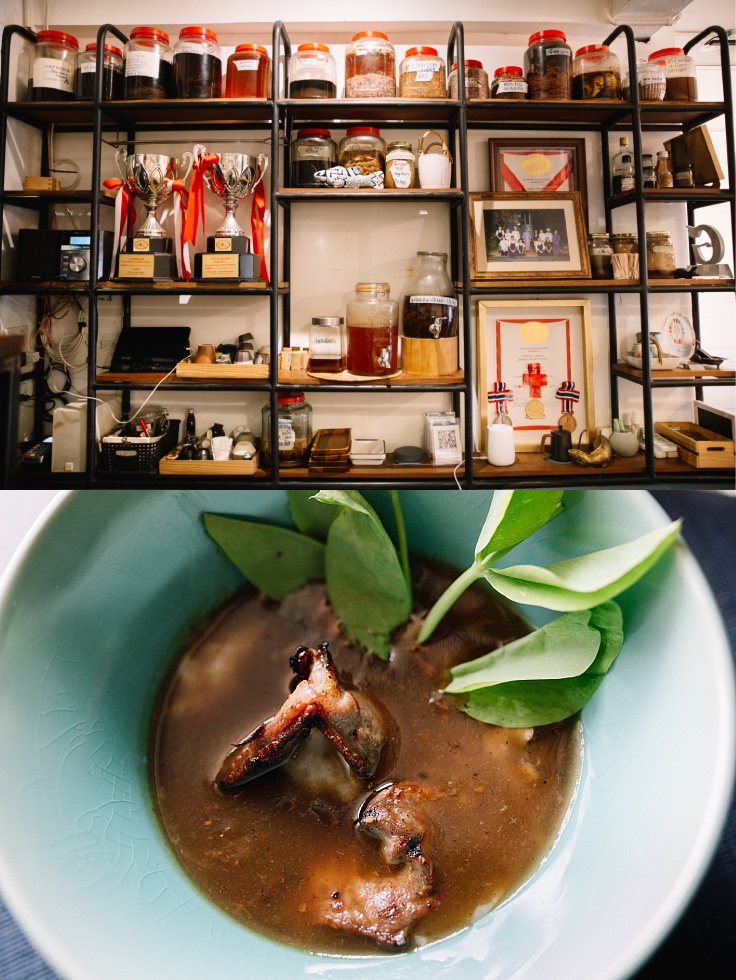 After centuries of globalisation increasing access to myriad ingredients, restricting one's options to just one region may seem like an overwhelming challenge. But as is so often the case, constraints are the key to creative exploration.

The chef and his team travel the country, seeking out new and often-neglected ingredients like foraged mushrooms (he waxes rhapsodic about a mushroom he found in Udon Thani that amazingly tasted like pork), wild vanilla, and little-known fish. “You go to a local market, and you find some vegetable you didn't know about.” This, he admits, can be challenging, as this local knowledge he prizes is not widely available online. “If we work with the farmers, the fishermen, we have our friends. And we can connect with others.” 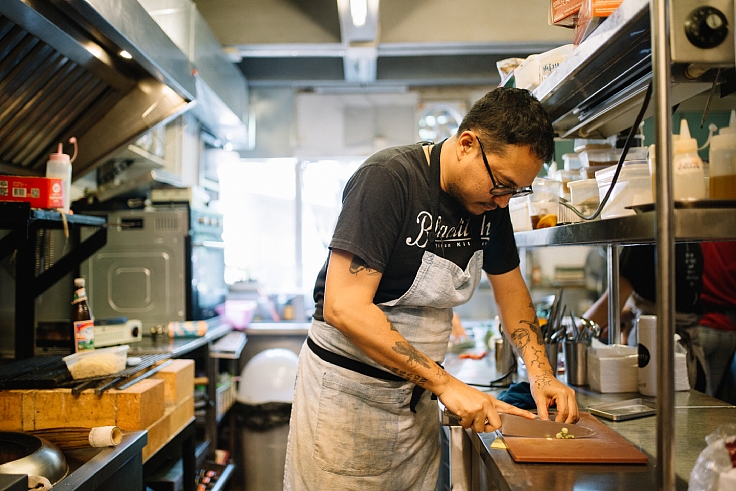 The chef who honed his cooking and fermenting skills under his restaurateur grandmother. (© Jirawat Veerakul / MICHELIN Guide Thailand)

These ingredients are not produced on anywhere near the industrial scale that characterises so much of the modern food economy, so they are necessarily highly seasonal. It would be easy to assume that the year-round tropical temperatures mean year-round availability, but this is not at all true. “The season for some fruits, some vegetables is just seven days. This is true for proteins too. Maeng man (a type of subterranean ant), we only have 15 days to collect it.” Nevertheless, this constraint can be inspirational, facing the challenge of using these seasonal ingredients to their maximum potential at the peak of their freshness.

Another way of dealing with seasonality and locality is among the oldest techniques in the world – preserving, pickling, fermenting, drying, smoking, confiting, curing, candying, or otherwise extending the lifetime of an ingredient. 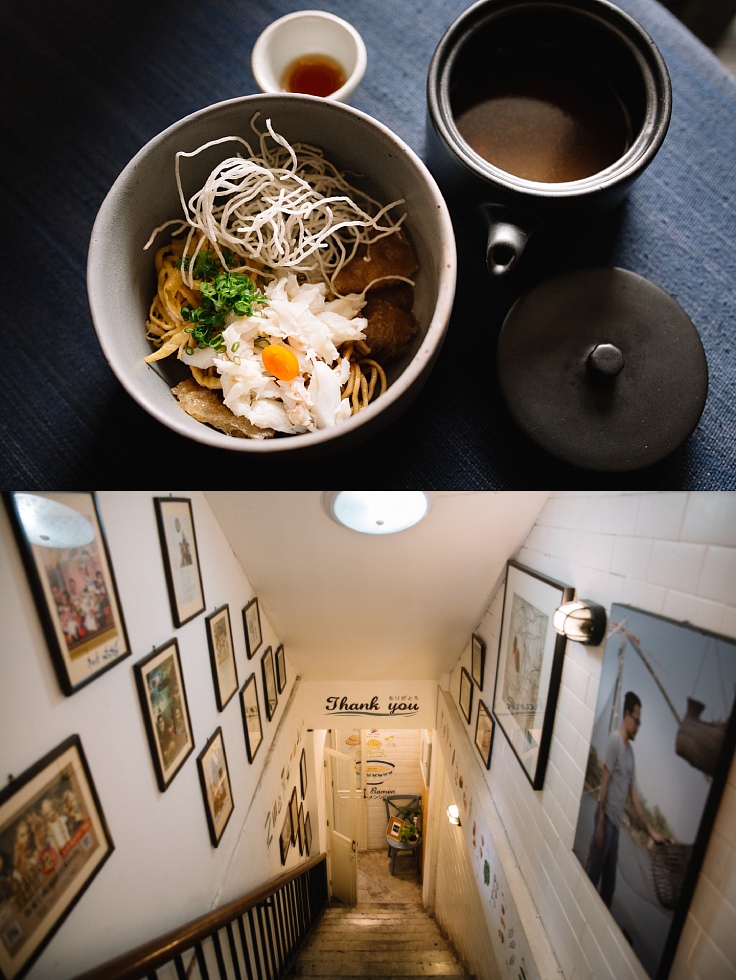 Walk up to the second floor of a gelato shop to enjoy one of the chef's creations, noodle with XO sauce served with blue crab meat in fish maw broth. (© Jirawat Veerakul / MICHELIN Guide Thailand)

At Blackitch, fermentation plays a huge role, which explains the many jars in the dining room and hallway. Some are familiar as apples and cucumbers, and some are potentially intimidating as insects soaking in mysterious brown broths. The once-necessary technique becomes a creative medium to unique, delicious flavours. Chef Bulsuwan also points out how fermentation encourages sustainable production. “We make soy sauce, fish sauce, vinegar, oyster sauce, chilli sauce, everything... Most are from the waste in our kitchen, from stems, from bones.”

By bringing out each dish to diners in a chef's table format – Chiang Mai's first – Chef Bulsuwan and his team educate guests about how local ingredients made it from nearby fields, forests, and waterways to their table. Each seating is not just to serve a good meal, but an opportunity to teach, and an opportunity to tell a story.

Further proof that some of the best experiences begin one spoonful at a time.

Here’s What Our Inspectors Said About Blackitch Artisan Kitchen (Plate)
Hidden in plain sight in the city centre is this 16-seater spot where Thai and Japanese influences shape the tasting menu. The 9-course selection changes constantly, dictated by what is local and in season. Chef Phanuphol Bulsuwan honed his cooking and fermenting skills under his restaurateur grandmother. He’s known locally as a fermentation master, turning kitchen scraps into fermented seasoning ingredients, at least one of which always makes its way into each dish.

CONTINUE READING: The Locavore Trend In Chiang Mai: Growing The Seeds Of A Movement