From getting to know the origins of the meat and vegetables to collaborating on the design of the dinnerware, chef Julien Royer of Odette takes pride in all things made by hand.

For chef Julien Royer and in his kitchen in Odette, seasonality and terroir have always been paramount when sourcing for produce, and how he has forged relationships with craft producers.

He believes the most important undertaking of a chef is to seek out artisanal produce to find something unique. Not only does he want to know where it is coming from, he also wants to know who grew it.

“Artisanal, for me, is something that involves the hands of a man or woman. It’s the notion of working with your hands and the work of the hands is very important. It’s really the work of the soil, the knowledge of growing a product, the knowledge of mastering or passing something from the soil to the sea to the people in the kitchen —to the chefs.“

In the same way, the crafting of each dish at the two-Michelin-starred Odette is an artisanal act, from the selection of produce down to the choice of every knife and fork.

To him, the arts de la table, or table setting, is a beautiful phrase for something pristine and very special. It is almost an artform. 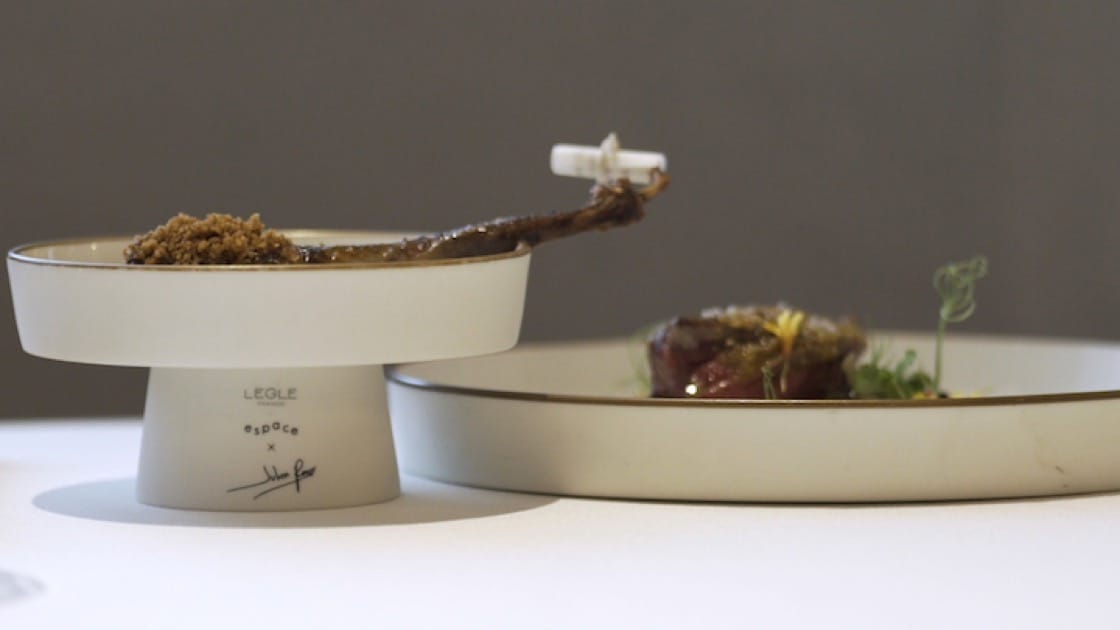 He takes a lot of time as well as pleasure in it — choosing the right glasses, the right linen for the table, the right cutlery. Odette is the first restaurant in Singapore to bring in handcrafted cutlery and knives by renowned chef Yves Charles of Perceval Knives in Thiers, the knife capital of France. The restaurant also commissioned pieces from &natural, a ceramics design studio based in Singapore known for its thoughtful approach to the craft.

Royer’s appreciation of fine craftsmanship also sees him bringing to the table other artisanal suppliers such as Montgolfier, Sugahara, Safran, Kevala, Luesma & Vega and Serax.

Taking thing on step further last year, he collaborated with French brand LEGLE to create The Espace collection, a modern yet sensuous line of dinnerware. The process was led by LEGLE Asia’s creative director Desmond Chang and officially launched with a grand showcase at Odette paired with its Spring menu.

Produce featured on the menu are stars in their own right. The Axuria lamb in the Axuria Lamb En Croûte is reared by small artisanal Pyrenees farmers sourced from Cooperati. The ewes give birth to the lambs in the mountains and they suckle only on their mother’s milk for up to 42 days.The conditions in which the lambs are reared means they are free from antibiotics and hormones.

The pigeon is Royer’s signature and he specifically uses pigeon from Plouneour Menez, a small village in Finistere, Brittany, France. These pigeons are fed a nutritious mix of 75% organic corn and 25% flaxseed, barley, organic minerals and water. They are allowed to mature longer, slaughtered at 35 days instead of the usual 20 to 25 days, which is the norm for 95% pigeons bred for culinary use. Production of these pigeons is limited to 500 birds a week. 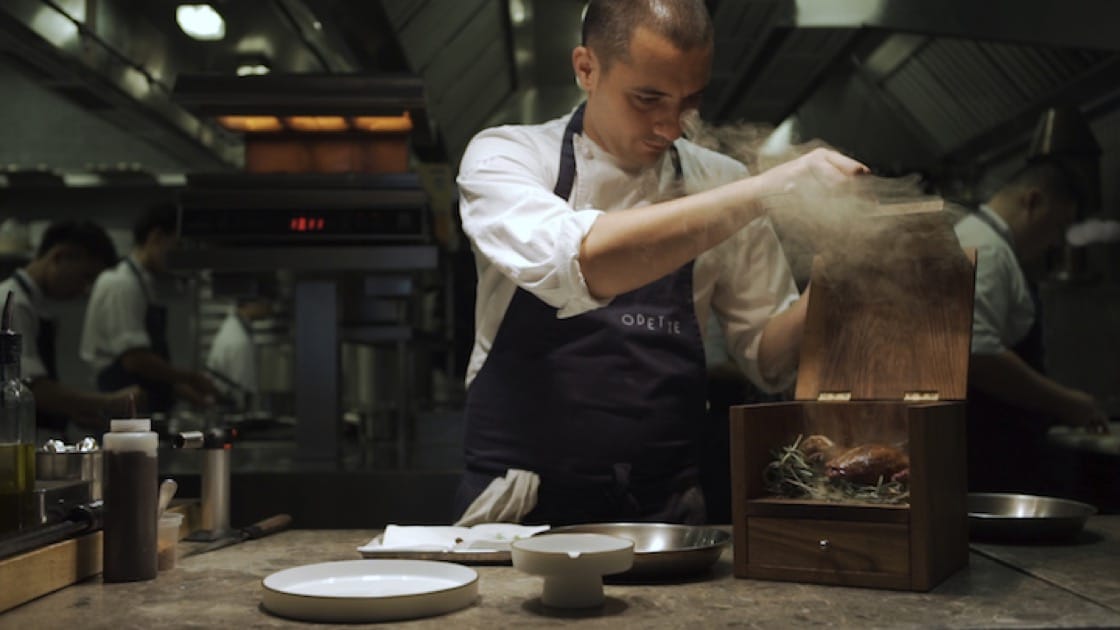 Royer believes the values held by craftsmen define the work they do. He attests also to the high standards every artisan has to uphold in order to reach a very high quality and achieve consistency.

“You have to respect Mother Nature and be very persistent and passionate, because sometimes the elements are against you. “

He adds: “I think artisanship goes to the roots of culture, tradition and, if you go deeper, humanity. Because a lot of the culture and tradition comes from the way we eat, the way we cook and also the way the farmers grow the ingredients.”

And as someone who receives the beauty of artisanship almost daily in his restaurant, Royer commits himself to handling ingredients with a high level of craftsmanship and treating them with care in order to highlight the purest flavours.

“It’s our job, our duty, our responsibility to treat it with respect, whether it’s an onion or lobster, and to really try to give the best of it. These things are getting more and more rare, more precious.”

Royer’s appreciation of the produce of the land and the work of the hand stems from his childhood in his hometown of Auvergne, France, surrounded by farms and farmers. He remembers being with fantastic produce and ingredients, and eating with the season. 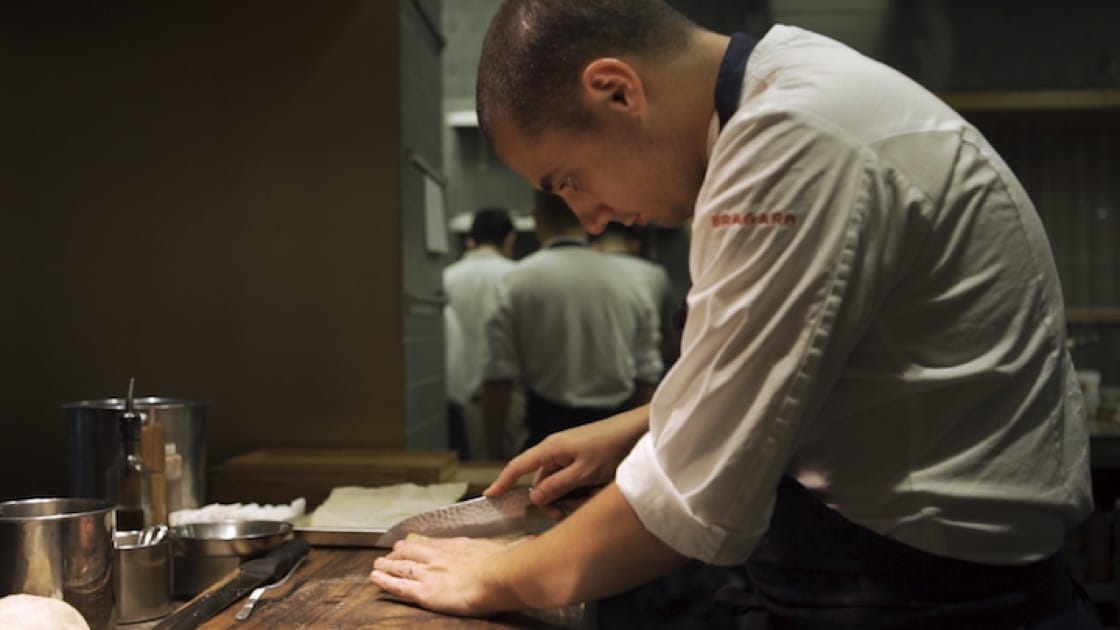 His eyes shine as he reminisces: “My mum, my grandma and my family knew how to cook and also knew how to harvest. They knew how to grow beautiful gardens and knew how to use all the products surrounding the house. So when I was a kid, I don’t remember going much to the supermarket. We ate what we grew ourselves. We ate our own chickens, our own eggs, my grandma was making the bread, the pastries, the jam, preserving some fruit. We really have this knowledge of handling nature.”

One of his strongest memories of food was the smell of the jam his grandma made, patiently stirring it in an old copper bowls for hours.

“She cooked jam during the summer, a beautiful red currant jam with a touch of vanilla and a beautiful raspberry jam. I was always the one checking if the jam was ready. This is a priceless memory, the smell of the berries around the whole house — it’s a memory I will always remember and cherish.”

From then, Royer knew he enjoyed being in the kitchen and tasting the food and ingredients. In his family garden, as a child, he was given a “small square” of land and taught how to plant tomatoes, peas and other produce by his grandparents and parents.

“People sometimes ask how I am inspired by your grandmother, since the restaurant is named after her, and how she inspires me when I create dishes. I often answer that it’s not about the creation of the dishes, it’s more of the cooking philosophy that she passed to me, deeply grounded into me. It’s about taste, pleasure, the simple act of cooking for and giving to people. 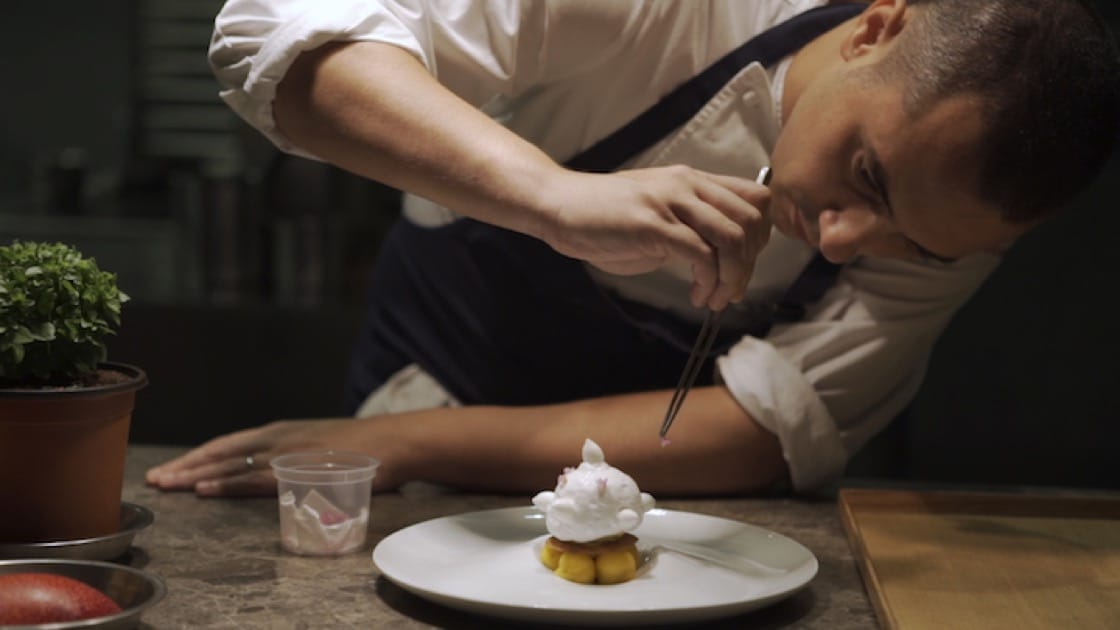 “She was really focused on bringing us pleasure through cooking. Her cooking was very rustic, very family style but very very tasty. She used the products from the farm and the products that were in season, so we got the taste of the real thing. I can clearly say that this inspired me, and the restaurant here, to cook whatever is in season. We hope to give back to the original and pure taste of each produce and ingredient to each place. ”

As recent as three to four years ago, Royer admits that he tended to add more on each plate, but he now does less. This constant act of evaluation and redefining, and the pursuit for simplicity and focus let his cuisine turn out to be, in his words, “easier than before”. However, it’s giving more pleasure than before due to less complexity and greater depth in terms of taste.

“I think the beauty of our job as a chef is being able to give emotion to people through food and cuisine. If we are able to touch people with our food, and sometimes people get very emotive about it, I think it’s beautiful. It really is one of the most beautiful and unique things about our job. “

And this is something that I learnt from my grandma. She gave me so much happiness and emotion as a child — this is exactly what I’m trying to do today in a restaurant.”

Looking back on his journey, Royer says cooking has taught him about patience and fulfilled him. As in any craft worth learning, the culinary arts need time to perfect. “Good cooking takes a lot of time. If you want to do things very nicely, very perfectly, it takes a lot of time. Cooking helped me to become very patient.”