Industry Insider: My Day In A Wagyu School In Japan

Andre Huber, executive director of meat purveyor Huber's Butchery, learns all about wagyu, from farming the cattle and processing the cuts to cooking the meat.

In January, I attended a one-day meat class at Federal Meat Academy in Gunma Prefecture in Central Japan. The session, which was organised by Japan's Wagyu Beef Export Promotion Committee, was an opportunity to learn more about Toriyama wagyu.

Farmed exclusively by the Toriyama family for more than 30 years, the beef prides itself on an umami flavour, while some wagyu boasts a melt-in-your-mouth texture without much flavour—a sign of higher oleic acid than amino acid in the meat. The farm co-breeds specially-selected cattle with good genetic bloodlines and meticulously keeps track of date, type of feed and well-being of the cattle for more than 10 years. The farm even owns a patented technology to measure the “amount of umami” of the meat based on the fatty acid composition.

Out of 1,200 cows on the farm, only five are imported here monthly. They are used in six restaurants including the one-Michelin-starred Corner House, Tippling Club and Ki-sho. The Toriyama wagyu is also sold at Huber's Butchery in Dempsey Road. 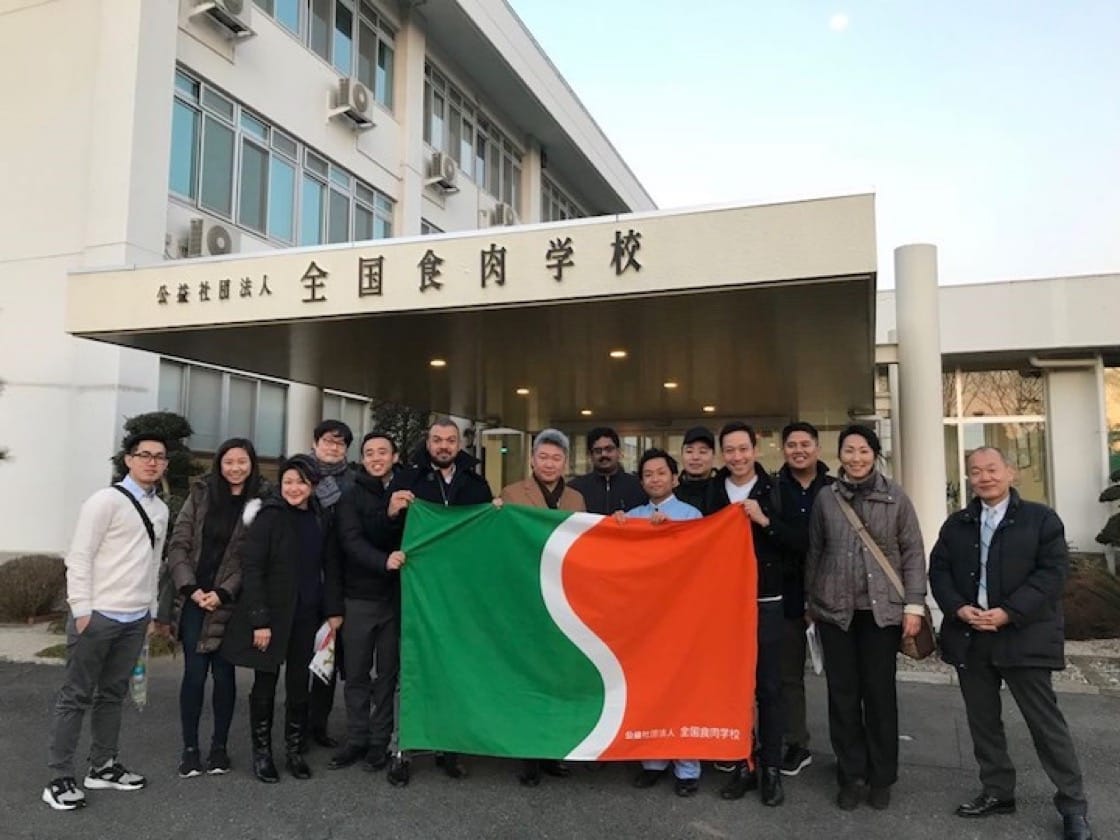 Andre Huber (4th from right) with a group of meat importers from the United States and Indonesia at the Federal Meat Academy in Gunma, Japan. 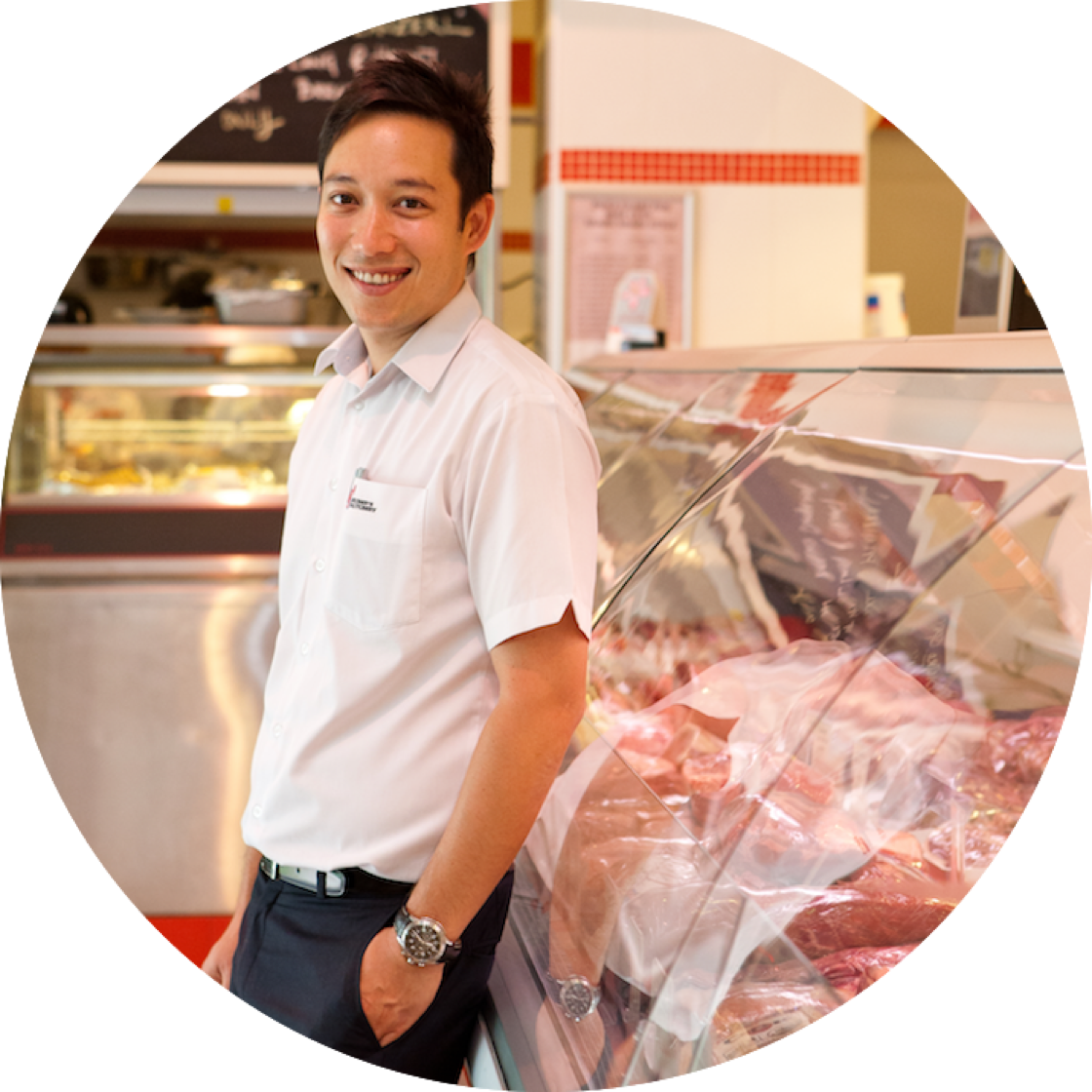 The next morning, we headed to school at 8:30 a.m. and were all covered up in protective gear. After several warm greetings, the theory lessons on wagyu started. My fellow “classmates” were importers from the US, Taiwan and Indonesia, while our instructor, Mr. Samata, a beef educational affairs official. I was accompanied by my factory production manager, Kumar and retail butcher supervisor, Lucas, who were both as excited to learn more about wagyu and experience Japanese culture.
Advertisement
Advertisement

Lesson #1: Each wagyu is fully traceable back to three generations.

Mr. Samata shared that more than half of Japan's 2.5 million cattle are reared for its meat. Of which, more than 90% of them belong to the Japanese Black Hair breed. The other breeds are Japanese Brown, Japanese Shorthorn and Japanese Polled.

Next, I learned about the cattle registration system was introduced in 1920 and refined in 1948. Every cattle comes with a birth certificate, and unlike humans who use thumbprints, the identification of cattle is based on their unique muzzle pattern. Each cattle also has an ear tag with a unique identification number.

Upon slaughtering, the cow's DNA is collected and the identification number of the cattle is printed on the packaging of its meat. If there are doubts over the cattle's authenticity or health, the meat can be tested for its DNA and it will match the records in a centralised wagyu traceability system.

Next, it was time to learn about the meat grading system which was developed to objectively judge the quality of meat. Beef grading is categorised into A, B or C for its yielding grade, meat colour and fat colour. Meat grades 1 to 5 refer to the amount of marbling with 5 being the highest. So, A5 is considered to be the best grade. 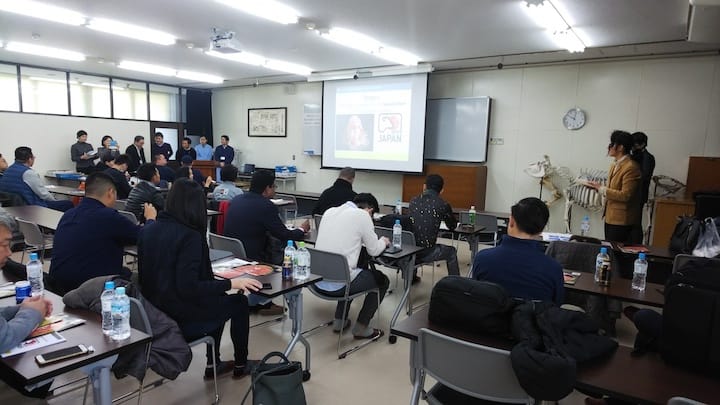 The wagyu theory class covers the origins of the wagyu to the traceability system of the cattle.
Lesson #2: The best temperature to cook wagyu at is at 80°C.

Mr. Samata explained that wagyu beef has a soft and smooth texture because the red meat muscle fibres have a juicy, fine texture while the white fat marbling has many unsaturated fatty acids, which makes its melting point low. Japanese wagyu has a lower melting point of 26 to 30°C. Hence, the meat or rather fat, literally, melts in your mouth as the temperature in one's mouth is around 35°C. He adds that wagyu beef gives off a sweet and rich aroma when cooked that is reminiscent of coconuts and the best temperature to achieve that aroma is to cook the meat at 80°C.

Lesson #3: No music or massages for the cows.

Wagyu cattle is raised on green pastures for eight to ten months. Later, they are farmed in barns where they specially fed with highly-nutritious grains and rice straw. Contrary to popular belief, the cows do not enjoy music, massages—or even beer—to yield more tender meat. After the theory lesson, we proceeded to the processing room but not before putting on boots, jackets, hair nets and face masks. 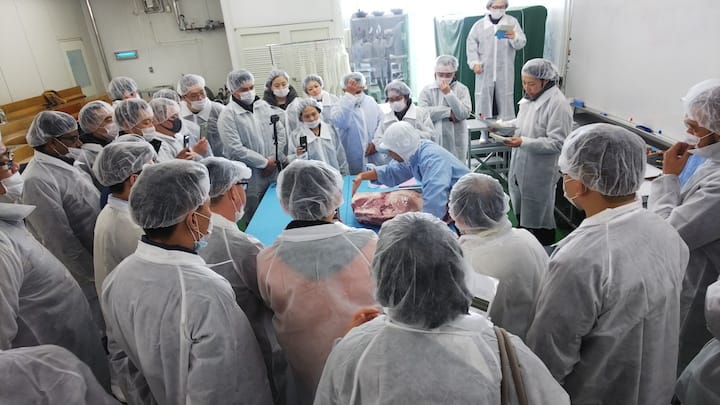 An instructor demonstrates how to break down parts of a wagyu.

Lesson #4: Even the secondary cuts of wagyu are well-marbled.

At the processing room, our practical lessons started with a demonstration on breaking down the big primal cuts of a wagyu. Now this is where things get interesting.

Typically for most beef, you do not break down a chuck roll into different parts, you simply mince, roast or cut it into cubes for stews. The most tender parts are usually portioned into steaks, and then yakiniku, followed by sukiyaki and shabu shabu, and the last being portioned into cubes for braising or stewing.

For Japanese wagyu, even the secondary cuts are marbled and tender to varying degrees. Each cut is assigned to its best use and the value attached to it. One can downgrade a piece of meat but one should not upgrade a meat after its grade has been determined.

Lesson #5: The more frequent a cow moves its muscle, the tougher it becomes.

Mr. Samata explains that the general rule for meat (and is no different for wagyu) is that the more a muscle is used, the tougher the meat becomes. He proceeds to wield his super sharp knife as he first removes the neck portion from the chuck roll. The neck portion is one of the toughest as the cattle moves his head up and down to consume food. The neck is best used to cook stews. 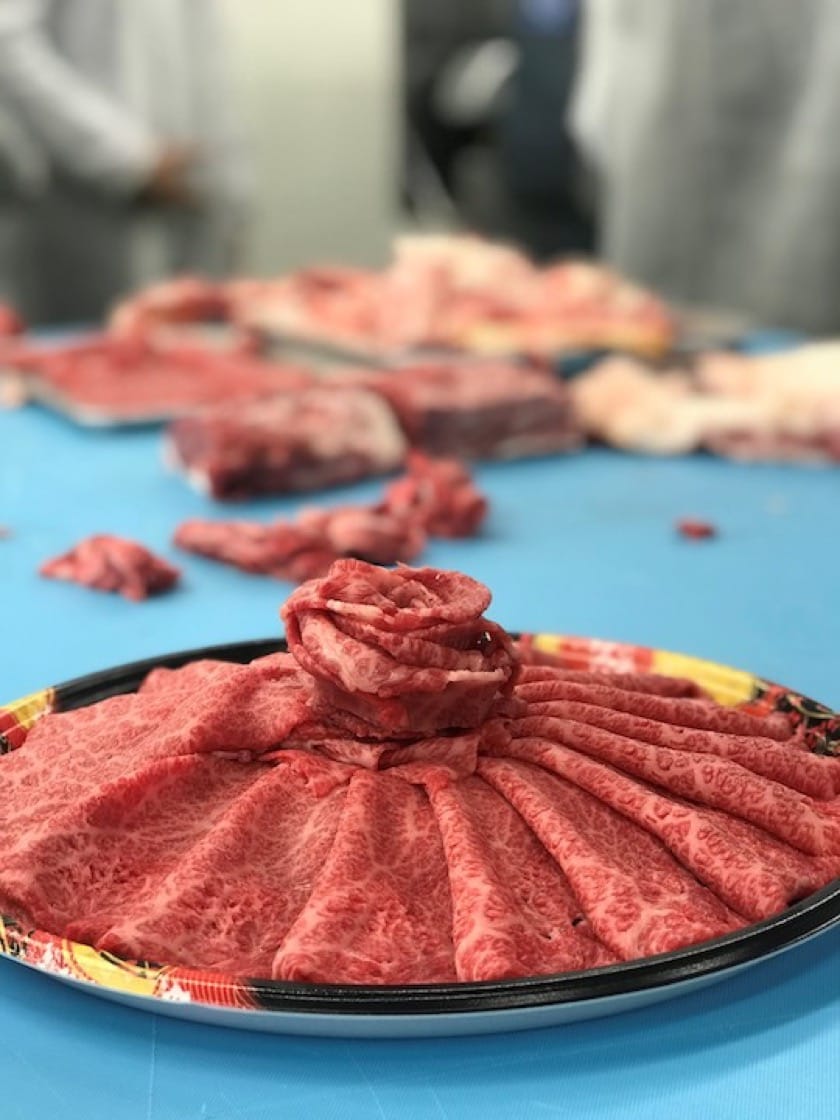 Lesson #6: The anatomy of a wagyu cattle.

I like how the instructor presents a tray of shabu shabu with a “meat rose” in the middle that would make any girl blush. “Beautiful meat deserves beautiful presentation,” he exclaimed.

For lunch at the meat school, we each received a beautifully-wrapped bento box that ironically contained... chicken.

Lesson #7: The prized cuts of a wagyu.

After lunch, the class continued with a showcase of breaking down the shoulder clod, which is more complicated than breaking down the chuck roll. I liked how the instructor made references to his body to show various parts of the wagyu cattle.

Then, he showcased one of the most marbled and sought-after cuts in Japan—the aka misuji (top blade or oyster blade). However, a lot of work is required to remove the silver skin and the gristle in the centre. The shoulder clod is further cut into various sections such as the upper oyster blade (uwamisuji) and chuck tender (tougarashi). Now, it was time for some hands-on action. We cut the meat into steaks, yakiniku and used a slicing machine to turn out shabu shabu slices. 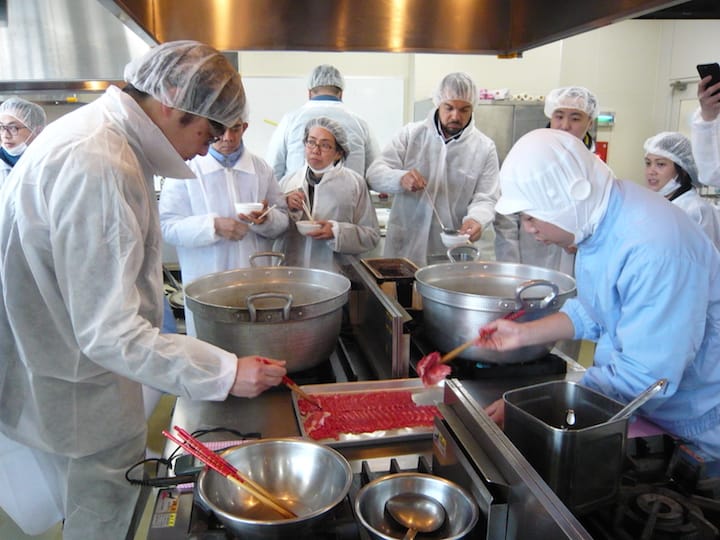 It's time to learn how to cook different cuts of wagyu.

After working up a sweat, we were brought to the adjoining kitchen to cook the meat.

The neck cubes were braised in a pressure cooker for 30 minutes, and we tucked into steak cubes, yakiniku seasoned with tare sauce, and sukiyaki served with a raw egg and shabu shabu with a killer ponzu dipping sauce.

I was taken aback by the amount of effort that the instructors took to ensure that we tried every cut of the cattle and showed how each cut should be savoured. Finally, we sank our teeth into the stewed beef neck which was meltingly tender and tasty. The only problem was that we had way too much and started feeling like wagyu ourselves!

The meat school session ended with a certificate presentation and photo-taking ceremony. Of all the one-day training sessions that I have attended, this has got to be one of the most informative ones.

All photos courtesy of Andre Huber.

Jonathan Kinsella, executive chef of db Bistro & Oyster Bar, tells us how stand-up comedy plays a part in his cuisine.