Thanks to new technologies and innovations in food research, alternative meat products on the market now no longer taste like cardboard. Here are some of the brands available around the world that are producing imitations of meat that replicate the taste and texture of chicken, beef, pork, turkey and eggs with extraordinary likeness. 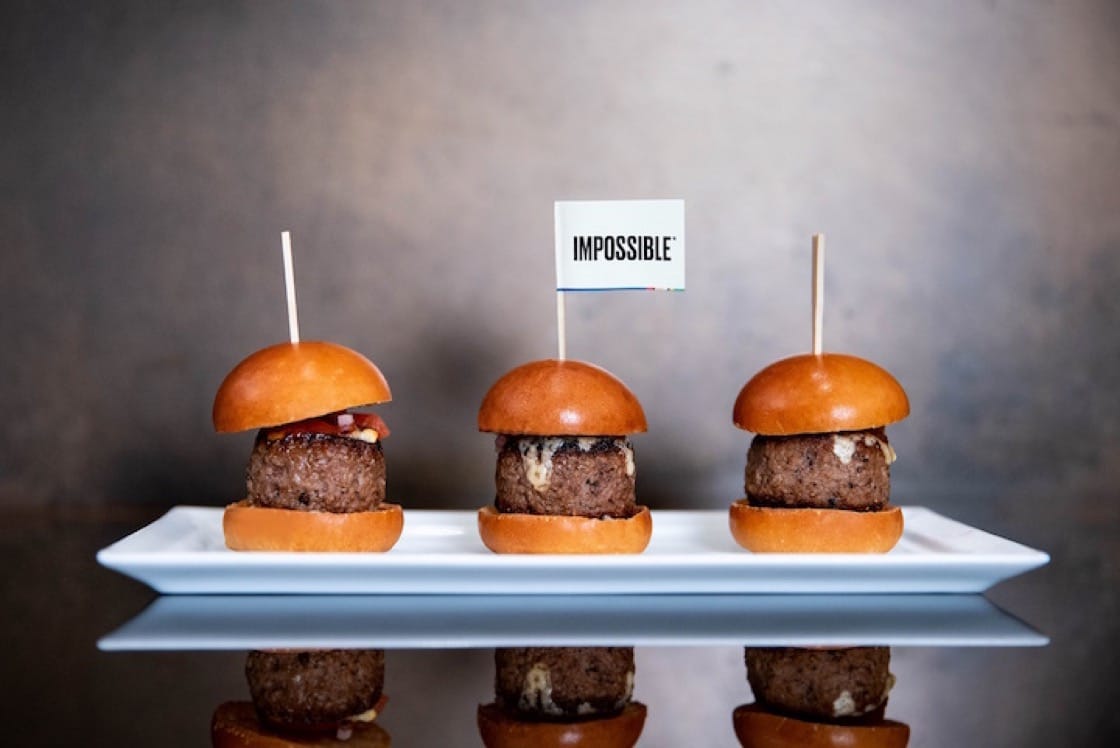 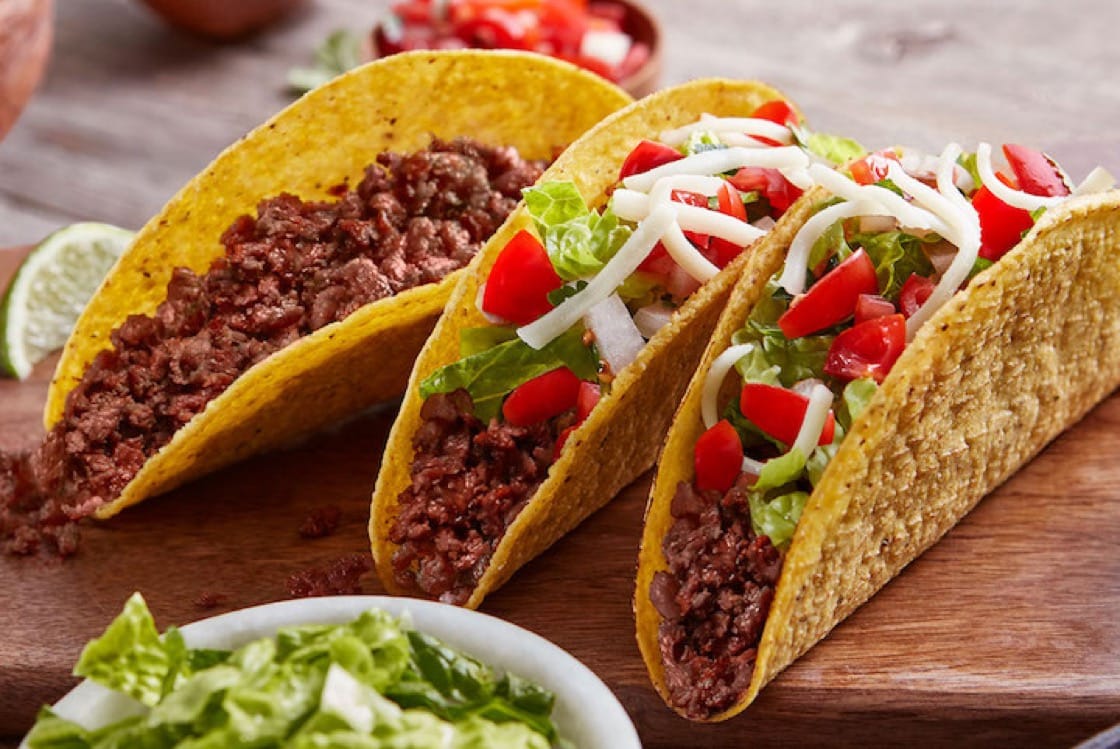 Beyond Beef Crumbles made into tacos (Pic: Beyond Meat)

Beyond Meat
Who made it: Beyond Meat was founded by CEO Ethan Brown in Los Angeles in 2009, becoming available across the US at Whole Foods Market in 2013.
What is it: Beyond Meat’s vegetarian meat substitutes are made mainly from pea, beetroot, coconut oil, canola oil and potato starch.
What it tastes like: The “meat” sizzles and oozes fat (from canola and coconut oil) into the pan and has a mild, pleasant flavour and tender texture.
What products: The Beyond Burger, which is a plant-based patty, Beyond Sausage in original and hot Italian, and Beyond Beef Crumbles which work in ground beef recipes.
Where to find it: Beyond Meat is available in supermarkets, restaurants and wholesalers in the US, Canada and the UK, and recently launched in Hong Kong and Singapore. 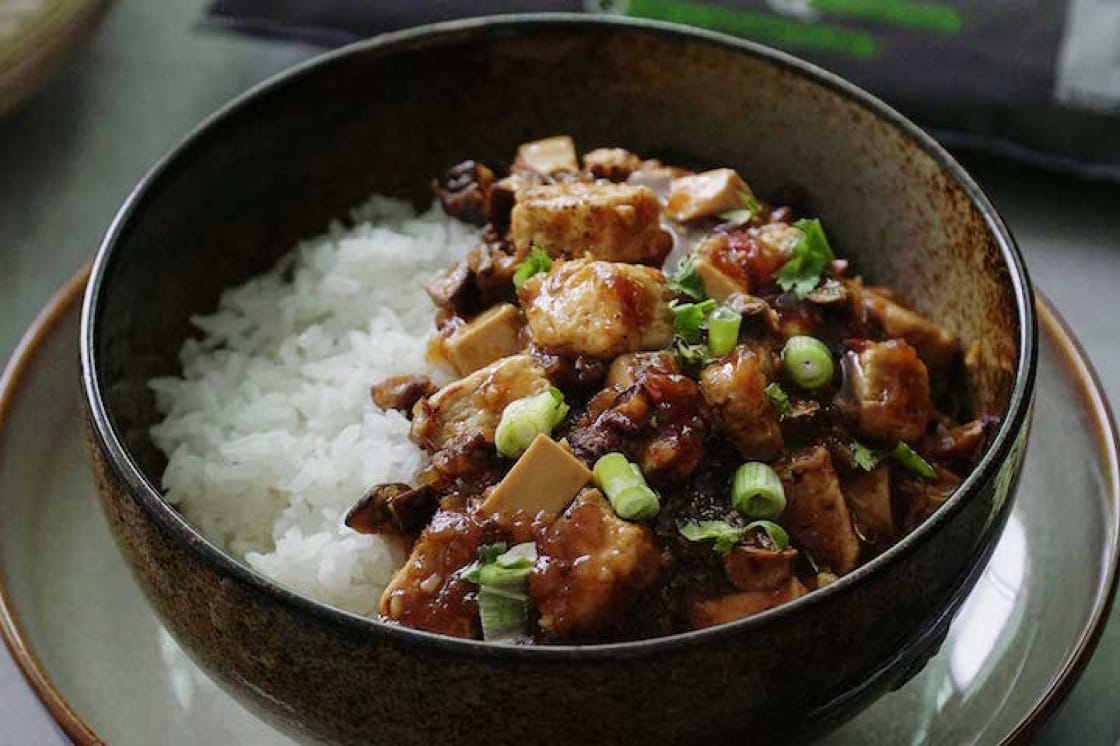 Quorn
Who made it: Quorn was launched in the UK in 1985 by Marlow Foods and is now owned by Monde Nissin Corporation. It was named after the Leicestershire village of Quorn where it was first produced.
What is it: Quorn is a meatless chicken-alternative made from mycoprotein which is produced by adding oxygen, nitrogen, glucose and minerals to a fungus called Fusarium venenatum and fermenting it.
What tastes like: It tastes like chicken in terms of its lean, meaty texture and mild mushroomy taste.
What products: At the frozen aisle, you’ll find Quorn ready-to-cook burgers, sausage patties, nuggets, Southern fried bites, meat-free pieces, mince and breaded fillets.
Where to find it: Quorn products are available in many parts of the world including the United Kingdom, United States, Italy, Australia, New Zealand, the Philippines, Thailand and Singapore. 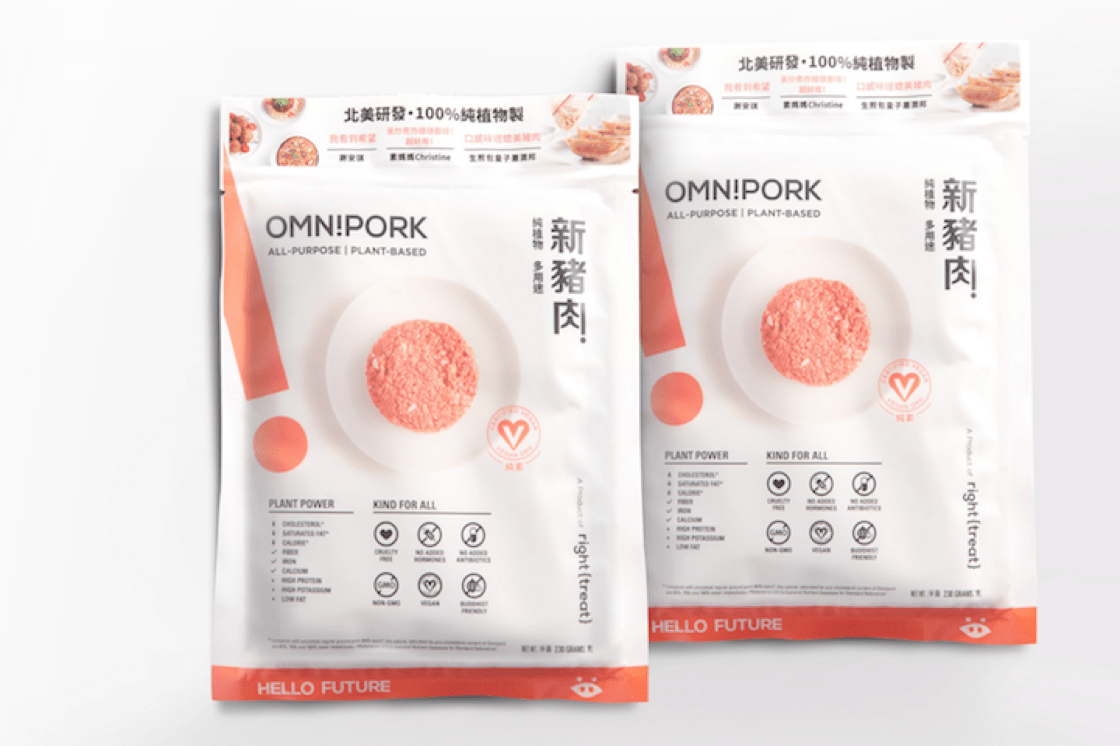 Omnipork is found in the frozen section (Pic: Omnipork)

Omnipork
Who made it: Omnipork is launched by Right Treat, a venture under Hong Kong’s Green Monday group. Founder David Yeung is an investor in Beyond Meat which developed plant-based chicken and beef, but saw a gap in the market for alternative pork.
What is it: Omnipork is a blend of shiitake mushrooms, soy and pea and rice.
What it tastes like: Succulent, tender and juicy, Omnipork can be steamed, pan-fried and deep-fried, lending itself well to Asian dishes like xiaolongbao and sweet and sour pork.
What products: The plant-based meat comes frozen in minced patty form.
Where to find it: Omnipork is being served in restaurants in Hong Kong, Macau and Singapore, and can be purchased from supermarkets and speciality grocers in Hong Kong and Macau. It is also making its debut in Taiwan this month. 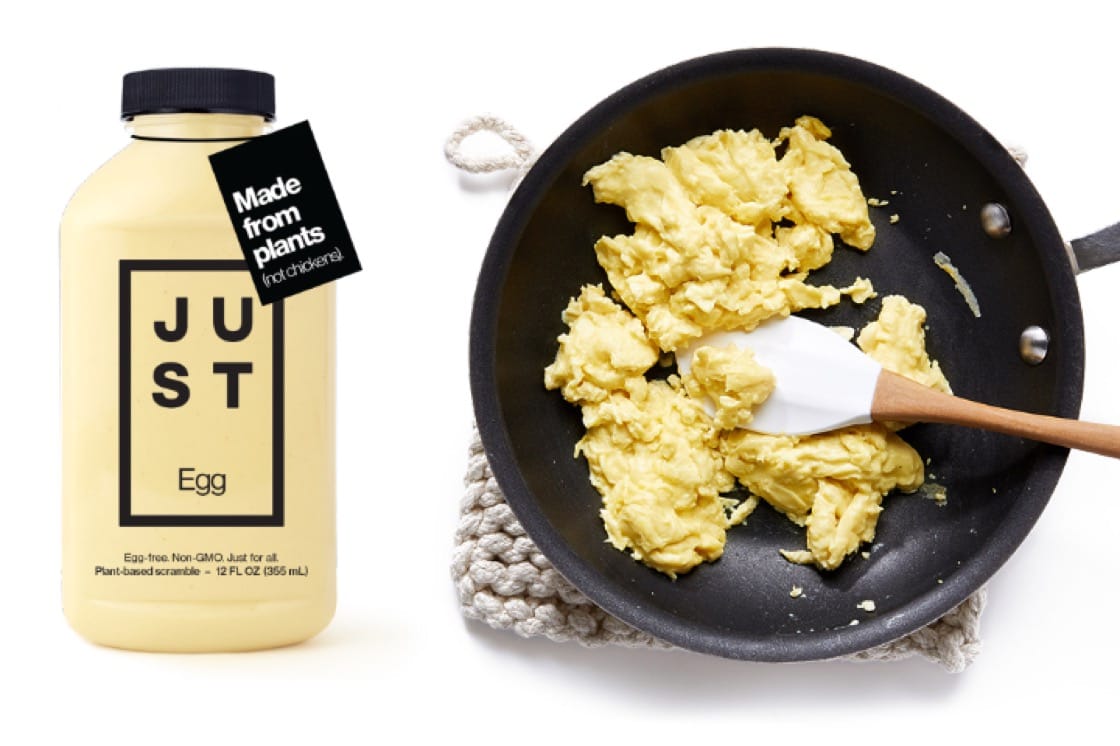 JUST
Who made it: The San Francisco-based firm was founded by Josh Tetrick and launched its flagship product JUST Mayo — an egg-free mayonnaise — in 2013,  and JUST Egg in late 2017.
What is it: JUST Egg is a liquid “egg” is made from water, mung bean protein isolate and canola oil.
What it tastes like: JUST Egg looks, cooks and tastes just like scrambled egg, forming fluffy curds in the pan. It can be used in French toast, fried rice, quiches and omelettes but is not recommended for use in baked goods.
What products: Other than JUST Egg, which comes in pourable liquid form and frozen egg patties, the company makes vegan salad dressings, mayonnaise and cookie dough.
Where to find it: JUST Egg is available for retail in the US and partnered with Italy-based egg leader Eurovo in 2018 to produce and distribute the product in Europe. JUST Egg made its South-east Asian debut last year in Singapore. 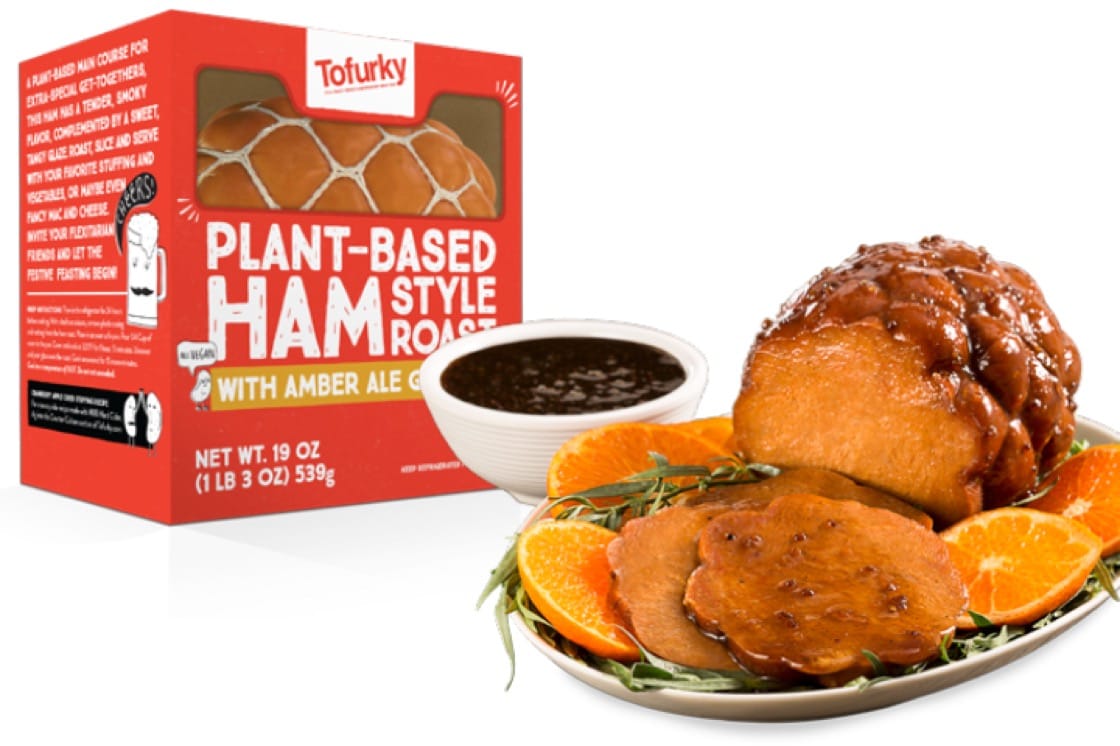 Tofurky
Who made it: Tofurky was introduced in 1995 by Turtle Island Foods, a company based in Oregon in the US. Seth Tibbot founded the company in 1980 making tempeh from scratch.
What is it: The vegetarian turkey replacement is made from a blend of wheat gluten, organic tofu, corn starch, organic cane sugar, and vegan natural flavors.
What does it taste like: Tofurky is wheat gluten-based, like the mock meats available widely in Asian vegetarian food, so the taste and texture is similarly chewy and takes on the flavour of whatever it is seasoned and sauced with.
What products: Tofurky makes a whole range of meatless products including whole roast with stuffing, deli slices, sausages, burgers and mince.
Where to find it: Tofurky is available in the US, UK, Australia and at select supermarkets in Singapore.