The Stories Behind Signature Dishes From 6 MICHELIN-starred Restaurants

If a vegetarian Belgian chef or an Australia-raised Basque chef had to be defined by a dish, what would they be?

Like artists who sign off on their creations, every chef has a signature dish on his menu that bears marks that are unmistakably his. They tell stories of the personal growth, challenges and philosophical evolution on a chef's journey, whether through stints in different MICHELIN-starred kitchens or on their move from Europe to Asia.

Read about the stories behind the signature dishes of six MICHELIN-starred restaurants in Singapore then try them for yourselves at GastroMonth Singapore 2019 where these, and many more MICHELIN-recommended restaurants, will be serving up thoughtfully designed menus at value-for-money prices.

GastroMonth Singapore 2019 runs from 1 – 30 November,  with exclusive menus that start from S$30 for lunch and S$60 for dinner (all prices in nett) and offer up to 50% savings on the regular menus. Click here to make your reservations. 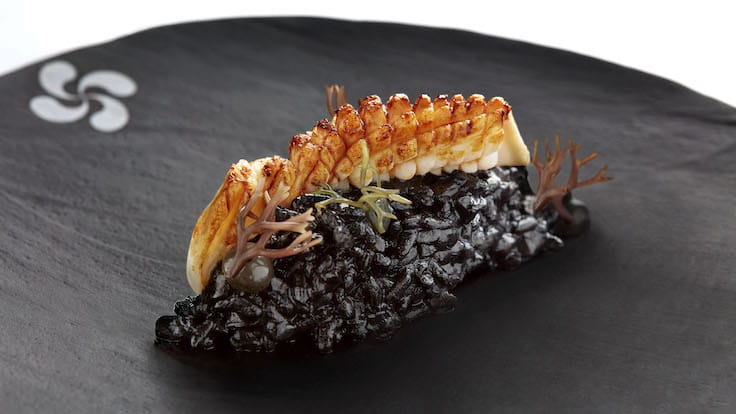 Arroz de Txipis Squid Ink Rice, Black Sesame Aioli and Kabayaki BBQ Squid
Spanish-Australian chef Aitor Jeronimo Orive fronts 40-seat restaurant Basque Kitchen By Aitor on Amoy Street, where he presents his own take on Basque cooking with Asian influences. Orive has deep links with the gastronomic region in northern Spain — his family is from Basque Country and he has also cut his teeth in the world-renowned innovative restaurant Mugaritz. But at Basque Kitchen, the chef embraces his Asian location by marrying Japanese ingredients and cooking techniques with his Basque background. His signature dish of Arroz de Txipis Squid Ink Rice is a case in point. “Squid is an important ingredient in Basque gastronomy and is a homage to my heritage,” explains Orive. “This dish is our modern interpretation of a traditional squid ink rice recipe, but we give it an Asian twist by adding black sesame aioli and kabayaki sauce to glacé the squid." 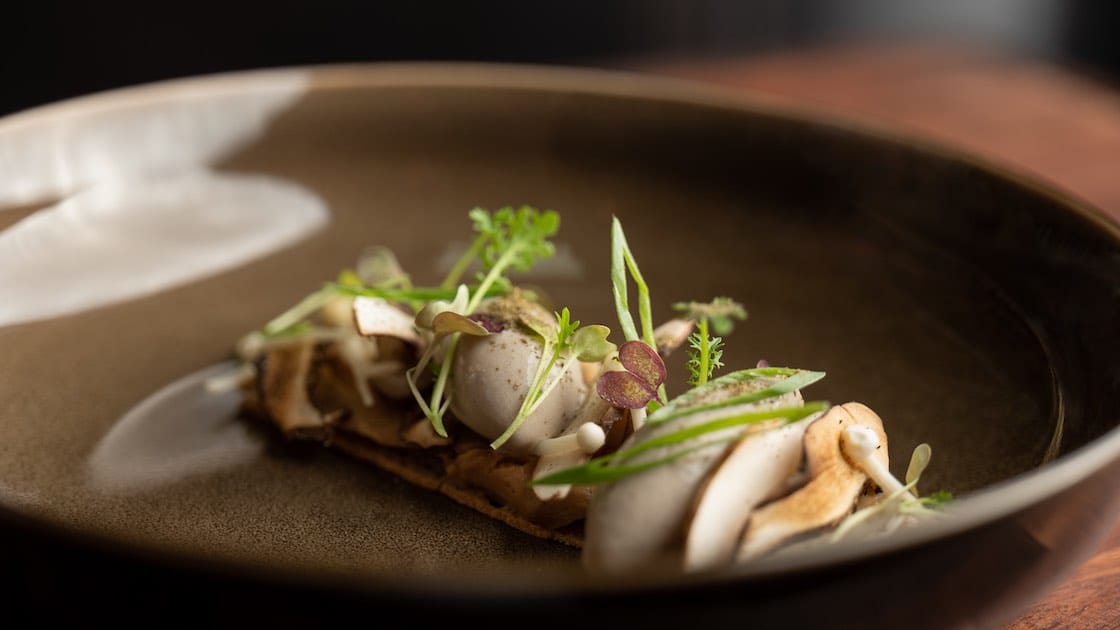 Bouleau Mushroom & Smoked Foie Gras
Chef Jeremy Gillon's hometown in the Savoie region of the French Alps is known for its heavy flavours, but at his restaurant JAG in Singapore, he cooks with a light hand and a produce-forward sensibility. The one signature dish that best encapsulates his innovative approach to the simplest of ingredients, he says, is the Bouleau Mushroom & Smoked Foie Gras. “As with any beautiful and fresh ingredients, I always want to find the balance of upholding the integrity of the natural flavours but while also attempting new cooking techniques. During the initial conceptualisation and experimentation of this dish, we were thrilled to see how much we could push the boundaries with these beautiful mushrooms – given its already unique flavours and distinct textures,” says Gillon. Three types of Japanese mushrooms, enoki, shimeji and shiitake, are served raw, pickled, torched or even whipped into an unusual, umami-rich mushroom ice-cream. To level up the indulgence, these are then paired with smoked foie gras from the Landes region in the southwest of France. 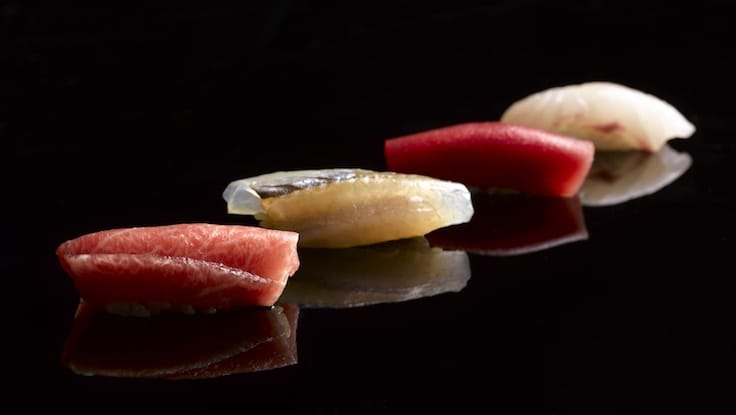 Yoshio Sakuta of two-MICHELIN-starred Shoukouwa insists on only using seafood flown in daily from Tokyo’s Toyosu Market (the former Tsukiji Market) in his nigiri sushi. But the key to his signature dish, he says, is not the fish, but the rice. “Fish on its own does not produce the best taste; only by combining it with rice can the full spectrum of flavours be achieved,” Sakuta says. At Shoukouwa, the sushi rice is dressed in a secret blend of vinegars before and it is draped over with a slice of sashimi. “I depend on my years of expertise to prepare the best rice and pair it with the most ideal fish - that's what makes Shoukouwa’s sushi special.” 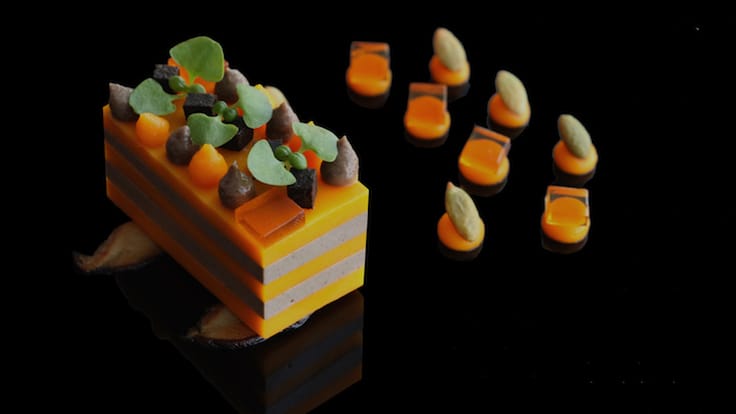 Kabocha Pumpkin, Black Truffle, Holy Basil, Xeres
The proverbial icing on top of the cake for Saint Pierre’s 20th anniversary in Singapore next year is its recent promotion to two MICHELIN stars in the MICHELIN Guide Singapore 2019 edition. Given his two decades of living in Asia, Belgium-born Emmanuel Stroobant’s spin on modern French cuisine comes with pronounced Asian touches, best expressed in this seasonal signature dish that combines sweet pumpkin with earthy black truffle. A terrine of pumpkin and truffle is topped with truffle puree while a jelly made with Xeres sherry vinegar adds a touch of acidity. The vegetarian dish is beautifully plated before being finished at the table with hot pumpkin soup. “This dish is a favourite of mine because it defines me as a vegetarian and as a European who has lived in Asia for half my life,” says the chef. 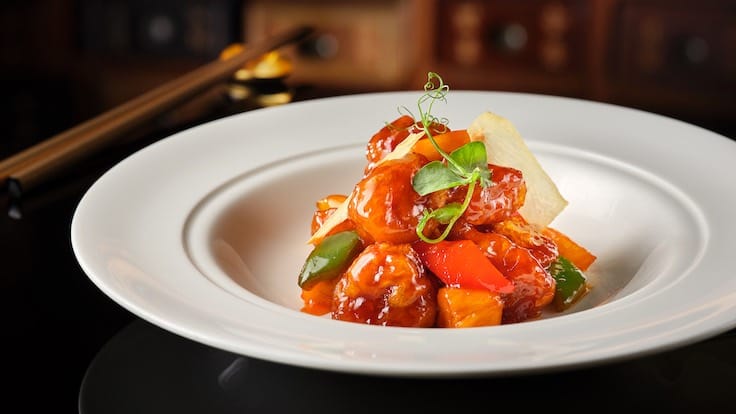 Sweet And Sour Pork With Pineapple
“I knew being in the kitchen was my calling from a young age as it allows me to convey my passion for food while showcasing my culinary skills,” says Macau-born chef Tim Lam. Over the past 24 years, he honed his Cantonese cooking craft in top Chinese restaurants in Hong Kong before relocating to Singapore to helm Cantonese restaurant Jiang-Nan Chun in Four Seasons Singapore. Lam’s philosophy of bringing out the best in seasonal produce manifests in his signature Sweet And Sour Pork, a cornerstone of Cantonese cuisine. His version comprises Spanish Duroc pork cubes deep-fried to give them a wafer-thin crust, before being coated in a tangy orange-red sauce. Shards of house-made candied ginger add a special touch to this dish, and help to round off each bite with a hint of spice and heat. 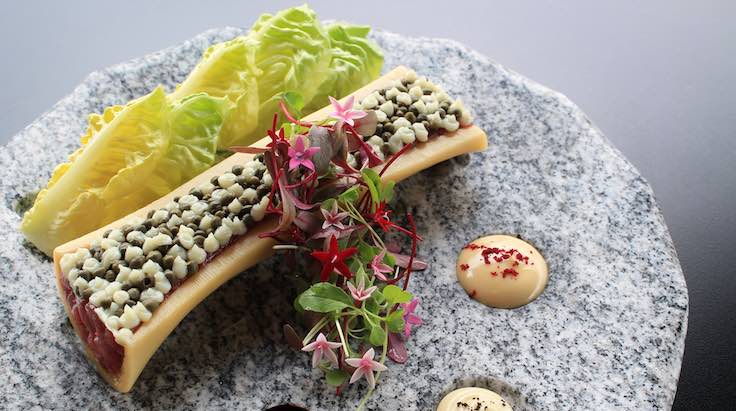 Beef Tartare, Bone Marrow, Beluga Capers
Up on the fifth floor of a charming heritage shophouse overlooking the Singapore River is Braci, a cosy 20-seater restaurant that chef-restaurateur Beppe De Vito calls his culinary playground. The menu here is deeply personal, inspired by the chef’s Italian heritage growing up in Puglia, his Mediterranean roots and his travels through Asia, with an emphasis on ingredient provenance. “Beef tartare is a classic dish, but at Braci, the way we execute it is a reflection of my culinary ethos, which is to respect and fully utilise every single bit of an ingredient and to be efficient and thoughtful. We source for the best quality ingredients and repurpose all the ingredients as much as we can in our menu,” he explains. “In this dish, we use the hollowed-out bone to cradle the beef tartare, presenting it in a more unconventional and innovative fashion. This elevates the aesthetics and is representative of our modern approach to Italian cuisine at Braci." It is topped off with bone marrow and capers for a kiss of creaminess and umami.
Advertisement
Advertisement