Two years ago, chef Shannon Binnie of nature-inspired restaurant The Botanic decided to make the switch to become a vegan. The Australian opted to follow a wholly plant-based diet and tried to go for food options that are made from scratch as much as possible.

He says: “I've always been fond of plant-based dishes since I was young, but the main decision to become a vegan was because I was becoming more conscious about my health. Growing up in Sydney, it was not a stretch to avoid meat and dairy products as the country has a vibrant line-up of eateries that embraces the vegan and vegetarian lifestyle, coupled with an abundance of fresh and natural produce.”

Binnie, who has been working in Singapore since 2011, found it surprisingly easy to convert to veganism here. He shares: “There are plenty of dining options in Singapore that cater to vegan diets, and most casual or local eateries offers at least a few such options on their menus.” 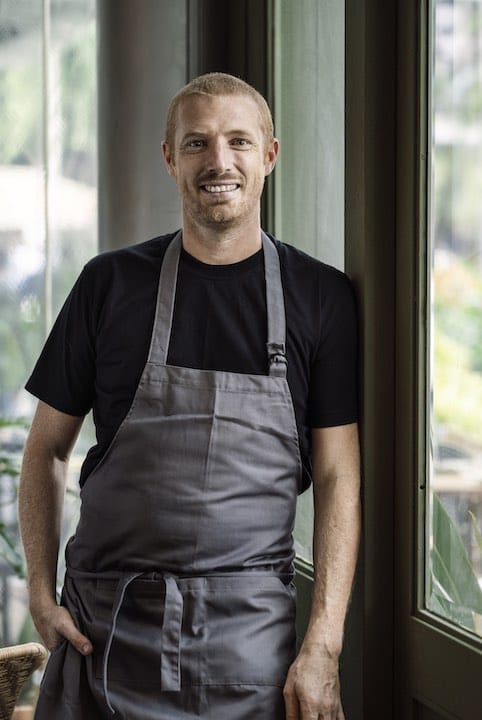 Adopting a vegan lifestyle has helped Binnie (right) to shape his approach to The Botanic, which serves plant-based dishes that are vegan, vegetarian and gluten-free with Asian and Mediterranean influences. The restaurant was transformed from Salt Tapas & Bar following the departure of chef Luke Mangan from Salt last year. Binnie was the executive chef at Salt.

On crafting his dishes, he starts with the product before thinking about how to adopt local flavours, or whether the dish works better as a vegan or vegetarian options.

He adds: “The creations here at The Botanic are designed to be more substantial, fortified with nutrient dense superfoods, whole grains, and punchy sauces and herb oils that pack intense flavours in every bite.”

At home, one of Binnie’s favourite quick-fix dishes to whip up is Kale, Seeds And Grains Salad. For his rendition of the quintessential Aussie-style salad, Binnie adds nuts, lentils and quinoa for a touch of crunchiness. He also sprinkles some pomegranate to inject a dash of sweetness. Instead of serving it raw, Binnie lightly grills the coarse and chewy kale leaves to accentuate its flavour, soften its texture and add a tinge of smokiness of the salad.

Other dishes that he enjoys at home include a vegan version of Vietnamese spring rolls, stuffed with marinated tempeh (fermented soya bean) and tofu, raw greens, mushrooms, sesame tahini and soy dip. He also relishes turning out a vegan pizza made with a sourdough base, home-made cashew mozzarella, verde, romesco, and nutritional yeast, which is a vegan substitute for cheese. Another dish is his wife’s chia seed, cocoa and nut butter brownie with banana and coconut sorbet. He says: “These dishes are easy, quick to make, nutritious, and, most of all, the kids always enjoy them.”
Advertisement
Advertisement 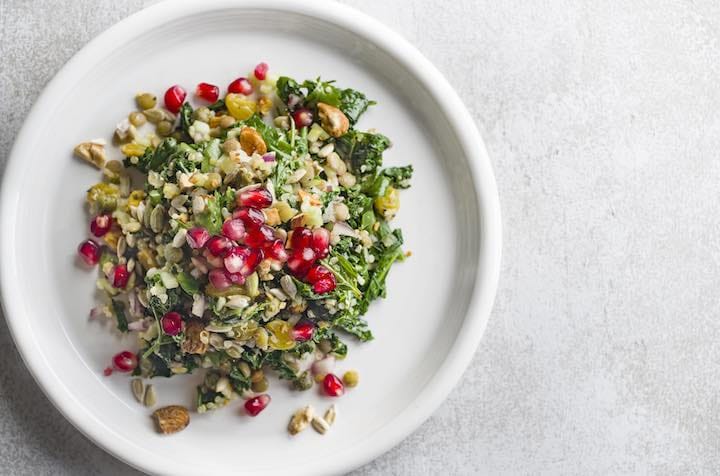 Method
For Citrus Dressing:
1. Whisk the vinegar, lemon juice and salt together in a bowl.
2. Slowly add in the olive pomace oil, mix well and set aside.

Method
For Kale Salad:
1. Mix and toss all the ingredients together in a bowl and add the citrus dressing
2. Serve in a cold bowl

Tip: Chill the ingredients before preparing the dish, which is best eaten immediately after dressing the salad.