Get into meat-free clean eating with a wholesome trio of ingredients from Tibet at the vegetarian restaurant.

A spiritual awakening led Anita Yuan to switch from fixing watches to running a vegetarian restaurant. The owner of Ganglamedo, who converted to Tibetan Buddhism and became a vegetarian two years ago, now serves up organic meat-free dishes.

Yuan was taken by the “intelligence brought from Buddhism”. Formerly a free-thinker, she says in Mandarin: “I saw an almost dead fish being revived and jump suddenly. It also made me realise that every animal life is precious and that we should cherish it. Animals do not deserve to be our food.” It was with this belief that she decided to ventured into a food business that is so closely linked to her beliefs.

At 44-seat Ganglamedo, much of the menu centres around the vegetarian hot pot, in which diners can cook their platter of greens in four types of broths such as white pea, hot and sour, mushroom and tomato. Other dishes include fried spinach pancake, mochi bread with mayonnaise and winter pumpkin cake coated in cereal confetti.

One of Tibet’s most famous exports, the Nagqu cordyceps sinensis, makes an appearance in many of the dishes. The nutritious caterpillar-like herb is cooked in a double-boiled soup, grated over fried rice and made into a sauce that is drizzled over noodles with Chinese truffle. 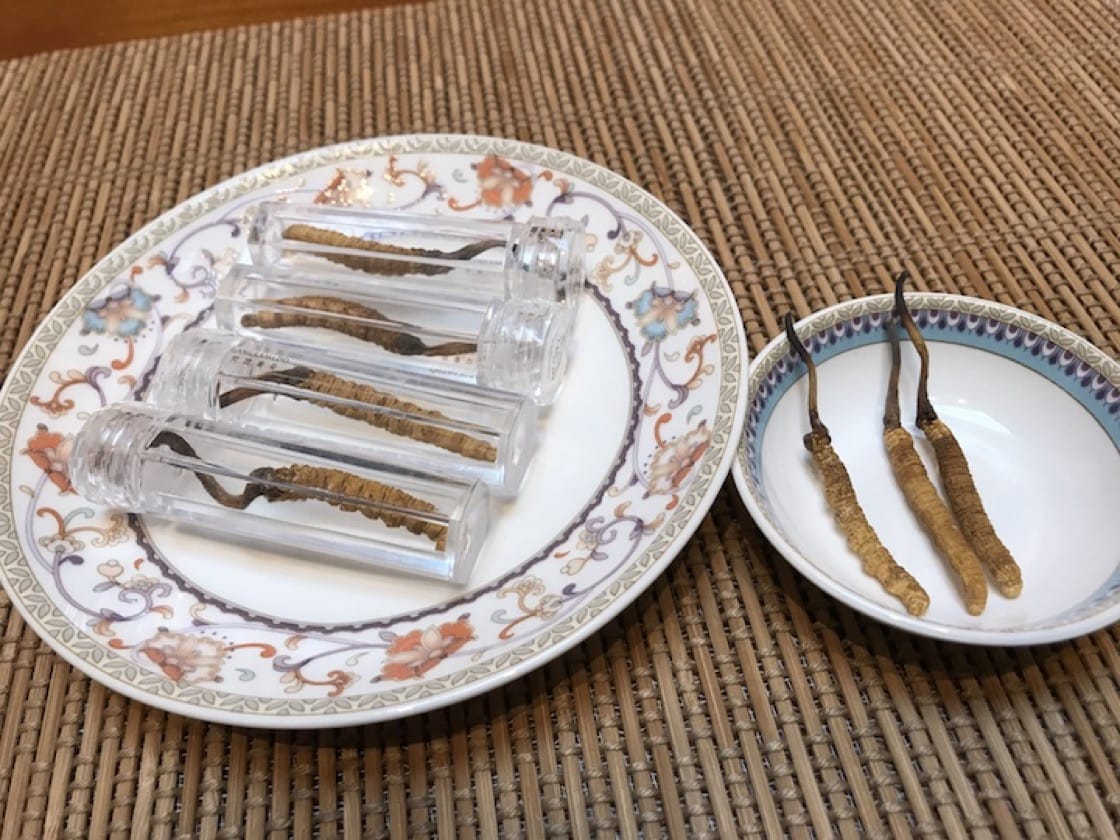 Cordyceps sinensis is known to alleviate conditions such as cancer, high blood pressure and asthma, and boost the immunity system. (Credit: Kenneth Goh)

Cordyceps sinensis, a caterpillar-like medicinal herb, is commonly used in the Traditional Chinese Medicine arena. The nutritious root is known to alleviate conditions such as cancer, high blood pressure and asthma, and boost the immunity system.

Legend has it that Empress Wu Zetian of the Tang Dynasty recovered from her coughing spells after sipping on chicken soup brewed with cordyceps sinensis.

One of the top grades of cordyceps sinensis is grown in the mountainous Nagqu region in Tibet, where the root is grown at 3,000m to 5,000m above sea level. The cordyceps is formed when a fungus in the soil attacks and kills a caterpillar. Nicknamed “soft gold” in Chinese, these prized herbs are harvested three months annually from May to July. The price of the fungus is determined by its size, colour and freshness. The thinner and smaller cordyceps are, the cheaper it gets.

The most common way of consuming cordyceps is grinding the root into a powder and stirring it into hot water. Cordyceps is bitter when consumed on its own, so there are more flavourful ways of consuming the herb. They include boiling it a soup with black truffle, matsutake mushroom and bamboo fungus. The bright orange cordycep flower, which is the fruit of the cultured cordyceps, can also be dry-tossed with carrot, radish and enoki mushrooms as an appetiser. 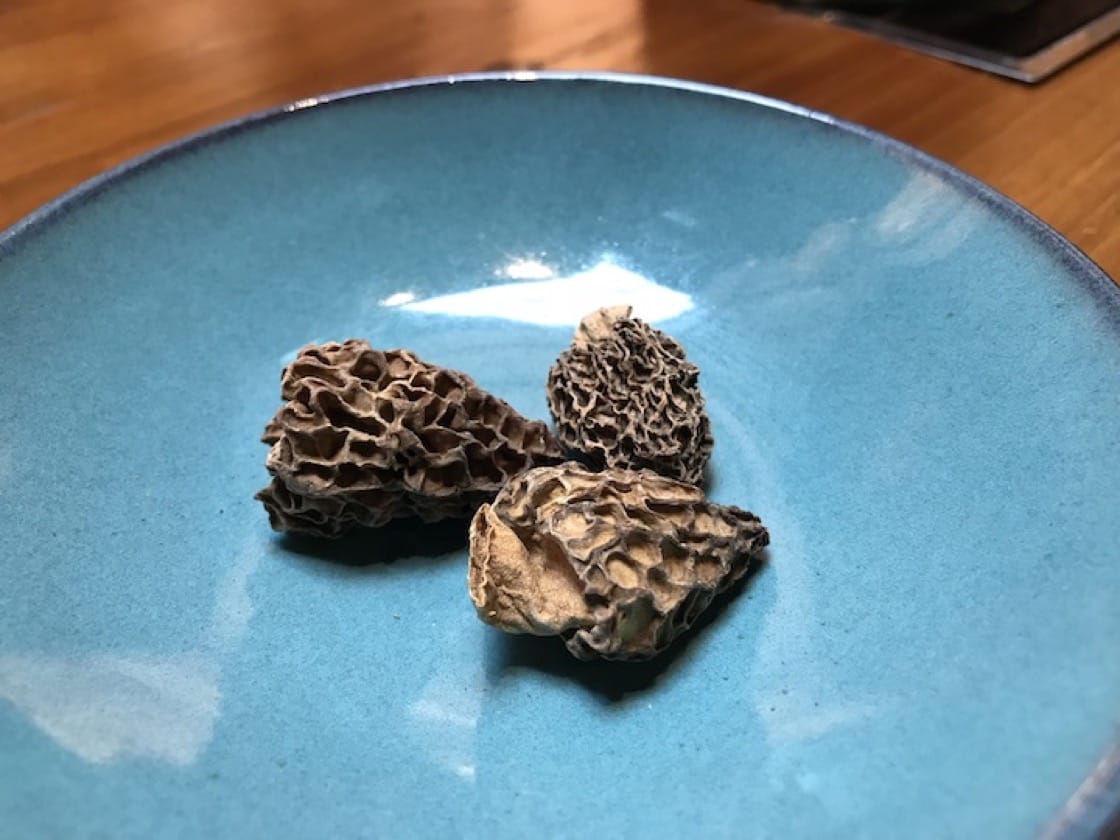 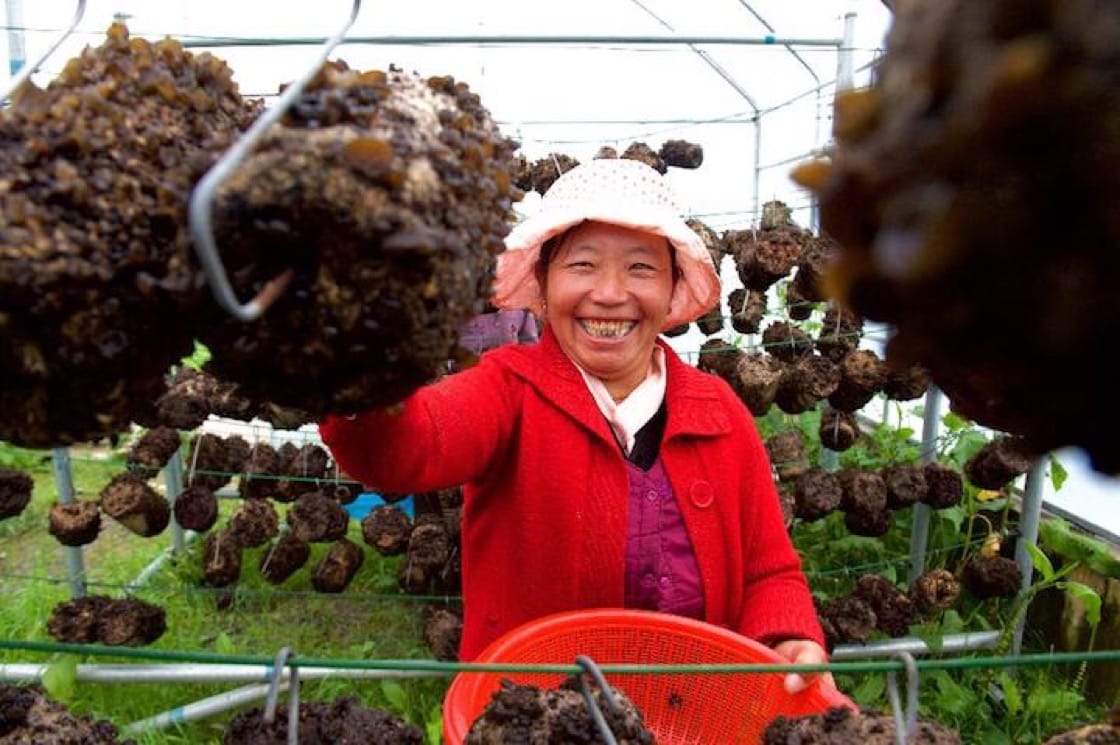 This bowl-shaped fungus gets its name from its birthplace, the dense forests in the highlands of Yadong county at the southern tip of Tibet that borders India and Bhutan. Nicknamed “pearl fungus”, the thick petite shells are thumb-sized and have a smooth and refreshing texture. They aromatic mushrooms are also known for their soft and crunchy texture.