“I love bottling,” Kevin Morrisey says with a smile. “Most of my friends stress out over it, but I enjoy it. There are so many moving parts and stuff is going so fast—there’s an adrenaline rush."

Some of us look at life and see risks, preferring to avoid those risks and play it safe. Others look at life and see challenges, always on the lookout for an opportunity to learn about or try something new. After a decade in the film business, Kevin Morrisey was looking for a career change. Becoming a winemaker doesn’t seem like a natural path for an ex-cameraman, but there are some surprising parallels between winemaking and the film world.

“It’s high pressure,” Kevin explains. “You rely on people and crews and preparation and you have to make the best of situations. Weather is a factor, especially as a cameraman. You have to be organized and able to plan around a lot of things coming together, while still at the mercy of the elements. And as with any production, ultimately you’re making something that you hope will bring pleasure and joy to people.” 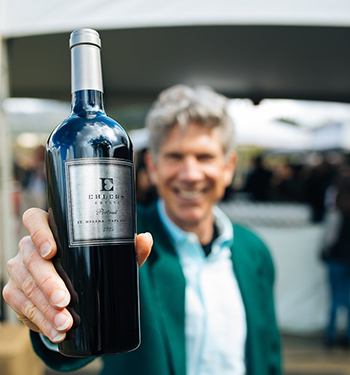 At the age of 35, Kevin decided to apply to UC Davis. “When I changed jobs, I did a lot of research, writing, corresponding. My wife and I took a trip up to Napa and I set up some interviews. We were broke—we camped in a state park while I was interviewing with winemakers.” He was jumping into the unknown with both feet. “It goes back to my nature,” he explains, “always wanting to learn in whatever context I’m in. I feel like I’m always taking a risk—I always seem to be doing something I’ve never done before or don’t know how to do. With winemaking, we’re working with the same vineyards every year, the same terroir, but it’s completely new every time. The grapes are all you’ve got, and you’ve got to make the best wine possible every time. Being in uncharted territory doesn’t bother me.”

While attending Davis, he decided to pursue an internship at Château Petrus. “I was fluent in French. Davis had an official internship, but I wasn’t sure I’d be picked for it and I didn’t want to wait to find out. So I just decided to go to Bordeaux.” He brought his wife Karen along, who picked grapes out in the vineyard while Kevin learned about winemaking. “Being around the fruit in the vineyards at harvest time was really cool. We were drinking Pomerols every day at lunch and dinner—good ones, less good ones, old ones, new ones, barrel samples, single plots—at the end of the day an internship is just grunt work, but it’s what you soak up through your pores and your senses that’s important. I’ve always really enjoyed learning and trying new things, and when I’m around experts, I soak up what they have to say and find little morsels of advice and knowledge.”

This experience in Bordeaux influenced Kevin’s ideas of terroir. “I love pondering terroir,” he says with a smile. “My sense about terroir is that it’s really local. I have a hard time getting my head around a wine if I haven’t been to the place. It’s like meeting somebody with the same accent as you, and just from the sound of their voice, you know they grew up in the same place and went to the same high school. For me, that’s the fun of terroir, that moment of, wow, this tastes like somewhere I’ve been to.” 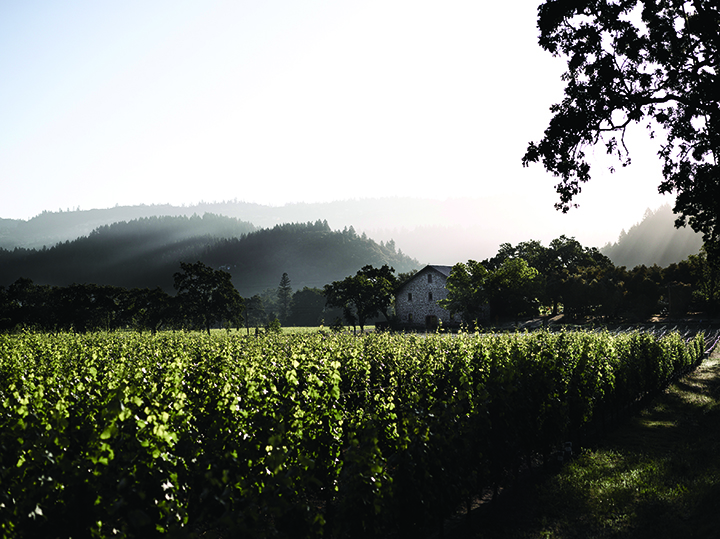 After the internship at Petrus, he returned to Napa where he worked for several years at Stags’ Leap Winery and later, Etude Wines with his mentor Tony Soter, before accepting the winemaker position at Ehlers Estate in 2009. He was attracted to the estate’s farming practices, and the vineyards, which were certified organic in 2008. “It’s a healthier system overall,” Kevin says of farming organically. “The highs and lows aren’t so big. I like to think we are building a healthy system without chemical inputs. Look out to the vineyard: there’s just as much life under the ground [as] above it—farming isn’t just about what’s visible above ground.”

Kevin likens the responsibility of being a winemaker to that of a chef. “I’m making something and I’m asking you to put it in your body,” he says. “That’s an intimate act and it gives me a responsibility. If I’m supercharging what I’m making with all the goodness that I can harness, that will nourish you. Compare that to the angry chef pistol-whipping his employees in the kitchen—is that food going to nourish your soul? Anything you do affects everything else, near and far. If you approach your work that way, you’ll get more out of it and put more into it. I don’t think about it as making better wine; I think of it as a more fulfilling way to approach your work.”

As part of this wholistic approach, the estate commits to a full-time crew, rather than hiring labor at pruning or harvest time. It’s a more expensive way to run a business, but it may be one of the answers to the labor shortage wineries have increasingly faced the last several years, compounded by the rising cost of living in Napa Valley. “Schoolteachers, cops, firemen, librarians—they can’t afford to live in Napa,” Kevin says. “At what point do things tip? We rely so much on hand labor in the wine business. I’m worried about the years when we have a heat wave during harvest. I don’t think we’ve had the big test yet. If we are maxed out on labor year-round, and we have an event like a heatwave that forces the need for labor, people won’t be ready for it.”

They say there’s no reward without risk, and Kevin encourages others who are passionate about winemaking to follow the path. “Follow your bliss and chase after your dreams,” he says. “Being on the treadmill working for the man . . . ,” he shakes his head. “You’ve got to find the work that makes you happy. Go for it but do it for the reasons that drive you.” As for Kevin, he’s seen the reward. “When I was at Davis, I was fired up. I was a full-time student but worried about being able to find work. I was prepared for failure and knew that there might not be a pot of gold at the end of this rainbow. But I got exactly the opposite.”