Winemaker Jean Hoefliger on the Interaction of Multitudes

At Alpha Omega, Hoefliger is given carte blanche as winemaker.

Wine is diverse—it’s why we love it so. It encompasses concepts that otherwise seem worlds apart: business, art and science among a myriad of others. Winemakers use art and science to make wines but maintain an eye for the bottom line. Jean Hoefliger, who planned for a career in international finance before beginning in wine, has been described as “part artist, part mad scientist,” and is the embodiment of a winemaker who exists in the space between the business, science and art of winemaking.

Hoefliger has worked the world over, beginning at his godfather’s estate in Switzerland; at Château Lynch-Bages and Château Carbonnieux in Bordeaux; Meerlust in South Africa; Hartford Court in Sonoma and Newton in Napa. He currently oversees 18 projects as winemaker or winemaking consultant in several countries including the U.S., Italy, France and Spain. In California alone, he works for a multitude of wineries including the new AXR Napa Valley in St. Helena, The Debate, Clark Claudon, MR (Michel Rolland’s first Napa Valley wine), and Alpha Omega, where he has worked as winemaker since its opening in 2006.

“In the beginning, working on multiple projects was mainly a way to work faster,” he explains, as we discuss his career in his Alpha Omega office. “I could follow the vegetative cycle of the plant with multiple sites, equations and variables. You can learn more by following the cycle this way.” Over the years, he has been able to apply lessons learned from one country to another—like using knowledge of the low-pH, slatey soils of Priorat to maintain acidity in his Napa Valley wines.

Is it possible, working on so many projects, to have one overarching philosophy of winemaking? “A winemaker who says ‘always’ is a stupid winemaker,” Hoefliger tells me. “My role is purely to translate the site with my philosophy, which is: who do I make wine for?” Here the intersection of art and business becomes apparent. “We never have the power to erase the characteristics of an appellation or terroir, and that’s the greatness of wine. But when you’re making large amounts of wine, you have to accommodate your customers’ tastes. When I worked at Newton, I was aware that most people drink the wines within 48 hours of purchasing them. I have to accommodate that. I don’t take the same risks with larger projects that I do with smaller ones. With smaller projects, you can play with the variations. So you have to adapt.” 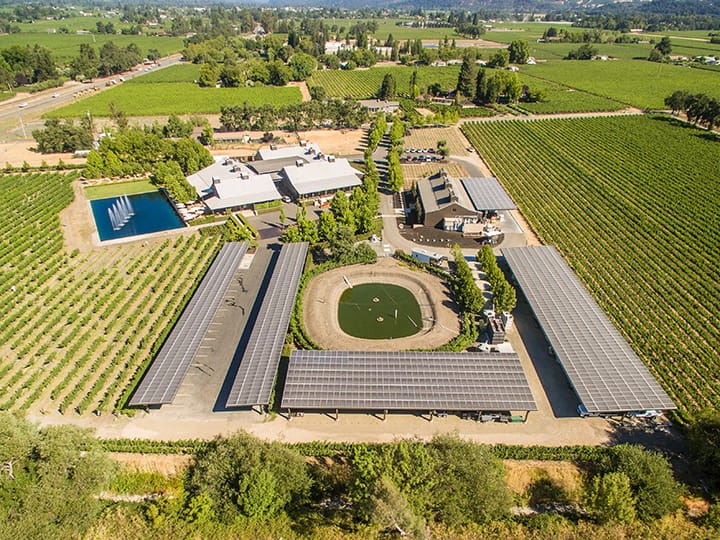 Alpha Omega from above. (Photo by Bob McClenahan.)

At Alpha Omega, Hoefliger is given carte blanche as winemaker. “One of the greatest things that ever happened to me was being given complete freedom here,” he says. “It’s amazing to be given every tool you need to express your art.” At Alpha Omega, he takes a high-risk approach to making wine, fermenting in barrel with indigenous yeasts, keeping the wines on their skins for up to 120 days. “Labor-wise, we are working with 1,000 barrels that need four punch-downs per day. That’s a lot of labor and potential problems,” he said. “There’s a risk factor involved. If a winery is producing a large volume, I would never take that risk. But at a smaller volume, I do, and should, take that risk.”

“My motto in life is that without struggle, there’s no glory,” he continues. “I don’t want to make wine like everyone else. Wine is diverse, and that diversity should be maximized and expressed—that’s the difference between art and manufacturing.” Hoefliger explains the intersection of science and art through the act of blending. “Decisions need to be made by a nose and a palate, because that’s where the wine ends up. You can’t apply a recipe because when you do that, it becomes manufacturing and not art. For me, manufacturing and reproducing takes away the ability to adapt, which is a winemaker’s job—to adapt to what nature throws. Science can confirm things, but the only way to adapt is to smell, feel and taste.” 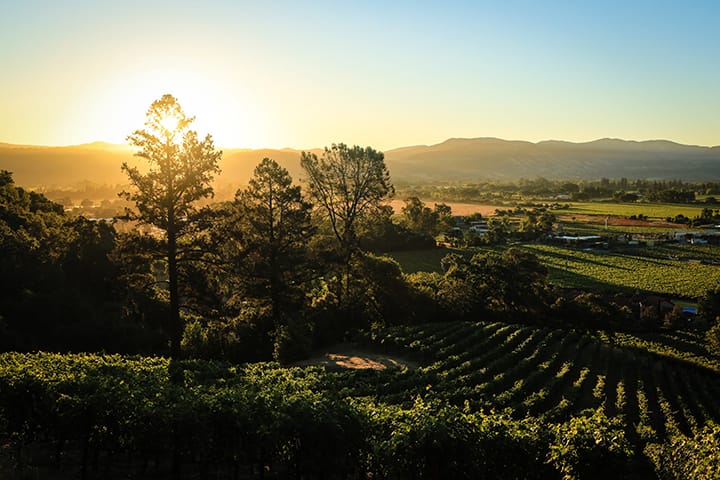 The nose and palate aren’t the only ways for a winemaker to adapt, and one needs tools to be successful when working on so many projects at once. Teams are imperative. “Trust and heart is key in a team,” Hoefliger says. “The important thing is to surround yourself with people you trust and believe in, and that takes time and relationships. Rome—and marriages—wasn’t built in a day. My philosophy of life is that it’s about people, and success is built on your relationships with people.”

Michel Rolland has become an important relationship for Hoefliger. The two met when Hoefliger worked at Newton, and they have been friends ever since. Michel currently consults for Alpha Omega, coming in to taste the wines and assist with blending. “Michel is a doubter,” Hoefliger says. “Other consultants I was exposed to in the past would always tell me the wines were great. But Michel won’t sugarcoat it. He will tell me from an outside perspective what a wine needs. We grow much more from criticism than from praise.”

While science can confirm the physical aspects of a blend and provide analytics, Hoefliger points out that blending is still an art. “I learned to blend through time, experience, guts and passion. You don’t learn this at school. It’s a touch and a feel and that’s a true form of art, that’s not science. I blend every wine several times over the course of its life because I’m always trying to find the crack to fill it up,” he explains. “I blend purely on structure, and it’s like sculpture. You are constantly readjusting and at some point you just have to let it go.” 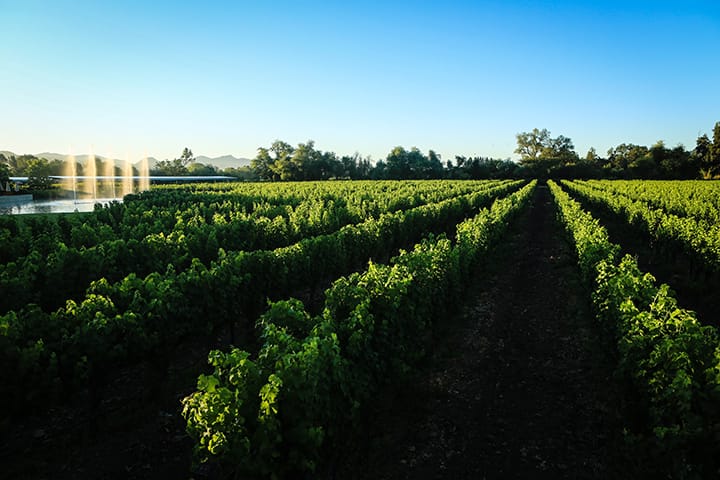 1155 Vineyard gets its name from the street number of Alpha Omega winery. (Photo by Mary Steinbacher Photography.)

Is there one definition of great wine? Again, science, business and art intersect. A winemaker can be an artist, or a scientist, but they must still acquiesce to the demands of consumers—wine is a business. This is apparent in the notion that wines, especially Cabernet Sauvignon, must be approachable straight out of the gate and have the ability to age for several decades. Hoefliger believes that the legacy of Napa Valley will be established by using both science and art. “We know these wines can age extremely well,” he says. “Napa Valley will be measured through time and so we need to make wines that can age. The beauty of a winemaker is they widen the drinkability of a wine. We can’t make wine that’s only drinkable early on or that’s only good in 25 years. Reaching a level of wine that will satisfy people early on but not take away drinkability—we have the tools to do this.”

“One of the greatest risks of the modern knowledge of science is to forget the art,” he tells me. “Wine is structural and aromatic. If you cannot taste multiple aromas and textures, it’s a problem. The interaction of multitudes is much more interesting. I fell in love with that depth—the depth of the spectrum and the endless possibilities of the equation.”