40 Years of Growing Grapes and Making Wine with Tom Farella

With four decades of experience growing grapes on a single piece of land in Napa Valley, Tom is in a unique position to speak about the changes he’s witnessed since the beginning of the modern era of winemaking in the valley in the early 1970s.

“It was always about preserving the place,” Tom Farella says as we discuss the history of his family’s vineyard and winery in the Coombsville AVA. His father, Frank, a graduate of Stanford Law School and a successful attorney, had a longtime dream of owning land and planting grapes. “He always had this jonesing to be outside, and I did too. We’d go out on weekends cruising around on a ranch in Marin, shooting .22s. We’d go backpacking and skiing in Tahoe. It was a real profound love of nature.” Having grown up in an Italian family that owned a raisin vineyard, Frank had an interest in wine. “My dad had some Gallo Hearty Burgundy in the house,” Tom says. “Later, when he was making more money, he’d buy Beaulieu Vineyard Private Reserve for $3.50 a bottle and stockpile verticals of it. As he became more and more successful, we drank better and better wine.” 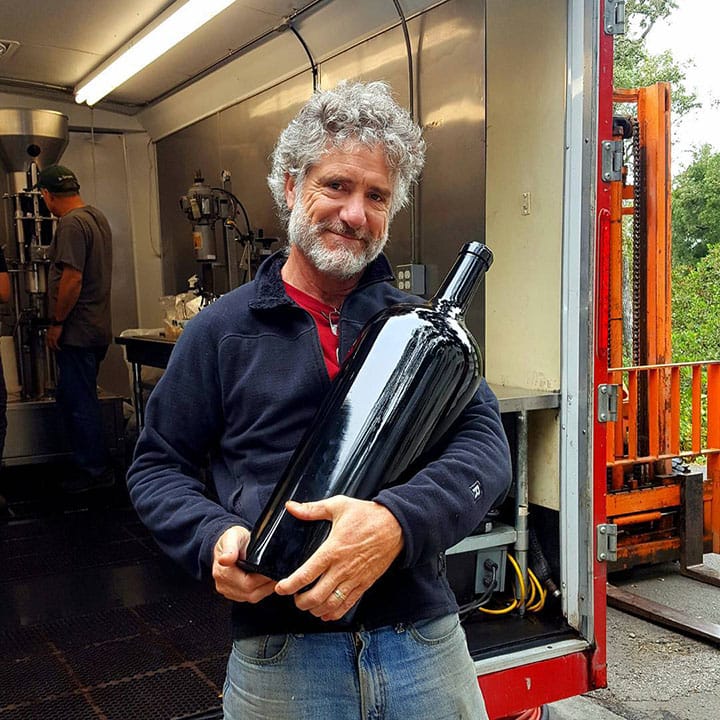 Tom Farella has seen the advent and proliferation of the appellation system in the U.S., the perils (and hidden advantages) of phylloxera, and the rise of Cabernet Sauvignon as king of Napa Valley.

In 1977, Frank purchased property in what would later become the Coombsville AVA. “It was 56 acres at the time, in an area most people didn’t consider grape-growing friendly,” Tom recalls. Vines were planted—Merlot, Sauvignon Blanc and Chardonnay—and the first wines were made in 1985, shortly after Tom graduated from UC Davis with a degree in Viticulture and Enology. “My career path and my dad’s acquisition of this property were exactly in sync,” Tom explains. “In 1983 I graduated and was hired at Preston in Sonoma as an assistant winemaker.” Tom gained experience, working at Neyers and Flora Springs in Napa, Ponzi and Beaux Frères in Oregon and Domaine Jacques Prieur in Meursault. At the same time, he advised his father on the winemaking back home. “Those first years it was my dad, his wife, myself and a friend doing all the work while I was at Preston. My dad would call every 20 minutes and ask, 'What do I do next?' I wanted to help my dad foster his dream as repayment for my education at Davis.”

With four decades of experience growing grapes on a single piece of land in Napa Valley, Tom is in a unique position to speak about the history of Napa and the changes he’s witnessed since the beginning of the modern era of winemaking in the valley in the early 1970s. He’s seen the advent and proliferation of the appellation system in the U.S., the perils (and hidden advantages) of phylloxera, and the rise of Cabernet Sauvignon as king of Napa Valley.

“Back in those days, Napa Cabernet Sauvignons were not very yummy,” he remembers. “They were undrinkable to me. They tasted like bell pepper and tar and were angular. Chardonnay, Chenin Blanc, Gewürztraminer, Riesling—these were all commonly planted grapes up and down the valley in the early days.”

In the late 1980s and early 1990s, dramatic changes in the viticultural landscape took place. This was the period when wine critics and wine publications became popular—wine moved into the American mainstream consciousness. The French Paradox—a concept that the French, who consumed high amounts of fat, had lower risk of cardiovascular disease—was popularized by a documentary on 60 Minutes. “People said, why can the French eat two pounds of butter a day and have the lowest incidence of heart disease?” Tom says. “After this, red wine became healthy.” 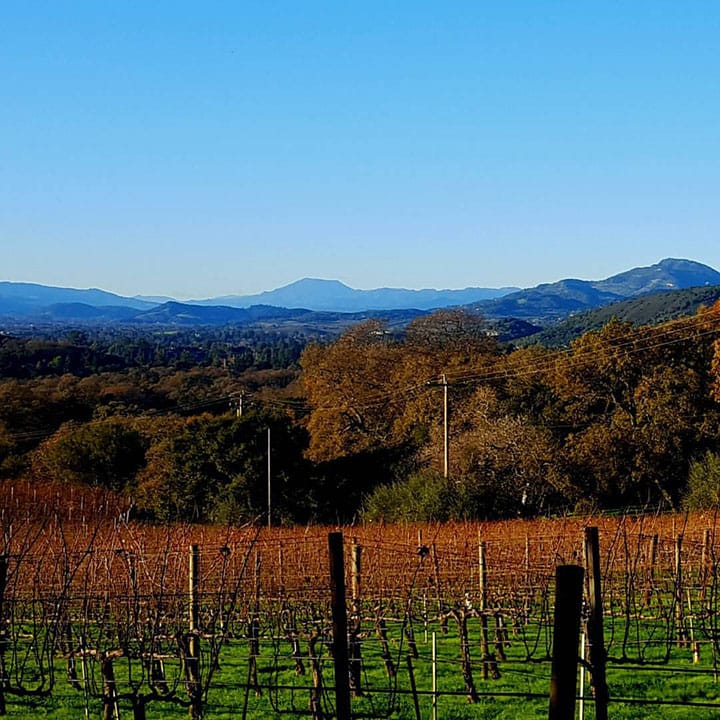 Phylloxera also had a profound impact on the wine landscape of Napa at the time. At the advice of UC Davis, many growers had planted vines on AxR-1 rootstock, which was later discovered to be susceptible to the root louse. Many of the valley’s vines had to be torn out and replanted. “In the French Paradox environment, what did you replant?” Tom asks. “Reds. Cabernet Sauvignon. Growers were learning about canopy management, better clones and rootstocks. Viticultural science had reached a new level and phylloxera forced our hands. All those nasty angular Cabs were gone. All these things converged together into a global awakening of what Napa was.”

Today, Farella Vineyard is planted with Cabernet Sauvignon, Merlot, Syrah, Chardonnay and Sauvignon Blanc. After the rise of Cabernet Sauvignon, winemakers in Napa faced new challenges. “There was this thing that was irresistible,” Tom recalls of the early 2000s. “Let the fruit hang. We have three more weeks of sunshine and great weather. The temptation is thrilling.” But Tom wanted to make wines that would age well in bottle, which requires a wine with plenty of acidity, tannin and fruit. “What defines ripeness?”

“Sometimes you have to remind yourself what you’re doing and why you’re doing it,” Tom explains. “You can’t age a wine without acidity. Yet on the flip side, you can’t make a yummy wine that’s too acidic. How do you walk that line? And how can I make wines that are ready, delicious and drinkable when young and yet are still age-worthy. That’s a challenge.” Wine is, of course, a business. “Winemakers need money,” he says. “You’ve got to play the game. Fortunately for me, we have the cushion of being an estate vineyard. My dad never pushed me—we’ve always made wine that we like to drink.” 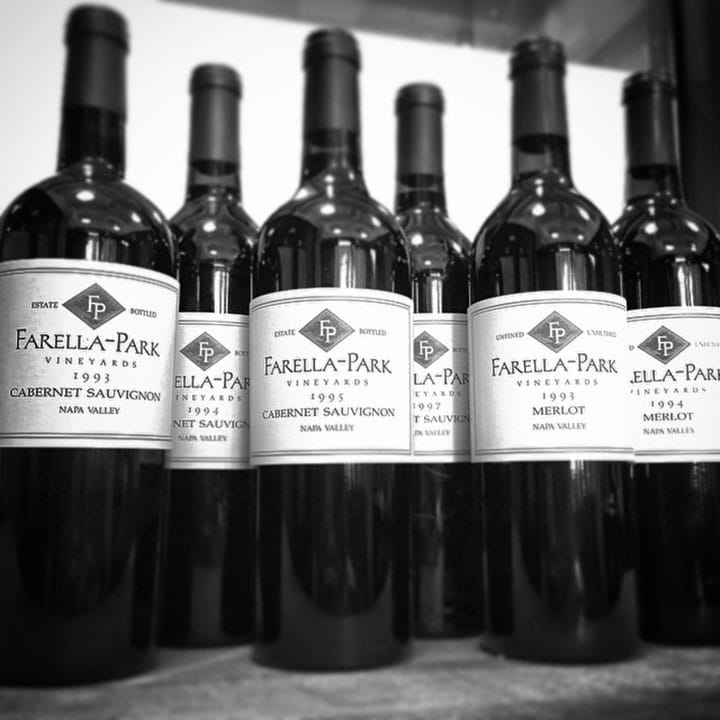 Today, Tom sells about 80% of the fruit from Farella Vineyard to more than a dozen revered wineries in Napa, using the rest to produce about 2,000 cases of wine for his own brand, Farella. Tom has the freedom to farm the way he wants, describing his philosophy regarding sustainability as “minimum inputs with maximum outputs.” He points out that organic and biodynamic farming often involves a high degree of inputs. “If you’re farming organically, you’re using way more diesel fuel [with increased] passes through the vineyards with tractors, and sustainability actually goes down. It results in more air pollution, soil compaction, etc.—it’s a really complex problem. But there’s no escaping the fact that we are all using modern technology. You can’t be a Luddite about it.”

His approach is reminiscent of the French lutte raisonée, a sort of common sense method that calls for inputs (and chemical sprays) only when necessary. “A little bit of Roundup sprayed from an ATV at the right time is a very low impact process,” Tom explains. “People have a visceral reaction to the word Roundup, but they’re driving cars, using heaters, etc. We have to be careful not to be hypocrites. The unintended consequences of organic farming creates far more inputs and now you’re moving back in the other direction. If you want to be the best planetary steward, keeping those tools in mind, whether they’re chemical or not, could be a far better path to your goal, which for me is using minimum inputs while maximizing what I get from the vineyard.”

After 40 years of making wine in Coombsville, Tom has concluded that less is more. “I’ve always been of the mind that the less we do, the better. The same exact philosophy applies to winemaking. As I see it, winemaking is stewardship of the grapes. As a winemaker, if you believe in terroir, you have to understand what your grapes will optimally produce and maximize that potential, versus inserting yourself as the winemaker. The best winemakers have an anthropomorphic relationship with their vines. You go out there and feel their presence, you feel yourself talking to them. You’re more of a vigneron. It’s a tough thing to do in Napa—the business here is so stratified, with viticulturalists, crew chiefs, owners, PR people, a winemaker. For me, it’s more like being in my backyard. That self-contained system is really the ideal.”