Michelin Star Chicago First Day I Got My Stars

When one thinks of Filipino food, there isn’t a single word to describe it. Some say it’s heavy on the sauce, while others say that it is a cuisine that’s best enjoyed with heaping mounds of steamed rice. For Filipinos, food is a symbol of togetherness; a gathering of sorts. Kasama in Tagalog (a Filipino dialect) translates to “together” in English, and it is this ethos of coming together that the world’s first MICHELIN-Starred Filipino restaurant stands by.

“The Filipino culture is such a proud one, and we are so proud of our food.”

“The memories of Filipino food always allude to something that your mother made and your grandmother made…it’s always changing. The most difficult challenge for us was trying to keep its roots and familiar flavours,” says Tim Flores, chef-owner of Kasama. “Our biggest goal was to make Filipino food more accessible to people that have never had it before. Since we do breakfast, lunch, and dinner, it kind of helped us become a little more relatable; our diners ease into the experience whether they come in during different times of the day.” 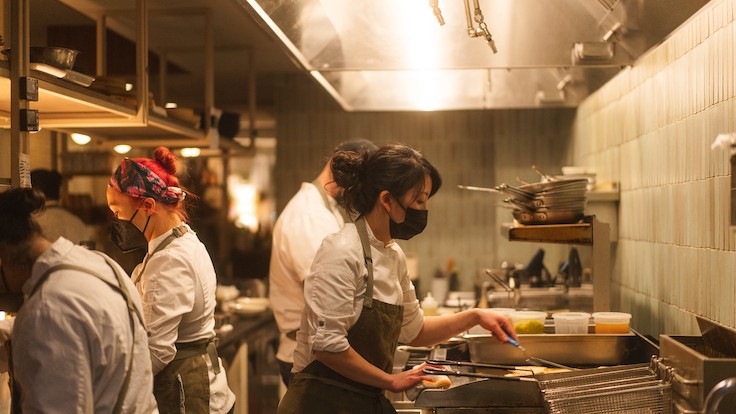 “We named the restaurant Kasama because, apart from myself and my wife Genie [Kwon] combining forces into running this restaurant, we also combined the concepts we wanted to do,” says Flores. “We wanted to do Filipino food, and she wanted to do French pastries. And so Kasama, meaning 'together' in Tagalog, made sense for us. It was just fitting, and it made so much sense to use the word.” 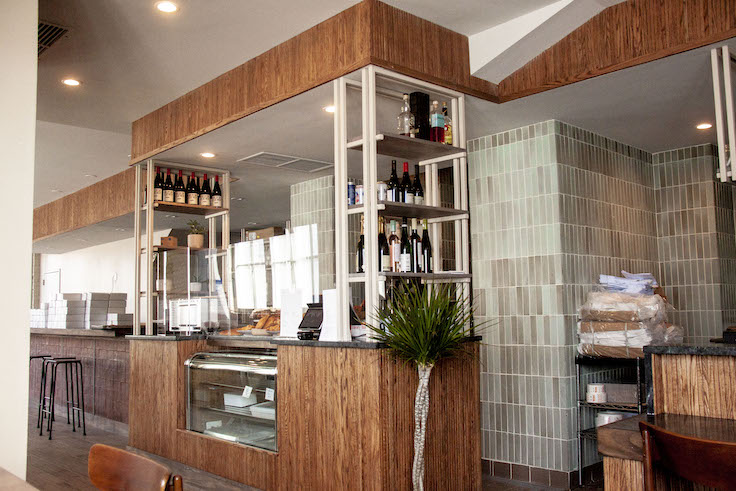 Together in the Kitchen

Flores grew up in Chicago with his mother hailing from Imus, Cavite, in the Philippines. Kwon, on the other hand, is Korean and was born in New Orleans. The two first met at Bib Gourmand restaurant GT Fish & Oyster, also in Chicago. “He was leaving as I was starting. So we didn't overlap for very long. But I actually went to eat at the restaurant that he was working at afterwards, and I had one of the best experiences of my life at a tasting menu. And after that we started talking and hanging out, and eventually started dating,” recalls Kwon about how she and Flores met. 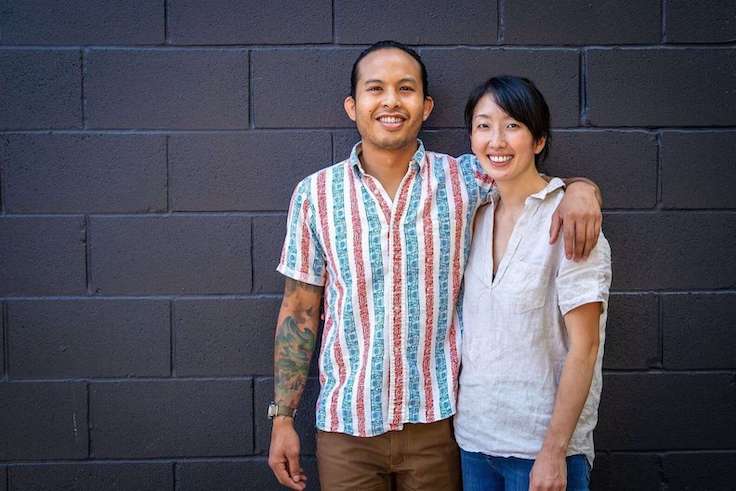 Husband and wife Tim Flores and Genie Kwon are partners inside and outside of the kitchen. (Photo: Garrett Sweet)

When asked what Kwon’s favourite Filipino dish is, she excitedly says, “Nilaga!” Nilaga is a boiled beef stew, similar to Korea’s very own galbi tang. “I also love Tim’s mother's pancit (stir-fried noodles) and lumpia (similar to an egg roll), which bring me back to my childhood. My own mother would make soups along those lines when I was growing up, so it wasn’t a stretch for me to enjoy,” she says. 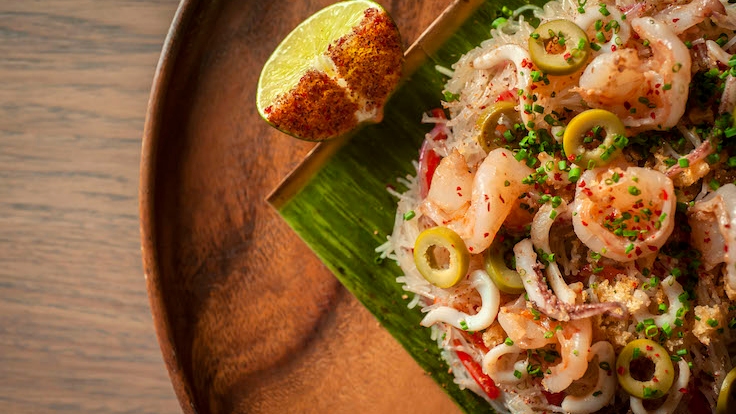 The pancit at Kasama (Photo: Kasama)

Filipino recipes also take roots from a family member, may it be a mother or a grandmother. “My mother is an amazing cook. She's always been the person at family parties where everybody looked forward to her food. They always praise her cooking, especially her pancit, arroz caldo (chicken porridge), and mami soup (noodle soup),” says Flores.

The word kasama also means "partner", and as partners, Flores and Kwon say that they have spent every minute of the day together, for the past five years. “We live and work together,” adds Flores. “We’re here at Kasama 24/7, and we balance each other out for sure. Tim’s an idealist, an optimistic person; whereas I am a catastrophist,” laughs Kwon. “He’s all about the little details, and I’m all about the bigger picture, so it’s nice to have that sounding board and that encouragement, knowing that somebody isn’t going to give up on you. We’ve definitely seen our highest highs and lowest lows, and we’re still together,” says Kwon. 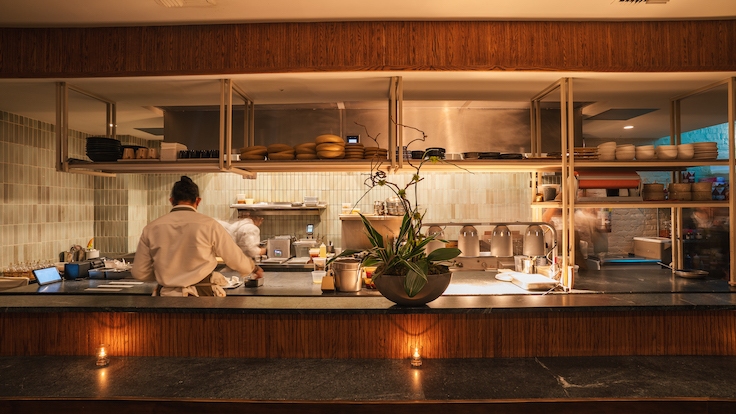 “We try to make each other better,” says Flores. “And even if we get into an argument at work, we leave it here at the end of the day. You have to be able to leave it behind, especially for us because we’re partners both inside and outside of work.”

Putting Filipino Food on the Map

Kasama is the world’s first MICHELIN-Starred Filipino restaurant, and when asked about the recognition, Kwon shares that it was “a flood of emotions.” “We felt a lot of pride and relief,” says Kwon. “And we can start to think about something beyond the day-to-day. For the last two years, it's been one day at a time. I feel like it just gave us hope to think more towards the future. We're just so happy that our team was recognised for all the hard work they’ve done.”

Flores proudly adds: “And I believe that now, the rise of Filipino food is really beginning. You're seeing a lot of chefs across the United States and all over the world just doing modern takes on some Filipino dish. I believe it's an outcome of the generation.” 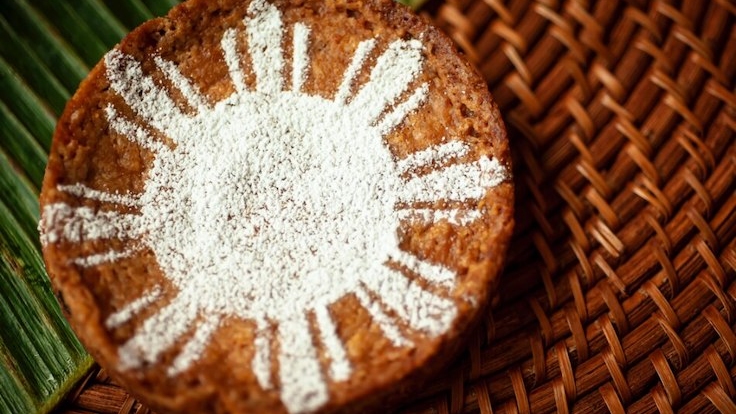 With Kwon’s expertise as a pastry chef, she says that they make a Basque cake, which is a buttery pound cake that’s traditionally filled with pastry cream. At Kasama, the pastry cream is swapped for ube (purple yam) pastry cream and huckleberries, dusted with powdered sugar in the shape of the sun from the Philippine flag. “It’s our best-selling pastry,” she adds.

For Flores, Filipino food was not something he initially thought of doing. “When I started thinking about what I really wanted to do, and what concept we wanted to do, I asked myself, ‘Why would I do anything else other than cook the food that I grew up eating?' So I took the techniques I learned and used them to elevate Filipino cuisine — the cuisine I knew best, and the food I grew up eating. This propelled me and motivated me to cook Filipino food and make it more accessible,” shares Flores.

“And this is an example of how people always relate to Filipino culture through the food. Because of this, our goal became to popularise Filipino food, show people what Filipino food is, and give people the chance to try it.”

Flores says that when he explains Filipino food to first-time diners of the cuisine, he explains the influences that are in it such as Chinese and Spanish. “Filipino food also reminds me of Puerto Rican food or Cuban food…even Mexican food, where you have indigenous culture with Spanish influence.” 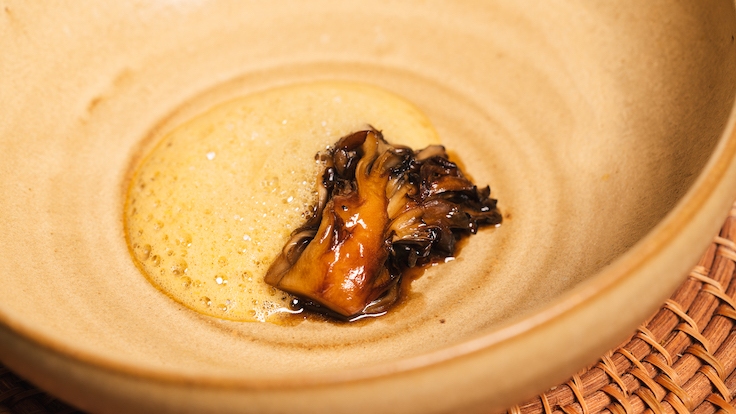 “The format of Filipino food in our menu is that we combine different techniques to make sure that each course doesn’t feel like a stew or a soup. So, for example, in our mushroom adobo dish, we take mushrooms and roast them in a chicken jus that we reduce, and then season the mushrooms like you would chicken adobo,” explains Flores. “And then, we make a mussel sauce. We take mussels and cook them down with vinegar, make an emulsion, and serve it as a foam on the plate. We give these flavours a different texture and a different look.”

Another popular item on the Kasama menu, according to Flores and Kwon, is the kare-kare, which is a peanut-based stew cooked with oxtail. Traditionally having a soupy base, Flores says that Kasama’s version uses a peanut purée that goes on top of a protein, like a lamb belly.

“I love exploring where influences come from and where components come from,” says Flores. “Whether it’s Spain or China, or other parts of Southeast Asia, we try to put a Filipino touch to everything, like our bagoong (shrimp paste) XO sauce, which also uses Serrano ham that’s cooked down. The result is a bursting blend of different umami flavours.” 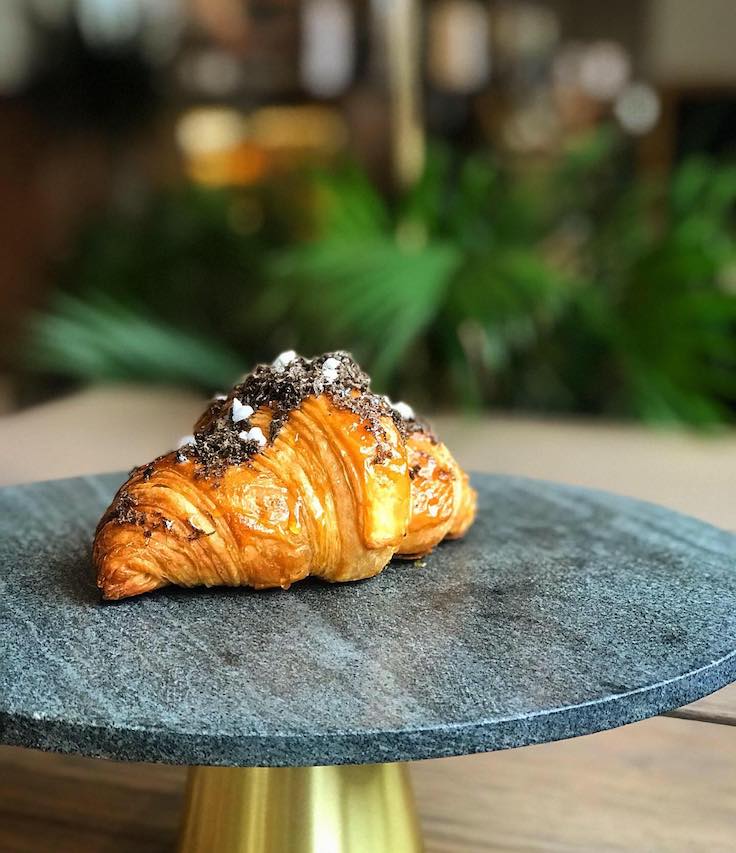 For dessert, Kwon talks about a laminated pastry to highlight Kasama’s bakery aspect, too. “We do a truffle croissant in the restaurant, and we also have a Banana-Cue (a caramelised banana street food) version of it and a Halo-Halo (mixed shave ice), where we use Tim’s mother's leche flan recipe and serve it with pandan ice cream. We also have an Asian pear granita that we top with pinipig (puffed rice) to cleanse the palate. And then, we do the Ube Basque Cake for our guests to take home.”

What’s next for Kasama? Flores says, “I would like to grow. For example, I love being able to provide a good breakfast spot for people. It’s not it's not easy making breakfast, but I love to give that opportunity for somebody to come in in the morning and experience a Filipino-style breakfast. I feel like it may be something Chicago needs,” he says. 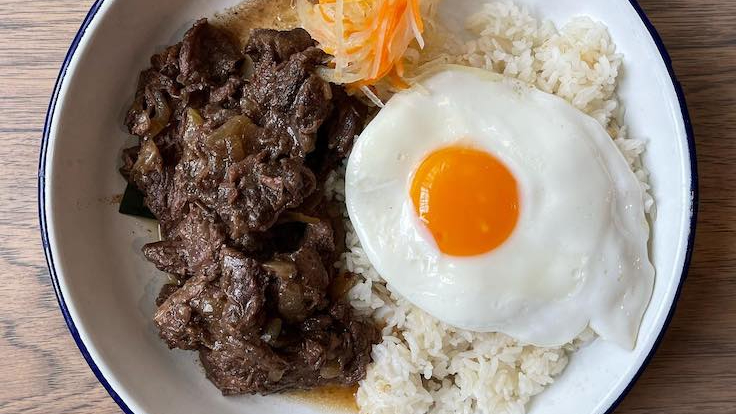 Kwon adds: “The best part of our job is that we get to see people, and we get to cook for them. And, it’s crazy because so many people have gotten emotional. We ourselves get emotional, especially with our regulars who have seen every iteration of this restaurant.”

“We simply love what we do. Personally, I love cooking for people, I love giving to people. It’s a privilege to be able to do so.”

“I say it’s a privilege to be able to cook for a living, which is something we enjoy, versus our parents who took jobs to put us through school or whatever they could for family,” says Flores. “Now, not only do we have the opportunity to make a living for ourselves, but it is also a career path we enjoy. I don’t think that’s an opportunity that everybody gets. We're just trying to provide the best experience that people feel is worth their time and value. I am happy, knowing that I am able to do this."