Sushi chef Hiroyuki Sato, who serves only six customers from behind his sushi counter at Hakkoku, has no intention of branching out and only desires to pass on his craft.

As a child, Hiroyuki Sato did not fancy sushi — even though his father owned a sushi restaurant.

“I didn’t have fond memories of sushi when I was a child. I didn’t like sushi. Why? I remember we had to bring our own bento during excursions. Mine was usually sushi rolls, while others had sandwiches or other bento norms. My bento was always different from the others and I felt bad about it.”

These days, however, Sato has found fame as a sushi chef who pushes the envelope. Not content with introducing the art of sushi from behind the counter of his restaurant, Hakkoku, he also spends time travelling the world and has participated in chef pop-ups in San Francisco, Macau, Taiwan, Indonesia, Thailand, Denmark, Paris and Spain. In his kitchen, Sato unconventionally has had a female chef and a foreigner to assist him. 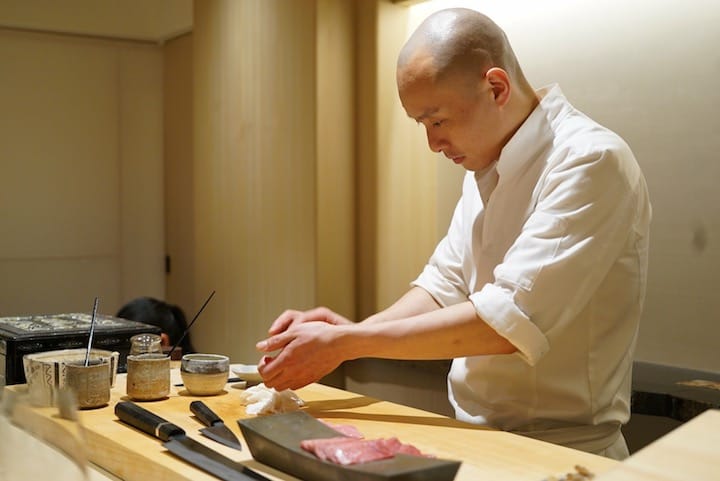 But the up-and-coming sushi chef started out 20 years ago as a waiter simply because “I loved interacting with people. But 15 to 20 years ago in Japan, there was not much prospects in being a waiter, so I thought of what I could do. At that time, my father owned a sushi restaurant. Sushi is Japanese and it still gave me opportunity to interact with customers directly. Moreover, I could learn to cook.”

He toyed with the idea of becoming a sushi chef, worked his way up and has never looked back since.

Along the way, Sato, 40, became an alumni of Sushi Tokami, one of the best sushiyas in Japan. In his time there, he helped the restaurant clinch Michelin stars. He also worked his magic on the suppliers in Tsukiji. 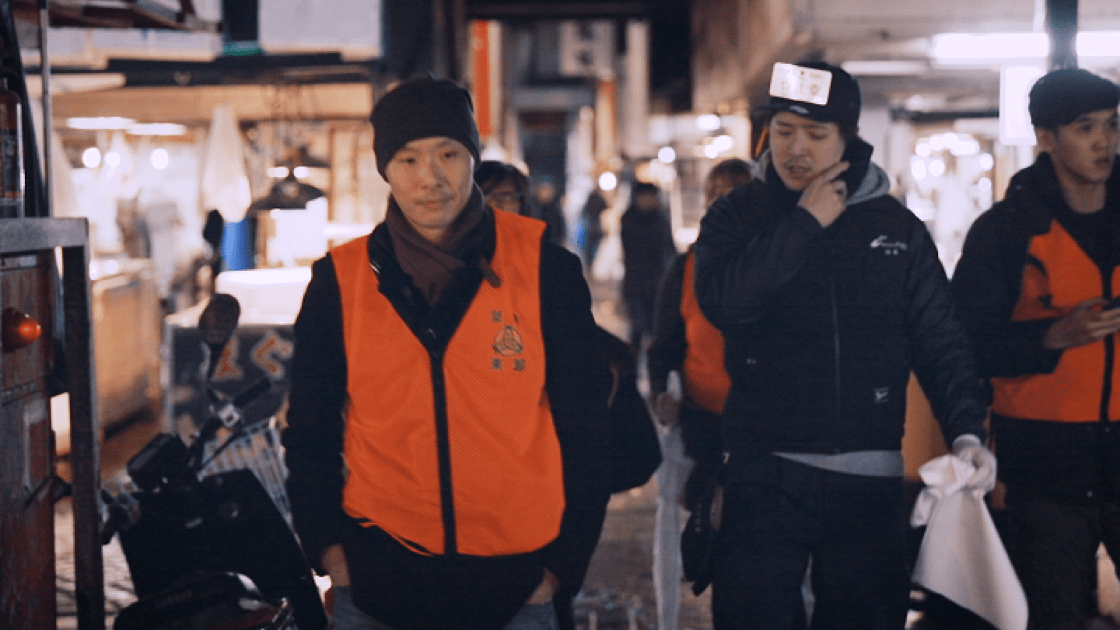 Hiroyuki Sato at the Tsukiji market.

“The tuna suppliers are as important as the chefs. They make the purchase and provide the tuna for the restaurants. We, as chefs, buy the tuna from the suppliers and provide it for the customers. This relationship is important. If they do not work hard, we will not be able to do our job well,” he explains.

“Whenever I was in Japan, I would make sure to make a visit to the market. I did not buy fish, but I visited all the suppliers and greeted them. It was tough and there was no practical meaning in going since I was not buying, but it was our job and there was the connection. For about 15 years, everyone at Tsukiji knew about Sato, who was always idling in the market, and thus over the years, I was gradually recognised among all the people here.”

Sato gets his tuna from the Yamayuki Group, one of the most prominent suppliers in the trade and the same one who sends tuna to three-michelin-starred Sushi Saito. 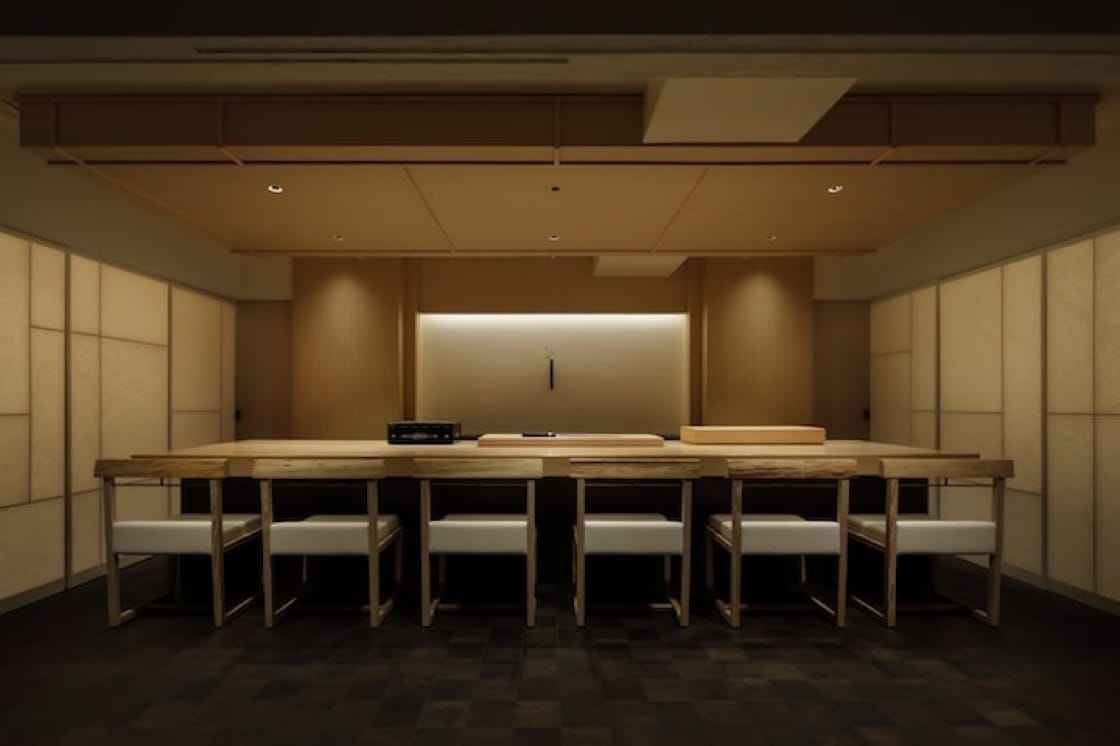 “For cooking and serving customers, I think the ideal number is six In the previous restaurant, there were 10 seats at the counter and I felt the distance [from the customers]. I felt that I did not achieve my expectation of good service. Customers would want to speak to the chef and I also want to know if the customers have enjoyed the food. So instead of 10, I now serve only six.”

He finally set up his own restaurant in Ginza in spring 2018.

“Literally, Hakkoku means white and black, which is also the image of the samurai. My sushi style comprises only sushi, without any appetisers. It is a straightforward concept, which is easy to understand.”

He adds: “There is no black in the white colour and vice versa, white does not exist in black, so it is important to strike a balance between them. You also see that for the rice and fish on sushi, so is my presence as a chef in the restaurant for the customers. That’s how the name of the restaurant came about.” 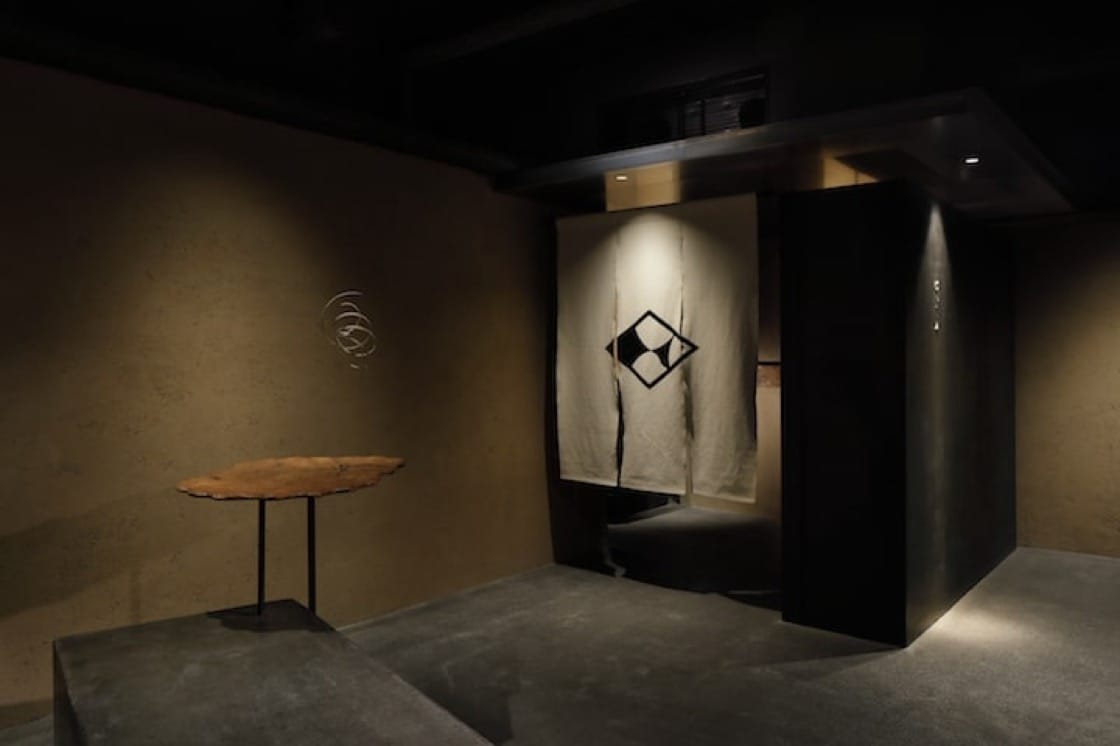 Having travelled extensively, he has learnt from his overseas experiences that there are many things for chefs to work on. “I wanted to know more about other cuisines and chefs, so I started to travel abroad. But after it all, I realised that Japan has the best quality of fish, so I don’t think I can do sushi in other countries,” he says.

“What I’m doing now is in the hope of improving the sushi industry and food industry. People from other countries come to Japan to eat and chat, and we end up as friends. It is not just the customers, but foreign chefs also come to Japan due to their interest in Japan and sushi. Chefs in these countries are working hard to improve, so I hope to help them, so that in time to come, younger generations will aspire to work in this industry.”

He adds: “This also applies to females in the industry. This is a tough environment for them, but for people who have passion in sushi, I think it is not a problem. I’m not trying to change any old regulations, but what we can do now to preserve the traditions while overcoming the new challenges. If not, there will be no progress, so we need to face these challenges.” 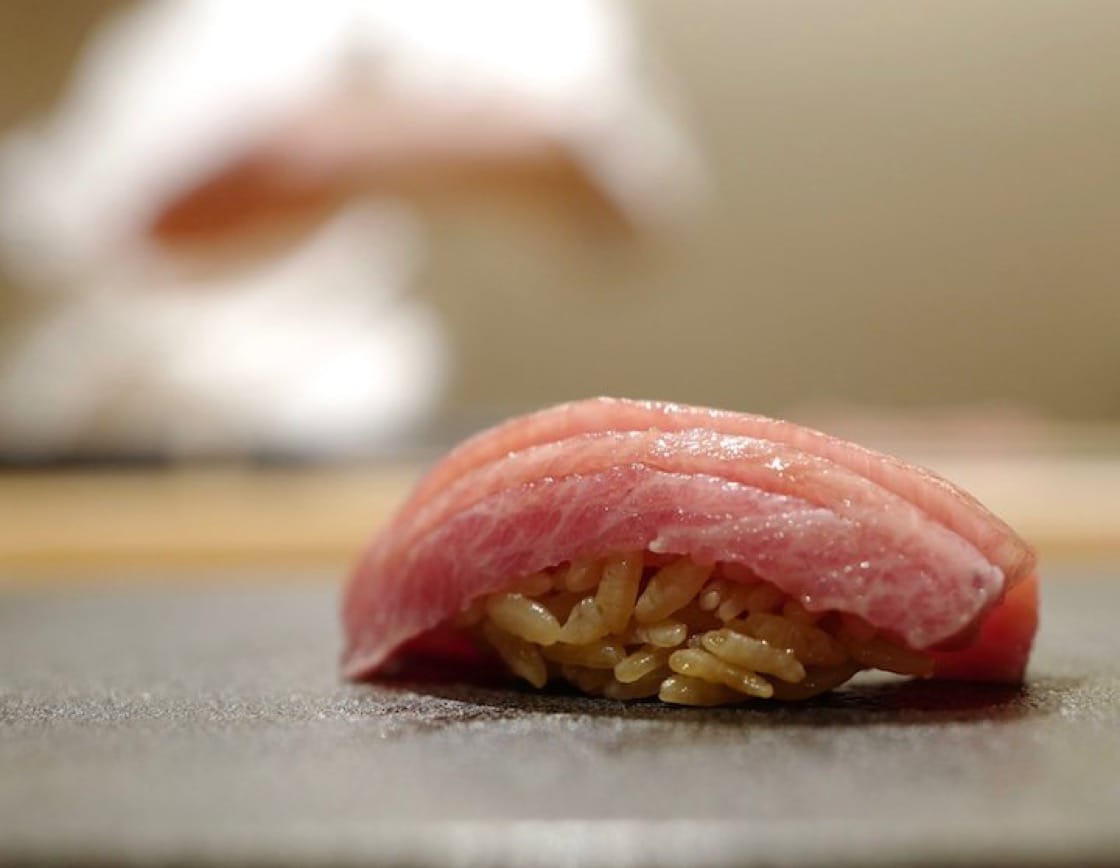 He does not see his approach as being unconventional or modern and draws a comparison with the art of making edomae sushi, which relates to a form of sushi found in the Edo period 200 years ago.

“My style can look new, but actually there is nothing new in the trade. We are learning the ropes for edomae sushi and how to provide delicious sushi for customers. As a chef of edomae sushi, I don’t use truffles or caviar, but I use kelp and soya sauce. It depends on how you apply the techniques of edomae sushi to make delicious sushi. There is nothing new about it, but you need to review the traditions, match it to the modern times and create a balance between them. This is something always on my mind.” Sato feels that it is important to maintain a set of core values at heart and then incorporate new things gradually.

“Of course, the techniques are important, but I think what is most important is to learn about the way of life. I think this can be applied to any occupation, that is, how you grow as a person and what kind of person you become. I learnt all these from my parents.” 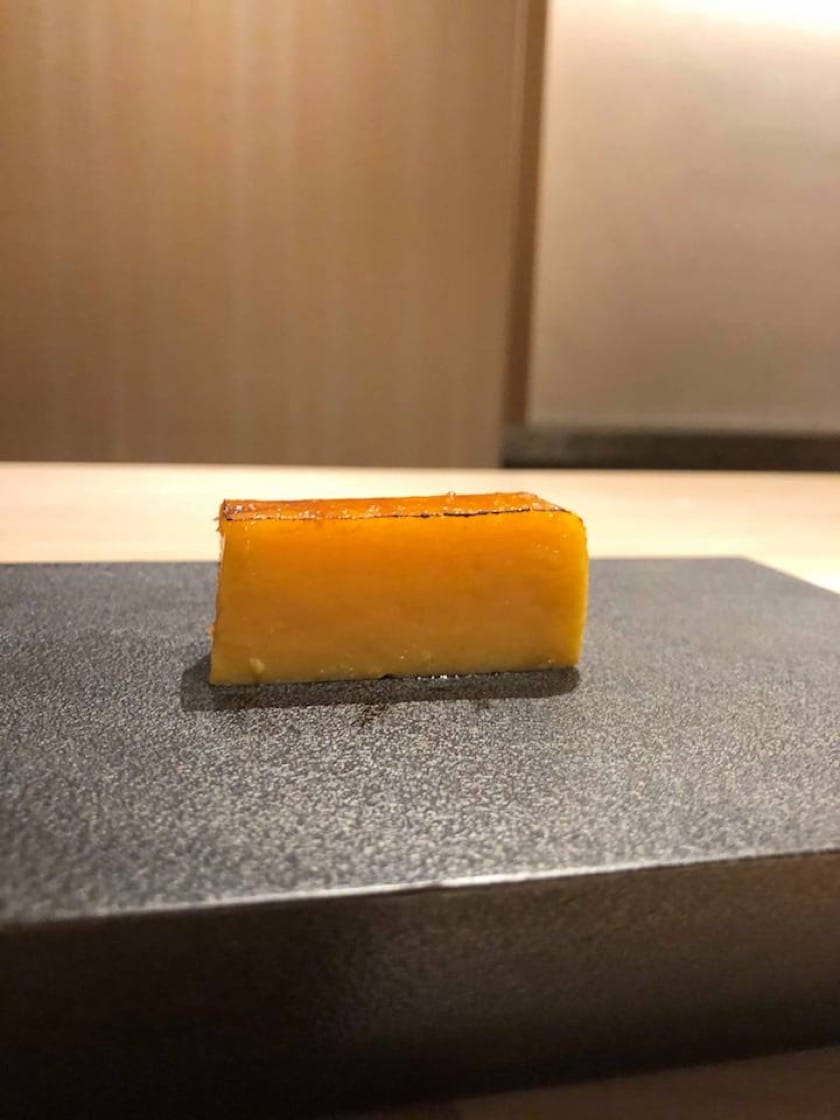 He has no plans on opening branches as Hakkoku is the only shop he wants to concentrate on, whilst working on passing down the craft to the next generation.

“It is important this knowledge gets passed down to future generations, so even when I’m not around anymore, my feelings and thoughts can be conveyed continuously.”

Ask him what his vision is then, and he says philosophically: “Food involves the five senses and eating affects your feelings. After eating, it needs to make you feel good. I think success, to me, is having everyone around me to be happy. If I am able to make more people happier, the happier I will also be. Maybe this is not the common concept of success, but I will feel really happy.”

He adds: “What can I do to achieve this? Every day, I think about this. I am a sushi chef and I can only make sushi. I just want to make people happy with my sushi.”