Ana Fong of Tong Heng, a time-honoured Cantonese pastry shop, reveals that lard is the secret ingredient in its signature egg tarts.

Always had a burning question but not sure who to ask? In our regular Ask The Expert section, we do all the noseying so you don’t have to. In this edition, we get Ana Fong of heritage Cantonese pastry shop Tong Heng for the secrets behind their tempting egg tarts.

The distinctive diamond-shaped egg tarts at Tong Heng, a 78-year-old pastry institution in Chinatown, are legendary. Each of the delectable tart has a bright yellow wobbly egg pudding nestled in a crispy and flaky crust that tempts you with the maddening scent of freshly-baked pastry.

While the bakery underwent a bold and hip interior overhaul in April, much of the kitchen remains the same. After nearly eight decades, just what is it that keeps people coming back for more? Ana Fong, who is part of the third-generation Fong family that runs Tong Heng, reveals some of the time-honoured tips and techniques employed in an exclusive tour of the shop's operation. 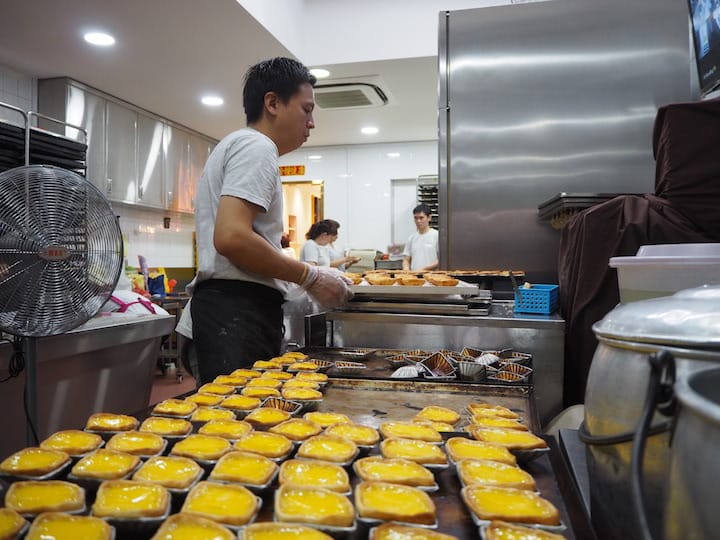 The egg tarts at Tong Heng are mostly made manually. (Credit: Kenneth Goh)
Dear Ana,
What is the secret to making perfect egg tarts?

At Tong Heng, much of the egg tart-making process is still done manually by a team, which has been working there for more than 10 years. This includes rolling out the dough and pressing each ball of dough into each mould by hand.
Why not semi-automate the laborious process? Fong says that one of her aunts attempted to automate the making of egg tarts in the early 2000s. She recalls: “We tried it for a while and asked our hearts when we ate the egg tarts. We didn’t like the crust as it turned more biscuit-like, instead of being flaky.” Her aunt then reverted to making the egg tarts by hand.

During the tour, Fong proudly points out that only three types of baking equipment sit in the kitchen — the oven, planetary mixer and encrusting machine. The latter is crucial in yielding the trademark flaky texture of the egg tart crust. 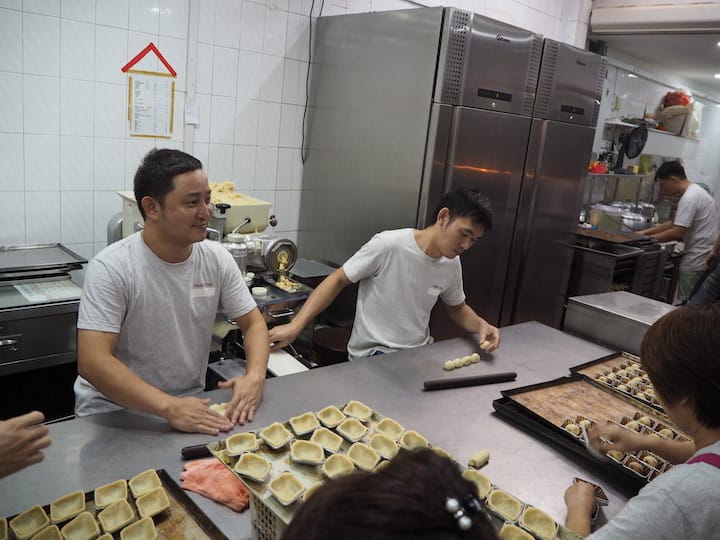 The kitchen staff at Tong Heng roll out the pastry dough for the egg tart. Each dough is manually pressed to fit the diamond-shaped mould. (Credit: Kenneth Goh)
The crust is made with an interlaying of two types of dough in the encrusting machine — one that is made with water and the other is made with lard.

The dual-layered dough, which yields an airy and flaky texture when baked, pops out of the machine as ping pong-sized balls. The balls of dough are then rolled out and placed in the diamond-shaped metal egg tart moulds.

Later, two seasoned kitchen staff step in to press and spread the ball of dough with their fingers till it hugs the mould with a thickness of about 2mm. With their speedy and nimble moves, it is little wonder that the duo have been at this for more than two decades. 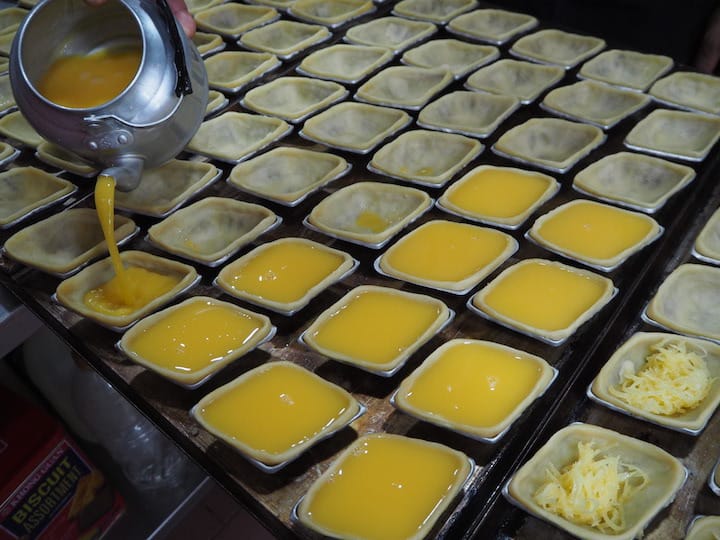 An egg yolk mixture is poured into the diamond-shaped pastry shells. (Credit: Kenneth Goh)
After the egg yolk mixture is poured from a kettle into the pastry shells, it is time to bake the tarts. A deft control of heat and switching sides of the baking tray is required so that the egg mixture does not get cook through and retains a pudding-like consistency, while the crust is baked through.

After the baked tarts are cooled, they are knocked out of their metal moulds by hand. 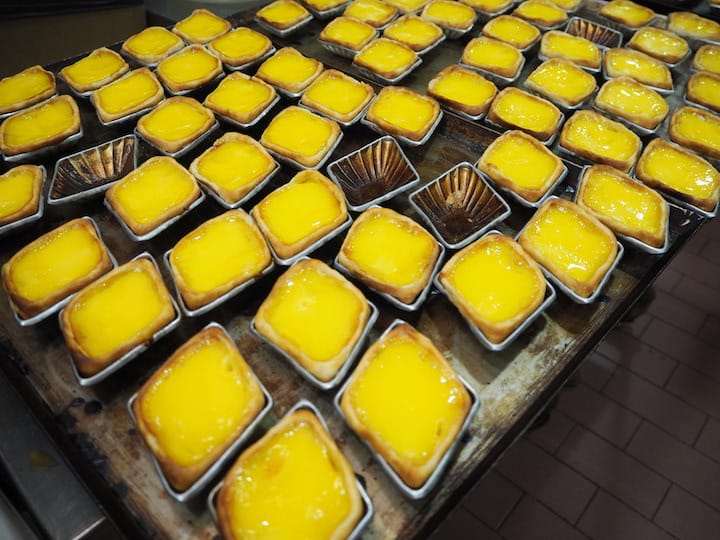 Lard is the secret ingredient that makes these egg tarts so fragrant. (Credit: Kenneth Goh)

What makes Tong Heng’s egg tarts different from the rest, Fong replies in a heartbeat: “We do not use a drop of dairy products — no milk, butter and cream.”

She explains: “Dairy products make the egg yolk mixture runny and when dairy products are used to make the crust, it becomes firmer.”

And of course, lard is the secret weapon that is used in the egg tart’s pastry dough to add fragrance. She says: “This is the same as eating char kway teow without lard; you know that something’s missing without it.”

Always had a burning question but not sure who to ask? Send in your questions to lifestyle@michelin.sg with 'Ask the Experts' in the title and we’ll help you find the answer.