Caviar, the luxurious salted sturgeon roe, is one of the most prized dining delicacies and is a popular garnish that adorn many exquisite dishes in Michelin-starred restaurants around the world. The mere sight of glistening circular tins that house a bed of glistening black pearls is enough to send gourmands squealing in excitement as they watch chefs scoop out heaps of the sought-after roe.

Caviar are bead-like eggs from sturgeons, which belong to one of the earliest families of bony fish that originate from subtropical, temperate and sub-Arctic rivers. Traditionally, sturgeons are found in the Caspian Sea that is bounded by countries such as Russia and Iran. In the past decade, China has emerged as the leading producer, accounting for 60% of the world's production of caviar. 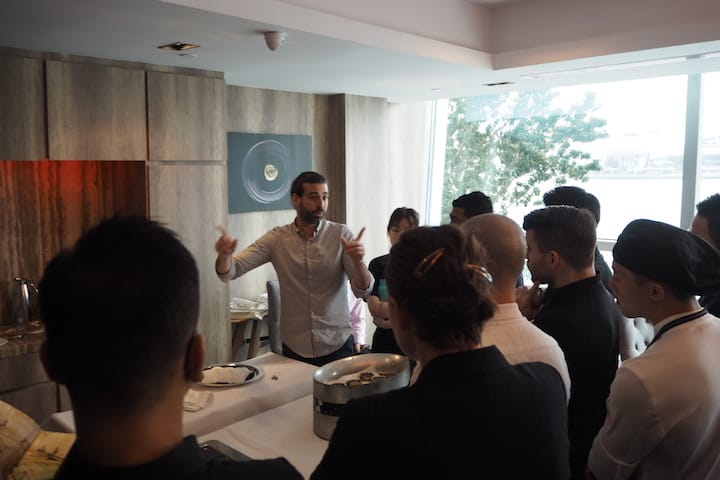 Mr Cedric Paquet of Royal Belgian Caviar (centre) conducts a caviar-tasting session for the staff of one-Michelin-starred restaurant, Saint Pierre. (Photo: Kenneth Goh)
The MICHELIN Guide Digital snagged a special opportunity to attend a caviar-tasting session by caviar producer Royal Belgian Caviar in one-Michelin-starred contemporary European restaurant Saint Pierre. The Belgium-based producer, which breeds its own sturgeons, produces about 5,000kg of caviar annually. We sat down with Cedric Paquet, brand ambassador of Royal Belgian Caviar, to find out about the finer points of enjoying these indulgent orbs of black gold. 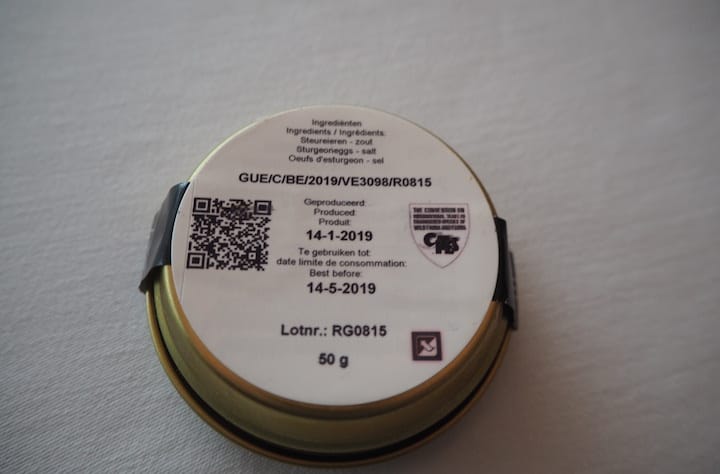 The CITES code, which is printed on the underside of caviar tins, provides a lot of information on the provenance of the caviar. (Photo: Kenneth Goh)

1. Look Out For The CITES Code

In the world of caviar-production, the best way to decipher the provenance of the salted sturgeon roe is by looking at the CITES code that is printed at the back of the caviar tin. CITES is an acronym for the Convention on International Trade in Endangered Species of Wild Fauna and Flora, an international agreement among countries to ensure that trading of wild animals and plants does not endanger their survival.

Sturgeons, which mainly originates in rivers in the Northern hemisphere, have long been a victim of overfishing and poaching due to the profitable sturgeon-rearing business. CITES has been regulating the international trading of all sturgeon species since 1998 and introduced a standardised labeling system for worldwide caviar exports.

The long line of code starts with (in this order) a three-letter species code (derived from the name of the species in Latin), how the caviar is grown (W for wild-caught or C for captive-bred), country of origin, year of harvest, official registration code of the processing facility and identification number for each production batch.

2. Some Caviar Are Re-packed

While some caviar makers pack the salted roe directly from the sturgeons to tin, some importers re-package the caviar into their tins and bottles. Paquet adds that the caviar’s quality might not be as fresh as it has undergone a two-stage packaging process with unnecessary exposure to air.

For re-packed caviar, the CITES code varies slightly. It ends with the official registration code of the repackaging plant, including another country code if the caviar was repacked in a different country from where it was produced. 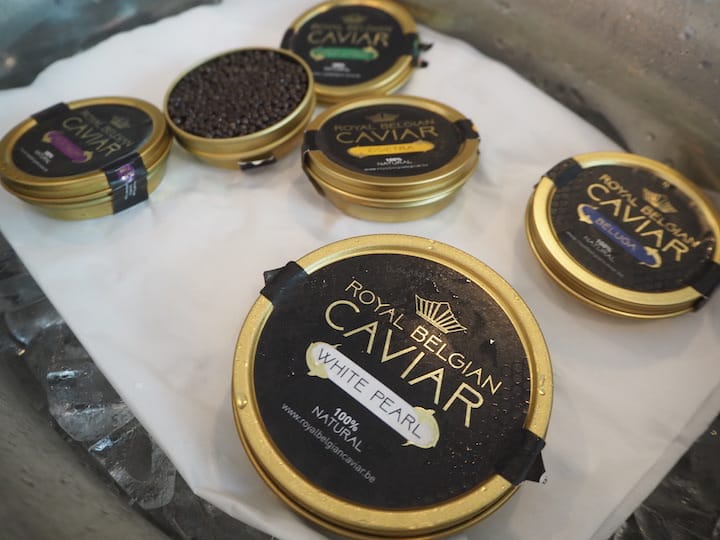 To find out which the origins of the caviar, do not just rely on the title printed on the label on caviar tins. (Photo: Kenneth Goh)
3. Do Not Be Deceived By Fancy Names

Paquet says that fanciful names printed on the packaging of caviar tins are nothing more than just marketing spiel. Titles in the Royal Belgian Caviar selection as Gold Label, Platinum and White Pearl say nothing about the species of the sturgeon that it originates from. The sturgeon species can be identified accurately from the all-important CITES code. For example, the popular Beluga sturgeon is identified as HUS, which is derived from its Latin name, Huso Huso.

When twisting a tin of caviar open, a click sound should be heard — a sign that the tin has been vacuum-packed properly. The appearance of the black orbs should be “shiny like pearls”. Paquet adds that, contrary to popular belief, caviar isn’t exactly jet black. When viewed in natural light, it can come in hues such as grey, dark brown or olive-green.

For example, the Osietra caviar is olive to dark green in colour, while Beluga caviar has a greyish ebony shade. He adds that it is vital to give the tin of caviar a sniff. “Fresh caviar should not have a strong fishy smell, so there shouldn’t have much of a briny, metallic or iodine-like smell,” he adds. 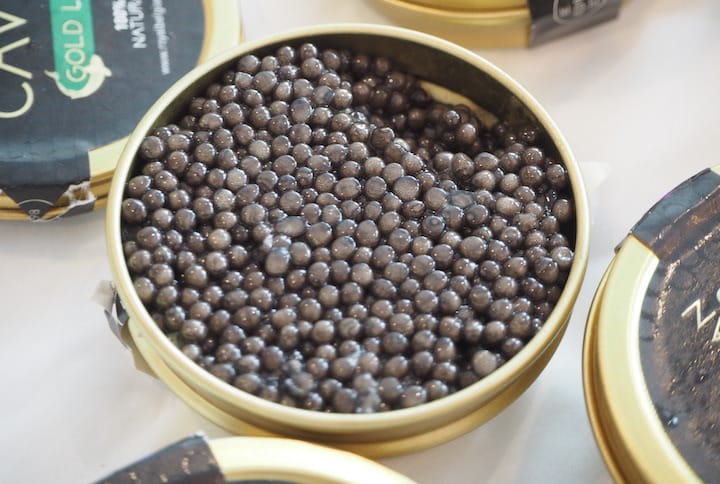 Caviar should have an attractive and shiny appearance and do not have a strong fishy or briny smell. (Photo: Kenneth Goh)

Just like splurging on luxury goods, start on a low budget and smaller quantity first. “If you start off with a big tin, there might be wastage if you don’t like the taste of the variety of caviar. Caviar novices can start off with roe from the more common Siberian sturgeons (Acipenser Baeri), which have a shorter maturity period of around five years and have a lower price point.

Osietra and Beluga caviar are more pricey as their harvest cycles are less regular. Osietra caviar, which is roe from Russian sturgeon that originated from the Caspian Sea, requires at least nine years to produce its first cycle of eggs. A harvest cycle of Beluga caviar is at least 18 years. And always request to sample different varieties of caviar before buying them.

Paquet offers a three-step method to taste caviar properly. First, spread and roll the individual beads of roe around the tongue, gently rolling the orbs against the roof of your mouth. Then crush the eggs gently so that the first sensation of saltiness disappears, and the creaminess and butteriness of the caviar emerge in your mouth. 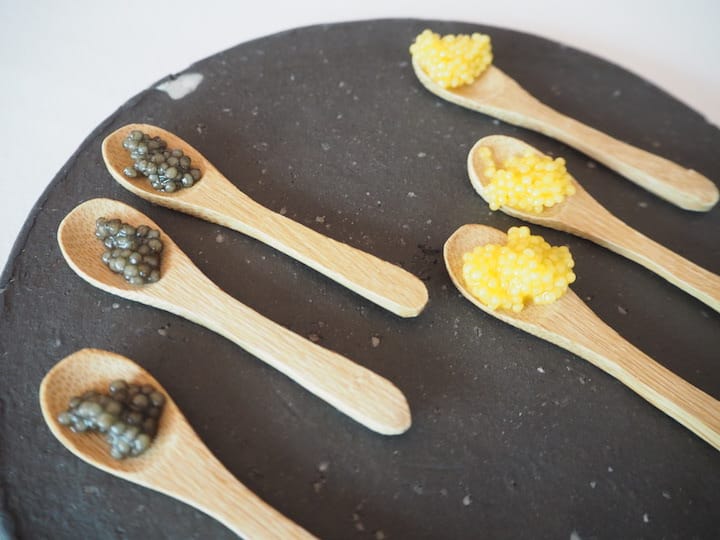 Serving caviar on wooden spoons is completely acceptable and does not alter the taste of the salted sturgeon roe. (Photo: Kenneth Goh)

7. No Mother Of Pearl, No Problem

Another caviar myth that Paquet debunks is that one only can savour caviar from mother-of-pearl spoons. Historically, the pearl-white spoon has been seen as a faithful accompaniment to caviar as it prevents the eggs from oxidising when they come in contact with silver materials, resulting in a metallic taste of the caviar. Paquet adds that eating caviar off plastic, porcelain and wooden spoons is completely acceptable.

Paquet advises that caviar should be best consumed within a few days after the tin is opened. The tin should be kept in the refrigerator at -2 to 4 degree Celsius. It should not be kept in the freezer as the cell structure of the caviar would be broken. Put your tin of caviar right at the back of your fridge to make sure that it is stored as cold as possible. If it is placed in a warmer environment and exposed to air, the oxidation of caviar would occur more rapidly and alter its flavour.

A traditional delicacy among Russian royalty, caviar has long been eaten with blini pancakes topped with sour cream and washed down with white wine or champagne. Paquet says that the acidity of these spirits offsets the creaminess of the caviar well. He adds that caviar should not come in contact with warm dishes, so the roe is topped on sour cream when served with mashed potatoes. Another popular pairing is caviar on earthy cauliflower mousse.

READ ALSO: What You Need To Know About Microgreens