One of the many culinary skills for which Japan is renowned throughout the world is knife technique. We spoke with Seiji Yamamoto, owner-chef of RyuGin, about knife technique, the spirituality of knives and some of his own cherished views. As the artist and epicure Rosanjin Kitaoji observed, the Japanese word ryori, cooking, is composed of two characters meaning ‘reason, the natural order’ and ‘measurement,’ hence, ‘measuring the natural order.’ Yamamoto is a chef who lives by that proverb. His work reminds us that, however specialized a chef may be or how logically he can explain difficult concepts, his cuisine will not taste good unless he understands his foodstuffs in a profound way. Once, in an episode that speaks volumes about his dedication to his craft, Yamamoto subjected daggertooth pike conger (hamo) to CT and X-ray scans, to analyse the fish’s anatomy in detail. When cutting squid, Yamamoto calculates the angle and depth of each cut to maximize its sweetness. Never complacent, he constantly seeks ways of making his dishes taste even better. This conviction is the foundation on which chef Yamamoto resolves to create the most delicious cuisine. 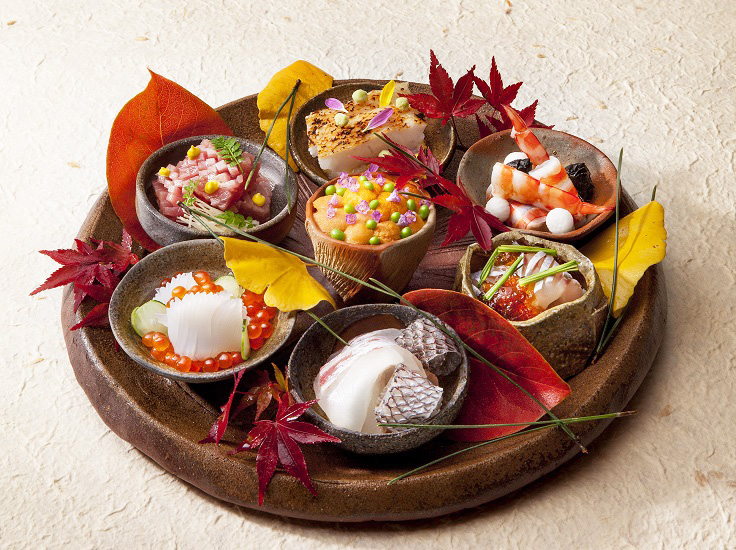 The instant when knife technique changes the flavour
In sashimi, the flavour changes depending on how the chef wields the knife. In Japan, knife culture is a descendant of swordcraft. Whereas double-edged blades are used in Western cuisine, in Japanese food preparation a single-edged knife called a yanagiba-bocho is used. After it is separated from the bone with a single pass of the knife, the flesh is cut into cross-sections so sharp that the cells are largely undamaged, preserving the moisture that contains inosinic acid, a vital umami component. 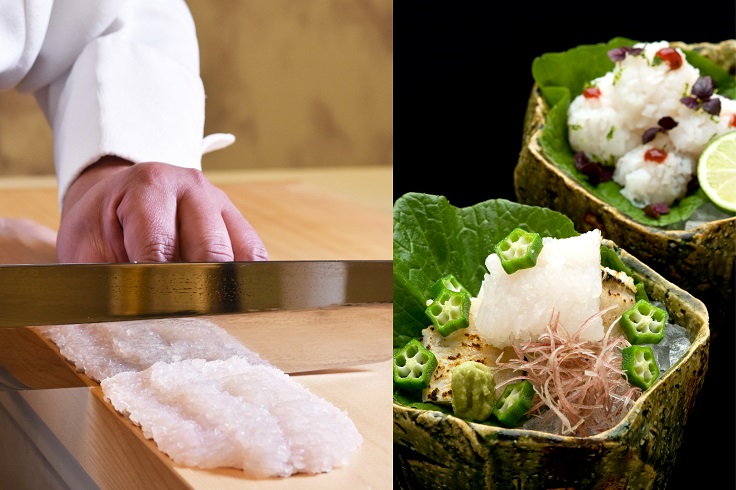 The o-tsukuri, or decoratively arranged sashimi at RyuGin is dressed in the sauce of the fish’s juices.
To the surface of the fish he has just cut with a 36cm yanagiba-bocho, Yamamoto gently applies salt water, drawing to the fore the juices that contain the umami. That very instant, he arranges the fish on the plate, sealing the texture and umami of the sashimi. Thorough knowledge of foodstuffs shows respect for ingredients. “From the moment a chef picks up his knife, he is mindful of the life he has taken,” muses Yamamoto, referring to the life of the fish. “Cooking is an act of resurrection.” 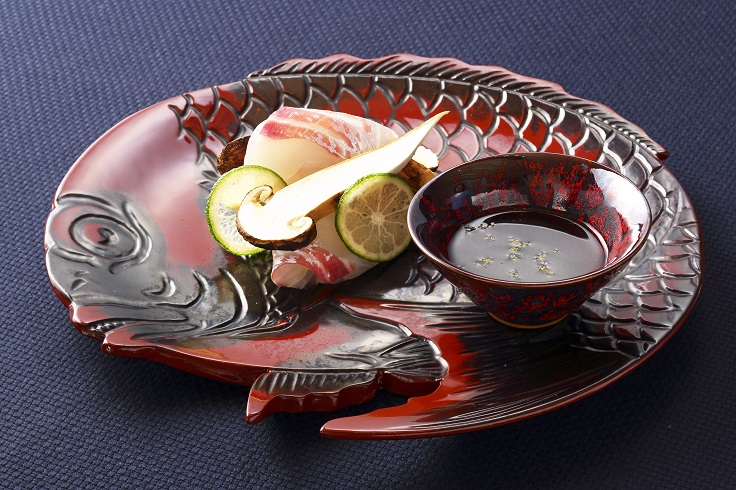 Squid knife techniques create a ‘sashimi that captures a moment in time’
Yamamoto inserts the knife deeply, cutting from both front and back as he aims for the centre. This technique maximises the surface area of the sweet centre portion, to ensure that it touches the tongue, physically enhancing the overall sweetness of the squid. The portions are prepared for diners to easily chew, helping to spread the umami rapidly throughout the mouth. Known as ‘twisting the bellows’, this is it in the deepest sense, creating a gush of sweetness and texture from the very first bite.

Seiji Yamamoto’s knife technique is ‘heart, technique and strength through calligraphy’
Calligraphy, or shodo, is considered one of the fine arts in East Asia. Grinding inkstick to make ink, then writing with a brush, the artist expresses the soul in a few deft strokes. Knife technique follows shodo, expressing one’s life as a summation of the warrior’s three qualities: heart, technique and strength. If Western cuisine can be thought of as painting in oils, Japanese cuisine is painting in India ink. Writing with charcoal cannot be corrected; it is decided in a moment’s graceful flourish. The techniques of Japanese cuisine, from drawing dashi to wielding knives, are an integral part of Japanese culture. 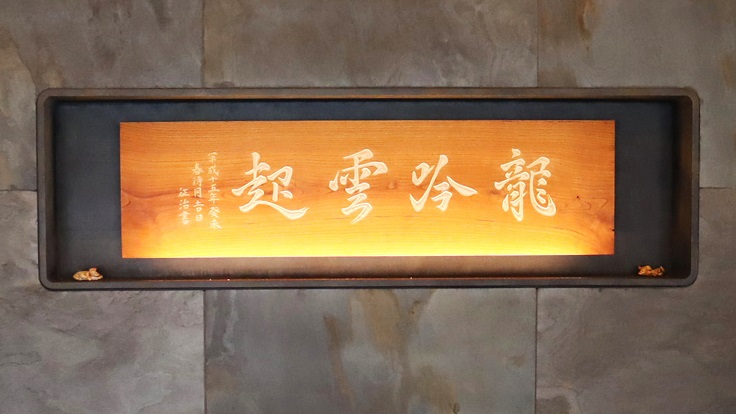 The calligraphy of Seiji Yamamoto. The four characters (read right to left) spell out the Zen proverb from which RyuGin derives its name: RyuGin sureba kumo okori, ‘When dragons sing, clouds gather.’

Japanese cuisine is a culture of eating with chopsticks
The skill of cutting with knives includes maintaining sharpness, a sense of where to cut and the right dimensions: in other words, the right size to put in the mouth. For example, one dish served at RyuGin is straw-baked duck. The breast meat is cut to bite-sized pieces and eaten with chopsticks, so that none of the meat juices, which contain the umami components, are lost.

Knife skills in home cooking: cuisine with a sense of dimension
We know that food is delicious when we put it in our mouth and has to be bite-sized or it’s hard to taste. Each foodstuff must be cut to its ideal size for tasting. There are dimensions that make a morsel feel and taste just right when placed in the mouth. This sort of knife skill can be practised in every home. 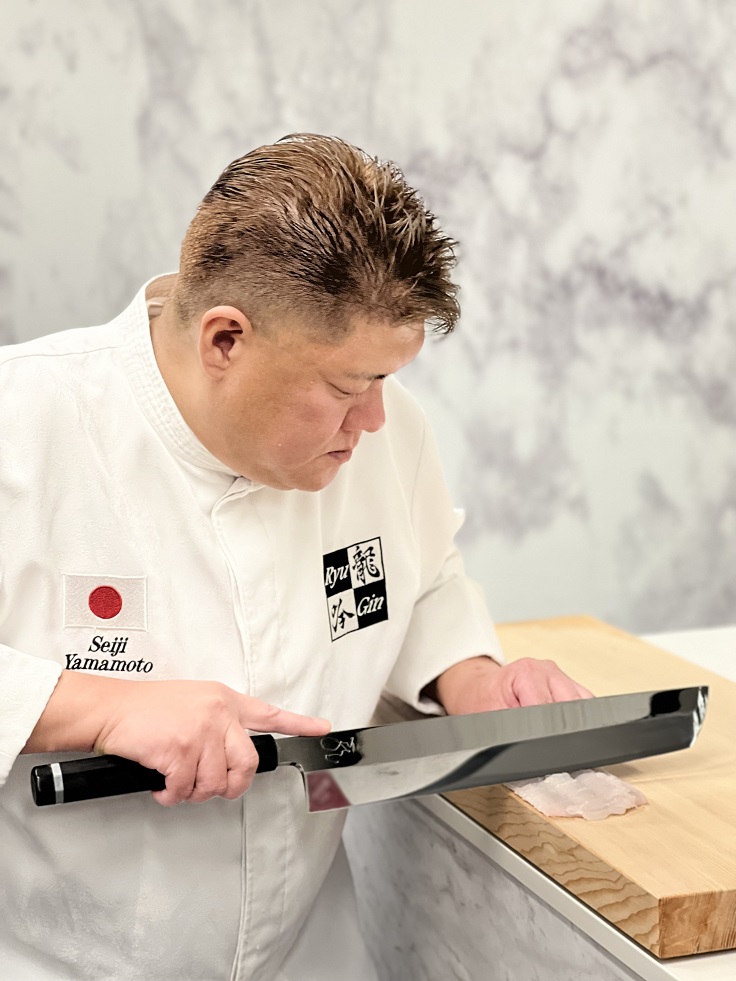 ‘I’m a chef because I love cooking.’
Chef Yamamoto’s pet saying is, “I’m a chef because I love cooking” He elaborates: “Everyone who engages in cuisine has his or her own pride. What makes a person become a chef, devoting one’s life to the art of cooking? I think the answer isn’t hard to find. What do I like about being a chef? Living in a way that satisfies my soul. I want to eat good things and I want to know how to make them. Since the day I joined the working world, cuisine is all I’ve ever known. The only way to make others understand the power, the amazement that cooking holds is the hard way: to perform as a professional, with the restaurant as my stage, patiently, one dish at a time. I have to show the world my worth by being the man who prepares these delicious dishes. I sum it up in one phrase: “I’m a chef because I love cooking.””      Photo：©RyuGin 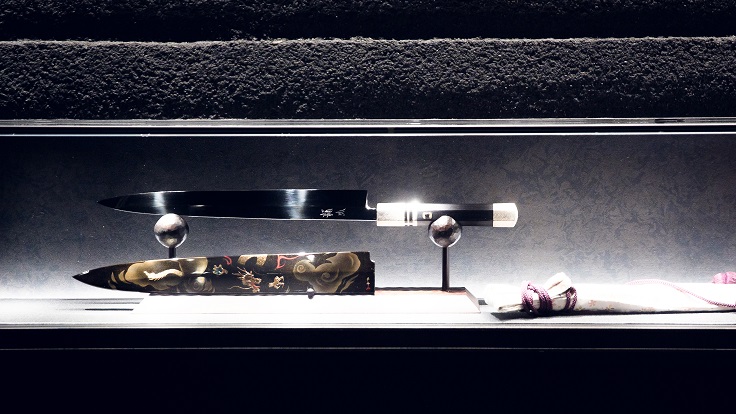 Confucius’ Analects states: “At thirty I stood firm; at forty I was unperturbed; at fifty I knew the mandate of heaven.”Chef Yamamoto started a Japanese restaurant in his thirties; At forty, unperturbed, he opened a new restaurant; at fifty, we can safely say, he became a person who knows the mandate of heaven as a chef. Yamamoto pours his efforts into training people who have the desire to becomes chefs—it fills him with curiosity and passion towards education. He offers this advice for aspiring young chefs: “If you aim to be a chef, setbacks and complications will come your way. That’s true in any job. The first step is to love cooking. Don’t cook to please yourself—cook to please the diner. When you do that, the path forward will open in due course.” 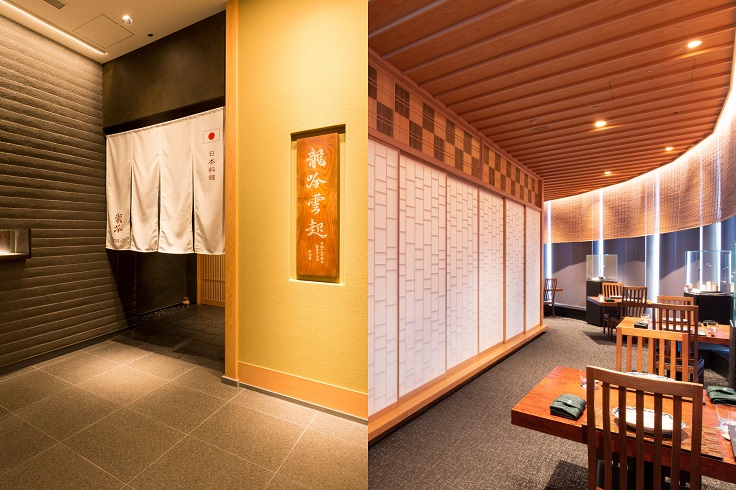