How Can Our Everyday Food Decisions Change The World?

We Visited London’s ‘Food: Bigger Than The Plate’ Exhibition To Find Out

Food: Bigger than the Plate, a multi-sensory exhibition featuring over 70 ground-breaking and experimental projects, was designed to explore global issues brought about by the way we produce and consume food. We popped down to the V&A Museum in London check it out and found ourselves on an informative, thought provoking and sometimes sensory journey…

"The future of food is in our hands and what we eat is one of the most important decisions we make every day."

The aim of the exhibition was to illustrate the need to change how we connect with every stage of the food cycle: how produce is grown, distributed and experienced. Consumer attitudes have certainly started to evolve – particularly with regard to sustainability – but it’s claimed that many are still unaware of how their food is produced or even where it comes from.

The exhibition was divided into four areas: Compost, Farming, Trading and Eating.

The exhibition opened with a display of original drawings of the London sewer system. It addressed the point that waste generated from food is not just that from production but from humans too – and reminded us what a ‘flush and forget’ culture we have created over the years. Numerous exhibits then illustrated various ways to create a more resilient food system.

There were some rather eye-catching Merdacotta ceramics made with dried cow dung and Tuscan terracotta clay. Also from Italy, were wine bottle labels printed on a substance made from spent grape skins and stalks; this bio matter would normally be burned after wine production but had been given a new lease of life.

There was also an exhibit on how food manufacturer McCain are using their waste potato peelings in the production of a new bioplastic called Parblex; often referred to as the new ‘chip-board’ it’s manufactured in a similar way to MDF. 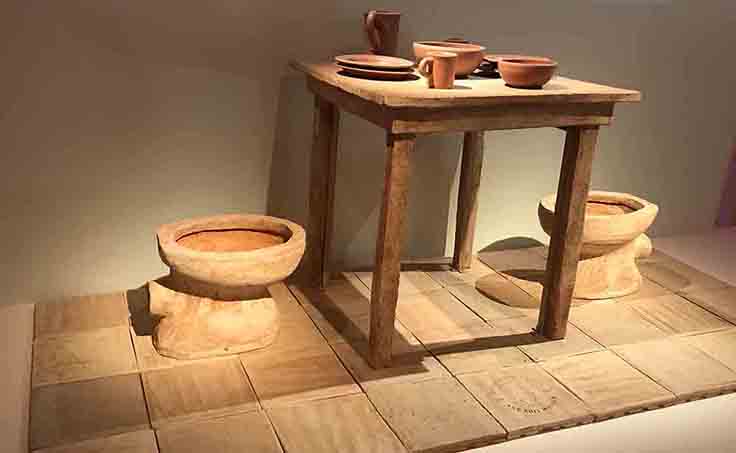 Here we were reminded how much farming has changed over the last 250 years, starting with a significant shift after WW2 – when mechanisation facilitated cheap, large-scale production – and leading up to today, where consumers have become increasingly interested in where their raw ingredients come from and what impact manufacturing processes are having on the environment.

The displays made it clear that farming needs to adapt and evolve as new diets and ways of eating become popular. Urban farming could become the future, with new housing developments incorporating space for growing fruit and vegetables – thus reducing the need for transportation; while fruit trees planted along roads and canals would not only provide a food source but add to the aesthetics of the area – even densely populated cities could play their part.

There’s also a move by many companies to echo our humble roots, by encouraging city dwellers to become more involved in their local community. Looking back to a time when families from London’s East End migrated to Kentish farms every summer to harvest hops and fruit, Company Drinks of Barking organise picking excursions, along with production workshops and social events, so that the full cycle of growing, picking, processing and trading can be experienced. 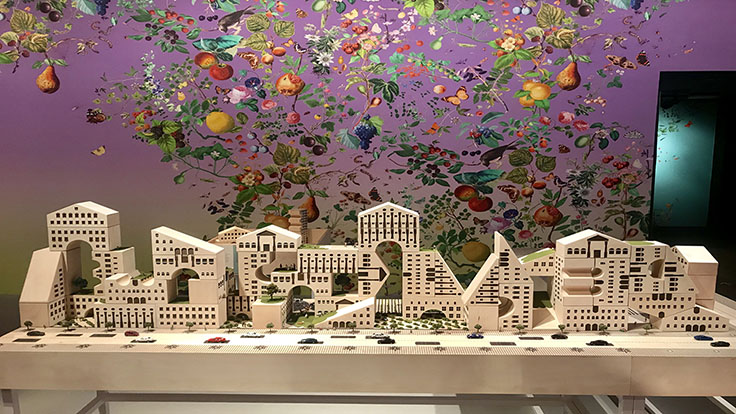 A Concept For Urban Farming On A New Housing Development

The third part of the exhibition highlighted our relationship with food in relation to its packaging. It charted early advertising for products such as Bovril and Sun-Maid raisins, moving on to full-scale branding and, ultimately, the techniques that supermarkets use to make our everyday shop more alluring.

"We were reminded that a large part of our relationship with food today is rooted in its attractive packaging, and told to reflect on our last meal and ask: how did the food get from the field to the plate?"

Over the years, the distance between producer and consumer has drastically increased, with the complex logistics and economics often shrouded in mystery. The invisibility of the true cost of manufacture can lead to us unintentionally devalue food, making it easy to throw away. For example, bananas grown in Ecuador can travel for 14 days over 8,800km to their final destination in Iceland; from grower to consumer, they can pass through 32 pairs of hands!

The final part of the exhibition looked at what and how we eat, including who has already influenced our eating habits and what the future might hold. This ranged from Elizabeth David’s ‘A Book of Mediterranean Food’ which shook up post-war Britain to the role of today’s celebrity chefs, bloggers and Instagrammers.

A table laid with innovative designer tableware showed how we can enhance our eating experience and provoke deeper engagement with our food, our bodies and each other. Not for the faint-hearted, meanwhile, was the selection of cheeses cultured from human bacteria, which illustrated how some of our tastiest foods are made using microbes; Heston Blumenthal was one of the contributors, his bacteria creating a Comté style cheese.

Before leaving, a visit to the LOCI food lab created by the Centre for Genomic Gastronomy asked us to pick three attributes from a list of 16 that we believed would make a great food system. A bite-sized snack was then produced for us based on our choices. For example, if we selected ‘zero waste’, the snack included tomatoes otherwise considered too ugly for sale.

The message we left with was this:

"When we choose to buy and eat something, all the processes that make up the food system come together – most often invisibly. If we are all more mindful and make conscious, considered decisions when selecting what to put on our plates, collectively we have the power to reshape the world."