Four-Hands Dinners: Why They Are Still Hot

These collaborative dinners are the perfect platform for chefs to mingle and learn from each other.

Four-hands dinners with guest chefs have become par for the course on Singapore’s restaurant scene. On any given month, at least two or three overseas chefs would clock air miles here for these one-off cooking collaborations, in which they present signature dishes or new ones that they craft with the hosting chefs.

These globe-trotting collaborations transcend cultural boundaries with Japanese, Chinese and Western restaurants joining in the action. At least five four-hands dinners took place in the past month. They include one by chef Julien Royer of two-Michelin-starred Odette in Singapore and chef Josean Alija of the cutting-edge Nerua Guggenheim Bilbao in the Basque Country in Spain, and another by chef Akiba Shigeo of Nami Restaurant in Shang-ri La Singapore and chef Kazuo Takagi of Takagi, a two-Michelin-starred Kyoto-style restaurant in Japan.

The MICHELIN Guide Digital uncovers why four-hands dinners have managed to remain popular.

For chefs, these collaborative dinners are invaluable opportunities to broaden their culinary horizon. Many chefs opt to break out of their comfort zones by teaming up with chefs from a different genre in order to be acquainted with a new set of ingredients, cooking techniques and kitchen challenges.

Takagi, who participates in two or three collaborative dinners annually, relishes these “educational cooking field trips”. He says: “ I am very curious and interested to learn and experiencing various cultures, food and culinary techniques from other countries. Through these collaborations, I get to learn different techniques from the other chefs, which I can adapt in my restaurant. My guests always look forward to the new techniques that I learnt from these trips in my dishes.” 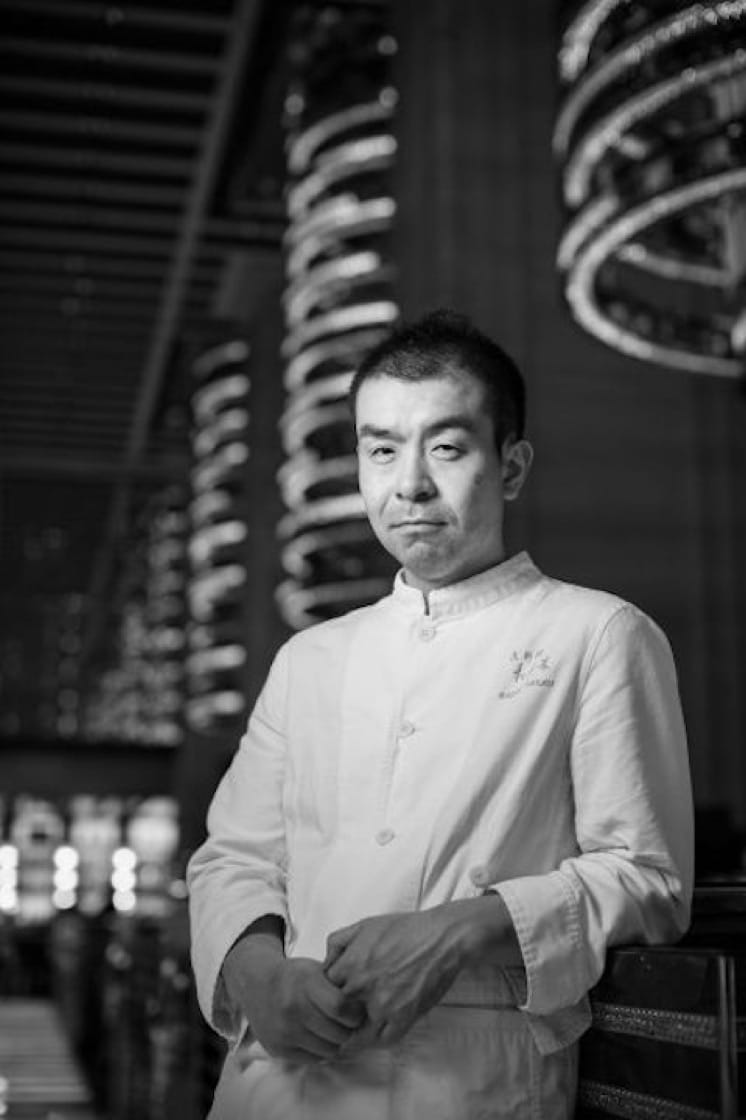 Taking part in four-hands dinners overseas has also opened his palate to local produce. During his most recent dinner here, he incorporated buah keluak (Indonesian black nut) in a skewer of steamed Chinese yam that was part of an exquisite set of eight Kyoto-style appetisers. He says: “Buah keluak tastes like miso for me. This is a special dish that was born in Singapore.”

The chef, who presents food in an elaborate traditional Kyoto style, adds: “I always ensure that the presentation of the dishes remains unchanged. I want to keep to the Japanese classics and protect the culture that has been handed to younger chefs.”

Four-hands dinners, he says, are also a platform for him to spread Japanese cuisine and culture. “When I travel abroad, it’s very sad

to find out that people only think that Japanese food is only limited to sushi and yakitori,” Takagi laments.

Echoing the same sentiments is Alija, for whom learning the ins and outs of a foreign cuisine ranks high on his to-do during his overseas cooking trips.

The jetsetting chef takes part in about 15 overseas four-hands dinners every year and they are all planned a year in advance so that restaurant operations are not disrupted. He says: “Learning and sharing new experiences gives a motivational push to our staff. After every collaboration, you become more intelligent about food and cooking.”

On a trip to Singapore last month, Alija got an introduction to Peranakan food when host chef Royer took him to a Peranakan restaurant. He says: “It is interesting that this cuisine has spicy and powerful flavours without using a lot of ingredients.” What left an impression on him was slathering velvety chunks of buah keluak on rice.

On the Indonesian black nut, the Bilbao-born chef says: “It is not easy to find a new flavour that has so much purity. I definitely plan to bring some buah keluak back to Spain.” 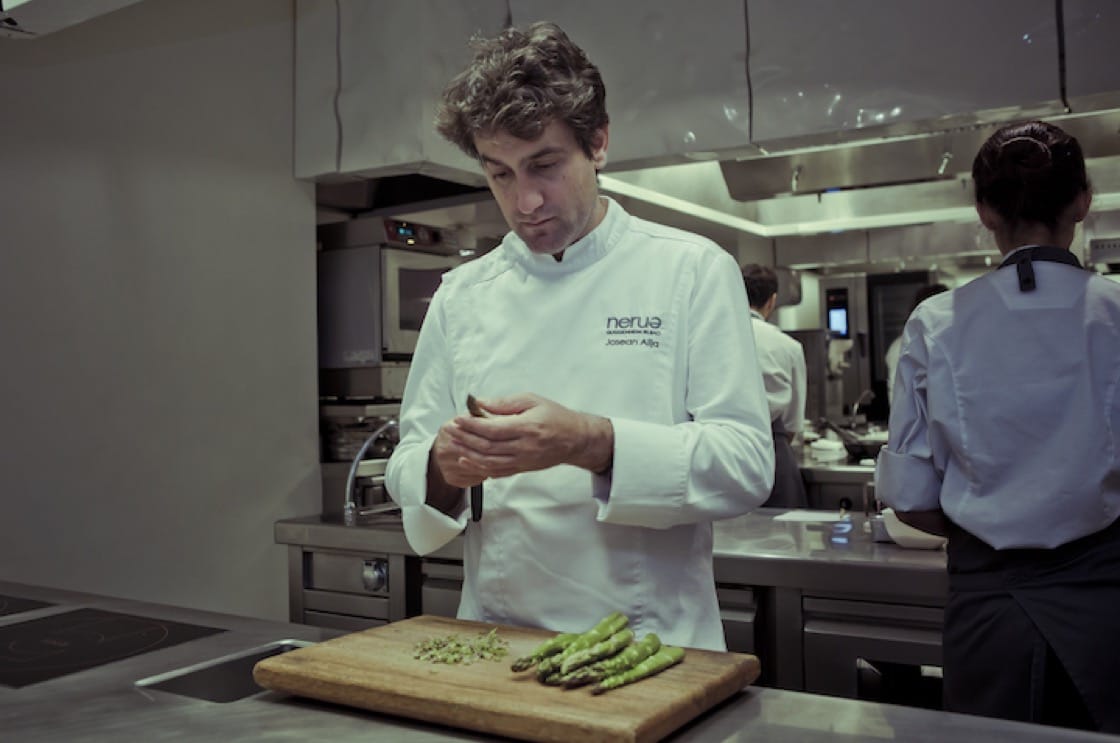 Some chefs see four-hands dinner as networking session with like-minded peers or as Alija puts it, “it is a way to build relationships with people that you really like”. He first hit it off with Royer last year when they met at a 10-hands dining event in Manila last year. He says: “Although our cooking styles are different, we share similar values such as having a focus on the purity of ingredients.”

Agreeing, Takagi says: “I am very flexible. I can work with French, Italian and other Japanese chefs to experience the dynamics of working with other cultures.”

Besides networking, four-hands dinners present an opportunities for some restaurants to test out new and upcoming markets. Chef Andrea Spagoni of one-Michelin-starred Beefbar in Hong Kong was in Singapore last month for a collaborative dinner with modern European restaurant Ash & Elm in InterContinental Singapore. The Italian chef, who does cooking collaborations twice a year, says: “These dinners are great opportunities to introduce ourselves and our food to another market and to familiarise ourselves with new dining audiences.” 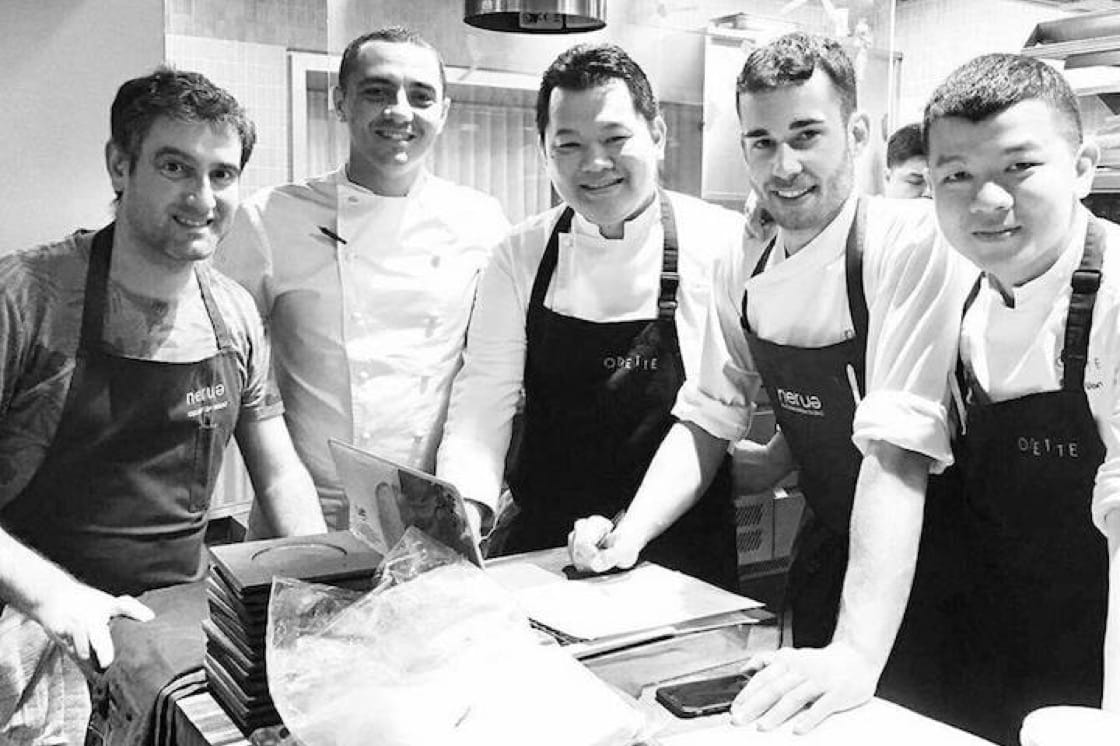 Royer, who does four or five chef collaborations a year, is selective about picking “top and exciting chefs” to team up with. Come September, he will tie up with chef Dominique Crenn from the two-Michelin-starred Atelier Crenn in San Francisco. In December, chef Alexandre Couillon of two-Michelin-starred seafood restaurant La Marine in France will cook at Odette.

Royer says: “We choose chefs with the same cooking philosophy. I am a firm believer that we can learn and taste something new every day in this job. That’s a beauty of being a chef.” He adds that attracting a stable of world-class guest chefs to his restaurant gives his staff a break from their routine, broadens their culinary horizon and makes it exciting for them to work at the restaurant.

It is not only kitchen staff who need a change from the norm. Diners too expect something new from the regular menu.

Royer says: “As a restaurateur, it is a good way to propose something new and different to our regulars. These people may have the money but they do not have the time to travel to the other side of the world to discover food from chefs whom they have been following.”