The charm of a good plate of Hainanese chicken rice lies in the combination of piping hot rice and cool poached chicken eaten with spicy chilli sauce, dark soy and minced ginger.

Tian Tian Hainanese Chicken Rice
Where: 1 Kadayanallur Street, Maxwell Food Centre #01-10/11
Tel：9691-4852
Opening hours：10am- 8pm, CLOSED ON MONDAY
Stall owner：Foo Kui Lian
A CELEBRITY STALL FOR CELEBRITY DINERS
Probably our nation’s most famous chicken rice stall, known by both locals and foreigners, Tian Tian Hainanese Chicken Rice is listed in just about every guidebook on Singapore. Located close to Chinatown, within one of Singapore’s iconic hawker centers – Maxwell Food Centre, Tian Tian might be surrounded by many other famous stalls fighting for attention. Yet it holds its own. 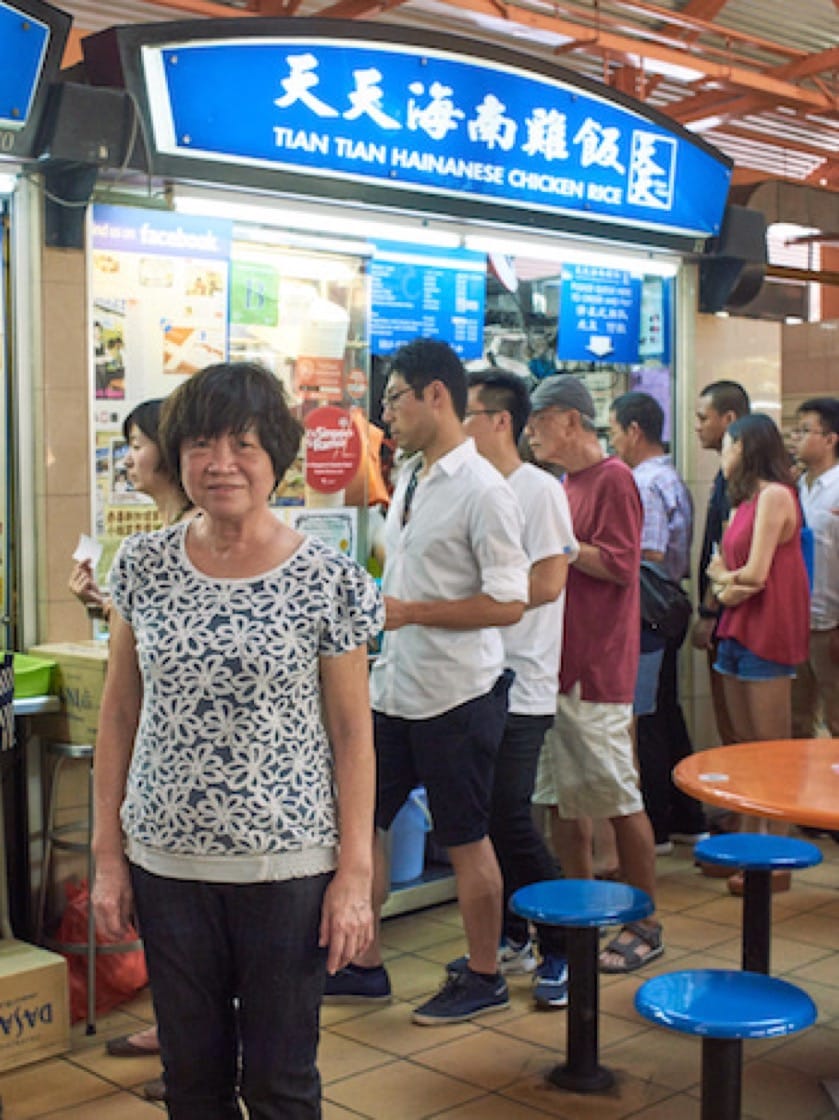 A FAMILY BUSINESS
While 67 year-old stall owner Foo Kui Lian is now a familiar public face, making frequent media appearances as spokesperson of the brand, the business was actually started by her elder brother. When he started the chicken rice stall in Maxwell Food Centre in 1987, Foo, who always had an interest in cooking, started learning from him. When he decided to retire two years later, she took over the reins.

When managing the business got too overwhelming, Foo roped in her husband Li Zhi Qing, who was then working as a lorry driver. Through their efforts, Tian Tian became a stall of repute, gradually becoming the food destination that it is today.
In 2009, their daughter Li Mei Yun become the second generation to take over the business. Apart from opening branches and setting up a central kitchen, she also rebranded Tian Tian operator, breaking away from the conservative operating style of a traditional hawker stall.
Speaking of her daughter, Foo shares that while she often helped out at the stall while studying, she didn’t think of taking over the business initially. Yet she changed her mind when she saw that her parents were not getting younger, yet were still toiling away. Within a year, she set up two more shops under the Tian Tian brand; and today, Tian Tian has outlets in Bedok, Clementi and Lavender, with a team of 40 staff.

“She was previously an accountant and had lots of opportunities to travel for work. I did not expect her to give up her career to help us, but I am very thankful that she did.”

While Foo is now relieved of her responsibilities, she still surveys the central kitchen at 6am every morning, before heading to the Maxwell Food Centre.

THE SECRET’S IN THE SAUCE
Tian Tian’s chicken rice is the product of constant innovation. Foo, who is of Hainanese descent, constantly worked at improving the foundation recipe learnt from her brother. It was through hands-on experience and constant trial and error that she mastered the technique to cooking perfectly tender poached chicken. 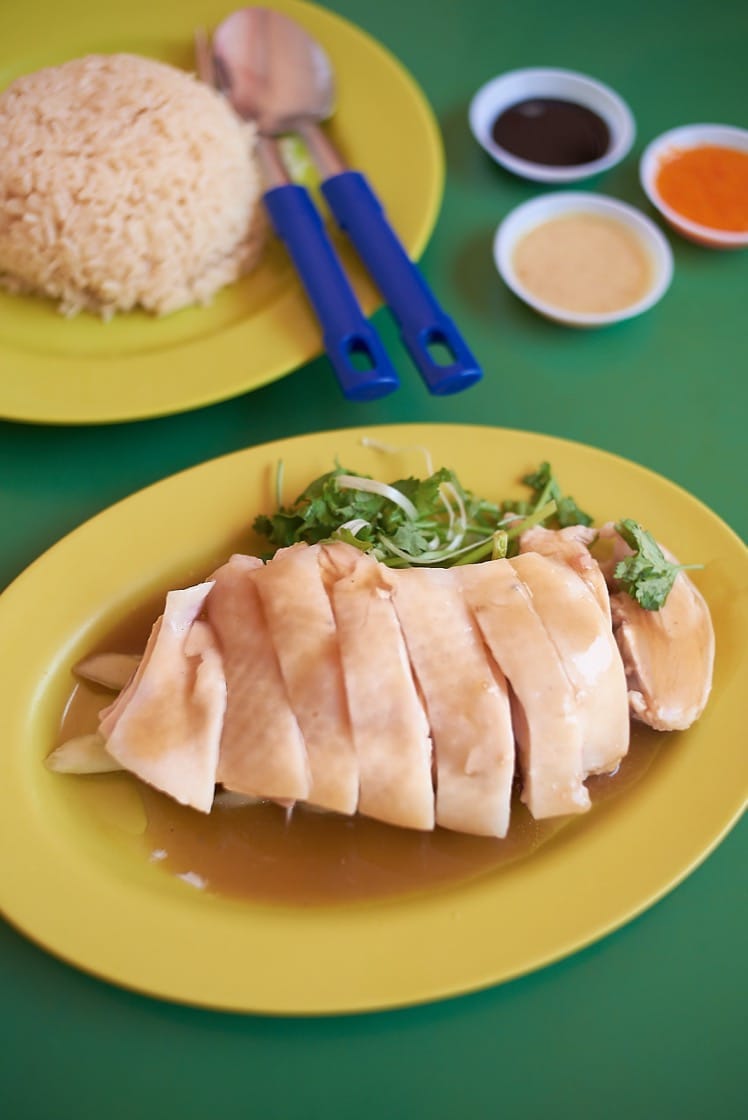 “I have been selling chicken rice for almost 30 years, and the cooking method has changed with the times,” observes Foo. “In the past we rubbed sesame oil on the chicken, but that isn’t done anymore. These days, we also soak the blanched chicken in an ice bath in order to lock in the natural juices and achieve optimal texture.”

American celebrity chef and food program host Anthony Bourdain once commented that the rice from Tian Tian is exceptionally fragrant and flavoursome, and is delicious even on its own. The preparation of the rice is a test of one’s culinary prowess. Apart from knowing the right proportion for the seasoning ingredients, one also has to diligently stir the rice throughout the cooking process.
This allows the rice to fully absorb the flavours of the stock, and for each grain to be cooked to plump, toothsome perfection.

Foo also reveals another “secret weapon”: their house-made dressing. Most stalls drizzle a mixture of soy sauce and oyster sauce over the chicken rice, but Tian Tian boils their own from a secret recipe. This is drizzled over the poached chicken to lift its flavor, and to bring depth to the entire dish.

The combination of piping hot rice and cool poached chicken eaten with spicy chilli sauce, dark soy sauce and minced ginger makes every mouthful a mélange of flavours and textures. There in lies the charm of Hainanese chicken rice.

WIDESPREAD RECOGNITION
While the stall with almost 30 years’ history has plenty of loyal local patrons, the number of tourists visiting Tian Tian have overtaken locals as Singapore’s tourism industry grows. Foo shares that some 70% of the diners come armed with a travel or food guide, and a quick search on the Internet will show that Tian Tian is reviewed by global clientele. in order for the rice to fully absorb the flavours of the stock, and for each grain to be cooked to plump, toothsome perfection. 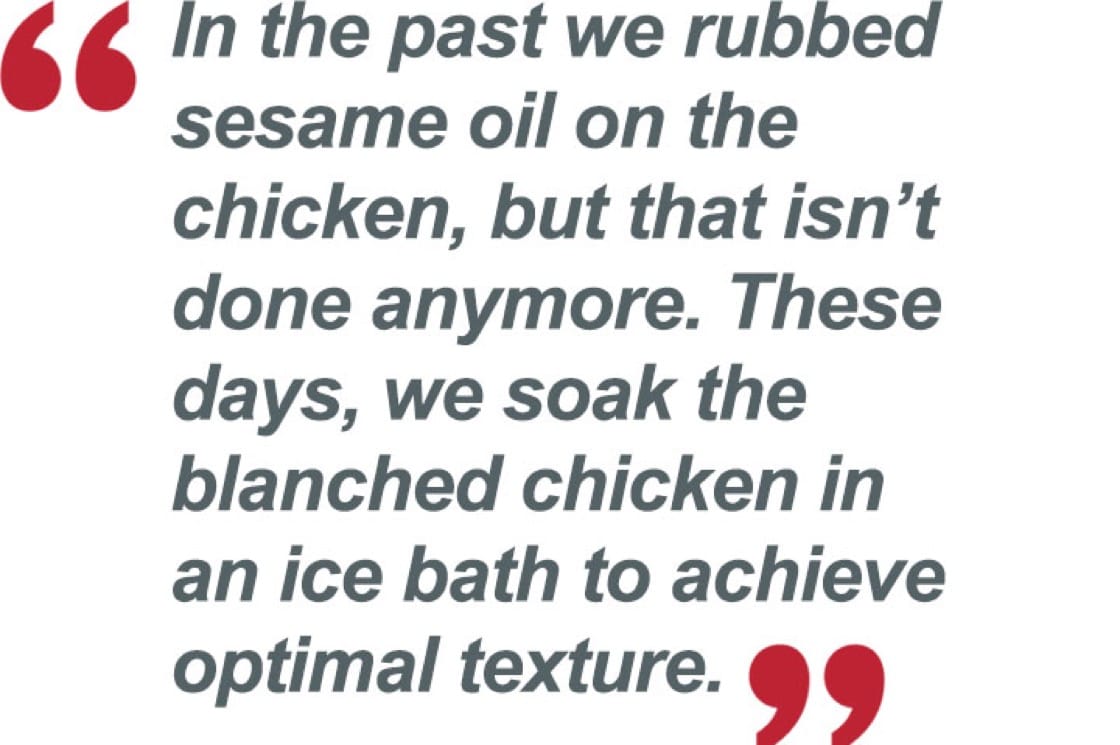 Even before earning the Bib Gourmand award, Tian Tian has won the recognition of the local trade and media community. In 2010 it won the inaugural Singapore Hawker Masters awarded by Lianhe Zaobao and Straits Times. In 2013, Foo also represented Tian Tian to take part Singtel’s Hawker Heroes Challenge, during which they won a culinary showdown with celebrity chef Gordon Ramsay. Chow Yun Fatt, Jenny Tseng, Nancy Sit and a host of other celebrities are also patrons of the stall.
“I am very grateful for the support and encouragement so many have given me. It has motivated me to get to where I am today.”

Ruen Ton: A Perfect Evening is as Simple as Comfort Food Coupled With Refined Drinks

On paper, chicken rice might sound like a dull meal, but subtle details in the nuanced dish make all the difference. Just ask the groups of friends at Ruen Ton (Bib Gourmand) many of whom have to queue for its Hainanese Chicken Rice during lunch peak hours.

Behind The Bib Singapore Bib Gourmand
Dining Out 3 minutes