When The Stars Align

Six chefs from the Michelin-starred restaurants of The Ritz-Carlton’s group of hotels shine brightly as they embark on a journey to four Asian cities to collaborate with their peers.

It is 5pm in Hong Kong and 118 storeys in the air at OZONE, one of the most prominent sky bars in the world, award-winning head bartender Kentaro Wada of The Ritz-Carlton, Tokyo is sharing cocktail inspirations in a masterclass and inviting guests to savour them. The Hong Kong skyline bathed in the beauty of sunset provides the perfect backdrop to his concoctions.

Mixologist Oscar Mena of The Ritz-Carlton, Hong Kong watches on. This is his stage, but he is hosting Wada for 3 days. 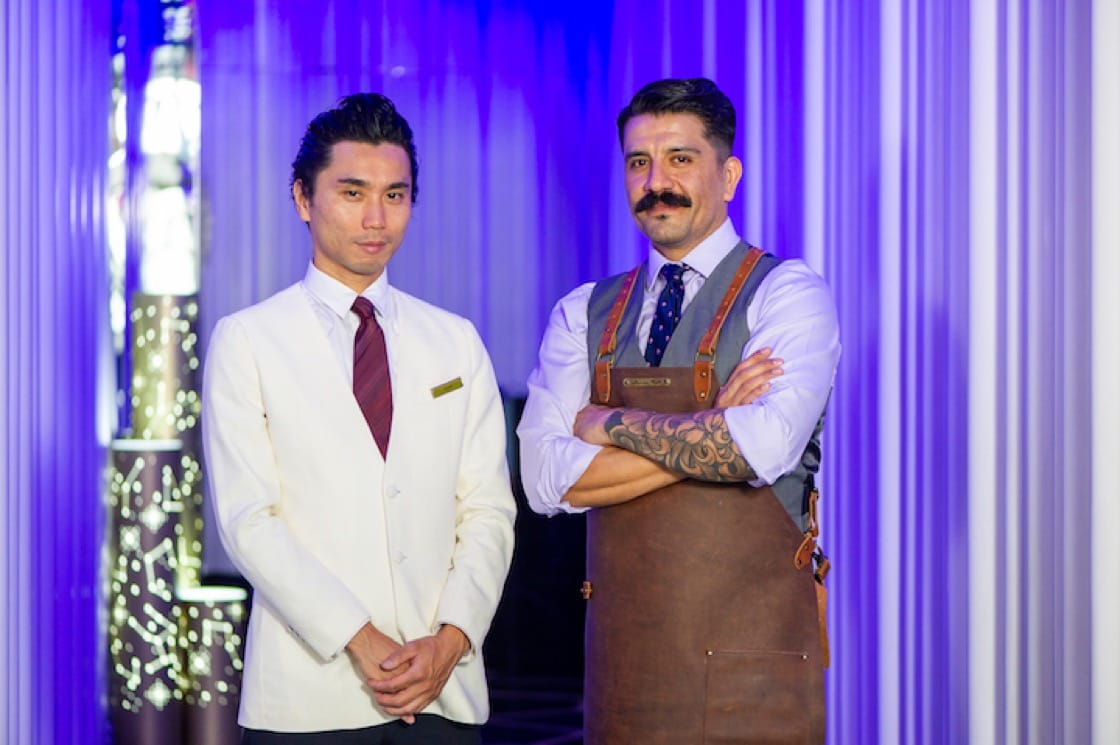 On Level 102 at two-Michelin-starred Tin Lung Heen, chef Paul Lau is busy in the kitchen. He waltzes around in style and is polishing up his special menu for the night, while at the same time trying to make Japanese chef Shintaro Miyazaki, of one-Michelin-starred Azure 45 in Tokyo, feel at home in his kitchen.

The duo had been put together by The Ritz-Carlton team for three days from 22 to 24 November to show well-heeled diners in Hong Kong the best of Cantonese and French cuisines at The Ritz-Carlton, Hong Kong. 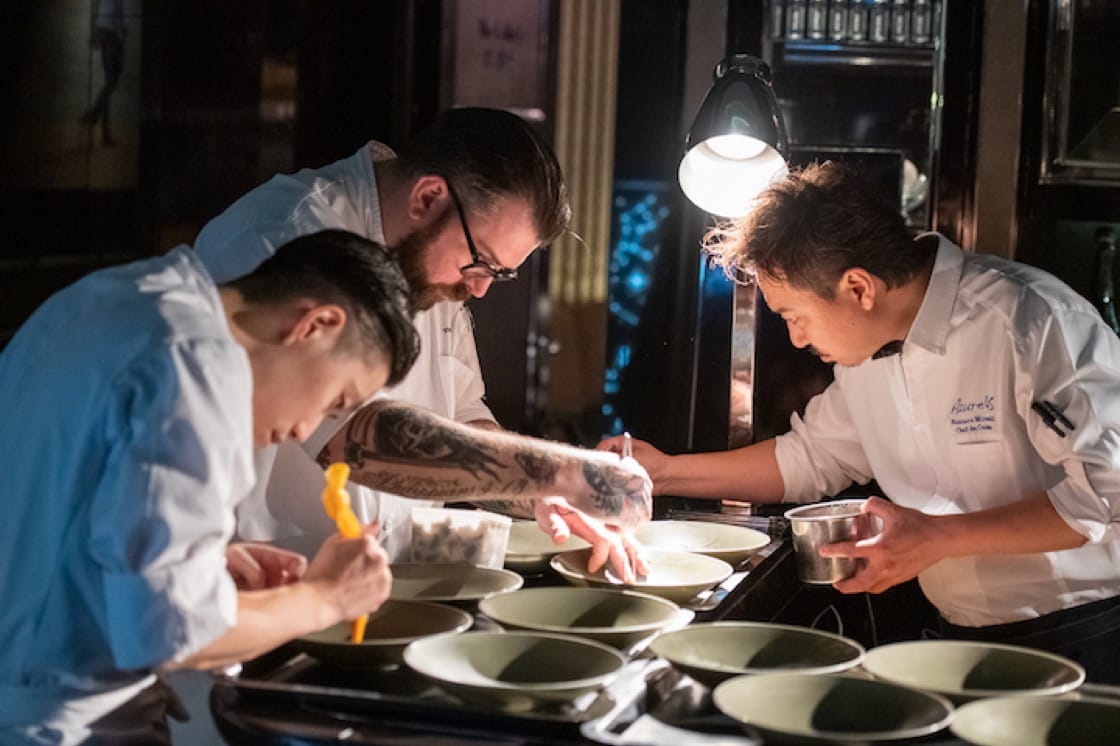 Chef Shintaro Miyazaki of one-Michelin-starred Azure 45 in Tokyo (right).
Guest chef Miyazaki — whose flight to Hong Kong was delayed by five hours — put up a good show despite the time crunch. He presented a Tuna Carpaccio, a Blue Lobster dish with pear and Tonka bean, a Saga wagyu and an eggplant mille feuille course, sharing his roots and showcasing his patisserie skills, which he had honed when he first started out in food.

He said: “All the prep work, rounding up the kitchen equipment and ingredients in English is slightly daunting, and the flight had to be delayed for five hours, but I came in to find everything so well taken care of by Chef Lau. This is The Ritz-Carlton spirit and the team here is awesome.”

He added: “Seeing how Chef Lau works in his kitchen is eye opening. This is, in fact, very stimulating because Cantonese food has such a long history and top chefs in Japan are now very interested in this cuisine, apart from watching French and Italian food.” 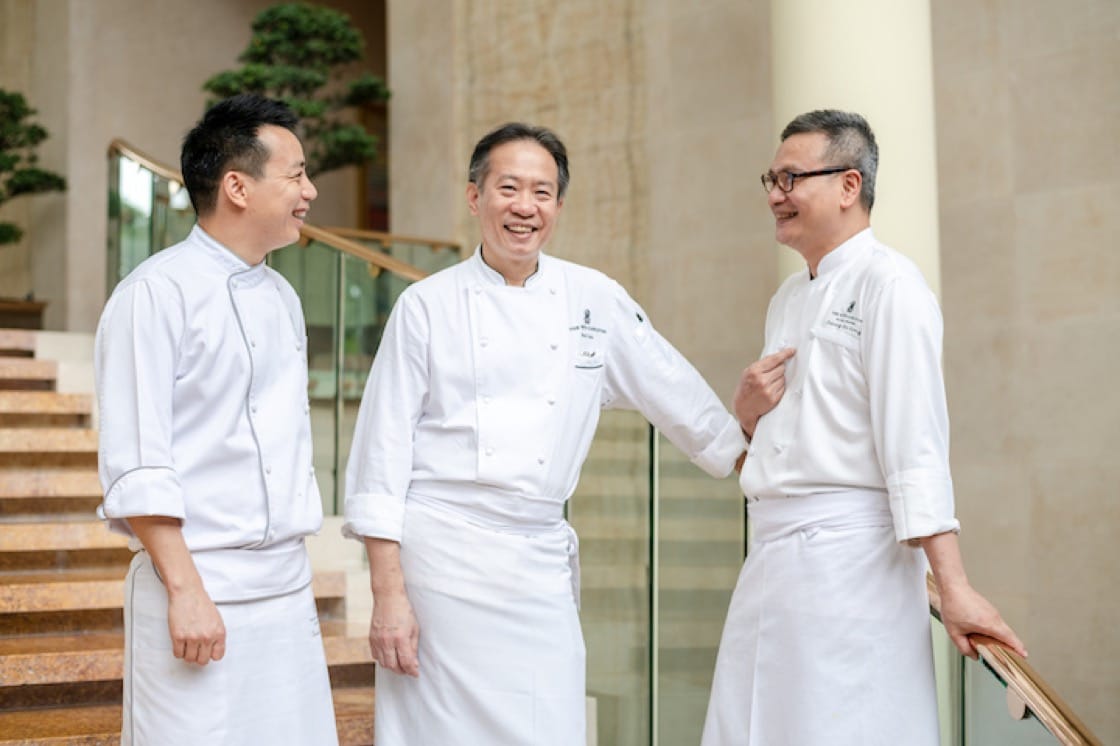 Earlier that same month, Lau, a veteran with more than 40 years of culinary experience, had a taste of being the guest chef in Singapore. From 1 to 4 November, he and his assistants had helped kick off the Stellar Dining Series at The Ritz-Carlton, Millenia Singapore. The series next went to Osaka, before moving on to Hong Kong and its final stop, Beijing, with each stop showcasing the different chefs from Michelin-starred establishments of The Ritz-Carlton hotels.

Bruce Ryde, The Ritz-Carlton’s Vice President, Luxury Brands and Brands Management, Marriott International Asia Pacific, shared: “Based on the success of the Food and Wine festival organised by individual Ritz-Carlton hotels over the last few years, we saw an opportunity to take our dining experiences to the next level. The Stellar Dining Series was born out of the idea that The Ritz-Carlton could set another standard in the fine-dining space — where culinary craftsmanship is paired with legendary service.” 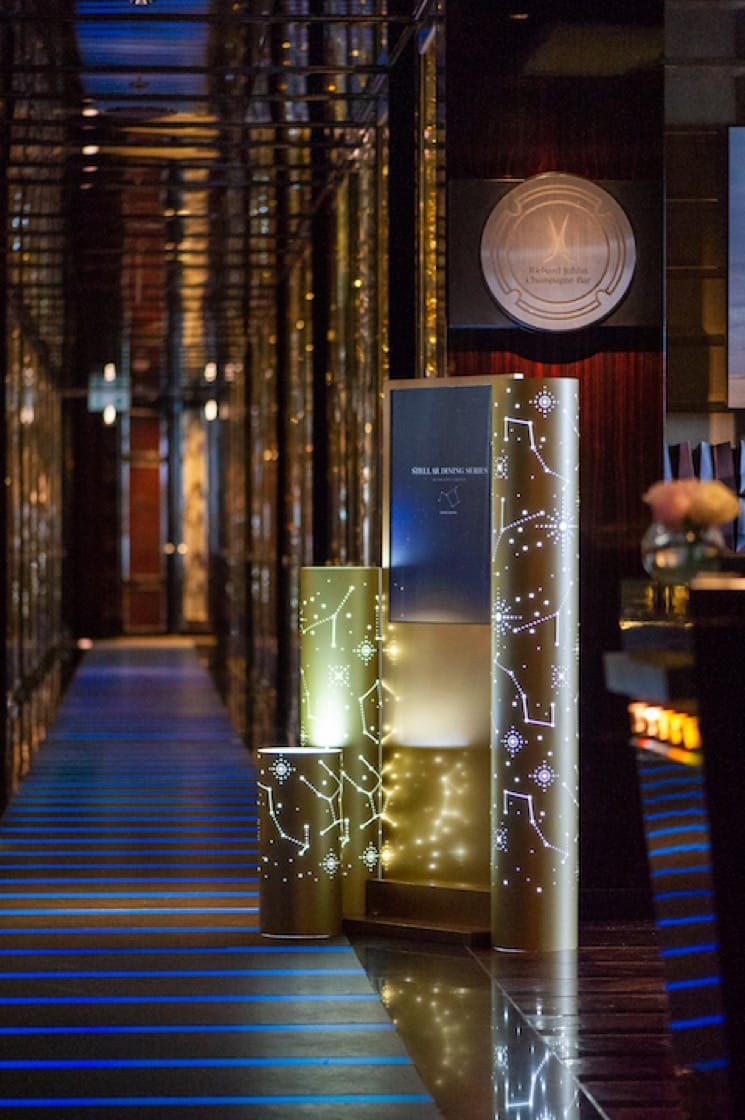 This month-long celebration showcases restaurant and bar teams which have amassed Michelin Stars and countless accolades between them. Marriott Rewards Members could use their points to redeem or bid for a special culinary journey that would take them to all four cities to experience the Stellar Dining Series, including a night’s stay at each destination.

Like a few other hotel brands which have rolled out similar dining programmes, The Ritz-Carlton aptly built on the positive brand image of the Michelin-starred restaurants within the group. Ryde’s team came up with a lovely narrative of likening these beautiful starred restaurant experiences to “rare cosmic events, which are awe-inspiring and celebrated”.
Ryde said: “This campaign is really to highlight the rare (Michelin) star alignments that can be experienced for a limited time and at a specific location only, to build excitement and anticipation from our guests.”

For the record, The Ritz-Carlton in Asia-Pacific now has nine Michelin stars under its belt awarded to eight restaurants across seven properties in the region.

The dining series can also be seen as another platform to showcase Ritz Carlton’s signature service standards, expressed creatively through epicurean artisanship, creative mixology and handcrafted gourmet dining experiences and masterclasses, delivered by The Ritz-Carlton’s culinary talents, to tie in to the brand’s vision of inspiring life’s most meaningful journeys. 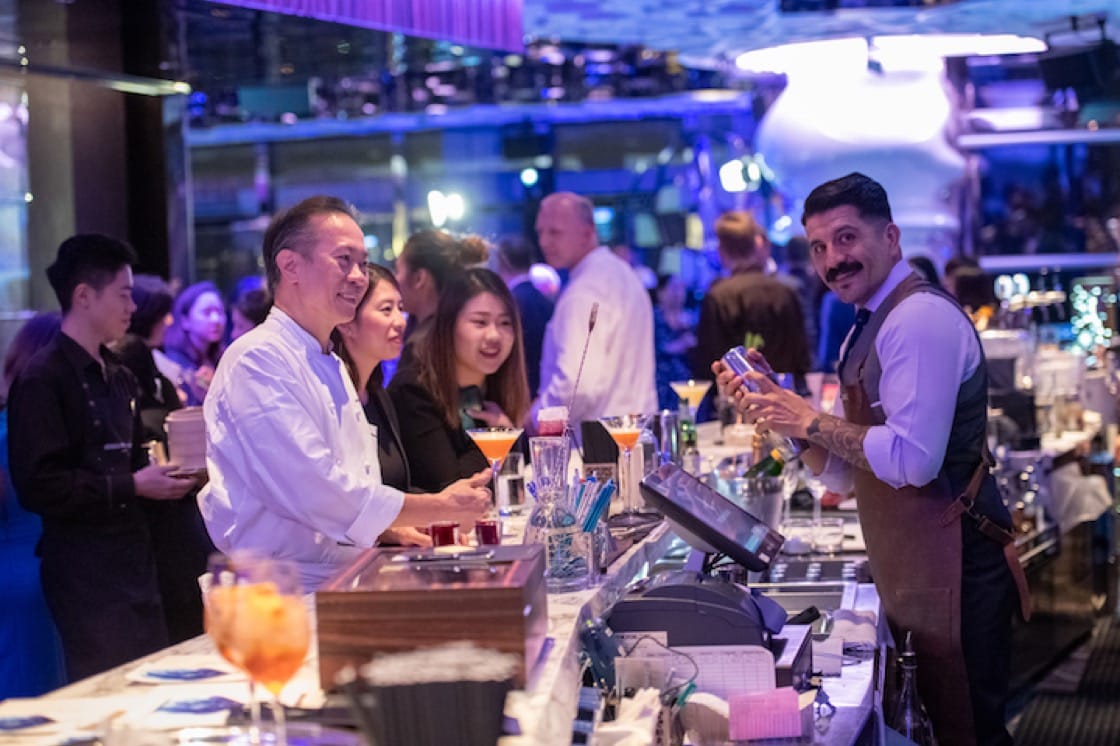 Chefs, mixologists and pâtissiers from the Ritz-Carlton toured gourmet cities in the region.
For this purpose, The Ritz-Carlton brand team, in collaboration with the culinary team in Asia-Pacific, designed a month-long celestial journey of four gastronomic festivals, featuring an alignment of six chefs from Michelin-starred establishments and seven talented mixologists and pâtissiers, who toured gourmet cities in the region.

Each destination offered a portal into the world of The Ritz-Carlton’s Michelin-starred restaurants and bars, where collaborative menus are created by the celebrated chefs from Hong Kong, Tokyo, Kyoto, Osaka, Singapore and Guangzhou, and where guests can participate in exclusive masterclasses and satellite workshops. 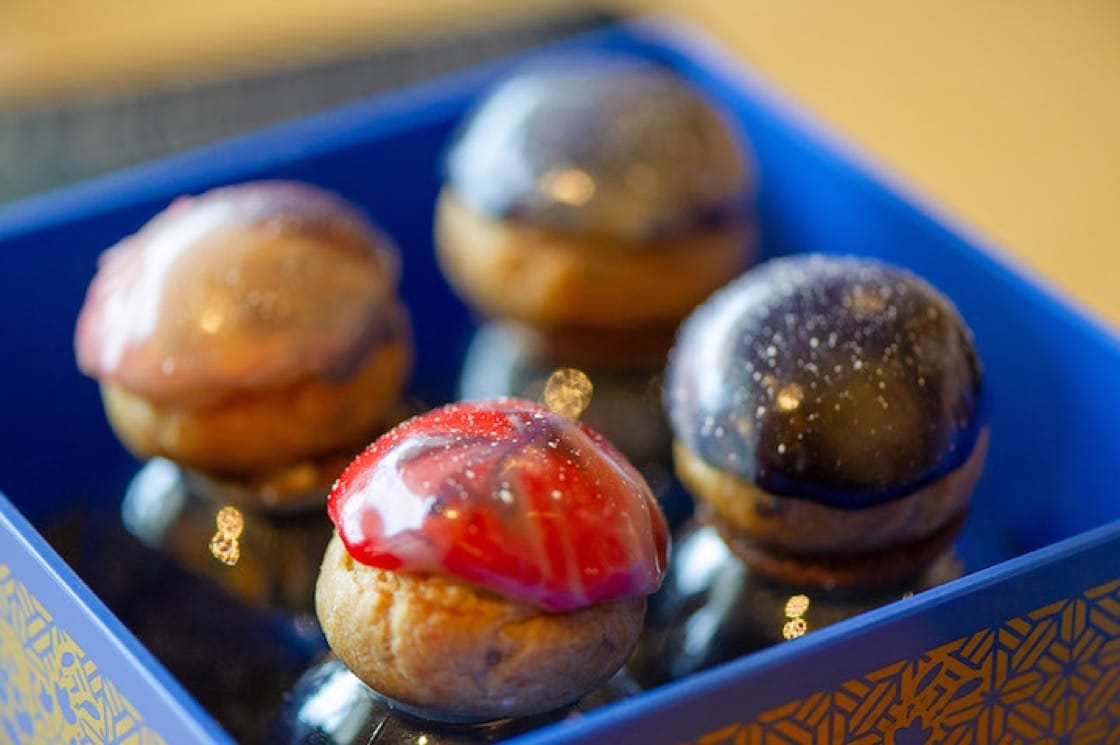 A visually-stunning afternoon tea at The Ritz-Carlton, Millenia Singapore.
Many Cooks In The Kitchen

When the Stellar Dining Series kicked off at The Ritz-Carlton, Millenia Singapore at the start of November, guests in Singapore enjoyed a six-hands collaboration that offered a harmony of the best Cantonese dishes from chef Lau of Michelin-starred Tin Lung Heen at The Ritz-Carlton, Hong Kong; chef Gordon Guo of Lai Heen at The Ritz- Carlton, Guangzhou; and chef Cheung Siu Kong of the Michelin-starred Summer Pavilion in The Ritz-Carlton, Millenia Singapore. Celebrated patissier Richard Long from Hong Kong also came up with a visually stunning afternoon tea, while mixologist Mena concocted a series of cosmic cocktails. 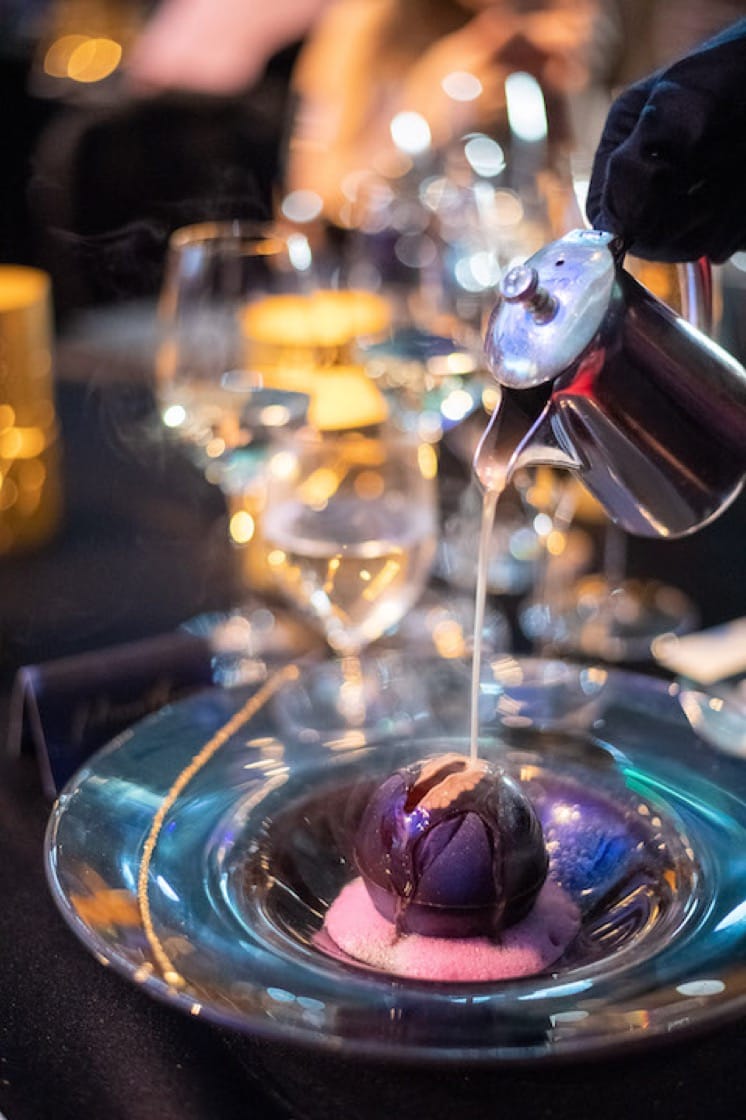 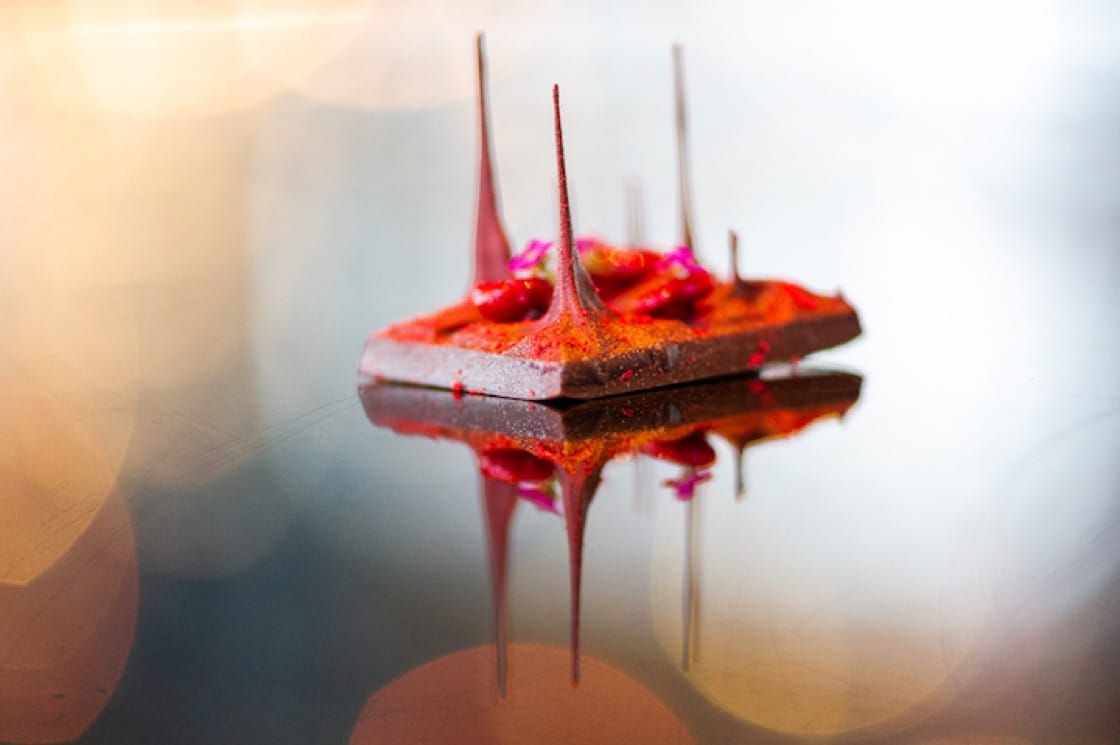 A gravity-defying creation by master chocolatier Masatada Hosokawa.
The final stop will conclude this weekend at The Ritz-Carlton, Beijing, where chef Gibert of La Baie in Osaka and chef Cheung of Summer Pavilion in Singapore will create a haute French experience and a contemporary Cantonese menu. Additionally, there are exclusive cocktail workshops inspired by China’s treasured teas. 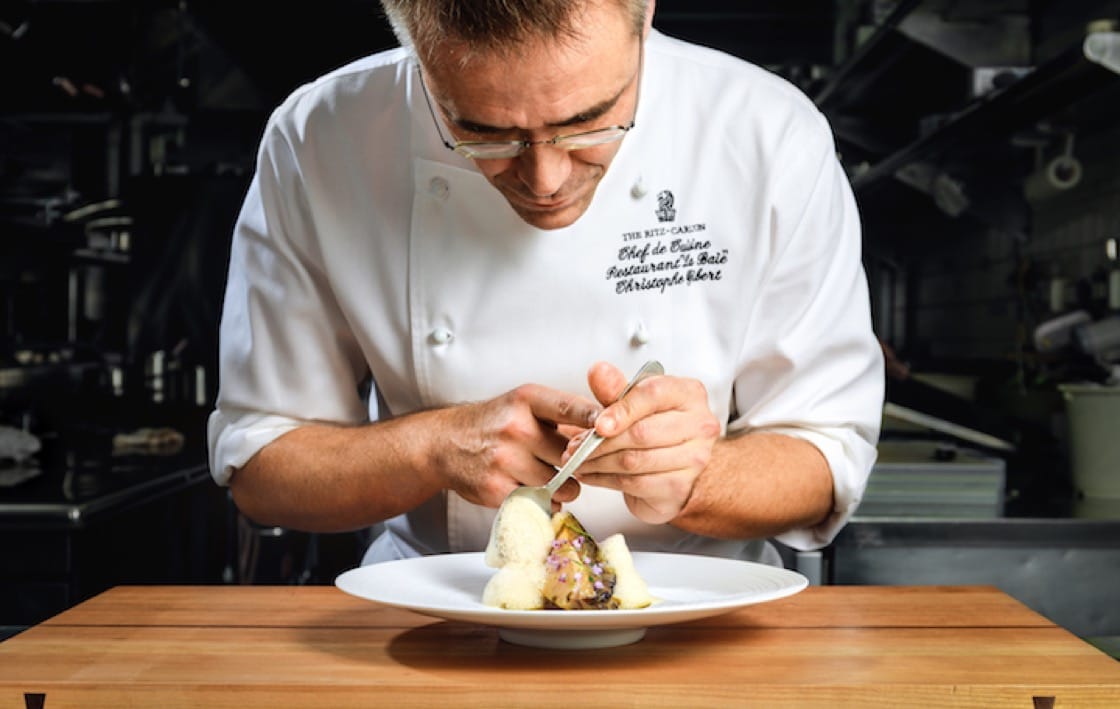 Christophe Gibert of La Baie at The Ritz-Carlton, Osaka.
“The objective of the Stellar Dining Series is to drive greater awareness of the brand’s leadership in Michelin-starred dining experiences across Asia-Pacific, through handcrafted gourmet experiences created by The Ritz-Carlton’s culinary talents,” said Ryde. “The long-term objective is to create inspiring stories that enhance the reputation of the brand in curating exceptional dining experiences through epicurean artisanship, creative mixology and legendary service.”

A logistics nightmare for the hotel group, these gastronomic journeys relied on the participating hotels’ full support, including seconding chefs to sister hotels, hosting media amidst the festive season and timing the events so as to capture the most number of Michelin-starred restaurants in the region. The series also took into account that Lai Heen of The Ritz-Carlton, Guangzhou has a newly minted Michelin star, which was awarded in the inaugural MICHELIN Guide Guangzhou in late June. The series got off with a rousing start and all the planned events were quickly sold out. Besides the fine-dining experiences enjoyed by guests, the chefs also reaped their own rewards in terms of inspiration. 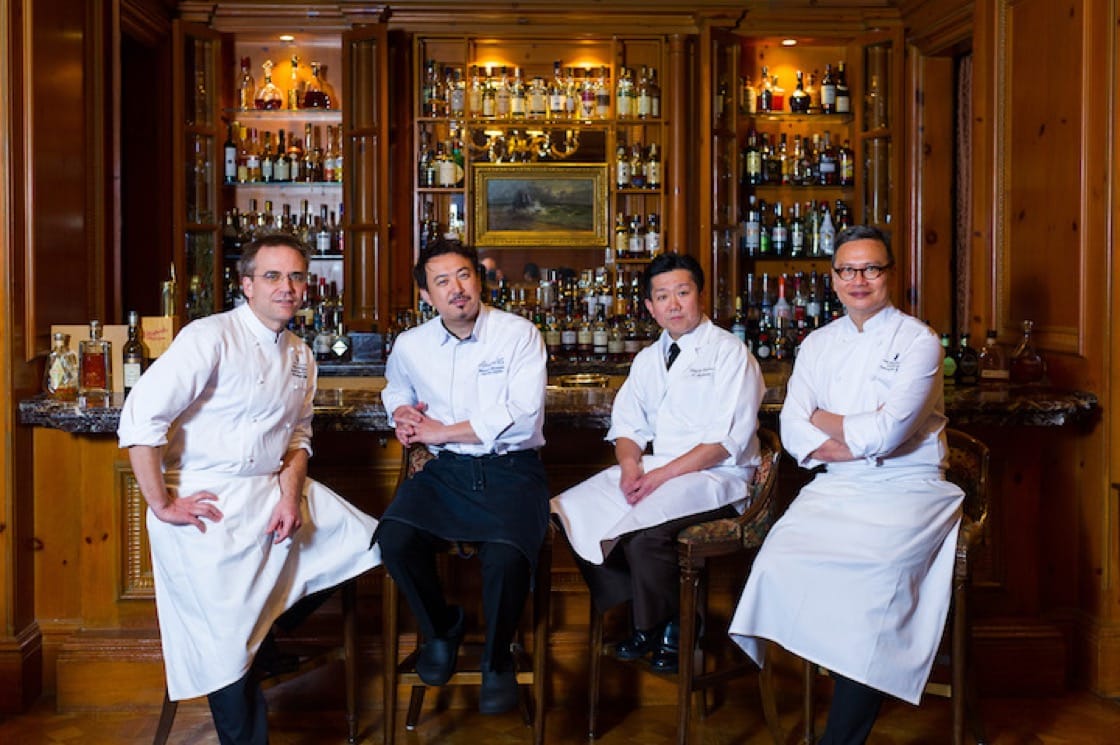 Chef Cheung (far right) with his colleagues in Osaka.
Chef Cheung of Summer Pavilion from The Ritz-Carlton, Millenia Singapore noted: “A six-hands menu has its challenges because chefs have different styles even if we are all presenting Cantonese food. There is little time to meld our thoughts, but we made the best out of it and these sessions are all very enriching. I learnt a lot myself in the process and derived lots on inspirations watching Chef Lau and Chef Gordon Liu in the kitchen.” 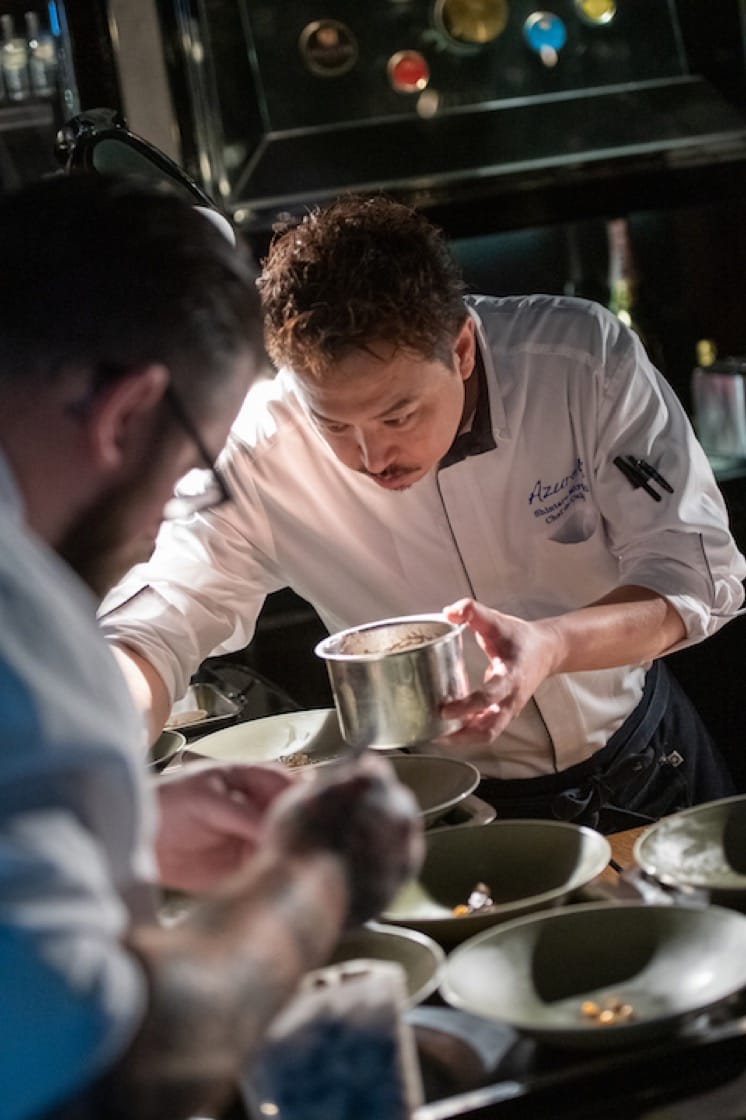 He had also observed first-hand the Japanese work culture and ethics in the kitchen while working with his counterparts in Osaka. He added: “I saw how seniority mattered and how junior chefs are all very respectful of seniors in the kitchen. It was really an eye-opener for me.”

He felt that the Stellar Dining Series is helpful in elevating the stature of The Ritz-Carlton hotels and their commitment to crafting unforgettable dining experiences. In addition, it showcases restaurants and chef talents within the group to a wider geographical audience.

And whilst being in another’s kitchen in a new environment can be challenging, chef Lau said the plus point was gleaning new ideas from working alongside his counterparts. “These exchanges within the group also help open up the mind, challenging chefs to push boundaries and do great food.”
He added: “When you dine and sample another chef’s menu, you taste the intricacies of flavour and learn to appreciate the chef’s work. But when you get the opportunity to work with him in the kitchen, you get a sense of how this all is put together. You see the techniques to realising a dish. This is awesome for a chef.”