Prized for its pleasant lifestyle and rich heritage, Ljubljana is also a paradise for food lovers : in 2021, the capital of Slovenia had no fewer than 17 restaurants singled out by the MICHELIN Guide. When you delve into this selection, you might be surprised by its diversity ; from traditional eateries and creative bistros to fine dining restaurants, there is something for every taste. This eclecticism is also reflected in the types of cuisine that have been made the cut – these range from local specialities to Italian recipes, from Japanese classics to fragrant Thai dishes. Here are four places that encapsulate the vitality of Ljubljana's restaurant scene.

B-Restaurant: influences from far and wide

Perched on the 20th floor of the Intercontinental Hotel, B-Restaurant's primary attraction is its exceptional location. Looming over the city, this vast contemporary space boasts an unforgettable panoramic view that stretches from Ljubljana Castle to the snowy peaks of the Julian Alps. The dining area, furnished with comfortable chairs and sofas, also overlooks the kitchen where you can glimpse the team of chefs busy working. Considering the size of the establishment, the atmosphere is remarkably friendly.

The Intercontinental Hotel hosts guests from all over the world. To cater to their needs, the restaurant serves modern and eclectic cuisine, tweaking international classics with more local flavours. For example, Istrian truffles accompany the fuži pasta, and the chicken from Ptuj – a town in the northeast of the country – is served with cheese-filled štruklji. Each guest gets to take a tasty memory of Slovenia away with them.

The menu was designed by Komnen Bakić, with the goal of pleasing everyone. The name of the restaurant, "B", was chosen in reference to the bees in the restaurant's hives. Executive chef Komnen Bakić deftly manages the day-to-day running of the restaurant, which has become a firm favourite with Ljubljana's foodies. The wine list is just as outward looking as the menu, while encompassing a wide selection of Slovenian wines, too. These are also served at the adjoining cocktail bar. 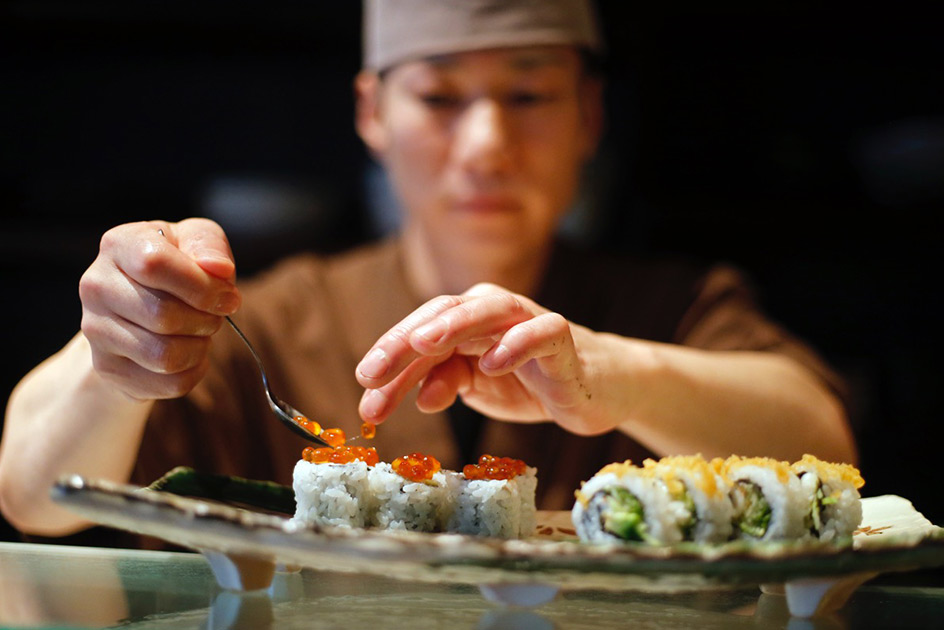 Sushimama : a trip to the land of the rising sun

Sushimama is the best Japanese restaurant in Slovenia. It lies just a stone's throw from the famous Triple Bridge, in one of the main pedestrian streets of the capital. Its interior adheres to all the traditional Japanese style rules: a preponderance of wood, and views onto the open kitchen and the cooks in action. However, one concession that has been made to Western comfort is the presence of soft benches and chairs.

What has distinguished Sushimama since the start is that all of its chefs are Japanese. Today, master sushi chef Hiroki Ishikawa is assisted by a young apprentice, to whom he is patiently passing on all his techniques. Originally from the Japanese prefecture of Saitama, Hiroki worked in his family's restaurant for a long time, before heading overseas. With stints in Spain and Italy under his belt, he had developed a liking for European life and decided to settle in Slovenia.

Owner Grega Božičnik opened Sushimama about 20 years ago. At the time, he was one of the first to bring Japanese cuisine to Slovenia. The restaurant is open all day long and has a considerable following of regulars who cannot get enough of the fresh sushi and sashimi. Salmon, tuna, sea bass, shrimp, eel, mackerel and octopus – it's all prepared in line with Japanese practices, without unnecessary embellishments.

While fish is the mainstay of the menu, there are also a few meat dishes, as well as noodles, such as soba (buckwheat) and udon (wheat). The pleasant surprise is that the restaurant also has almost 200 different wines on its list ! For dessert, try the delicious cakes or ice creams from Fetiche, a pastry shop also owned by Grega. 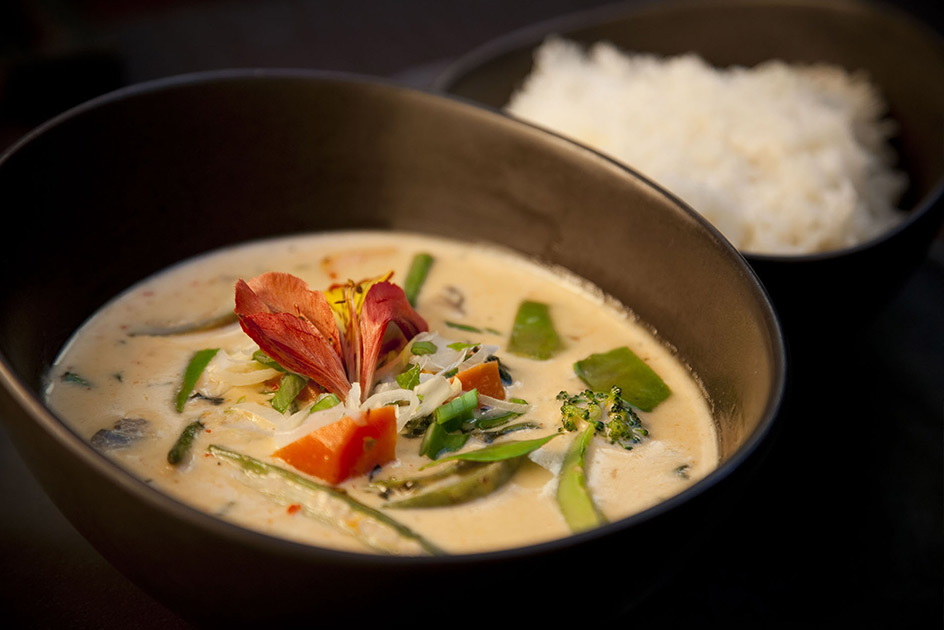 This place is quite a well-kept secret, tucked away in the narrow, colourful street of central Ljubljana. Behind the sturdy walls of a 17th-century palace, Shambala occupies a large space divided between a delightful arcaded patio, a cosy bar and a leafy garden. The whole place belongs to the Pavšič family, who founded the establishment over a decade ago with the aim of sharing their penchant for the flavours of Asia.

Florijan Virant, currently Shambala's chef, has been working here for many years. You could say he learned everything on the job, gradually working his way up. Dedicated to his work and very attached to the spirit of the place, he is always on the lookout for new ideas. Drawing on his wealth of experience and his library of beloved cookbooks, he is not afraid to experiment with new recipes, which he and his team spend weeks honing before adding them to the menu.

The exotic ingredients needed for Virant's tasty well-spiced cuisine come directly from various Asian countries such as Vietnam, Thailand and Japan. The signature dishes of the house are crab in a pepper sauce, Angus beef marinated in lemongrass and Thai curry - green or red - prepared to a secret recipe containing almost 15 herbs and spices. And to accompany your food, Shambala has a predilection for Slovenian wines, especially those with aromatic profiles such as Riesling or Rebula. 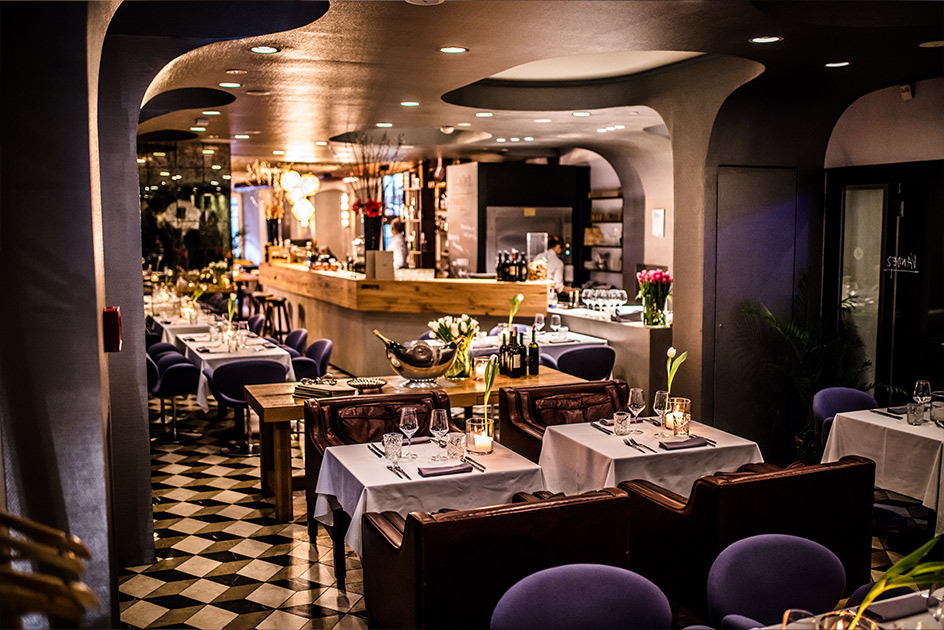 On the banks of the Ljubljanica River, city-centre restaurant Vander stands out from the crowd with its inviting and trendy atmosphere. Within the walls of Amanda and Aleksander Vujadinović’s attractive boutique hotel, the restaurant is divided into several interconnecting spaces: one cosy room with large communal tables, another with a more elegant vibe and designer furniture, plus an irresistible sun terrace on the waterfront.

In Slovenian, Vander means "journey", and the name is spot on for this establishment, where a different culinary experience awaits you each time you come : the two young chefs are keen to keep diners on their toes. They are Martin Blejec, who has worked in some of the best restaurants in Ljubljana and London, and Luka Zeleznik, sous-chef and friend of Blejec.

Both are keen to work with local produce, which they source from small-scale producers of their acquaintance. Farm-reared pig, trout or sturgeon, game and mushrooms all feature on a menu that favours compact, lively dishes. Examples include the delicately breaded Dolenjska cheese served with herb mayonnaise; scallop risotto with caramelised spring onions; and crispy pavlova with seasonal fruits.

The wine list highlights local wines but also includes foreign wines, most notably champagne, which flows freely during the many events in the Vander calendar. These range from "Vanderful" aperitifs to gourmet evenings, and offer the perfect opportunity to book a night in one of the hotel's elegant guestrooms.