August 8, 2019, marked the 40th anniversary of Jean-Louis Palladin's arrival to Washington, D.C., where he opened his eponymous restaurant at The Watergate Hotel—yes, that hotel—in December 1979. In honor of the occasion, chefs Jacques Pépin, Jimmy Sneed, Larbi Dahrouch (the latter two being Palladin's former sous chefs) and Sébastien Giannini (executive chef of Kingbird, the hotel's current restaurant) gathered to put on a dinner to celebrate the influential Palladin.

Palladin is revered by many within the culinary community, including the likes of Daniel Boulud and Eric Ripert, but is relatively unknown by the general public, even as chef-obsessed as our culture currently is.

Palladin was born in southwestern France in the small town of Condom in 1946. After culinary school and working in restaurant kitchens elsewhere, Palladin's first claim to fame was earning two MICHELIN stars for La Table des Cordeliers in his hometown in 1974. Yes, two MICHELIN stars is a feat within itself, but to achieve such a feat at just 28 years old made Palladin the youngest chef to ever do so at the time. 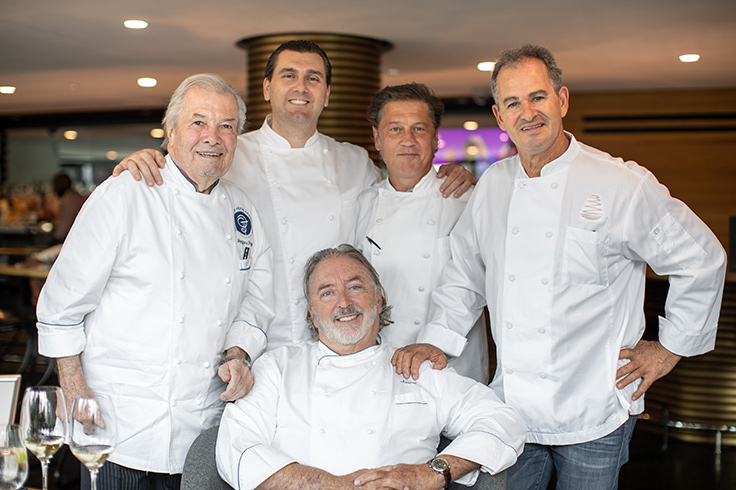 With this on his resumé, Palladin was wooed to the United States and opened Jean-Louis at the Watergate in 1979. Aside from his mastery of the culinary arts, what truly set him apart was his embrace of American ingredients, something that many other of his French contemporaries pooh-poohed. Palladin was allegedly the first chef to work with farmers, fishers and other suppliers to source the quality of ingredients he demanded. From convincing a then marine-biology student named Rod Browne Mitchell (founder of Browne Trading Company) to don a scuba suit and dive for scallops, to teaching John Jamison (of Jamison Farm in Pennsylvania) to feed lambs garlic grass for impeccable flavor, Palladin was the father of the farm-to-table phenomenon that is ubiquitous is restaurants across America today.

RELATED: The History of Washington D.C.'s Dining Scene
Palladin passed in November 2001 at the age of 55 after battling lung cancer. Hoping to cement Palladin's status as the culinary titan he is, his daughter, Verveine, is in the process of reviving a documentary project spearheaded by executive producer Suzi Bittles. The working title is "In Search of a Legendary Master Chef, My Father, Jean-Louis," and per film materials, "Now almost 18 years after his death, as a grown married woman with two children of her own, Verveine Palladin begins her committed journey in search of her father's legacy as one of the most important influences on 20th century American culinary culture."

The film is still in development, so until then, below are Jimmy Sneed and Sébastien Giannini on the impact of Palladin on their own careers and the culinary world at large. 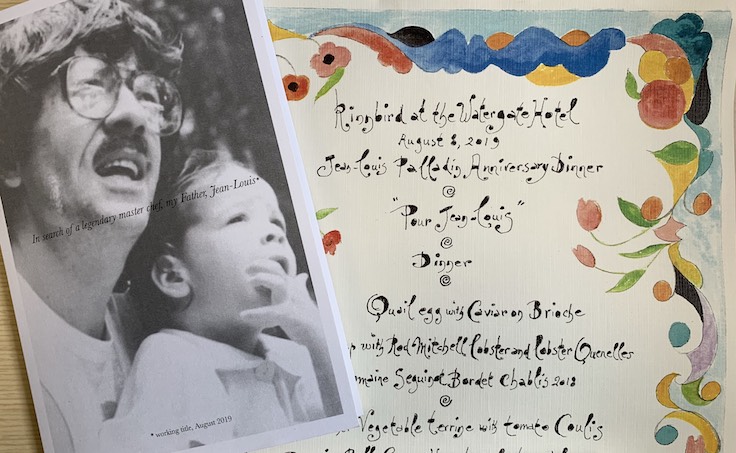 When and how did you first meet Jean-Louis Palladin?
Jimmy Sneed: I first met Jean-Louis Palladin in 1980. To be perfectly honest, at the time, I was looking to leave another job I had in D.C. as a sous chef—and I knew, on some level, that I really didn't know how to cook very well. So, I decided that I was either going to find a cooking master to train with, or I was going to leave the industry altogether. So, I drove to the French Ambassador's residence and I asked to speak with the chef there. Once I was able to speak with him, I told him that I was looking to work with a true, authentic French chef, and he mentioned that his best friend was Jean-Louis Palladin at The Watergate Hotel! He then proceeded to advise me to drive over to The Watergate Hotel and introduce myself—so that's exactly what I did. I still remember, when I arrived, Jean-Louis Palladin and his sous chefs were driving motorcycles around the parking lot! Haha. I followed them into the kitchen, and Jean-Louis Palladin asked me if I spoke French, to which I replied, "Yes." He then told me he didn't have a job for me at the time, but a few days later he called to offer me a position in his kitchen. Ironically, by that time, I had actually just accepted a job at the Four Seasons in D.C.—but as luck would have it, I got back in touch with Jean-Louis Palladin about a year and a half later, in June 1982, and that is when I first began working for him.

What memory of him stands out the most?
Sneed: Everyday with Jean-Louis Palladin was an adventure—good or bad. One thing really stands out in my memories of him, though. It really speaks to the core of who he was: We had gone to do a dinner near Hollywood—I think it was at the Beverly Hills Hotel—and moments after we were done putting out the dinner for 180 people, Jean-Louis Palladin grabbed a plastic bucket with soapy water and started scrubbing the hotel stove! In that moment, it showed me precisely that he was a true a cook's cook—he was not a high-maintenance chef in the slightest. He was the real deal. He knew his job was to prep and cook all day, clean up, and then go home—and he embraced every bit of it.

What is it like following in his footsteps at The Watergate Hotel?
Sébastien Giannini: I am very proud to now serve as the executive chef at The Watergate Hotel's premier restaurant, Kingbird, because in this precise location, Jean-Louis Palladin did so much for the culinary scene—not only in Washington, D.C., but in the United States. I am incredibly honored and grateful to be part of the legacy of Jean-Louis at the Watergate. Forty years after he first arrived here in Washington, D.C., I am humbled to represent the new generation of French-born chefs in the United States.

Why do you think Jean-Louis Palladin never achieved the same level of celebrity as his contemporaries?
Giannini: For me, being a chef does not mean having to achieve any level of celebrity status, because, at the end of the day, it's about providing the next generation the proper tools and knowledge they need to carry on in their careers—and thus, leaving behind your own legacy with them. That is what I firmly believe, and I feel like Jean-Louis Palladin felt the same way. What matters most is how your peers see and experience the things you do while working side-by-side with them—it's not about the fame or what people on the outside, looking in, might believe.

Sneed: Jean-Louis Palladin never sought celebrity status—and, truth be told, his contemporaries were the great cooks of the world, and he achieved celebrity amongst them. He was never interested in going on TV, never had a plan for a cookbook, never had a plan for PR— he just wanted to cook, plain and simple. He did it for the love of the art. It's hard work to be in the kitchen day in and day out, and there was nowhere he'd rather be.

What is the legacy of Jean-Louis Palladin?
Giannini: Jean-Louis Palladin brought the culture of cooking—and what he was used to—from France to Washington, D.C. That was his legacy. That is to say, back in France, it was common and everyday practice for chefs to get their products directly from the source, and showcase those items—and that's exactly what Jean-Louis Palladin did here in Washington. With incredible passion, Jean-Louis Palladin believed in the importance of working with a given product during the right season. With the best and proper ingredients, something simple can be utterly exquisite, because, with the simplicity, there is so much energy and elegance that it becomes art.

Sneed: Jean-Louis Palladin was a person of huge talent and huge personality, who came here just at the right time to influence the direction of the newly-emerging modern American cuisine. That is his legacy!

While it's true that he cooked with ingredients such as foie gras, truffles and caviar, Jean-Louis Palladin's food was more down-to-earth and accessible than that. He wanted you to put a bite of food in your mouth and think, "Wow that tastes great!" So many chefs today want to impress you with a long list of unique ingredients, but he just wanted every bite to have a wow factor! He used the best garlic, the best oil, the finest ingredients he could find—so they would taste just great! He was curious about new products and had the talent to make them shine.

Hero image courtesy of "In Search of a Legendary Master Chef, My Father, Jean-Louis"/Facebook.