The Best Bars in New York City According to NYC Bartenders

Insider tips on drinking in the Big Apple.

Deciding where to drink in New York City can be daunting, and to say that the city’s list of bars worth seeking out is extensive, is to put it mildly. Across five boroughs, New York has some of the most inventive, cutting-edge bars in the country—possibly the world—which seem to expand endlessly.

To help determine the most essential bars to drink at for locals and visitors alike, we consulted the experts. Here, five bartenders weigh in on their favorite spots to drink when they’re not behind the stick. From secret speakeasies to top-class mixology bars to tiki hideaways, these are the best bars in New York City according to New York bartenders. 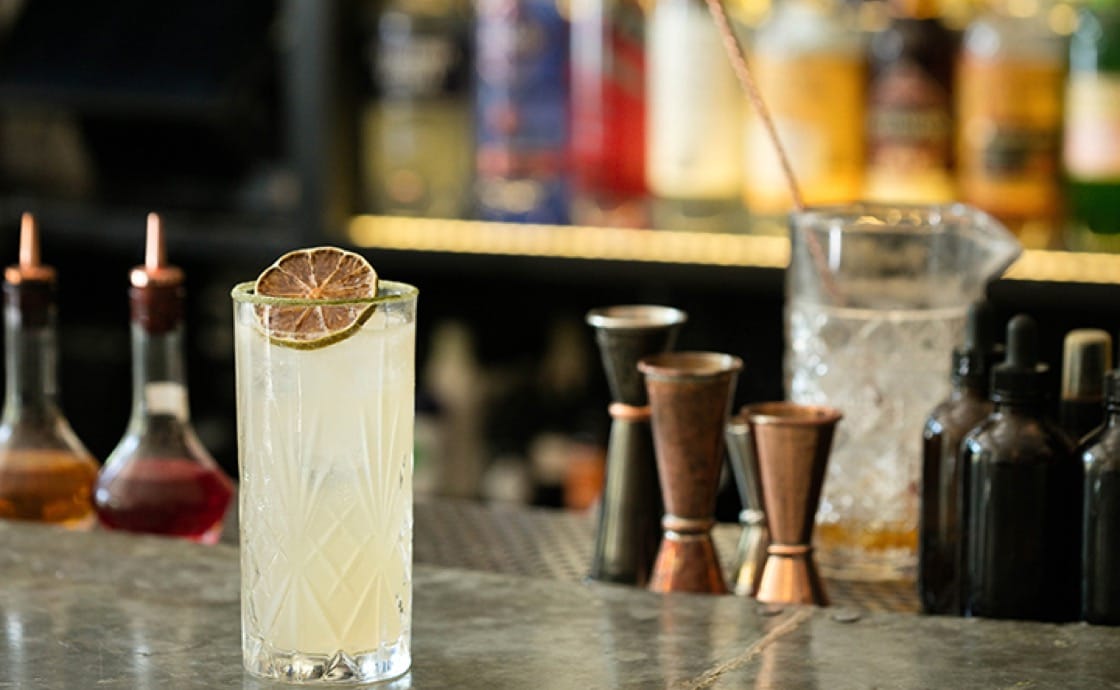 Pomona head bartender Mario Castro heads to Mace in the East Village for his after-work beverage. (Photo by Melissa Hom.)

Mario Castro, the head bartender at Pomona, a new American restaurant and bar in the Plaza Hotel (underneath the famous Paris Theater), favors East Village cocktail mecca Mace for his after-work beverage. “Arnaud [Dissais] makes some of the most inventive cocktails [in the city],” says Castro. “My favorite drink right now is the Cilantro, which is essentially a carbonated milk punch.”

If Castro isn’t in a hurry, he likes to go to Diamond Dogs in Astoria, Queens. He says that while the bar is out of the way for some, their Mezcal-based Paper Plane and ever great playlists are well worth the trek.

Antanas Samkus, the head bartender at The Beatrice Inn, believes that the city’s best bar is hidden away inside of one of the city’s best restaurants. "Blue Hill has an amazing bar program that nobody really knows about,” he says. “They not only use seasonal ingredients, they also use odds and ends (the scraps) from the vegetables on the food menu.” On the current iteration of the menu, Samkus says he’s been ordering the Over the Influence, which is made with 898 squash-infused rum, apple jack, black walnut and egg white. “It is totally different than what I make at my bar and that’s why I like to go there.”

For head bartender Sean Saunders—who just opened cocktail haven Devon in the Lower East Side—the two must-visit Big Apple bars are Subject and Bell Book and Candle. “[Subject] is always open late and the owner Brian is one of the sweetest humans I've ever met in my life.” says Saunders. “Bell Book and Candle has a beautiful Sunday celebration with an incredible [live] band that makes me feel like being back home.” (Saunders is from Saratoga Springs, New York.) 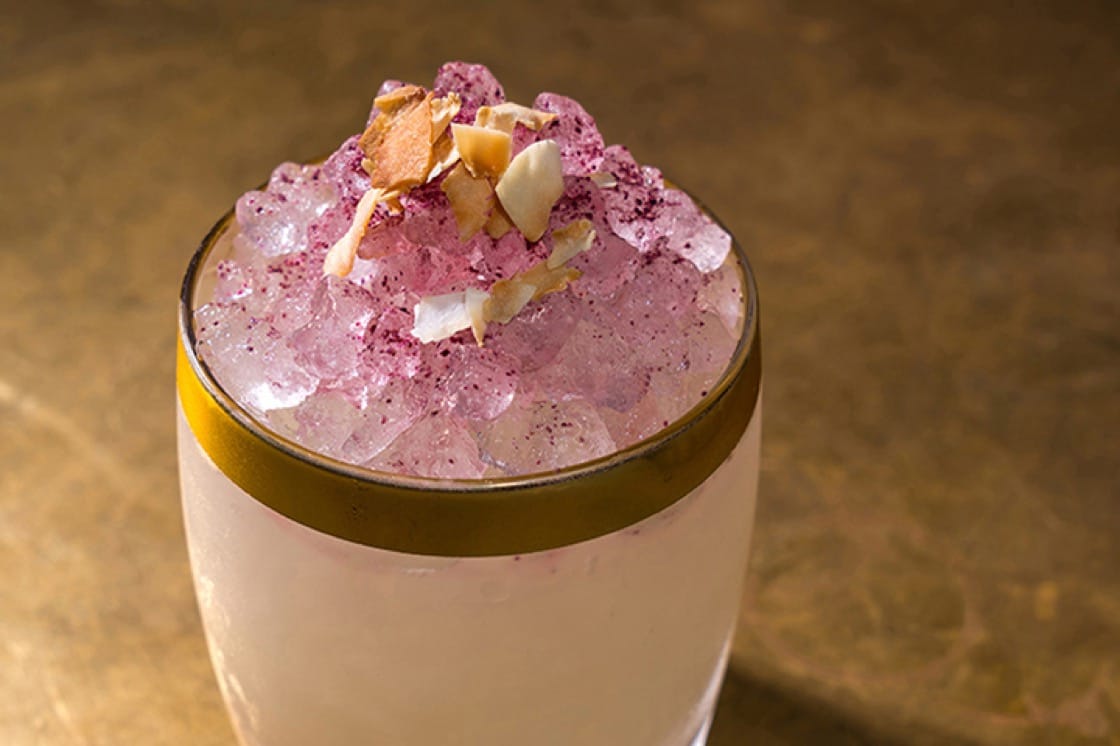 According to Karen Lin, the general manager and beverage director at SakaMai and Bar Moga, one of her favorite bartenders to visit is Nana Shimosegawa at Katana Kitten. “She’s such a badass,” says Lin. “Not only is she very intuitive towards her guests, she always remembers [their] likes and dislikes when making customized cocktails.” Lin also notes that Shimosegawa has gone through rigorous training under Shingo Gokan, the bar manager of Angel’s Share—one of the most prestigious Japanese cocktail bars in the world. “You can tell from her technique and presentation that she’s fierce and won’t compromise anything that might affect her creations.”

Another favorite bar of Lin’s is Kaoru in Midtown East. Although she says it’s her “secret spot,” she didn’t mind sharing the off-the-radar location. “I was introduced to Mr. Sato and Kaoru through connections from the [bar] industry. Tomohiro Sato, the wine sommelier, is one of the most hospitable people I know in this industry. His drive to always learn more is something that I admire.”

Lin says that Karou also has a very unique atmosphere that is unlike anything most people have experienced in New York. “It has mismatched furniture and a grand piano. [Everytime that I’m there] I feel like I’m in a time vacuum. When you’re finally ready to leave, you realize the birds are chirping outside. The clientele here are mostly industry folks and regulars, so it feels like an alternate universe version of Cheers (it’s worth noting that they open at midnight). Another big plus is that they have a rotating list of chefs that come through to cook, so food is also offered for the weary restaurant staff after their shifts.”

Kieran Chavez, the beverage director at Spanish tapas bar Boqueria, has a long list of favorite bars in New York (it’s hard not to). But his choices are contingent upon what he’s in the mood to drink—or what the weather is doing outside. A few blocks from Boqueria’s newest location on West 40th St. is Keiran’s favorite tiki bar, The Polynesian. “I love a good Tiki drink and [every one of] these drinks are great,” he says. “This is the place to indulge—it’s guilty pleasure heaven. Pick your poison, every flavor is represented.”

When craving a fine glass of wine (or two), Chavez ventures to Brooklyn to enjoy the wide variety of options from the The Four Horsemen wine bar, which is owned by LCD Soundsystem’s James Murphy. “The wine list is constantly rotating,” says Kieran, “so the list is always interesting and challenging. I never know what to expect from the wines-by-the-glass [list]. Any order is a good one—and it’s never the same.”

Chavez’s two favorite cocktail bars, however, are Diamond Reef and Maison Première—both in Brooklyn. “I love the balance of thoughtful cocktails in a not-so-serious environment,” he says of Diamond Reef. “It always makes me happy.” He also notes that at Diamond Reef they’re all about having fun, which “lets you know that you’re allowed to have fun too.” His go-to drink order: the Peni-chillin, a frozen version of world famous bartender and owner Sam Ross’s renowned Penicillin cocktail, or the fresh-pressed apple juice with your choice of booze. “It’s brilliant and simple.”

For happy hour, Maison Première is Chavez’s top spot in the city. It's also one of his favorite places to bring others—especially if they’re visiting from outside of New York. “It is an easy way to please anyone you are with, regardless of whether they enjoy cocktails or wine, are there for happy hour or for dinner.” His personal favorite drink there—besides absinthe—is the bar’s take on the classic Mai Tai. “I’ve never had a better version or one more beautifully presented.”

When winter is in full effect and it’s especially frigid outside, Chavez’s go-to spot is Highlands, a modern take on a classic Scottish gastropub in the West Village. “The Scotch list is extensive and the staff are very knowledgeable.” he says. “It’s the kind of place you can cozy up all winter long. There is always a new Scotch to discover and the cocktails are great; they range from bright and refreshing to dark and boozy. It’s a gem.”