We devote a lot of time here to smaller hotels — true boutiques that are bursting with the hand-laid passion and personality of their creators. And that makes sense. A more intimate scale allows for more individual touches, and individuality is an easy thing to get exited about. But there’s a great deal to be said about larger hotels too, about the replication of process and perfection on a grand scale, about modern marvels that pulse with the energy of the people inside.

Sometimes you want to live like a resident of a place, folded into the quaint ebbs and flows of regular life, imagining yourself as a permanent fixture. Other times, you want to go big, wringing out every electric moment you can in your brief break from the everyday, knowing you’re surrounded by a surfeit of souls looking to do the same. Croatia gives you hotels for both experiences, although down along the country’s Adriatic coast you’ll notice the latter type tends to stand out — massive structures with mesmerizing rows of balconies engineered to ensure spectacular views from every room.

Contemporary tourism in Croatia is an interesting story. Decimated by war in the early ’90s, it took over a decade to crawl back to its pre-conflict peaks. Then it exploded, with the number of visitors doubling during the 2010s. Hotel developers, in order to keep up with the growing demand, almost seemed to skip past the smaller properties and went straight to building larger resorts. This is especially true on the western shoreline, a stretch that rivals nearly any other in terms of beauty and historical interest.

And what’s been built lately is impressive to say the least. The new mega-resorts join the new boutique hotels alongside the stately old villas, restored to their turn-of-the-century splendor and refreshed for the travelers of today. Here are some standouts in all sizes.

Dubrovnik, Croatia
Rixos Premium Dubrovnik stands on a cliffside overlooking the sea, a mile from the walled medieval old town, its rooms and suites cascading down the terraced slope like benches in a Roman theatre. It’s an impressive site, to be sure, and makes for impressive views — against such a backdrop, the hotel itself could get away with shirking some of its responsibilities, and it’s to its great credit that it doesn’t. 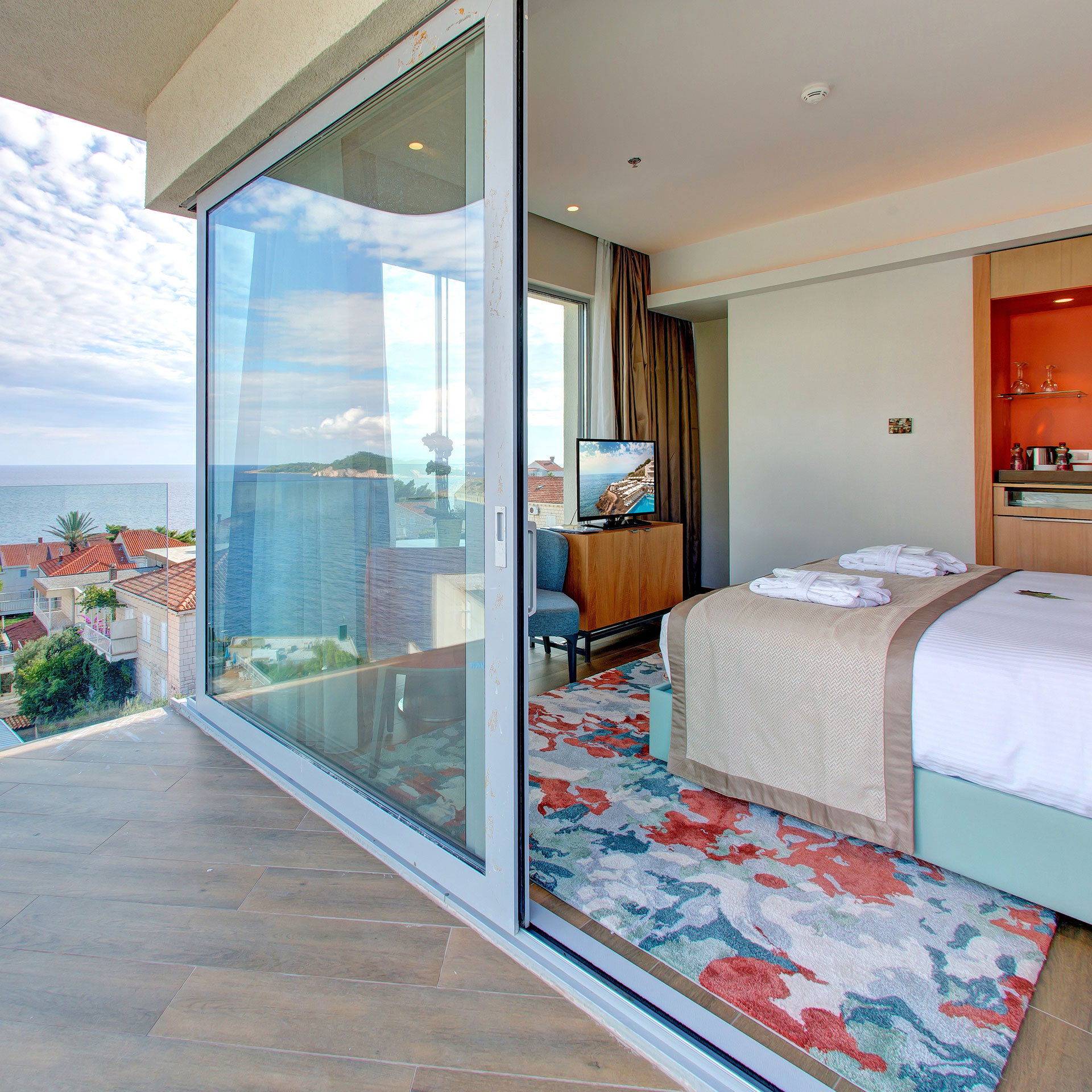 Dubrovnik, Croatia
Dubrovnik is blessed with more than its fair share of spectacular coastline, and the sunset-facing Lapad Bay, two and a half miles to the west of the historic old town, is like a mini-resort in the suburbs of the city — here you’ve got the promenade, the beach, some spectacular views of the Adriatic, and, presiding over it all, an impressive hotel in a minimalist contemporary style: Hotel Kompas Dubrovnik. 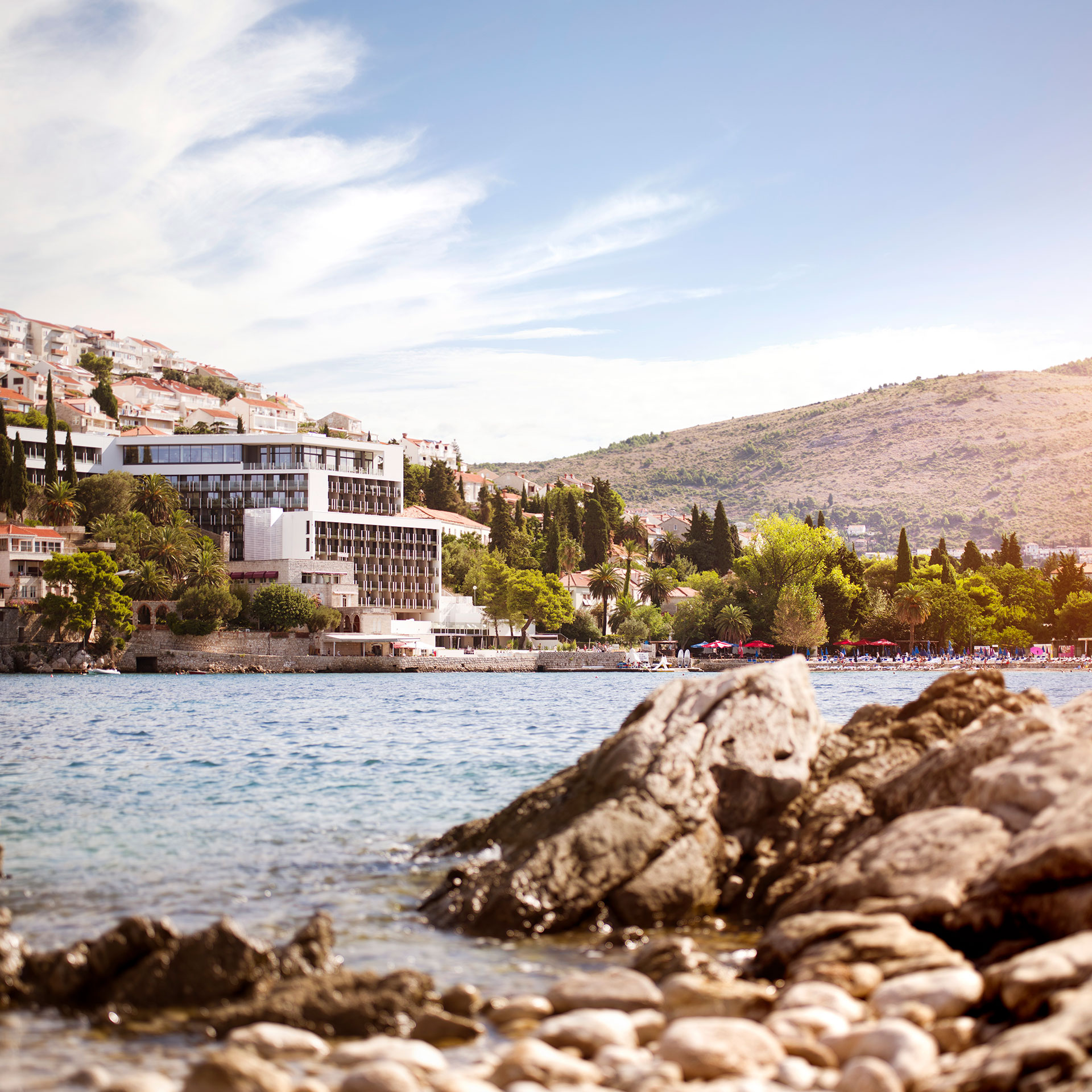 Dubrovnik, Croatia
The Croatian Riviera hasn’t been a Riviera for all that long, but Sun Gardens Dubrovnik ought to be all the proof you could want that things are moving along very nicely indeed. We’re not talking about some little villa with a pool on the terrace — this is a behemoth of a hotel, with four hundred rooms, suites and apartments, and no fewer than thirteen restaurants and bars. 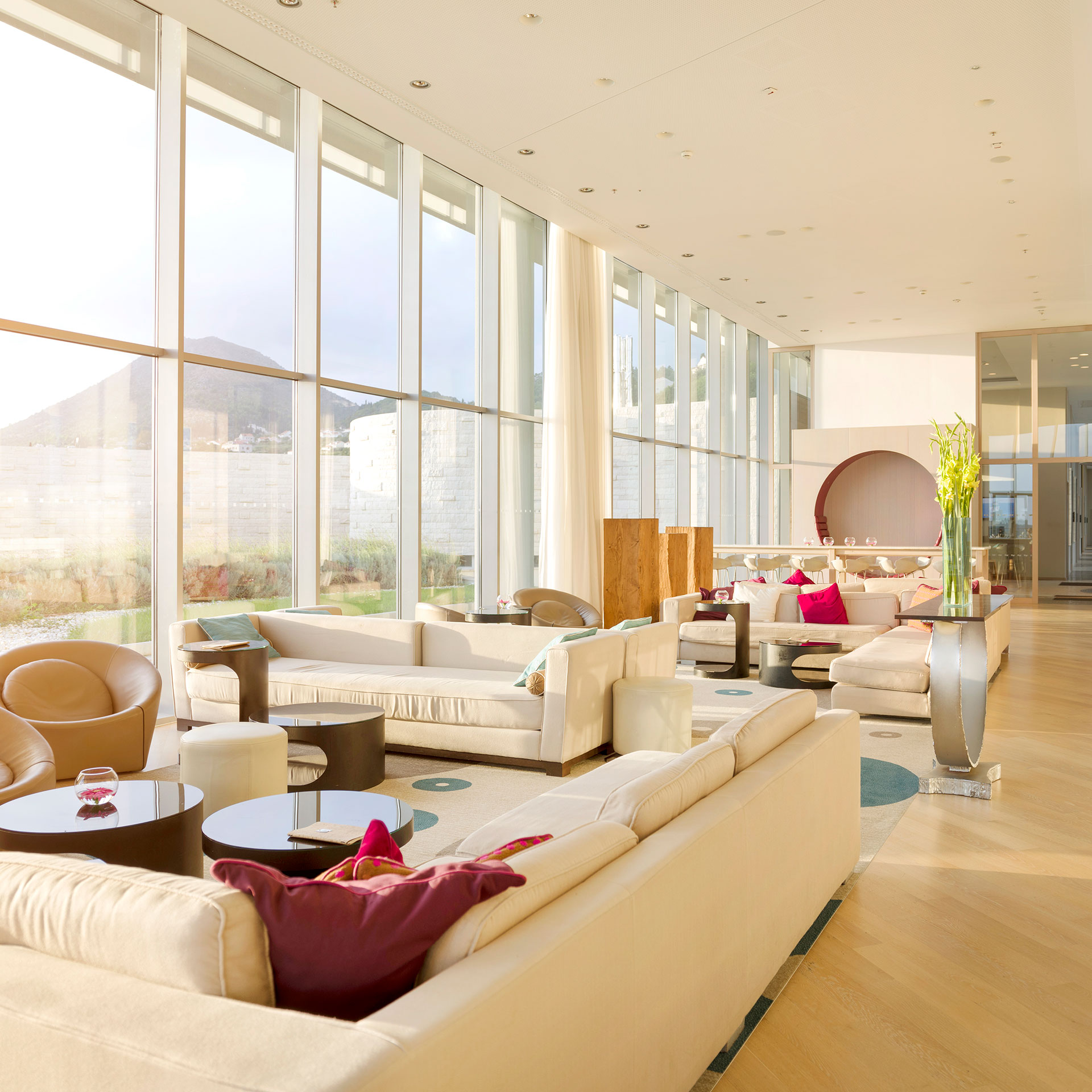 Dubrovnik, Croatia
A hotel called the Bellevue makes a certain implicit promise. And the Hotel Bellevue Dubrovnik, its glassy façade perched on a cliff above picturesque Miramare Bay, does not lack for scenery. One can gaze out at it from any of the ninety-one rooms and suites. The hotel is less than a kilometer from the 6th-century old city of Dubrovnik, but given the hotel’s setting and orientation, the water feels closer than the land. 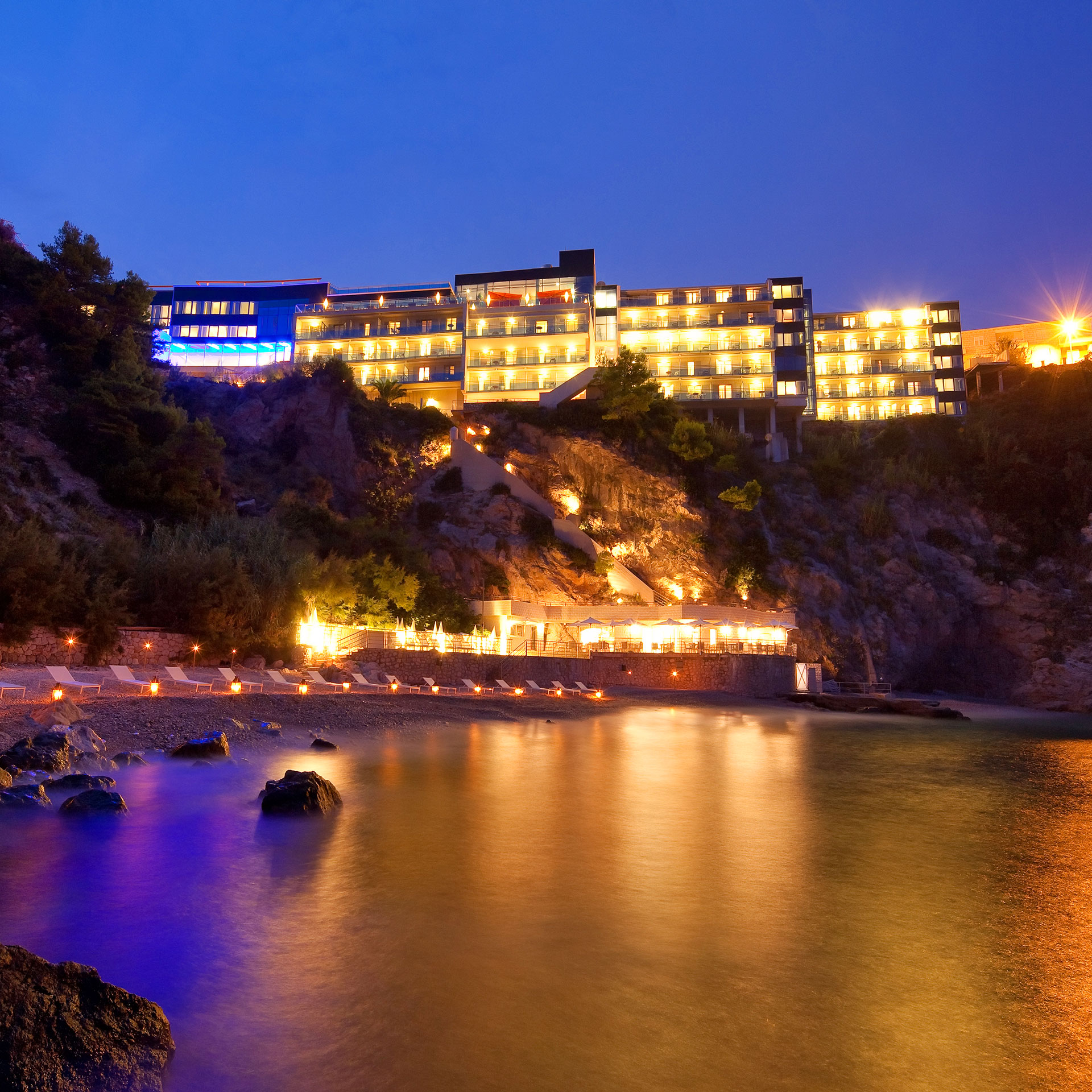 Dubrovnik, Croatia
Travelers have high expectations for Dubrovnik, and this gem on the Adriatic is perfectly capable of meeting them — all the more so now that the Hotel Excelsior is back. It once played host to guests like Queen Elizabeth II and Elizabeth Taylor, and after a renovation that’s brought it up to 21st-century luxury-hotel standards, it’s poised to retake its place in the top level of Dubrovnik’s hospitality scene. 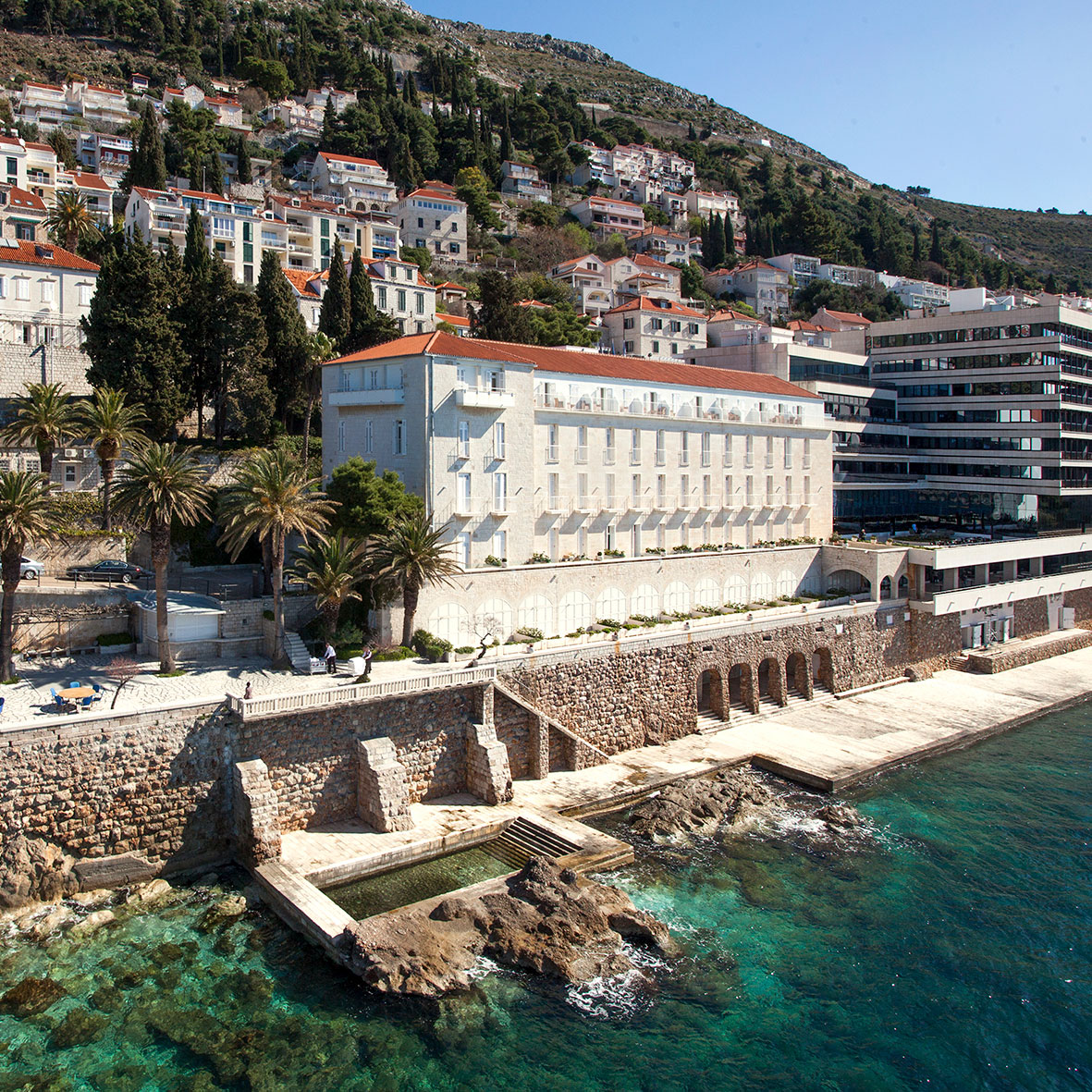 Rovinj, Croatia
Lone Hotel looks a bit like a spaceship — a spaceship made by some of the top Croatian architects and designers — parked at the edge of the forest on the outskirts of Rovinj. Though it’s an easy five-minute drive to town, the location puts the emphasis on the natural surroundings. And if you’re going to be the tiniest bit isolated, with little but forest and beach in the immediate vicinity, it helps to stay in a hotel as well-equipped as this one. 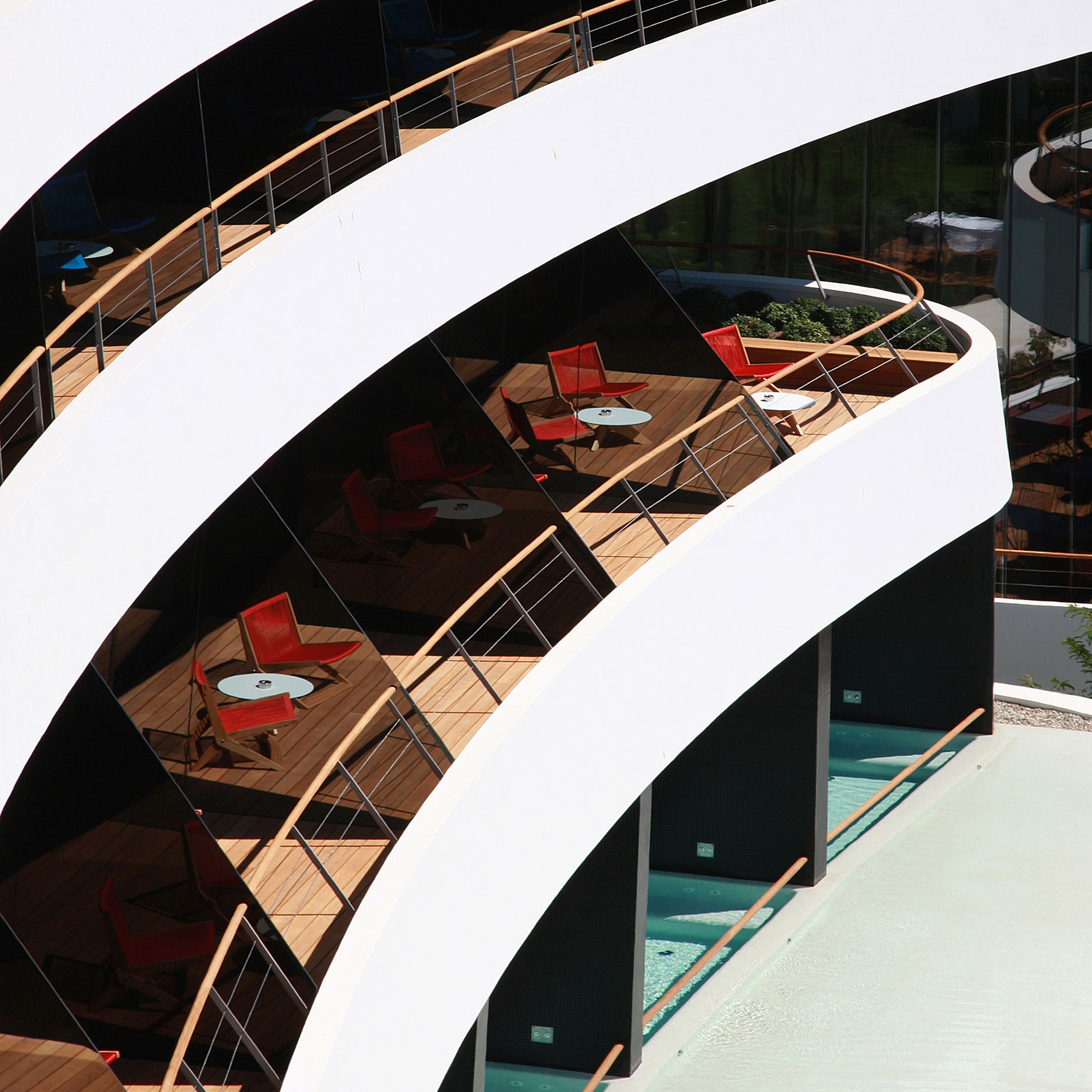 Lošinj, Croatia
Boutique Hotel Alhambra is a carefully restored concern on the southwest shore of the narrow Cres-Lošinj archipelago. You can tell right away that this was once a grand old villa — however thoroughly renovated, its architectural personality still comes through in the Austro-Hungarian façade, picturesque in every detail, from the arched loggias to the elegant quoin corners to the terra-cotta roofing. 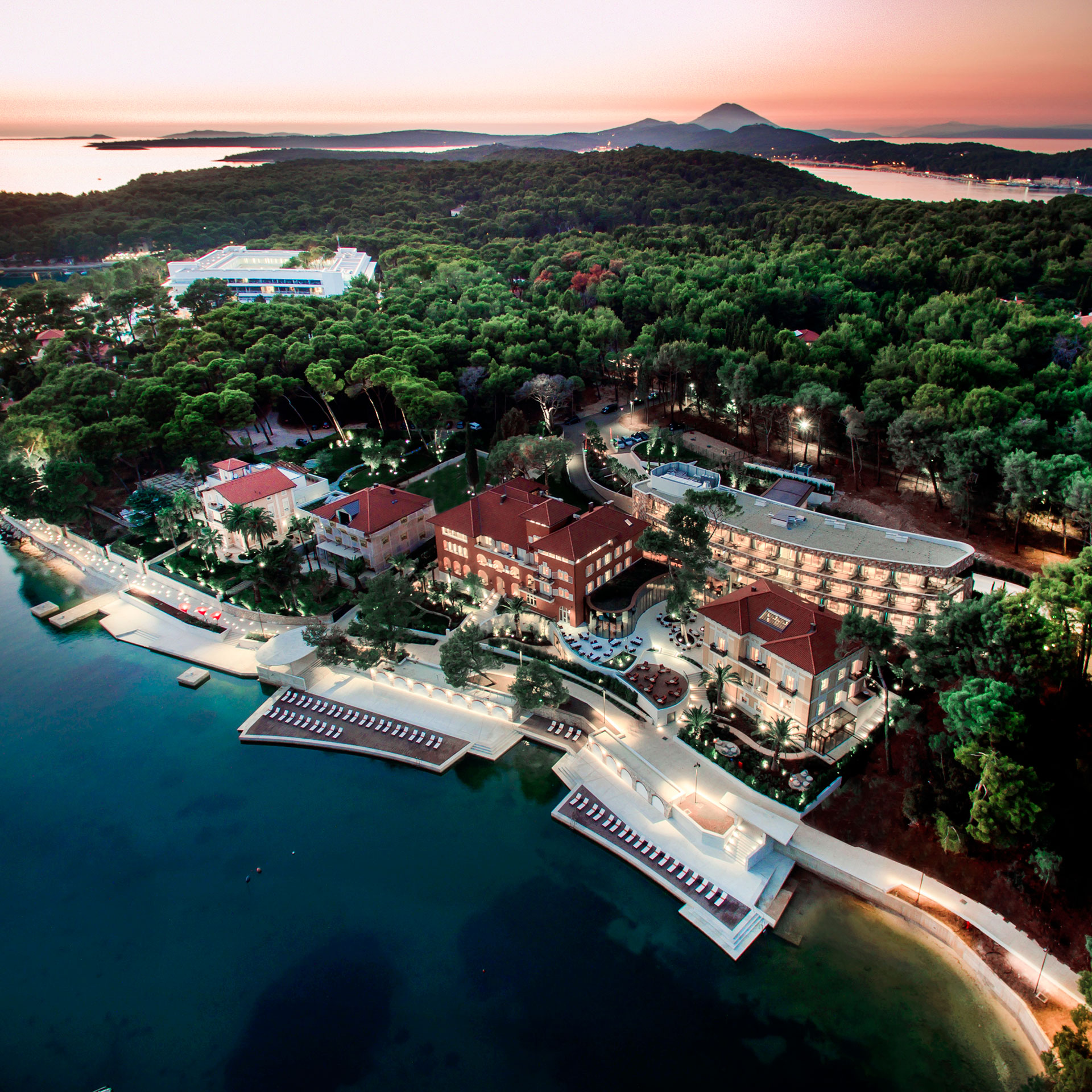 Dugi Otok, Croatia
Croatia may not have as many extraordinary hotels as a country like Italy, but the best of them are up there with the most inspiring hotels in the world. Among them is Villa Nai 3.3, the work of the Croatian architect Nikola Bašić, whose plan called for the excavation of the interior of a hillside on the Dalmatian island of Dugi Otok, and whose low-profile exterior structures are built from the stone extracted from the caves. 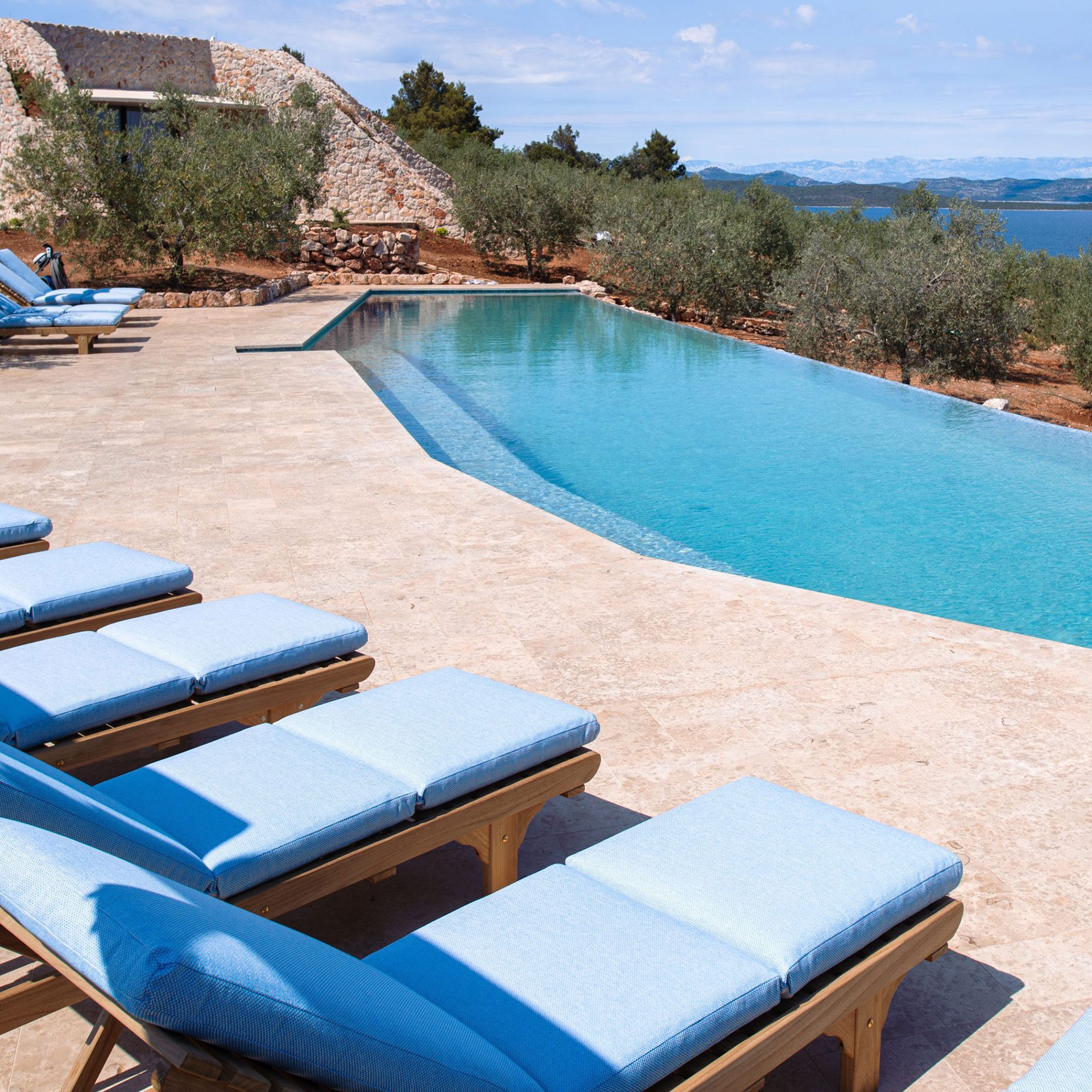 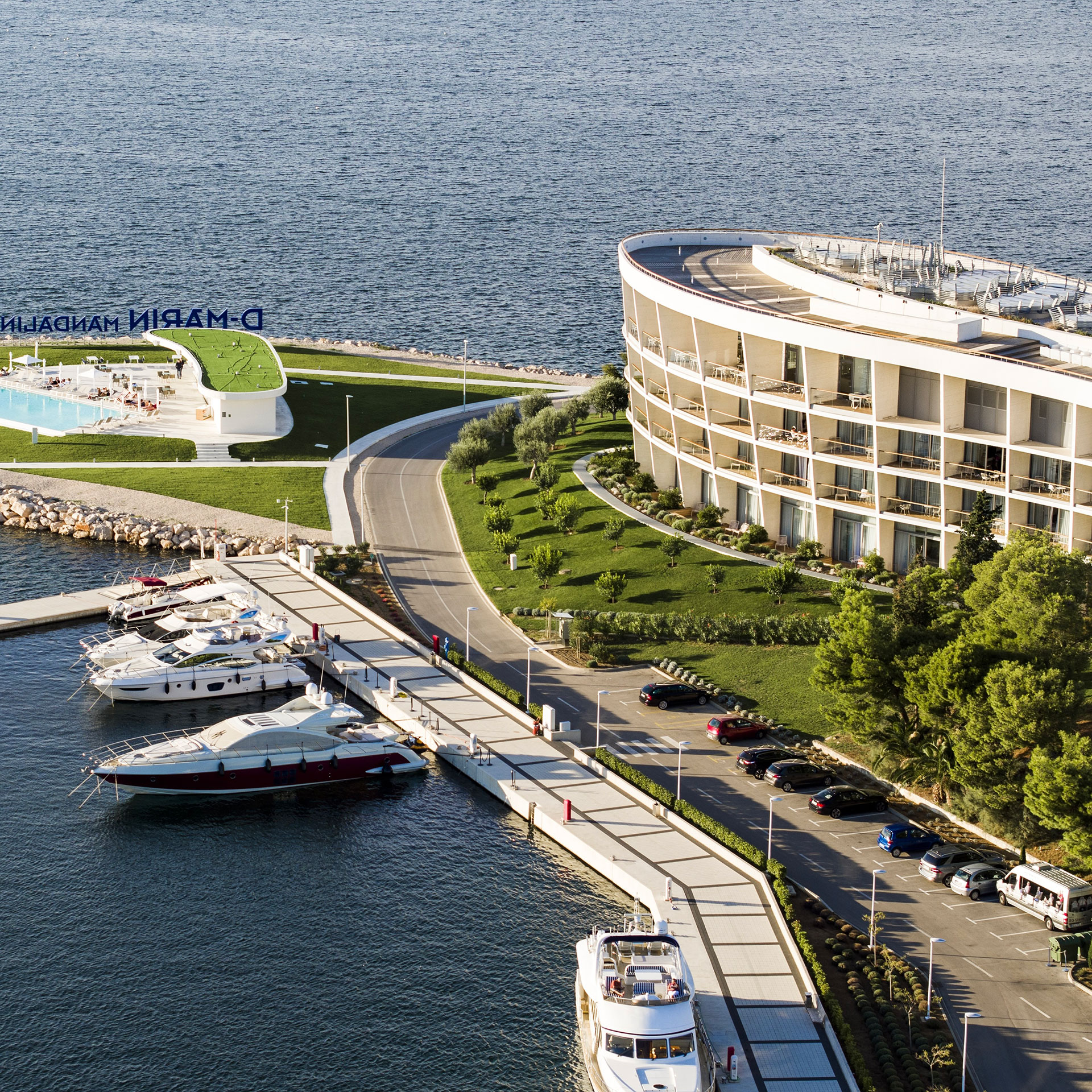 Ika, Croatia
For all the talk about resorts, you’ll be delighted to learn of Ikador’s small size: just nine rooms and seven suites, all of them spacious, colorful, and charmingly Art Deco–inspired. The comforts are first-rate, from the in-room espresso machines to the Hermès bath products, and, in many suites, terraces that look out over the Adriatic. Despite its small size, Ikador has more than enough to offer for a complete stay. 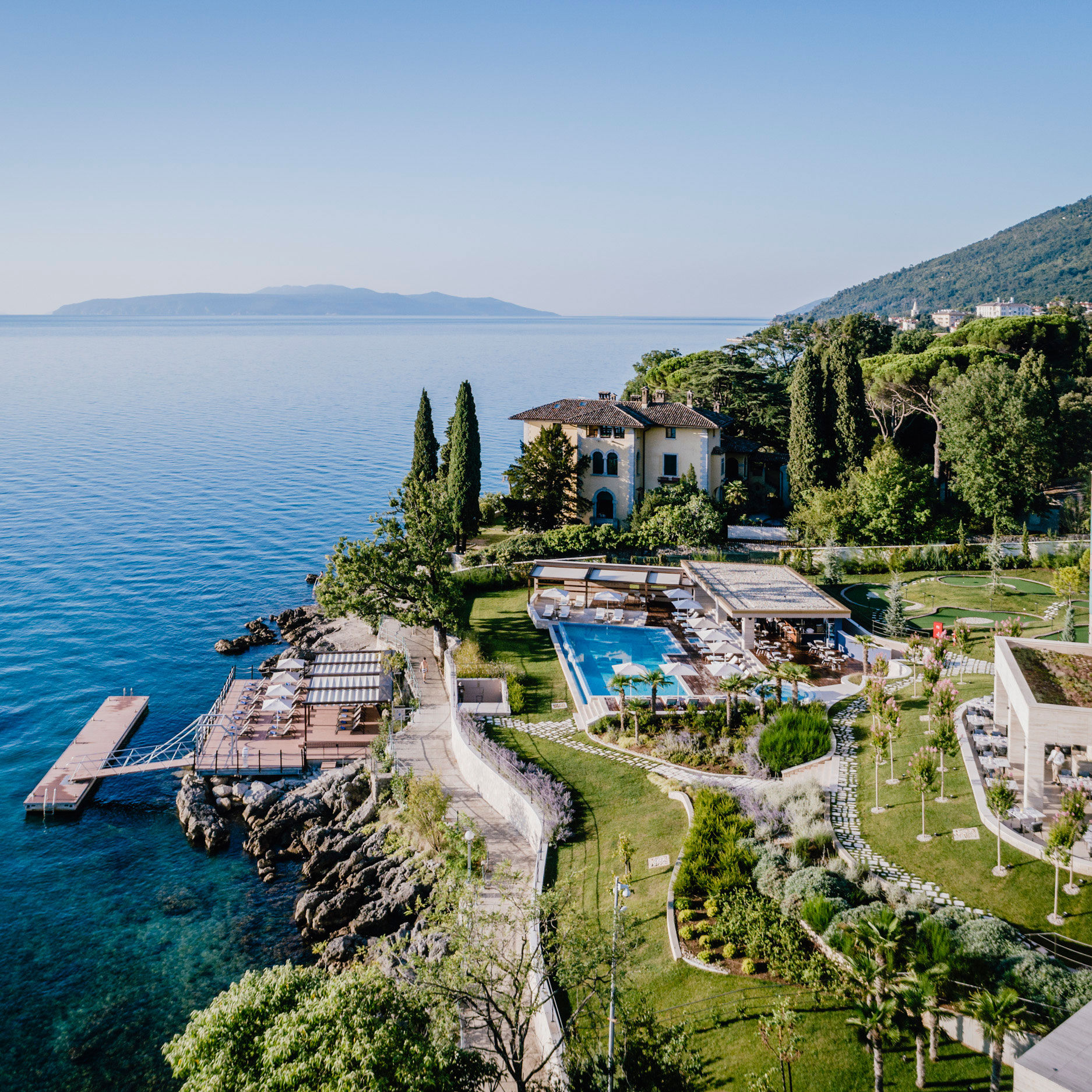 Porec, Croatia
The Valamar Riviera Hotel is perched at the water’s edge in Porec, a 2,000-year-old seaside town encompassing 37 kilometers of pristine Adriatic coastline. The hotel’s red-orange façade blends with the surrounding rooftops to form a distinctively Eastern European waterfront tableau. Inside, the design acknowledges the community’s seagoing history with a clean nautical aesthetic that defines the guest rooms. 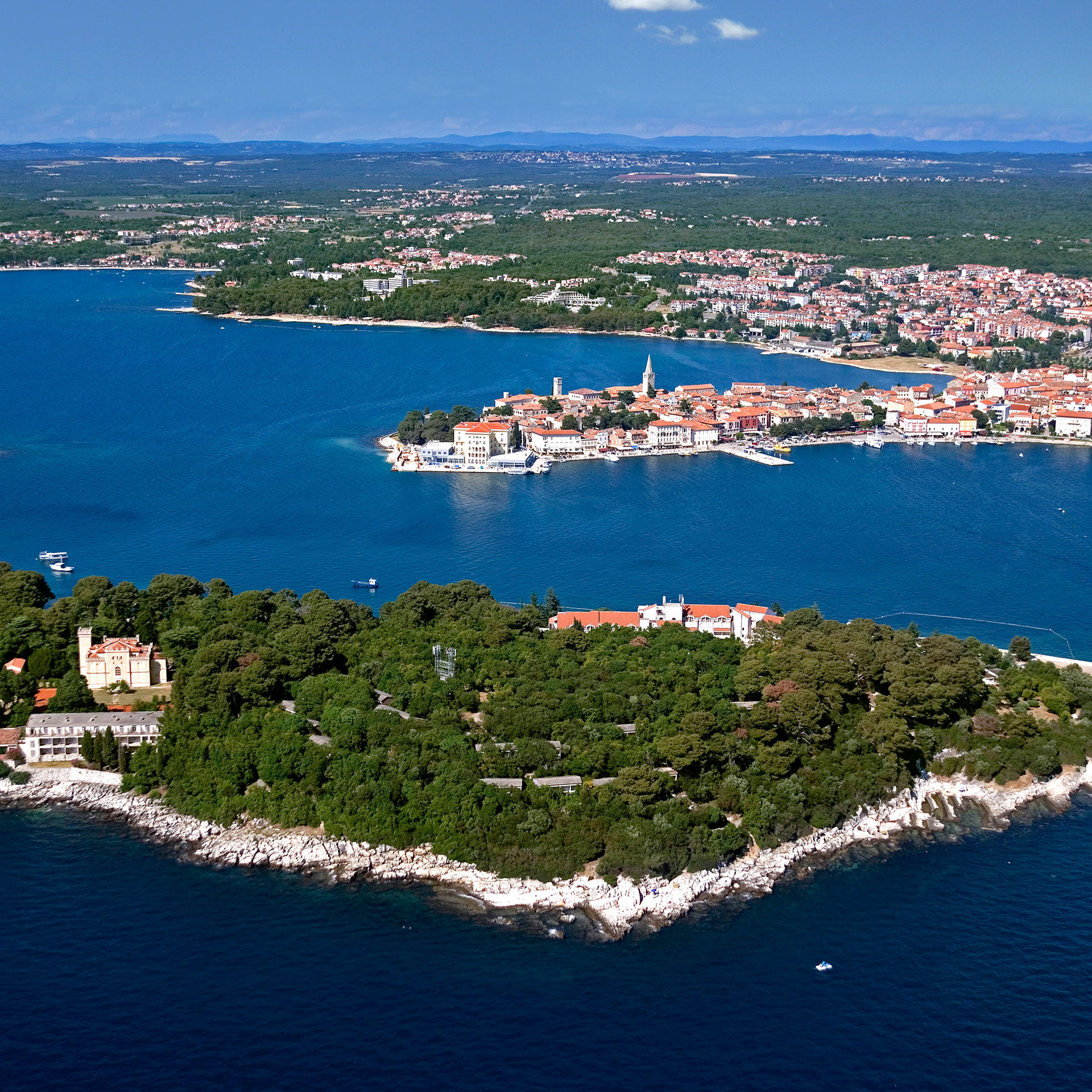 Trogir, Croatia
When the Duhanka building was constructed in the late 19th century, it was something of an avant-garde take on a warehouse, and became a major stop for the Dalmatian coast’s tobacco trade. In its new life as the Brown Beach House, this already impressive structure has been improved with modernist design by Saar Zafir. Suites feel like the mid-century retro apartments of guests’ dreams, some offering windows onto the Adriatic sea. 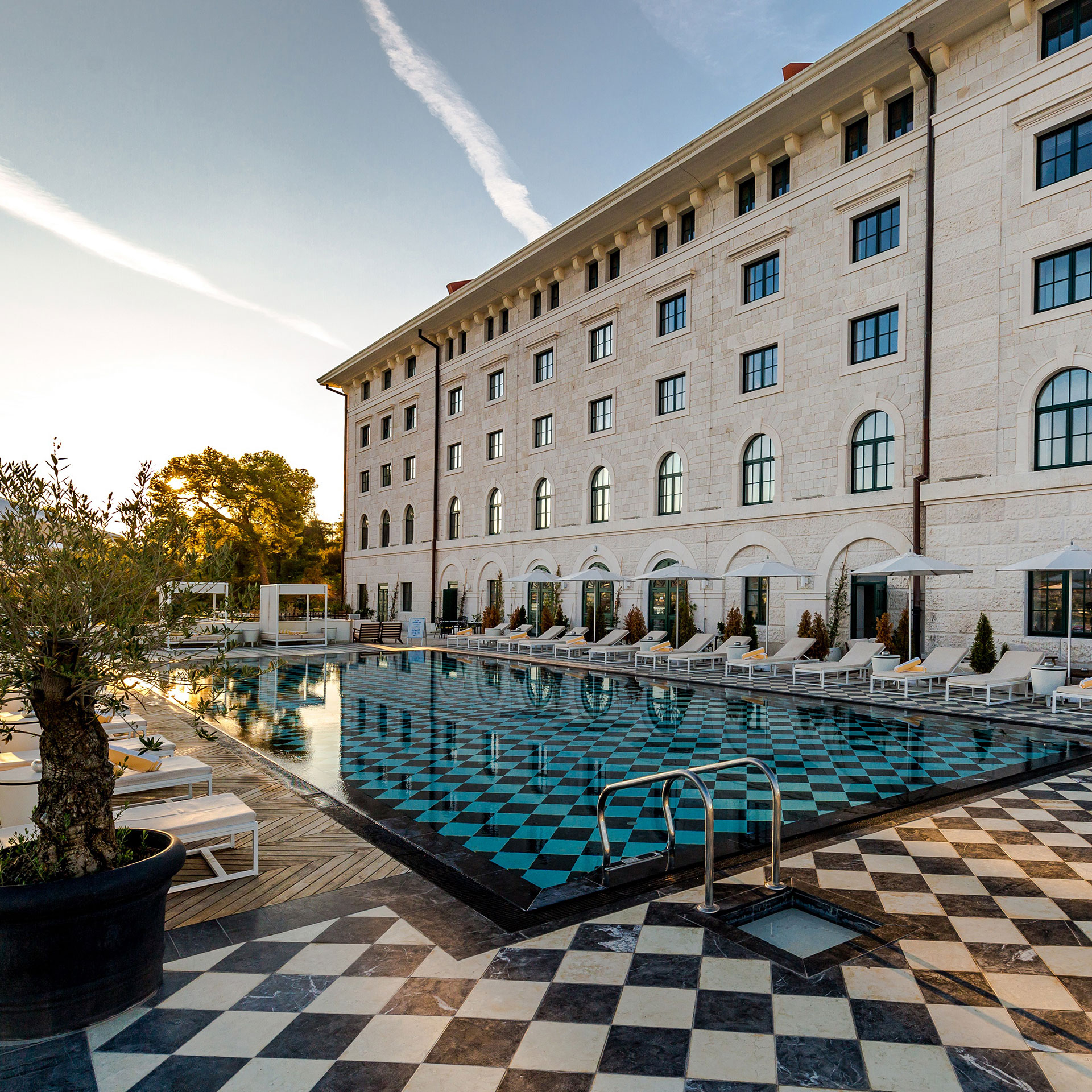 Hvar, Croatia
The Riva hotel, a hundred-year-old Italianate villa redesigned in a modern-minimalist style, has a prime location right on the waterfront of the Hvar harbor. That’s the marina just outside, and the historic village streets and the up-and-coming Hvar nightlife are just steps away. Its surprisingly stylish interiors are just icing on the cake. 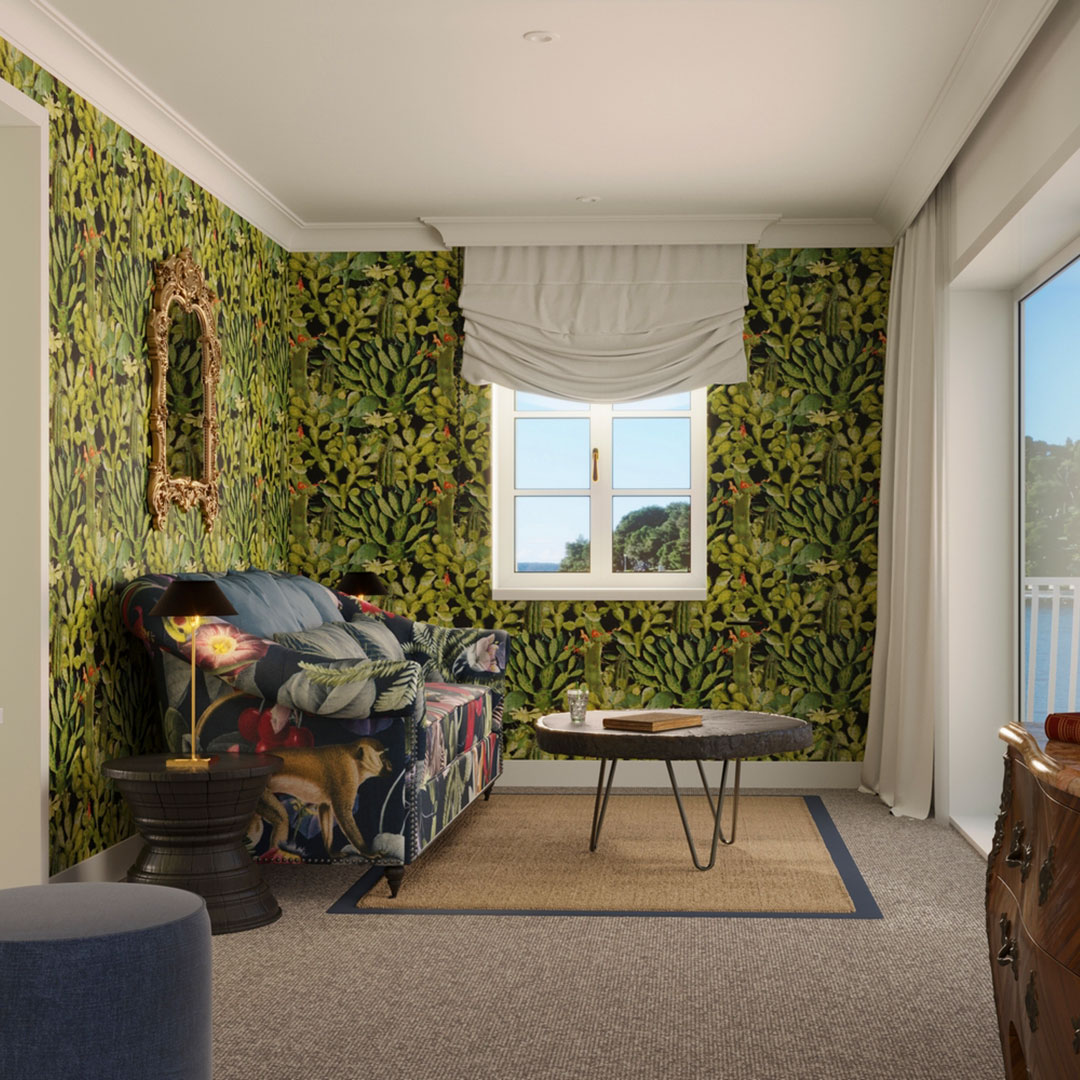 Hvar, Croatia
In a town where super-yachts compete for attention with the latest celebrity visitors and where even the swimwear is strictly couture, the Amfora could almost be called modest. Sure, it’s a 324-room mega-resort with an enormous, cascading pool as a centerpiece, but with its restrained, clean-lined rooms and its tranquil bayside setting ten minutes outside of town, it’s practically spartan by local standards. 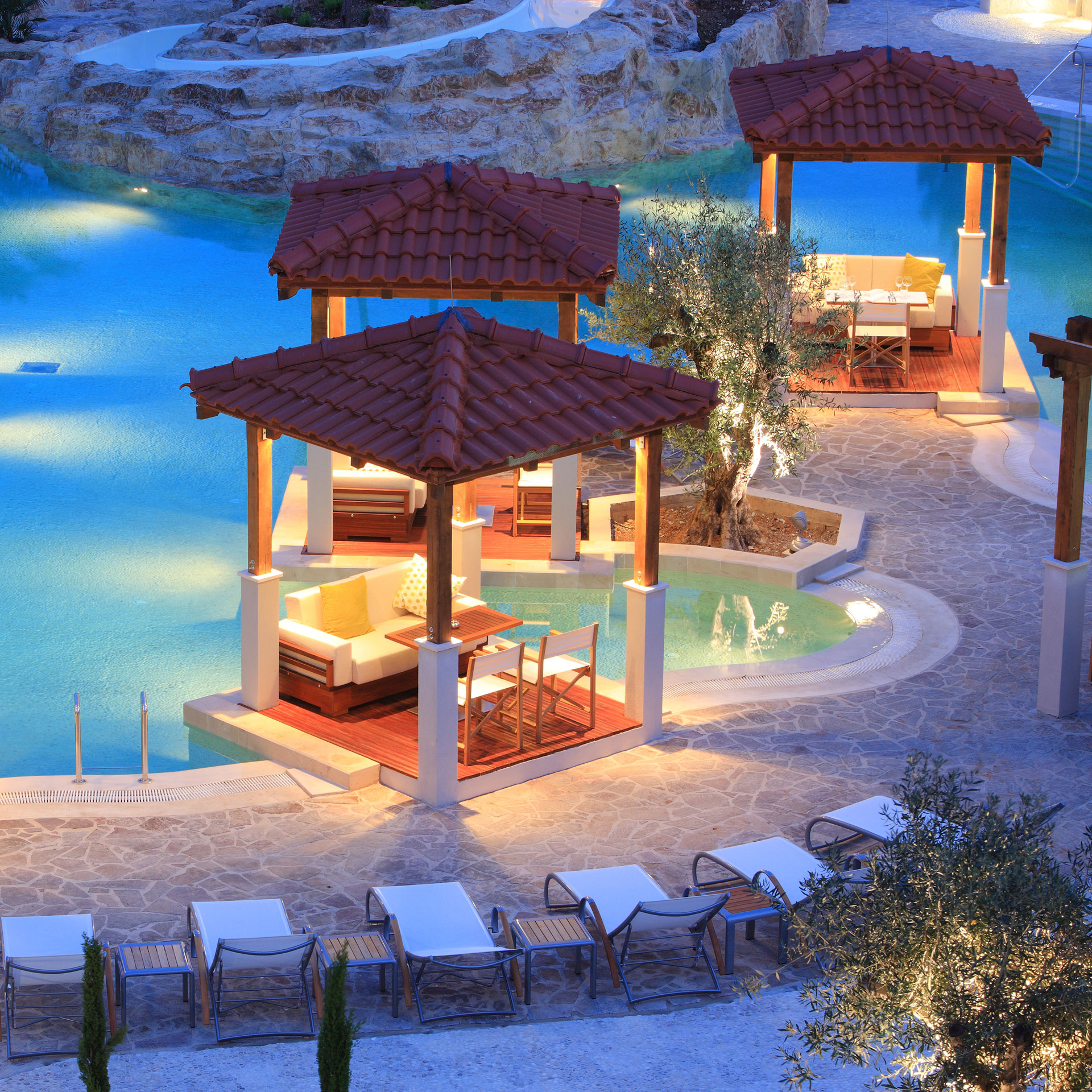 Petrčane, Croatia
It’s only fairly recently that the travel infrastructure along Croatia’s Adriatic coast has had time to catch up a bit with its stunning landscapes and seascapes. And Punta Skala is no different. This peninsula, a few hours up the coast from more familiar locales like Dubrovnik and Split, has put itself on the international travel map in a big way, thanks to the advent of the massive, modern, and luxe Falkensteiner Hotel & Spa Iadera. 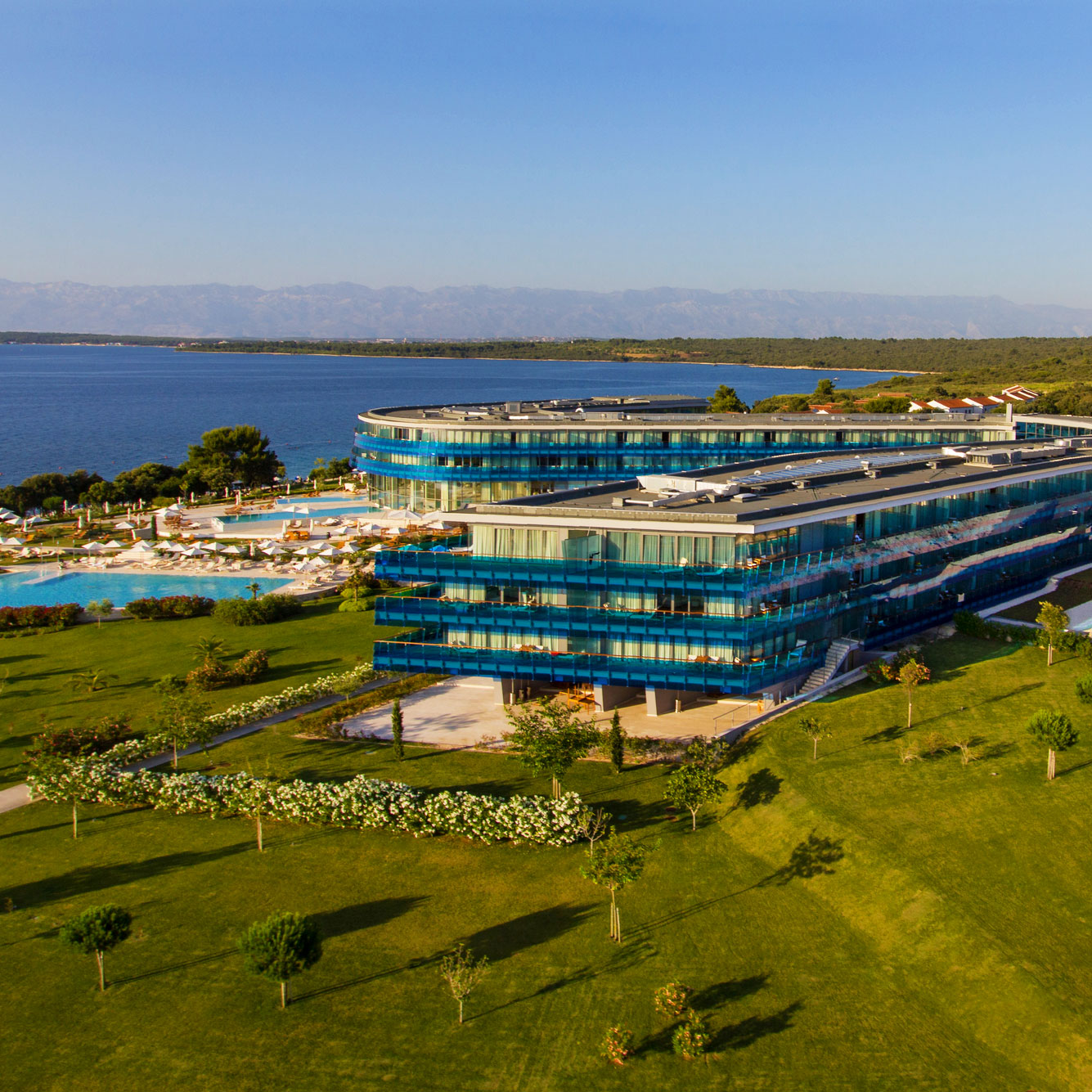