In 2017, after 18 years in business, Michael Kornick’s influential restaurant mk in Chicago’s River North neighborhood closed for good. While the city may have lost a bastion of seasonal American cuisine and stellar hospitality, it would soon gain an equally vital restaurant in Virtue, led by mk’s former executive chef, Erick Williams. Hardly a year later, Williams opened Virtue, his first solo venture and a MICHELIN Bib Gourmand in the 2020 Guide to Chicago. The Hyde Park restaurant has a menu of dishes from the African American diaspora, composed to both honor nostalgia and tradition but also push the boundaries of flavor and presentation.

Williams has had a long and fruitful career in the restaurant business. At Virtue, he has settled into his role as a leader and mentor, and is set on paying it forward by ushering in a new generation of aspiring chefs and business owners. In a recent discussion, Williams goes deep on structural barriers in the industry, the importance of cultivating confidence and how this moment in the hospitality business is unlike any before — ripe for change.

How did the concept for Virtue, a contemporary Southern restaurant, come together?

Virtue is a culmination of my experiences. I was very curious about [southern food] and that curiosity stemmed from research that I had done for a barbecue concept I opened with Michael. I had this looming question as I kept traveling to eat: How is this the South and we're treating everything like it's an island? Florida is a separate thing and Texas is a separate thing and the Carolinas — even from South Carolina to North Carolina. But what does all of it fall under? It boils down to, in my humble opinion, southern cooking. As I started thinking about that, it started to feel really good. It didn’t put me in a box. Part of what I didn’t want to do is just cook soul food.

So the story started to form through that research and curiosity. But also experiences that took place in the homes of family members. We think about service as a technical thing, this idea of your water glass being full or empty. Hospitality is what brings it all to life. And that has parallels in our home spaces — that moment, when you're in a crowded room and your aunt or uncle comes over and just sits with you for a minute. In that moment, it feels like you matter more to that person than anybody else in the room. That’s really just hospitality.

Our restaurant was named after a set of values. We anchored it in hospitality and kindness with this backdrop of a cultural narrative. And last but not least, it had to be delicious.


How did you get from head chef to chef proprietor? What prepared you for this role?

My experience was unique. I grew up in a really challenging neighborhood [in Chicago]. My mother was determined, by the age of 29, to own her own home, which fueled my determination. It gave me a lot of confidence. You have whole communities that have never seen anybody own and operate a really viable business. We're still saying this is the first generation that went to college. That forced me to start to understand assets versus liabilities, lending, credit scores, the habits of paying bills in a timely fashion. And what the consequence is when you don’t.

[At mk] I was encouraged to go out and greet guests and in doing that people say things like, when are you going to own your own restaurant? You build this database of people who might invest in your space. I know a lot of people that don't have access to potential investors, they don't even know where to start building a pitch. It's not that the information is hidden or buried somewhere, it's the confidence to look it up and believe that you can actually go out and pitch your idea to someone.

I had been given access to quite a bit at mk. I started on the salad station and worked my way up to being a partner of Michael and Lisa’s. I saw the P&L, what the rent rate was, what the taxes were, the water bill. That access allowed me to see processes. When it closed, it took a while to process that. I did some interviews, but as I kept thinking about the amount of energy required to physically take over a kitchen, it became more apparent that what I really wanted was my own. It's the same construct, except you don't have to ask for permission.

I had an opportunity presented to me and by the time I made a decision, we were rolling pretty quickly. We opened a restaurant in 102 days. I don't know how we pulled it off. Granted, we took over an existing restaurant space and the previous operators were very supportive.

So my situation is a little unique. I've had exposure and access to some things — in a very modest setting, I can't emphasize that enough. I don't come from a wealthy family. I'm not an heir to anything but my fate and my value system. But those two things have served me well. 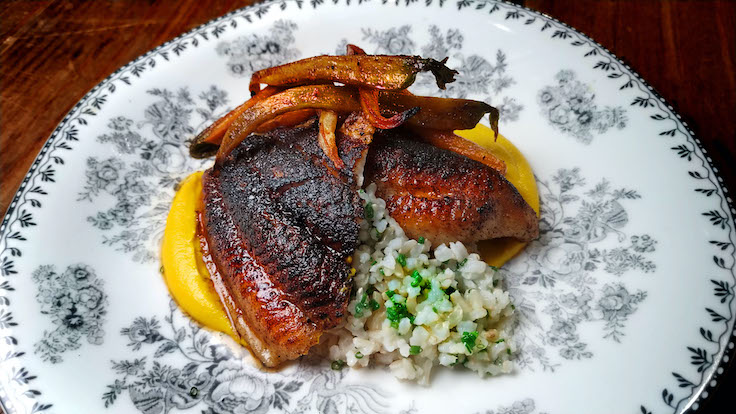 At Virtue, Chef Erick Williams cooks dishes like blackened catfish that celebrate the cuisine of the African American diaspora and the American South. Photo by Gary Adcock Studio.

What barriers might exist for Black people aspiring to own a restaurant?

Being an owner of a restaurant and being African American is, these days, rare. For quite a few years, most of us couldn't name six Black chefs, let alone six Black chef owners. There are a set of circumstances that don’t encourage growth. There are so many challenges embedded in the challenge before you get to anything else.

When you look at data from the last ten years, it proves that we're still dealing with injustices in the workplace. Take two males—same education and same position — and the African American male is making less than the white male. We’re still dealing with injustices when you take data that shows African American home ownership is on a slow incline; a fraction of home ownership than almost every other race. You can still see the damage done from slavery. You can see how redlining, put in place years ago, continues to be an obstacle. Insurance is higher in African American neighborhoods than it is in other neighborhoods. Then you have to take a step back and ask why certain neighborhoods have been over-policed. All of that plays a role.

Opening a restaurant, especially your first one, is an exercise of survival. You have to prove the concept and you’ve got your reputation on the line. At some point, there have to be more people willing to take on that risk. You have some groups that can leverage family wealth that has been acquired over years. It is easier when you grew up in communities that have a strong middle class and that community may want to support your dream by investing. Those scenarios are different than the scenario of going to a bank and asking for a loan, maybe you leverage your house, but if the restaurant doesn't work, you lose everything. That's a huge setback. And your collateral was earned at a fraction of your peers, so you physically have less money going into the bank. You physically have less wealth.


How can the industry better support Black chefs?

I think the purpose needs to shift. We have to shift our purpose in the hospitality community. For the first time in my life in restaurants, the cause is us. The cause is equality. The cause is justice. The cause is decency and integrity. As the platform gets grander and as your voice reaches more people, there's responsibility attached to that.


Tell me more about the role you and the restaurant are playing in creating this shift.

Chefs chase a lot of things, we chase accolades, features and magazines. But at this point in my career, I'm really chasing the opportunity to witness other people chase those things. I am interested in creating a platform that allows people of color and people of all races, religions, backgrounds to have access to the same level of confidence that I have in my work.

We opened a restaurant that has purpose, and some would say it's living up to its thing. We're really proud of the strides we’ve made and we don't want to lose sight of what we're trying to do it do by stretching ourselves too thin. Obviously, we want to be a restaurant that can be recognized for its efforts, but what we really want to do is create the next wave of leadership.

As much as we need ownership, we also need a larger presence in spaces like office management. We need a strong presence in accounting and the attorneys that represent restaurants. I think operators are going to step up, I have a lot of hope and confidence in in this industry. I don’t know another industry that has historically given access to everybody — a cook could be an ex-felon and working the line with someone who was a power attorney. Now it's time for us to extend that diversity beyond entry level to the highest levels.