Chef Chris Nugent and his wife, Nina, opened their attractive and intimate restaurant, Goosefoot, almost ten years ago. The restaurant was awarded One MICHELIN Star after just over one year of service. Here, the Nugents host a dinner party-style tasting experience featuring a menu of seasonal, artfully plated French-American fare. Though Goosefoot is temporarily closed due to the Covid-19 pandemic, Chris and Nina are patiently waiting for the day they can welcome guests into their dining room once again.

The following interview has been condensed and edited for clarity.

You’ve had a prolific and successful career as a chef. How did you first get into cooking?

I started young. My mother was ill, she had a kidney disease, and she passed around 1985. I went to live with John Daly, the chef at The Drovers Inn, and his family. He ran this little French fine dining restaurant in an old historic house [in upstate New York]. I came up under him. I would go there after school so he could keep an eye on me, and he would give me something to do to because I was too young to work. Then, you know, somebody leaves and they just throw you into the kitchen to become a full-blown member of the team.

I stayed at Drovers Inn until I went to culinary school — I was either going go to art school or a culinary school, and I ended up going to culinary because I loved it. [Cooking] kind of chose me. It was good for somebody going through a tough time. Working in the restaurant business will definitely take your mind off things because you're always busy. It was a good fit for me. I applied to Johnson & Wales and I did well there. I loved it.

What were some key experiences you had working in kitchens before opening Goosefoot?

When I graduated, I came to Chicago. I worked with Stephen Langlois at Prairie. We did wonderful, Midwestern cuisine at the restaurant. [Langlois] made it his own, and he made it more contemporary. From there, I went to The Mid-America Club. I wanted to try out fine dining. The chef was Dan McGee, an alumnus of Trotter. It was classic French cuisine with a lot of tableside cooking. It was a good fit for me because I knew all those things.

I went on to trial at MK, which was over on Franklin Street in Chicago. It was more of an American contemporary restaurant. And very, very busy. I stayed there for about a year and a half before I ended up at Park Avenue Cafe. My [future] wife, Nina, was the finance director of the hotel. We dated for like three months then she said, ‘we're either getting married or I'm going home.’ We got married in 2001.

After Park Avenue Cafe, I became executive chef at Betise, a little bistro out in Wilmette. It was a perfect spot for me, I got time to refine what I was doing — French American cooking with a with a twist. I was there about five and a half years, which is a long time. Then after that I went to Les Nomades. I was there about seven and a half years. 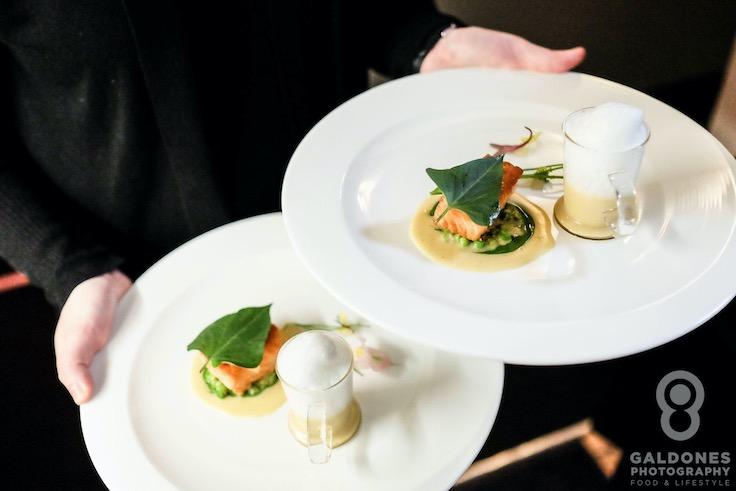 A preparation of King salmon at Goosefoot. © Galdones Photography. Courtesy of Goosefoot Restaurant.

What finally spurred you to strike out on your own and open Goosefoot?

I had an opportunity to go to England. I thought the one thing I was missing was experience in Europe, so I went and worked with John Campbell of The Vineyard at Stockross in Newbury for a couple of weeks. I was still running Les Nomades so it was just a quick trip, like a stage. John and his team were just outstanding and it was exactly the kind of set up I had envisioned for my own restaurant. It was contemporary but it didn't stray too far from tradition. People could identify with the food. That's kind of what I do. Market to table food that is forward thinking, but also fun. It's gotta be fun, you know.

Later that year, my brother passed away. It was an eye opener for me. I didn’t want to waste any more time working for somebody else. My wife and I didn't have any investors, we just put all our money together, a whole bunch of loans and credit cards, and took a risk on a property that was right down the street. We designed it ourselves. And we opened the day we were out of money, hoping somebody would show up.

Opening any small business, it’s your life. It's everything. It's a dream that you've been dreaming about for many years. And finally, it all comes together and you open those doors — it's an unbelievable feeling.

How do you approach creating a dish and designing your tasting menu?

For me, it starts with flavors. First thing I see is what's in season, but also what my purveyors have lined up. I might have a smaller group of farmers that I work with, but I'm consistent. I work with them because I care about them. They depend on [me]. Then I start working on the balance of texture and acidity. You have to understand the basics, to be grounded in traditional French or European cooking, then you can play with the flavors, the acidity, the balance, and presentation. You can't have fun with that if you don't know the foundations of cooking. 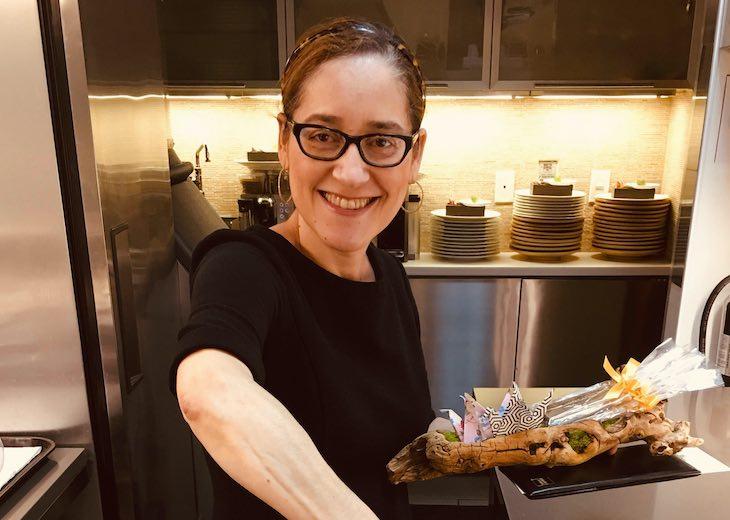 Nina Nugent offers front of house support at Goosefoot, where she welcomes guests with warmth and a smile. Photo courtesy of Goosefoot Restaurant.

What would you say has been the key to your success at Goosefoot?

We're in a unique spot, because we get people who come from all over the world. At the same time, we have people from the suburbs and people who actually live here from the city. We were fully booked for the first five or so years. But then my father got ill so we made the restaurant smaller and we took tables out. I wanted to spend time with him because I knew it was his last year. We slowed it down on purpose.

Over the course of the years, we've learned that it's about every guest, every plate, every evening. That's always been my philosophy. It's not really about [me]; it's about them. People are coming to celebrate their 10th anniversary. I've seen people have their first date. I've seen people celebrating their last cancer treatment. I've even had a guest celebrate his 94th birthday. I look at my guests and think, what is going to make these people who are supporting us happy.

But also, my wife is our secret weapon. [Nina] and I opened the restaurant, just the two of us. If we want to change something, we change it. And if we don't think it's right for us, then we don't do that. I think it’s important to have that trust. I wanted to be an artist; I’m creative. She’s in finance and she just said, ‘do your thing and I'll make sure it works out.’ The restaurant would not be here without her. She makes every single guest feel like they're in our home.

Your restaurant really is a personal endeavor, isn’t it?

Our first guest was my father. That was what mattered the most to me. Then, right before he passed, he came in and we had dinner with him. It means a lot to me. We're going to be a part of people's lives and there are going to be a lot of magical moments. Those four walls have seen a lot of things.

On Tuesday, May 19th, Nugent will be talking to the hosts of a new web-based series called The Love of Cars presented by automotive lifestyle brand, Hagerty. On the show, former pro racers Justin Bell and Tommy Kendall will be talking about incredible cars and interviewing fascinating people in the automotive world. To hear Nugent talk cars with Bell and Kendall, tune in here at 7pm EST.