Today, sushi is eaten on date nights from Los Angeles to New York City, delivered in faux bamboo trays from Seattle to Philadelphia, and even sold alongside string cheese at national drugstore chains. So it’s hard to believe that sushi bars were unheard of in America until just over 50 years ago, when Kawafuku, the first “real” sushi restaurant the country had ever seen, opened in Los Angeles.

Now, that’s not to say the country had never seen sushi before 1966 when Kawafuku first started slinging nigiri. In fact, it was trendy in the very early 1900s. According to author Megan Howord in Sushi Cookbook, one of the earliest mentions of sushi in America appeared in a 1904 Los Angeles Herald article regarding a luncheon thrown by socialite Fern Dell Higgins. Sushi continued to be the “it” dish served at chi-chi luncheons and dinner parties across the country (even reaching into North Dakota) until the Gentlemen’s Agreement of 1907 cut ties between Japan and the U.S. Years later, World War II would further cement that split and reinforce anti-Japanese sentiment in America. Finally, though, in the late 1940s, Japanese businesses began to open once more, bringing with them Japanese businessmen with a craving for sushi.

Matsuno Sushi in Los Angeles’s Little Tokyo neighborhood was a destination for some of these arrivals. More of a snack counter than a restaurant, it offered maki made with local tuna and inari (rice-stuffed tofu skins). By the time the ‘60s rolled around, there was a handful of more serious Japanese restaurants, but still nothing we would regard as a sushi restaurant. 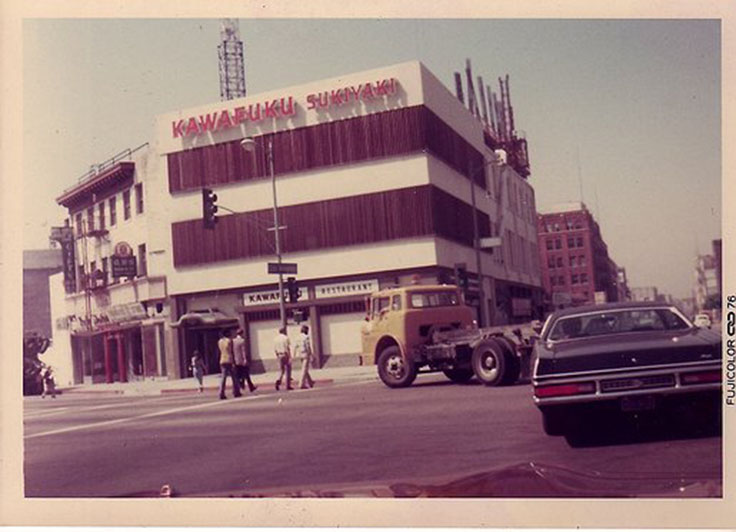 Kawafuku opened in Los Angeles in the mid '60s. (Photo courtesy of discovernikkei.org.)

Then, sometime between 1964 and 1966 (accounts vary according to which food historian you trust), an importer named Noritoshi Kanai opened Kawafuku with chef Shigeo Saito behind the knife and Saito’s wife serving in the front of the house. According to Sasha Issenberg in The Sushi Economy, the menu was based primarily around local seafood such as sea urchin, abalone, mackerel and tuna. Saito supplemented with seafood shipped from Japan’s famed Tsukiji Market, as well, bringing exotic dishes like giant clams to the city. He created meals to order, serving customers over the counter. It was a real sushi bar—a phrase Kanai claimed to have coined.

Not long after Kawafuku opened, Tokyo Kaikan started hawking its own style of sushi. Owned by a food conglomerate, it had quite a different vibe than Kawafuku, whose clientele primarily consisted of Japanese immigrants. Tokyo Kaikan was big, seating 300 in the main dining room. It also offered much more than sushi, featuring different sections of the restaurants specializing in everything from tempura to teppanyaki. It also included a disco on the second floor called Tokyo-a-Go-Go. And it was a hit with L.A. celebs like Rock Hudson and Audrey Hepburn.

Tokyo Kaikan is also one of the restaurants that lays claim to the invention of the California roll. According to lore, chef Ichiro Mashita invented the roll when he swapped out king crab for fatty tuna when the fish was out of season, and opted to turn the roll inside out to assuage Americans’ aversion to seeing seaweed. The mayo and sesame seeds would come later—as would the imitation crab. Other theories put forward alternative histories, including one citing Vancouver chef Hidekazu Tojo as the man responsible for wrapping crab in rice-coated nori. Perhaps it was parallel thinking. Whatever the case, the California roll went on to become an integral part of sushi’s growing popularity.

In the late ‘70s and early ‘80s, an economic boom in Japan brought an influx of Japanese businesses to the U.S., and along with them, Japanese immigrants with a yen for the tastes of home. It wasn’t long before chefs in Japan heard that there was a market for sushi in America and headed to the cities where they could break from the tradition of their home country, should they want to, à la Tokyo Kaikan, or extend the tradition to a new audience, à la Kawafuku.

Though America’s sushi bar history may have started with traditional nigiri, it would be a long time before that would become the norm. In fact, it still isn’t. While the popularity of traditional nigiri sushi has certainly grown, the spicy tuna rolls and California rolls still pay the bills. And crazy, over-the-top rolls still dominate menus. 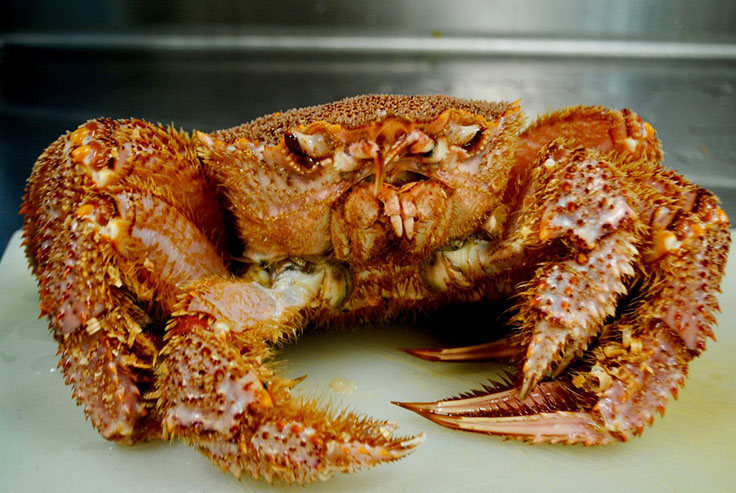 “I think the biggest difference between sushi in America and Japan is what people are looking for in sushi. American people want vibrant colors and highly decorated sushi. People in Japan think good sushi is simple—good sushi rice, and good tasting fish,” says Yohei Matsuki, executive chef of two-MICHELIN-starred Sushi Ginza Onodera in Los Angeles, which specializes in traditional edomae-style sushi made with fish imported from Tokyo’s Toyosu fish market and rice from the Niigata prefecture.

Brandon Hayato Go, owner and chef of Los Angeles’s kaiseki-inspired Hayato agrees: “There is a wide range of personal tastes for consumers in both countries, but in general, I think Japanese consumers value simplicity and purity in sushi, whereas American consumers are more interested in seeing a novel approach to sushi with different sauces, cooked or seared fish, and non-traditional toppings. Of course this is a generalization, and there are consumers in both Japan and the U.S. who cover the gamut in terms of preferences.”

More and more, though, restaurants and chefs are turning their focus to sushi that celebrates the simplicity of fish and rice.

It starts with education. “I think we are able to let America know what true traditional food in Japan is,” Matsuki says. “I have done my training for years in Japan. Now it is my turn. I will keep on training young Americans in ‘sushi-do’ [path of sushi].” Chef Kazushige Suzuki, the head sushi chef at Sushi Ginza Onodera’s New York City location, agrees, saying that his goal is “to show customers the real sushi and to show American chefs the beauty of real Japanese sushi.”

While Hayato does not focus on sushi alone, Go, who grew up in his father’s sushi restaurant, is working to educate customers on the nuances of fish in the sashimi he serves. “I have been doing my best to educate guests as much as possible about how the flavor and texture of fish differs when it is wild versus farmed (all the fish we use is wild), and also how it differs during different seasons or places of origin,” he says. “I believe the more the guest knows about these things the more interesting it becomes to eat sushi and sashimi.”

While sushi in America will always conjure images of California rolls and spiral rainbows of fish, it will also continue to evolve and grow as more and more diners learn to appreciate its simple yet complex nature. Sushi in the U.S. will continue to walk the line between Japanese tradition and American innovation. It will be a three-star, fine-dining experience that transports you to Tokyo. And, whether you like it or not, it will continue to be available right alongside shampoo and yogurt in your local supermarket.

How to Pair Wine With Sushi

Sake isn't your only beverage options for this Japanese staple.

Chef Tatsu and the Art of Edomae Sushi

Chef Tatsuya Sekiguchi of Omakase Room by Tatsu shares his philosophy on the sushi style.

Get to know the sushi jedi behind the two-Michelin-starred Midtown Manhattan hotspot.