When Nora Ephron claims that your pastrami sandwich is the best in the world, you know you’re doing something right. For Norm Langer, owner of Langer’s in Los Angeles, he’s fully aware that he delivers a good product. The main goal is to ensure it stays that way. “I put out the same product I put out today that I put out 50 years ago,” Langer says. “It’s the same quality, consistency and volume of product. That’s how I was taught.”

In a time when fickle food trends are ever-present and restaurants are rising and falling as quickly as it takes to make a McDonald’s burger, there is one place that is entirely consistent: Langer’s Deli. First opened as a 12-seat restaurant in 1947 by Langer’s father, Albert J. Langer, Langer’s Deli has, during its lifetime, taken over two more buildings and grown to 135 seats. “My dad knew the business like the back of his hand,” Langer says. “He made sure that he put out the best product it could possibly be. That was the school that I went to; the school where you give the customer the same product today that you gave them the day you opened.” The deli still serves the same menu they’ve been dishing out since the ‘50s, with the addition of a few things. “My wife convinced me to add a Chinese chicken salad and we’ve expanded a few deli items,” he says. “But most people come here for the Langer’s pastrami.” 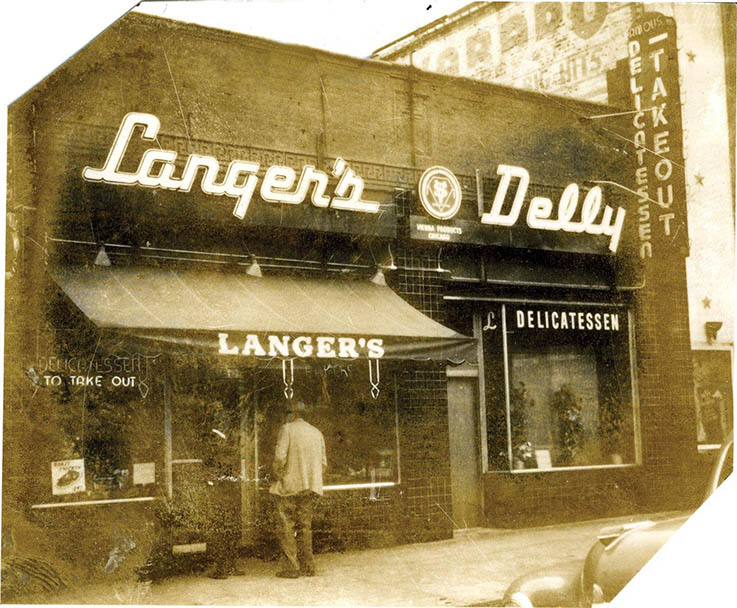 A recipe that was first developed by Albert J. Langer, the pastrami itself has remained totally unchanged. A cut of beef that is sugar-cured and seasoned, then slowly steamed until it’s so deliciously tender before being covered with spices, Langer’s pastrami has become one of the most sought-after ingredients in Los Angeles. And the number 19 hot pastrami sandwich is generally how people like to eat it. Hand-sliced pastrami, Swiss cheese and coleslaw with Russian-style dressing, wedged between two pieces of warm rye, it is positively one of the most famous sandwiches in the city. A sandwich that has satisfied discerning customers for well over 50 years.

It’s this tireless consistency that sets Langer’s apart in an industry of constant change and uncertainty. Not only is the menu the same and the pastrami recipe unchanged, but the deli has seen little staff turnover. Langer’s employs 40 people who, according to Langer, are like family. “I need them as much as they need me,” Langer says, who adds that his dishwasher recently retired after 51 years. 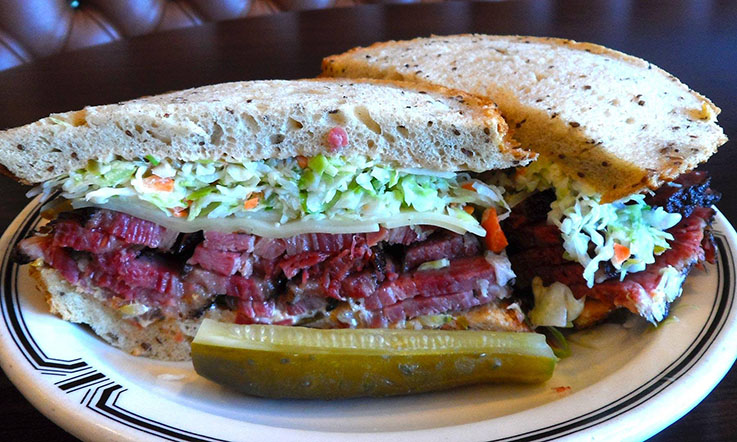 While Langer is willing to accommodate certain trends and add an item or two to the menu, he’s not willing to fiddle with the food.

As neighborhoods in Los Angeles expand and trend, Langer’s has also remained in its same location on South Alvarado Street in Westlake. The stout brick building, which has a thick green panel that runs above the roof that reads “Langer’s Restaurant Delicatessen,” has become an icon in the City of Angels. Inside, the vinyl interior of unchanged brown booths and pillowy bar stools, reminiscent of those in an old American diner, thousands of pastrami lovers have shared meals. The deli is a beacon for a Los Angeles past; for a time when people ventured out to eat a good ol’ sandwich rather than numerous small plates laden with exotic ingredients. And while Langer admits that the small plates trend has had a negative impact on the business, one of the greater challenges has been getting people to physically walk through the doors. Why go out for a sandwich when you can Netflix and order in? “[Currently], there’s this mindset of ‘we’re not coming to you, you need to come to me,’” Langer says, noting that people have been leaning more towards deliveries. If it was a problem before, it’s a problem no more. If customers want hot pastrami sandwiches delivered to their doors, then Langer, a man dedicated to his customers, shall deliver those hot pastrami sandwiches. “I’ve taken on five delivery services,” he says. “We do huge business with deliveries and I also started a curb side business.”

But while Langer is willing to accommodate certain trends and add an item or two to the menu, he’s not willing to fiddle with the food. “I’ve tried to the best of my ability to maintain what my dad started,” he says. “If it ain’t broke, don't fix it.” As more fancy and exotic restaurants sweep through cities, leaving less space for classics and traditional fare, Langer’s is a place that is consistent in everything it does. It’s a place that won't buckle in the face of the latest concepts, even if trends are telling it to.

Behind The Bib
Dining In 2 minutes